Is Mahomes-Kelce Becoming the Greatest Duo in NFL Playoff History? | The Analyst 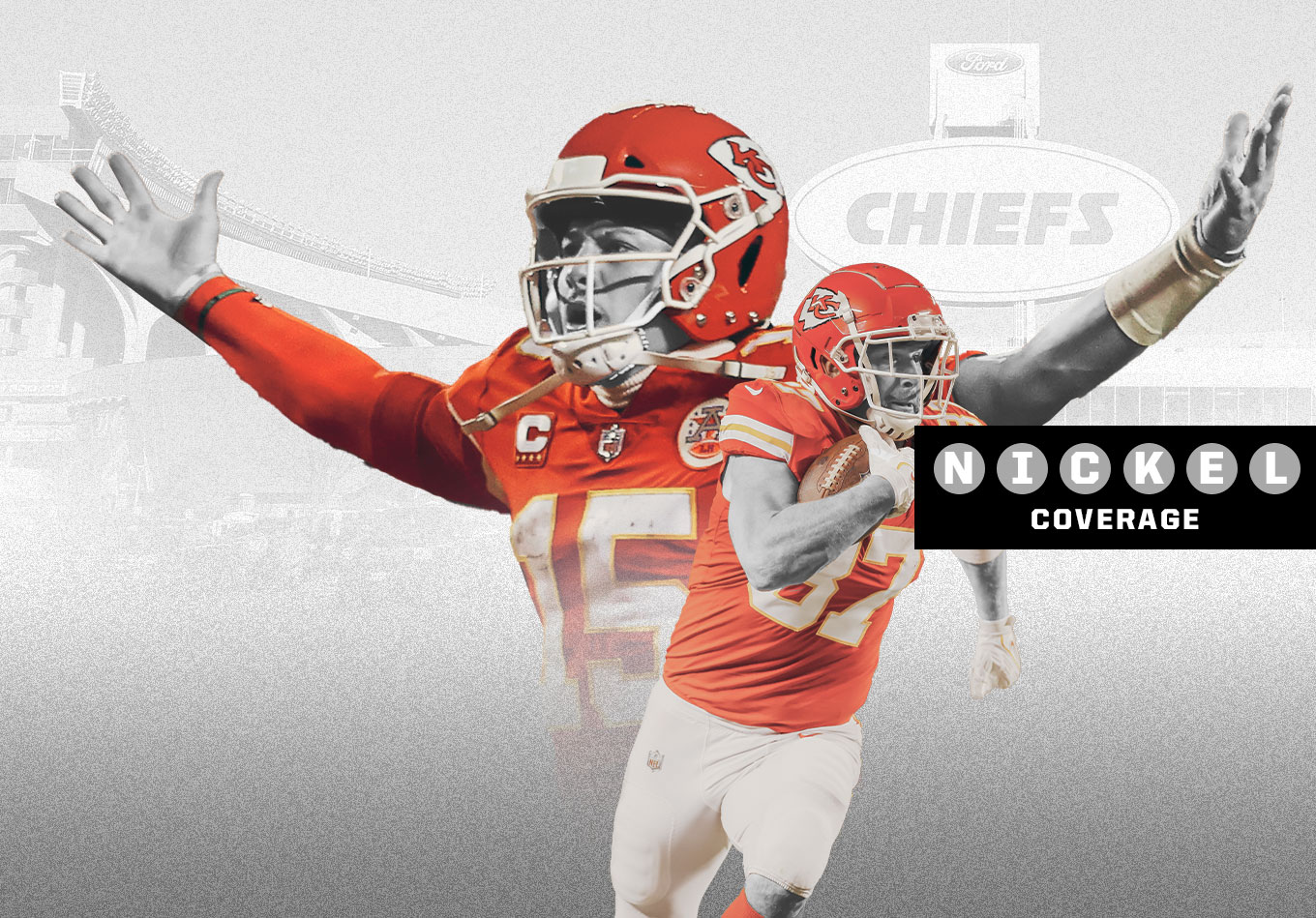 Is Mahomes-Kelce Becoming the Greatest Duo in NFL Playoff History?

The Buffalo Bills’ defense did not do a lot of things right at Arrowhead Stadium on Sunday.

But through close to four quarters of a staggering divisional round shootout with the Kansas City Chiefs, the Bills could at least claim to have done a good job of containing Travis Kelce.

Late in the fourth quarter, Kelce had just two catches to have gone for 10 yards or more, his longest gain a 21-yard reception on a scoring drive in the second quarter.

Then the Bills took the lead with 13 seconds to play but made the inexplicable decision to boot the resulting kickoff into the end zone, leaving Patrick Mahomes – after a well-designed short completion to Tyreek Hill – enough time to connect with a wide-open Kelce for a 25-yard catch and run that set up the game-tying field goal from Harrison Butker.

Having escaped defeat in regulation, the outcome was a foregone conclusion when the Chiefs won the coin toss to take possession first in overtime. The Bills never got the ball back and, while there will be plenty of back and forth about whether overtime rules are in need of amendment, the game was ultimately decided by Buffalo’s inability to prevent the connection between Mahomes and Kelce that is seemingly unstoppable in the biggest moments.

Jerick McKinnon and Byron Pringle each made significant plays on the game-winning drive, but it was predictably Kelce who made the adjustment to reel in Mahomes’ 8-yard pass to book a fourth successive home AFC championship game for the Chiefs, producing another defining moment for a quarterback-tight end duo whose playoff rapport stands among the best in postseason history.

Kelce’s decisive score marked the 10th time he has been on the receiving end of a Mahomes touchdown pass in the postseason. Going back to 1991, that number puts Mahomes and Kelce tied for second with Brett Favre and Antonio Freeman.

The only pair ahead of them is Tom Brady and Rob Gronkowski, who have combined for 15 postseason touchdowns over the course of their stints with the New England Patriots and the Tampa Bay Buccaneers.

Brady and Gronkowski have racked up those scores over the course of 11 seasons together. Mahomes and Kelce have reached 10 in just four.

In other words, with Kelce under contract through the 2025 season and the Chiefs’ dominance in the AFC showing no sign of abating, they are on course to shatter the mark of Brady and Gronkowski.

Mahomes’ completion percentage of 77.2 when throwing to Kelce in the playoffs is the 18th-best among quarterback and receiver duos with a minimum of 25 targets since 1991, but his passer rating of 137.6 targeting his tight end in the postseason is bettered only by Kurt Warner when throwing to Larry Fitzgerald (144.0) and Troy Aikman passing to Alvin Harper (143.5).

Those remarkable numbers seem destined to only grow more impressive, with Mahomes continuing to astound with his physical gifts and enduring improvisational brilliance and Kelce experiencing no drop-off in his abilities as a route-runner or after the catch.

There remains debate over the identity of the best all-round tight end in the NFL, but Kelce has an extremely strong claim for being the top route-runner in his position.

His burn percentage, which measures the frequency with which a receiver wins his matchup with a defender on a play where he is targeted, of 75.3 is second behind Dallas Goedert (77.3) among all tight ends with at least 50 targets this season.

That is an improvement on last season when Kelce (72.3) trailed only George Kittle (73.0) in the same metric.

Tied for fifth in burn yards per route (3.0) and sixth in burn yards per target (11.5) for tight ends (min. 50 targets) this season, Kelce’s success in consistently separating from his defender is a substantial reason why he leads all players at his position with 38 receiving plays of 25 yards or more since 2018, when Mahomes took over as the full-time starter in Kansas City.

Yet his elusiveness after the catch also plays a substantial role in his success in creating explosives. This season, Kelce averaged 6.1 yards after catch per reception, the fifth most in the NFL among tight ends. No player above him on the list had as many receptions as Kelce’s 92.

Adept at breaking free from coverage and averaging over half the yardage needed for a first down per reception after the catch, Kelce remains one of the most difficult skill position players in the NFL to slow down, and he’s a potential nightmare matchup for a Cincinnati Bengals defense ill-equipped for that challenge.

Although Cincinnati did an excellent job keeping the Tennessee Titans in check in their 19-16 victory on Saturday and Kelce only registered 25 yards receiving and a touchdown in the Chiefs’ Week 17 loss to the Bengals, an in-depth look at their defensive personnel indicates he should find plenty of joy against their linebackers and slot corner Mike Hilton.

Hilton played a key role versus the Titans, but Kelce is a mismatch for the former Pittsburgh Steeler, whose adjusted open-allowed percentage in man coverage of 39.2 is comfortably on the wrong side of the league average of 30.9 for cornerbacks.

He has fared slightly better in zone coverage, with an open percentage of 30.8, but linebacker Logan Wilson could find himself picked on by the Chiefs despite making a critical interception against Tennessee.

Wilson has allowed an open percentage of 38.4 in man, inferior to the league average of 30.9 for middle linebackers, that number increasing to 41.5 in zone.

The Bengals rely heavily on a Cover 3 zone (using it on 29.0% of snaps) and Tampa 2 (14.6%), meaning they will likely need a stellar performance from Wilson to ensure there is limited space for Kelce to exploit.

However, the Bills led the league in defensive EVE and yards allowed per play in the regular season. But with the season on the line, they could not stop Mahomes and Kelce from winning the game.

Even if the Bengals start strong on defense at Arrowhead, it may only serve to delay the inevitable.