On to the Next One: Where Do Everton Go From Here? | The Analyst 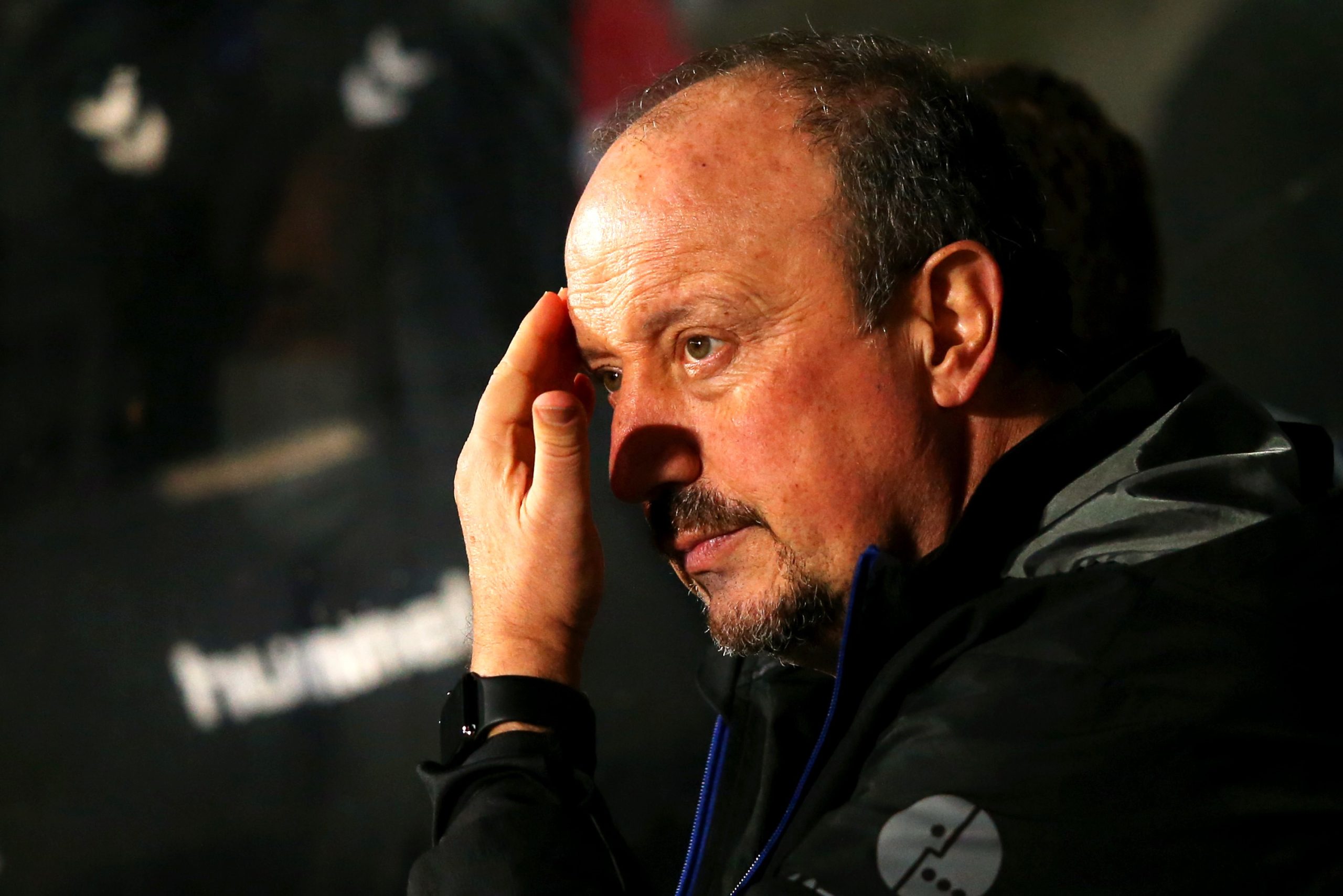 On to the Next One: Where Do Everton Go From Here?

The irony of Everton sacking Rafael Benitez on the day Carlo Ancelotti won the first trophy of his second Real Madrid stint was not lost on the Goodison Park faithful.

Ancelotti stunned Everton in June by leaving to return to Madrid. While there can be no comparison between Los Blancos when it comes to allure, it cut deep that a manager who seemed committed to a long-term project on Merseyside, had left at the first opportunity.

Not that Ancelotti’s 18 months at Everton had been a roaring success. His final game was a 5-0 drubbing at Manchester City – the heaviest defeat of the Italian’s managerial career, in his 1,167th match.

That result condemned Everton to a 10th-place finish. Just City and Manchester United won more away games last term in the Premier League, yet the Toffees suffered nine home defeats, with only the three relegated sides losing more on their own turf.

But there was a feeling that Everton might have enough to push on under Ancelotti, should reinforcements arrive.

Instead, it was former Liverpool boss Benitez, who had replaced Ancelotti for an ill-fated spell at Madrid in 2015, who arrived at Goodison.

An unpopular pick among the fanbase, the Spaniard was always starting from behind the eight-ball.

As was inevitable, the experiment failed. Benitez was sacked on Sunday after defeat at lowly Norwich City with Everton lingering six points above the bottom three after a run of one win in 13 league games (the club’s joint-worst Premier League run) and facing the prospect of hiring a sixth permanent manager since 2016-17.

From Benitez’s first news conference, it was clear that Everton, lavish spenders in recent years, were going to be cutting their cloth in line with tight financial limitations.

“You have to work in the context of having a director of football, the board, and financial restrictions,” he said after becoming only the second manager to take over Everton and Liverpool. “Talk the talk and walk the walk? I prefer to walk the walk.”

Only £1.7million was spent, but Everton started the league campaign brightly. Indeed, ahead of a mid-September meeting with Burnley, they had scored seven times, as many as they had in their last 10 games last term.

After a 1-1 draw with Manchester United at the start of October, Everton had 14 points from their seven Premier League games, the most since they had gone on to secure a fourth-place finish in the competition in 2004-05 (16).

14 – Everton have 14 points from their seven Premier League games this season; only in 2004-05 (16) have they had more after their opening seven matches in the competition, going on to achieve their best ever position in the table in the division that season (4th). Steam. pic.twitter.com/Jtp07G4ztm

Was that optimism built on solid foundations, though?

Benitez’s system was based on counter-attacking, with Everton happy to surrender possession. Only once before October had they had more than 50% of the ball (51.7% versus Burnley).

It is a trend that has continued, with Everton – who have had more possession than only three top-flight teams across the season – only seeing more of the ball than their opponents on three further occasions. In each of those games, they lost.

However, to be a counter-attacking team you must be solid, and Everton are not. They have shipped 34 goals, with only four teams having weaker defences, while 11 goals have been conceded from set-pieces, the second-worst figure in the league (Ancelotti’s team only allowed 10 from dead-ball situations in 2020-21).

But since Everton’s woeful run started with a 1-0 defeat to West Ham on 17th October, they have taken the lead just once – in a 5-2 home defeat to Watford. It is hard to sit back and play on the break if you are constantly chasing a game.

From October 17, Everton rank 18th for goals (11), 16th for shots on target (46), 12th for touches in the opposition box (259) and have the third-worst defence (27 goals conceded). They have an expected goals against (xGA) of 20.6 in that timeframe, the fourth highest in the division. Their position is in no way false.

Everton did play forward under Benitez (41.6% of their passes were in an attacking direction, up from 32.9% last season) but on only 86 occasions have they strung together an open play passing sequence of 10 or more passes – which ranks them 18th in the league – showing that the direction of their passes is likely to be based more on a direct style of play than under Ancelotti.

The bright sparks in that run have come from moments of inspiration. Demarai Gray’s stunning winner against Arsenal or Jordan Pickford’s display in the 1-1 draw away at Chelsea. Gray has been a standout performer, scoring all five of his Premier League goals following a ball carry – only Mohamed Salah can match that tally in the competition in 2021-22, while only Allan Saint-Maximin (24) has attempted more shots following carries than Gray (23).

Though injuries to key players such as Dominic Calvert-Lewin, Richarlison, Yerry Mina and Abdoulaye Doucoure must be taken into account, Benitez’s mantra became “I know what the fans want”, but he appeared to be talking the talk rather than walking the walk.

With Everton craving stability and unity, it is odd that owner Farhad Moshiri (more on him later) turned to Benitez, who was never the right pick to unite the fanbase or stabilise the club.

He has fallen out with owners, sporting directors and high-profile players at previous clubs and, indeed, his time at Everton proved no different.

Director of football Marcel Brands, who signed a contract extension in April, was moved on when Everton fans protested over the running of the club back in December, following a 4-1 defeat to Liverpool.

Evertonians’ worst nightmare had played out, their rivals singing Benitez’s name at Goodison after a humiliating defeat. It was the first time the Reds scored four goals in an away league derby since a 5-0 win in 1982, and Brands paid the price. His recruitment department followed, with director of medical services Dan Donachie having already left.

Everton offered their full backing to Benitez and five days later, claimed a vital win over Arsenal. But a cloud hung over that victory.

Since his arrival at Everton, Lucas Digne was second only to Liverpool’s Trent Alexander-Arnold for chances created by a Premier League defender (211). The France international had spoken openly of having been asked to play a more defensive role under Benitez, though behind the scenes matters appeared to boil over in a reported training-ground row.

Digne was dropped and did not return bar, for reasons known only to Benitez himself, to take a seat on the bench in a 3-2 defeat to Brighton and Hove Albion. The full-back received applause from the crowd when he warmed up but did not come on despite Everton needing an equaliser late on in a game in which they only made two changes.

Last week, Digne was sold to Aston Villa. The sale eases the financial issues but leaves Everton without their third-most creative player (22 chances created) in the league this term. Indeed, only Andros Townsend (2.1) has crafted more opportunities for them this season than Digne (1.7) per 90 minutes.

With Digne and James Rodriguez, who left for Qatar in September, gone and Gylfi Sigurdsson not involved, Everton are without all three of their leading creators from 2020-21.

Benitez leaves with an average of just a point per game at the club in league football, with only Mike Walker (0.87 points per game) performing worse in the Premier League era at Everton. His dismissal should have come sooner, it seemed pointless delaying the inevitable.

But for his faults, he is not the root cause of Everton’s issues and owner Moshiri and chairman Bill Kenwright must look in the mirror.

Since Moshiri took over in 2016, Everton have recorded 1.37 points per game, ranking them 10th in the league, but a vast amount of investment has been made. So, what next?

Roberto Martinez, who was sacked in 2016, is reportedly a leading candidate. The Belgium boss won 21 Premier League games in his first season in charge at Everton, guiding them to a record points total of 72, but he won just 22 games combined across the next two years.

Lucien Favre has also been mooted. He averaged 2.08 points per game at Borussia Dortmund, a figure bettered by only Thomas Tuchel (2.09) and new boss Marco Rose (2.11), while the Swiss led the club to their third-best Bundesliga points tally in 2017-18. He could provide experience and a modern approach.

Graham Potter seems to have ruled himself out. Wayne Rooney is doing terrific work at Derby County, might he be an option?

For now, though, Everton’s immediate focus must be on avoiding a relegation scrap.

Duncan Ferguson, who remained unbeaten in the league in his spell in charge prior to Ancelotti’s arrival, seems a logical pick to take over on a temporary basis, with Villa visiting Goodison on Saturday, to perhaps provide some of the spark missing during Benitez’s doomed tenure and buy Everton time to make the right choice.

With just 19 points from the first half of the season, their lowest tally at the halfway stage of a season since 2005-06 (17), Everton cannot afford to get this appointment wrong, too.