Does Big Ben’s Exit Close the Window on the Steelers’ Stellar Run? | The Analyst 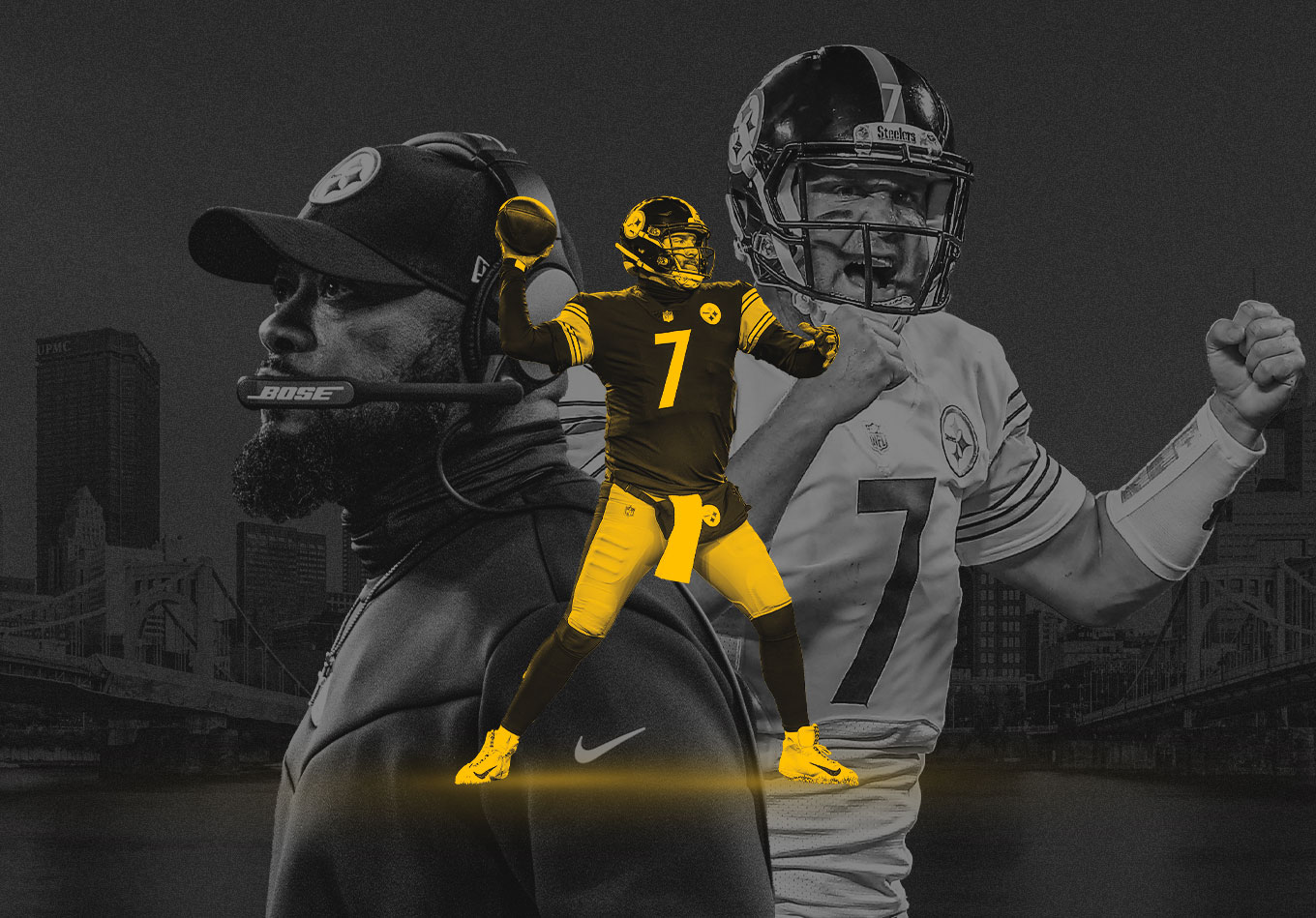 Does Big Ben’s Exit Close the Window on the Steelers’ Stellar Run?

Ben Roethlisberger wasn’t supposed to start for the Pittsburgh Steelers as a rookie in 2004, but there he was in Week 2, trotting onto the field in the third quarter in Baltimore to relieve an injured Tommy Maddox.

Big Ben threw three fourth-quarter touchdown passes, but the optimism that came with the first two quickly fizzled when the third landed in the hands of Ravens cornerback Chris McAlister, who took it 51 yards to the house to seal a 30-13 Baltimore victory.

“I’m not Tommy Maddox. Can’t be Tommy Maddox,” Roethlisberger said at the time. “I’m just going to do the best that I can.”

He was right in more ways than one. He wasn’t Maddox, and the best he could do meant being the most accomplished quarterback in the history of one of the league’s storied teams.

In 2004, that meant not losing again until the AFC championship game and posting a franchise-best 15-1 regular season record before bowing out against the eventual Super Bowl champion New England Patriots. For perhaps the first time since their second title repeat in the 70s, the Steelers finally had a quarterback capable of carrying the franchise the way its defense so often did.

Roethlisberger was a caretaker at first, a gunslinger later and, like so many athletes toward the end, a shell of himself at last. In the first half of his career, he could extend plays in the pocket better than nearly anyone who ever lined up under center.

By 2020, Big Ben was getting rid of the ball faster than anyone since 2016 – he also has the fastest average release time this season.

Roethlisberger won 10 playoff games in the first seven years of his career, twice lifting the Lombardi Trophy and losing to Aaron Rodgers of the Green Bay Packers once more on the NFL’s biggest stage. He’s only won three over the last 11 seasons, and it’s at least worth mentioning that the QBs on the other side of those victories were AJ McCarron, Matt Moore and Alex Smith.

He played catch-up from the kick in his last two postseason starts thanks to defenses that disappeared faster than the final Primanti Brothers sandwich at a corporate retreat of Heinz employees, throwing for 970 yards and nine TDs (Joe Burrow nods in approval), only to lose to … Blake Bortles and Baker Mayfield.

Long ago having surpassed Terry Bradshaw as the Steelers’ best signal caller, a no-doubt Hall of Famer and – depending on how many Iron Cities you’ve tipped back at your local pub – one of the 10 or 12 finest passers to ever lace ‘em up, Big Ben is likely days away from confusing his final camera operator with his patented pump fake.

Roethlisberger all but confirmed prior to Week 17 that Monday night’s game against Cleveland would be his last at Heinz Field, and he sure looked ready to walk away after Pittsburgh’s 26-14 victory in which he averaged an almost unfathomable 2.67 yards per pass attempt. That’s the second-lowest mark for anyone who’s ever attempted at least 40 passes, though the guy that holds that dubious low (2.56) is doing just fine for himself these days.

What did the win over the Browns accomplish? Well, it slightly elevated the Steelers’ playoff chances. Pittsburgh still needs a win over the Ravens, an Indianapolis Colts loss in Jacksonville, the Las Vegas Raiders and Los Angeles Chargers to not tie on Sunday Night Football, and the official blessing of Snoop Dogg in order to sneak in as the AFC’s seventh seed.

Even if Roethlisberger doesn’t rally the troops in Baltimore while the Jaguars shock the Colts, the Monday night victory extended Pittsburgh’s impressive streak for another year. At 8-7-1, the Steelers have now gone 18 straight seasons – Big Ben’s entire career – without finishing below .500.

How rare is that nearly two-decade long run?

The Steelers were 7-8 in Roethlisberger’s 15 starts in 2006, the season after he was badly injured in a motorcycle accident, but he started a personal streak of .500 or better football in 2007. That came to an inauspicious end two games into 2018, when he suffered a season-ending elbow-injury early in Pittsburgh’s second straight loss to open the season.

Throw that one out and he’d be at 14, but even that 12-season streak puts him in impressive company.

Roethlisberger began his 12-season streak the year Mike Tomlin took over after Bill Cowher’s retirement, and those two have combined for 135 wins, tied for the second-highest total in NFL history for a coach and starting QB combo.

They’re not going to catch Brady and Bill Belichick (219) – maybe no one ever will – but with a win in Baltimore, the Roethlisberger-Tomlin combo can surpass Sean Payton and Drew Brees for sole possession of No. 2 on the all-time list.

Nearly 30% of those required some late heroics, which is one of the biggest parts of Roethlisberger’s legacy. Only Manning and Brady engineered more fourth-quarter comebacks in their careers than No. 7.

If Roethlisberger does walk off into the sunset, is this it for the Steelers’ long run without a losing season? Considering ESPN’s QBR had him SOMT (South of Mitchell Trubisky) in 2020 and BDJ (Below Daniel Jones) in 2021, it’s not like we’ve been seeing the vintage version of a once-great passer these last few seasons.

Pittsburgh’s roster is one that has some top-level, All-Pro-caliber playmakers (T.J. Watt, Cameron Heyward, Diontae Johnson and Minkah Fitzpatrick) but lacks depth on both lines and in the back seven of its defense.

If Big Ben exits, the Steelers should have north of $40 million in cap space this offseason to plug some holes, though veteran QBs should be available via free agency (Jameis Winston, Teddy Bridgewater) or trade (Russell Wilson, Aaron Rodgers, Jimmy Garoppolo, Derek Carr) that could eat up a good chunk of that room.

In reality, it’s probably best to shore up the porous offensive front via the draft and free agency, take a QB in the first two rounds for the first time since 2004, and roll with either a cheaper veteran or suffer through a few games of Mason Rudolph before giving way to the rookie.

That might mean a rare rebuild in the Steel City, where the foundation has almost always been strong since the days of Chuck Noll. With the win over the Browns, Tomlin accomplished something that neither Noll, Cowher nor any other coach in NFL history could – beginning a career with 15 straight non-losing seasons.

But much of that success is owed largely to the decision to use the Steelers’ second-highest draft pick since 1992 on a quarterback from the MAC. After all, Pittsburgh’s front office was apparently ready to take Arkansas tackle Shawn Andrews with the 11th pick in the 2004 draft before owner Dan Rooney stepped in and suggested Roethlisberger.

Andrews wouldn’t have been the worst pick in the world. He started 57 games and made two Pro Bowls over seven NFL seasons in a career that was cut short by injuries.

Roethlisberger, though, gave Pittsburgh a new identity. For the first time since the days of Bradshaw, Swann and Stallworth, the Steelers could consistently win through the air instead of on the ground or with a ferocious defense. It took a while to fully unleash him, but from 2013 to 2018, only Brees averaged more passing yards per game than Big Ben’s 296.1.

Eventually, the things we come to rely on the most finally break down. As the clock strikes midnight on Roethlisberger’s career, he’ll leave behind a legacy that won’t be easy to quickly replace – even  for a franchise that rings the victory bell as consistently as the Steelers.