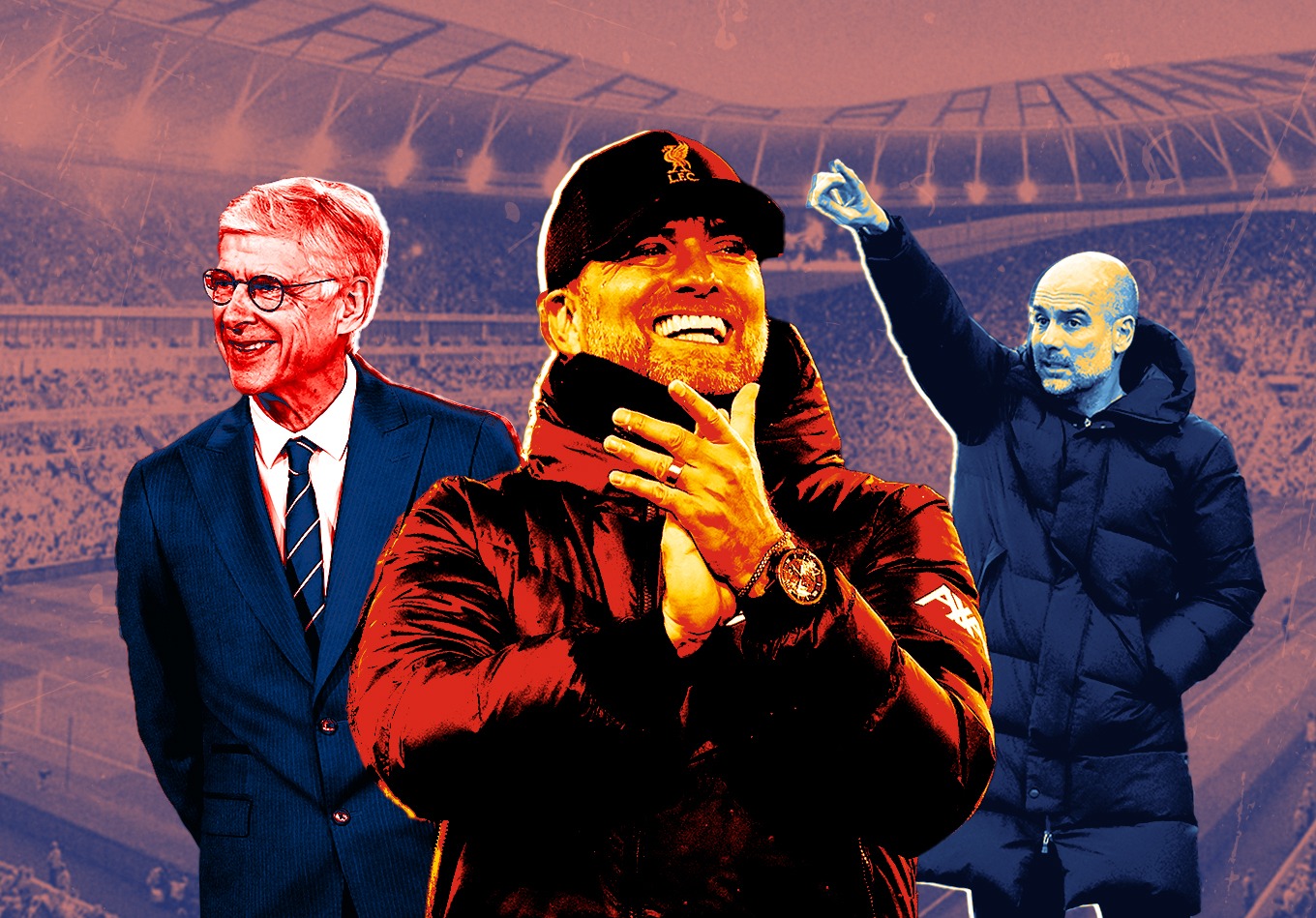 There have only been 10 instances of teams going 30+ games unbeaten in English top-flight league history, of which five have come in the Premier League era. We look back over each of them below.

The longest unbeaten run in English top-flight history is held by Arsenal between May 2003 and October 2004, with Arsène Wenger’s Gunners side going a ridiculous 49 matches without a Premier League defeat.

38 of these 49 games came in a single season, as Arsenal’s ‘Invincibles’ went an entire season without defeat – the only Premier League team to ever do so – with a record of 24 wins and 12 draws.

When Arsenal defeated Southampton 6-1 at Highbury in May 2003, little did fans know that they were seeing the start of something special.

That emphatic win saw a rare occurrence itself, with both Jermaine Pennant and Robert Pires scoring hat-tricks in the game for the Gunners – up until October 2019, the only occasion that two players had scored trebles for the same team in a Premier League match (Jamie Vardy and Ayoze Pérez replicated this in Leicester’s 9-0 away win, also against Southampton).

Arsenal’s run eventually came to an end at Old Trafford in a 2-0 defeat to Manchester United on Oct. 24, 2004 in a match that had huge ramifications for the 2004-05 title. Goals from Ruud van Nistelrooy and Wayne Rooney in the final 17 minutes sealed the victory for United in a match that was tagged as the ‘Battle of the Buffet’ after it was alleged that a brawl between the players took place at the end, with a slice of pizza hitting Sir Alex Ferguson’s head. It was also alleged that Arsenal players wore shirts underneath their kit with “50 not out” printed on.

Arsenal’s form stuttered following this defeat, dropping nine points in their following five games and eventually losing out to Chelsea for the title by 12 points in José Mourinho’s first season with the Blues.

Not only were Liverpool 44 games unbeaten when they travelled to Vicarage Road to face Nigel Pearson’s Watford, they had won their last 18 matches in a row and were looking to break the all-time English top-flight record with a victory in this encounter. As it happened, they were left shell-shocked by a phenomenal display from the Hornets.

Ahead of this game, Liverpool held a 22-point lead at the top of the Premier League with a record of 26 wins and one draw, while Watford were second-from-bottom and a point from safety. In one of the biggest shocks in Premier League history, Watford won 3-0 thanks to goals from Ismaïla Sarr (2) and Troy Deeney.

Across Liverpool’s 44-game unbeaten Premier League run, they dropped just 10 of a possible 132 points and averaged 2.77 points per game. Only two players played in every single match during this run: Andrew Robertson and Virgil van Dijk, with the latter starting all 44.

Despite this defeat – and the eventual three month break due to the Covid-19 pandemic – Liverpool still went on to win the Premier League title for the first time, finishing on 99 points and setting the English top-flight record for the earliest title win in a season, doing so with seven matches remaining.

Following a 1-0 away defeat to Manchester City on October 16 – José Mourinho’s first loss during his reign at Stamford Bridge – Chelsea went unbeaten for the remaining 29 games of 2004-05 and then the first 11 of 2005-06. That start to 2005-06 also saw them open the Premier League campaign with nine successive victories, which is the best start to a Premier League season by any side.

The key to Mourinho’s early success during his Premier League managerial career was Chelsea’s mean defensive record. Across their 40-game unbeaten run, Chelsea conceded just 19 goals overall and kept 24 clean sheets. However, that’s not to say they couldn’t entertain in attack either, with the Blues averaging 2.3 goals per game across this stretch.

Just like Arsenal a year earlier, Chelsea’s unbeaten run fell at the hands of Man Utd at Old Trafford. The Red Devils enjoyed a 1-0 win over Mourinho’s side thanks to Darren Fletcher’s first-half header on the 19th anniversary of Sir Alex Ferguson’s appointment as United boss.

Chelsea didn’t let this defeat affect them too much, however, as they went on to win their following 10 Premier League matches in succession and conceded just four goals.

Before Arsenal’s record-breaking 49-game unbeaten run in the Premier League, they had set a new club record 30 games without a defeat in between December 2001 and October 2002.

Starting just before Christmas 2001 with a 2-1 away win at Anfield against Liverpool, the Gunners secured 25 wins and five draws over the 30 games, with the 21-game unbeaten run at the end of 2001-02 helping them secure the Premier League title over Liverpool by seven points.

Their run of 30 games unbeaten came to an end with a 2-1 defeat at Goodison Park to Everton on Oct. 19, 2002, before losing again the following Saturday at home to Blackburn Rovers by the same score – one of only two home defeats in league competition across just over three years.

Arsène Wenger is still the only manager in Premier League history to have secured two unbeaten runs of 30+ games.

Man City ended the 2016-17 Premier League season in strong form, with an eight-game unbeaten run (W6 D2), before carrying through that form into 2017-18 with a 22-game unbeaten start in which they dropped just four points (W20 D2).

City’s unbeaten run was finally ended by Liverpool at Anfield in a brilliant 4-3 win for the Reds, but this was one of only two defeats and six games that they failed to win in 2017-18, as Pep Guardiola’s side became the first team in English top-flight league history to secure 100 points in a single season.

But of course, football didn’t begin in 1992. We’ve given you the five longest unbeaten runs in Premier League history, but what about the other runs of 30 matches or longer in English top-flight history?

Any Nottingham Forest supporter who witnessed a 0-0 home draw with West Bromwich Albion on Nov. 26, 1977 would have been forgiven for not believing they wouldn’t lose a game again for over a year – especially after losing two of their previous three matches.

That draw with WBA was their 17th game of the 1977-78 season and they didn’t suffer another defeat, as Brian Clough led them to their first (and so far, only) top-flight English league title.

Ironically, it was in their 17th game of the following season that Forest’s 42-game unbeaten run finally came to an end, losing 2-0 away at Liverpool on December 9, 1978. That result was to prove pivotal, as Liverpool eventually pipped Forest to the title by eight points in 1978-79.

Leeds United went 34 matches unbeaten under the management of Don Revie between October 1968 an August 1969, but few would have expected such a long run considering how it began.

After losing 5-1 away at Burnley on October 19, Leeds drew three consecutive games 0-0 to start their unbeaten sequence. 28 of these matches came in the 1968-69 season and saw Leeds pick up their first top-flight league title, before continuing the run in the first six games of 1969-70.

Their 1968-69 title win saw them pick up 67 points overall, which was the most at that time in the two-points-for-a-win era (and eventually bettered only by Liverpool in 1978-79), while they only conceded 26 goals: the third fewest of any title winner in a 42-game season.

During their 34-game unbeaten streak, the Whites conceded just 16 goals and only on one occasion did they allow the opposition to score more than once.

The run eventually came to an end on Aug. 30, 1969 in a 3-2 defeat to Everton at Goodison Park, but they went on to go unbeaten for another 18 games after this loss. Unfortunately for Leeds, they could only finish second in the table come the end of the campaign, losing out to Everton by nine points.

Following a miserable run of form that saw them lose five times in the space of seven top-flight league games, Liverpool lost out to rivals Everton in the 1986-87 Division One title race.

Kenny Dalglish’s side ended the season well, though, with a 1-0 win against Watford and a 3-3 away draw at Chelsea. These two matches began a sequence of 31 matches without a loss, including the opening 29 of the 1987-88 campaign.

With 22 wins and seven draws, Liverpool built an unassailable lead at the top of Division One and eventually went on to win the title by nine points ahead of Manchester United.

This unbeaten run came to an end with a 1-0 away defeat at reigning champions Everton on March 20, but it would be one of only two defeats in the 1987-88 league season.

Burnley enjoyed their club record 30-match unbeaten run within the English top-flight back in the 1920-21 season, with a period of six months without a single loss. Astonishingly, this came following a four-match losing streak, with three of those coming in the opening three games of the campaign.

In fact, in losing their first three games of the 1920-21 season and winning the English top-flight title in the same season, Burnley became only the second (after Liverpool in 1905-06) and last team to achieve such a feat.

Their unbeaten run came to an end in the 34th game of the season, in a 3-0 away defeat to Manchester City on March 26. Maybe tiredness was to blame, as they’d only played Manchester United a day earlier on March 25, winning that game 1-0.

Burnley still went on to win the Division One title – their first top-flight league win – despite winning only two of their final nine league games to the season.

Leeds United ended the 1972-73 season with an emphatic 6-1 victory over Arsenal at home, and then carried that form through to the 1973-74 campaign. Interestingly, this unbeaten run began sandwiched between defeats in two cup finals: in the FA Cup vs. Sunderland and against Milan in the UEFA Cup Winners Cup.

The Whites remained unbeaten in their opening 29 games of the following season under the legendary Don Revie, winning 19 and drawing 10. In winning their first seven league games of 1973-74, Leeds became only the fifth top-flight team to do this at the time.

Despite the end of the unbeaten run – a 3-2 loss to Stoke City on February 23 – starting a spell of just one win in seven league games, of which they lost four, Leeds still went on to win the 1973-74 top-flight title.