Cover 5: The Week 16 Games That Could Decide Four NFL Divisions | The Analyst 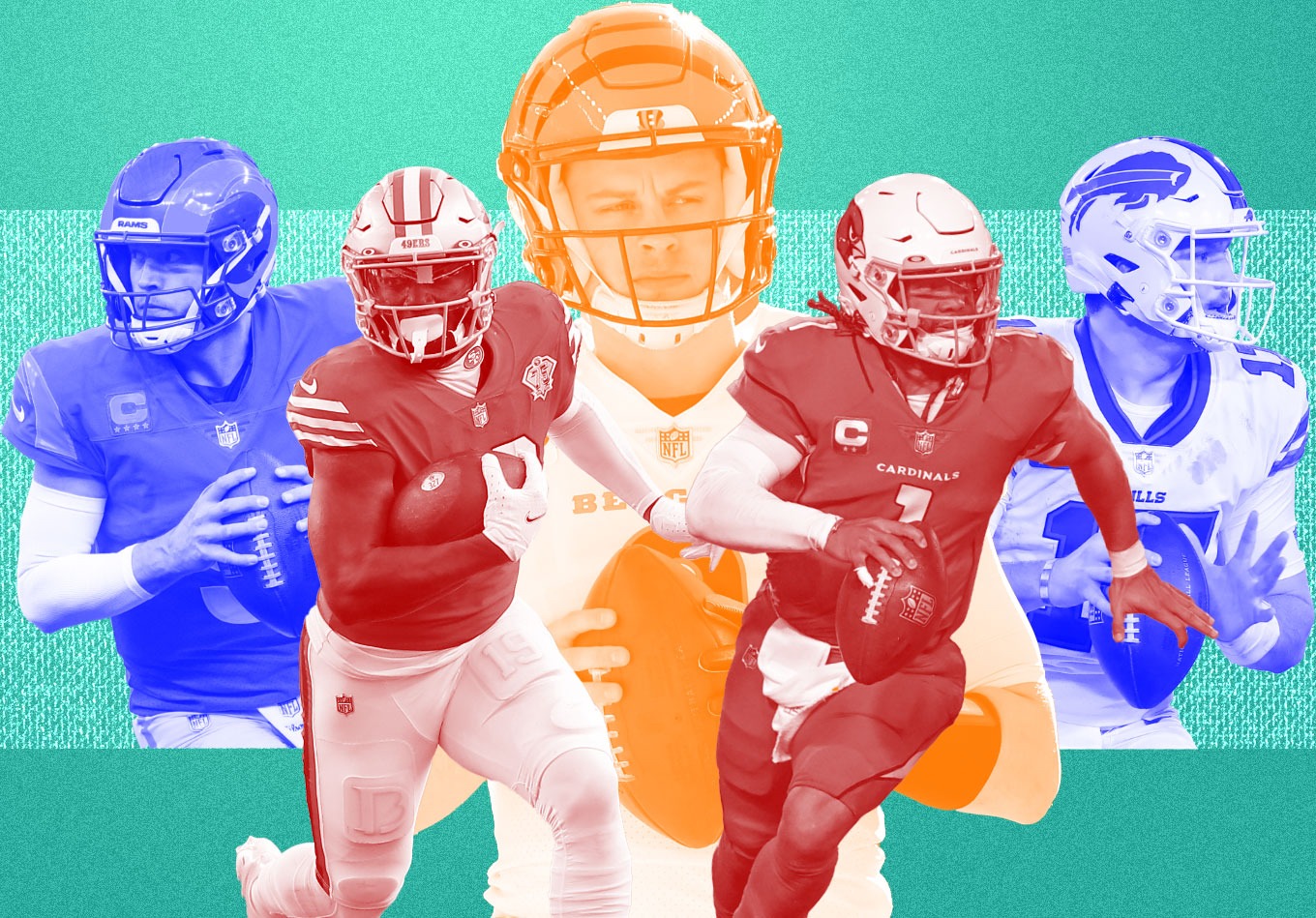 Cover 5: The Week 16 Games That Could Decide Four NFL Divisions

There are three weeks left in this NFL season and only one team has clinched a playoff spot.

That about sums up the wackiness of this 2021 campaign, one that’s been made even more chaotic by widespread COVID-19 outbreaks that wreaked havoc on the Week 15 schedule.

We do know the Green Bay Packers will be hosting a playoff game come January, and the Dallas Cowboys, Tampa Bay Buccaneers and Kansas City Chiefs are all on the verge of wrapping up their respective divisions as the holidays approach.

The races in half of the league’s eight divisions remain very tight, though, especially in a jumbled AFC that has an astounding 13 of its 16 teams still within a game of a playoff spot.

With so little separation, it’s no surprise that this week’s schedule is inundated with games of high importance. Five particularly stand out due to the impact they’ll have on the four divisions (AFC East, North and South; NFC West) that are all very much up for grabs heading into the stretch run.

Here’s a breakdown of how things currently stand in those division races, as well as what to look for in the games involving the top contenders in each.

How Things Stand: Tennessee (9-4) holds a diminishing one-game lead over Indianapolis (8-6). The Titans do hold the tie-breaker on the Colts after sweeping the season series.

The Titans are limping into the stretch run with losses in three of their last four games, which has enabled the surging Colts to climb back into the division race. Turnovers have been at the heart of their present struggles, as they’ve had four or more giveaways in each of those last three defeats.

Both of these teams want to turn this game into a ground-fest, as each calls run on about 45% of their total offensive plays – among the highest ratios in the league. But the 49ers are very tough to run on, especially when they know it’s coming. San Francisco is allowing 0.572 yards under expected on rush attempts in expected run situations, the ninth-lowest mark in the NFL according to our EVE (Efficiency vs. Expected) model.

Tennessee will surely need Tannehill to break out of his recent slump to have its best chance, and maybe any chance with the way the 49ers have been playing. The veteran quarterback has posted a subpar 66.5 passer rating while averaging an anemic 5.6 yards per attempt over the past four weeks, with a pickable pass percentage (6.72) more than double of what he had over the Titans’ first 10 games (3.28).

Getting A.J. Brown back from a three-game absence should help Tannehill’s cause. Brown’s open percentage of 48.9% in individual matchups is the fifth highest of any receiver with at least 50 such routes this season.

Key Stat: Jonathan Taylor has an NFL-best eight games with 100 or more rushing yards this season. The Colts are 8-0 in those contests and 0-6 when he’s failed to hit that number.

This is a far more intriguing matchup now than it may have been in October, when the Colts were floundering and the Cardinals were ripping off win after win. Much has changed since, as Arizona has gone 3-4 following a 7-0 start and Indianapolis has engineered an impressive turnaround with seven wins in nine games.

Turnovers have played a major part in the Colts’ resurgence, as they’ve recorded 14 interceptions and a league-high 22 takeaways during that nine-game run. Only once during that stretch has Indianapolis failed to record multiple turnovers.

Indy’s opportunistic secondary presents a challenge for Murray, who’s been unable to recapture his stellar early-season form that established him as a much-too-early MVP front-runner. The former Heisman Trophy winner had the second-highest well-thrown percentage (82.8) among qualifying quarterbacks (100 or more attempts) during the Cards’ 7-0 start, but that number has dipped to 75.9% over his last four games.

More concerning is Murray’s pickable pass percentage of 5.26 in those last four starts, a considerable rise from his first seven (3.35). Half of his 10 interceptions this season have come in Arizona’s three losses.

This could be a do-or-die game regarding the Colts’ chances of winning the division, depending on how the Titans fare on Thursday. Should Tennessee win, it would clinch the AFC South with an Indianapolis loss.

How Things Stand: Arizona (10-4) and the Los Angeles Rams (10-4) are tied for first place with the Cardinals holding the tiebreaker by virtue of a better record within the division. The teams have split their two 2021 meetings.

This could be one of the most exciting matchups on Sunday’s docket, as well as among its most significant with the importance it carries on both sides. Minnesota enters the week clinging to the NFC’s final wild card spot, but will be challenged to hold it with a visit to Green Bay to follow its clash with the powerful Rams.

Credit Mike Zimmer for not only keeping Minnesota in the race with four wins in its last six games, but for getting the Vikings’ defense to retain some bite after losing its two best edge rushers in Everson Griffen and Danielle Hunter. Unheralded players, most notably Armon Watts and D.J. Wonnum, have stepped up to fill the voids and keep the Vikings among the league’s better pass-rushing units. Wonnum’s 17.8% pressure rate since Griffen was put on the NFI list is above the league average for edge rushers since Week 12, while Watts has registered a sensational 23.9% pressure rate over his last four games.

The Rams, our No. 1 ranked team in EVE, are a tough out for any opponent but are more vulnerable against teams capable of getting constant heat on the quarterback. Matthew Stafford owns a low pickable pass percentage of 2.60 when having a clean pocket, but that number rises sharply when under pressure. Stafford’s PPP of 7.02 when pressured ranks 19th of 25 quarterbacks with at least 75 attempts under duress.

Nine of Los Angeles’ 15 giveaways this season have come in its four losses, with the Rams possessing a poor minus-7 turnover ratio in those defeats.

Hurrying Stafford isn’t at all easy, though, as the Rams have consistently stood above our pass protection rankings with an offensive line that’s won 82.4% of individual matchups for the season.

How Things Stand: New England (9-5) holds a one-game lead over Buffalo (8-6) and has won the one previous meeting between the teams this season.

Key Stat: All 15 of the Bills’ regular-season wins since Week 9 of the 2020 season have come by double digits. That’s the second-longest streak of victories by 10 or more points in NFL history, behind the Bears’ 20 straight from 1941-42.

These longtime rivals squared off earlier this month in one of the more notable games of the season, memorable only because the Pats threw the ball a mere three times while grinding out a 14-10 win in Buffalo. Difficult weather conditions played a major role in the outcome that night, as blustery winds rendered the Bills’ pass-centric offense ineffective and allowed New England to dictate terms on both sides of the ball.

The Patriots weren’t able to do that a week ago as they fell behind 14-0 against the Colts in the first quarter and couldn’t prevent Indianapolis’ potent ground attack from running at will. That forced rookie quarterback Mac Jones to throw more than desired and resulted in a 27-17 loss that halted New England’s seven-game winning streak.

Buffalo would love to utilize a similar game plan but really isn’t built to deploy it, at least not to the extent the Colts did. While Indianapolis leads the NFL in yards over expected on running plays with runs expected, the Bills are 13th in that category with a slightly positive overall figure but possess one of the league’s weakest run-blocking units. They tried to run on the Pats back in Week 13 but never found any sustained success.

Now, a big reason why the Bills couldn’t run effectively that night is because they couldn’t throw it either. Allen completed only half of his 30 pass attempts in the swirling winds and averaged a meager 4.8 yards per throw, both season lows.

Those numbers will almost surely improve simply because the weather forecast for Sunday isn’t as fierce as the first meeting, and the Bills will undoubtedly need more out of their franchise quarterback in a game they must win to keep their division title hopes alive. Buffalo is 3-4 over its last seven games, winning all three in which Allen’s passer rating ended above 90 and losing all four when it’s been below that mark.

How Things Stand: Cincinnati (8-6) and Baltimore (8-6) are tied for first place with only one game separating all four division members, as Pittsburgh (7-6-1) and Cleveland (7-7) remain squarely in the hunt. The Bengals won in Baltimore in their lone previous meeting with the Ravens this season.

Key Stat: Both the Ravens and Bengals have had seven games decided by five points or fewer this season, tied with Cleveland and Minnesota for the most in the NFL. Baltimore is 4-3 in such games, Cincinnati is 3-4.

Though this division looks destined to come down to the season’s final week, the winner of this showdown would be squarely in the driver’s seat. That’s especially true in the case of the Bengals, who would improve to 4-1 against the AFC North with a victory with a season sweep of Baltimore.

While the pregame focus has been centered around whether Ravens quarterback Lamar Jackson will return from a one-game absence caused by a sprained ankle, the bigger concern for John Harbaugh may be who’s available on the back end of his defense. Baltimore comes in ranked 29th overall in passing yards allowed vs. expected with a secondary that’s been decimated by injuries and COVID-19 diagnoses.

Already without top cornerbacks Marlon Humphrey and Marcus Peters as well as starting safety DeShon Elliott, the Ravens also played last week’s game against the dangerous Packers down safety Chuck Clark and corner Jimmy Smith before seeing slot corner Tavon Young exit with a concussion. To no surprise, Baltimore was mostly powerless to defend Aaron Rodgers in a 31-30 loss it narrowly avoided due to a superb stand-in job from Tyler Huntley in place of Jackson.

It’s unclear if the Ravens will get any of those players back this week, and that could present a major problem against a Cincinnati offense that torched Baltimore for 520 total yards in a 41-17 blowout win in Week 7.

The Bengals have the weapons to exploit the Ravens’ lack of secondary depth, like they did in the previous meeting with Burrow throwing for a career-high 416 yards and three touchdowns and rookie sensation Ja’Marr Chase racking up 201 yards and eight catches.

Baltimore’s pass rush has been largely underwhelming as well, ranking 23rd overall in individual win percentage. It’s also a defense that often needs to bring extra attackers to generate pressure, and we discussed last week how adept Burrow has been in handling the blitz.

This looks like another tough spot for a Ravens team saddled with a three-game losing streak, though the same was said last week in a game they were a missed two-point conversion try away from winning as a heavy underdog. Baltimore’s greatest asset has been its resiliency, having shown on several occasions it’s a team that can’t be counted out.