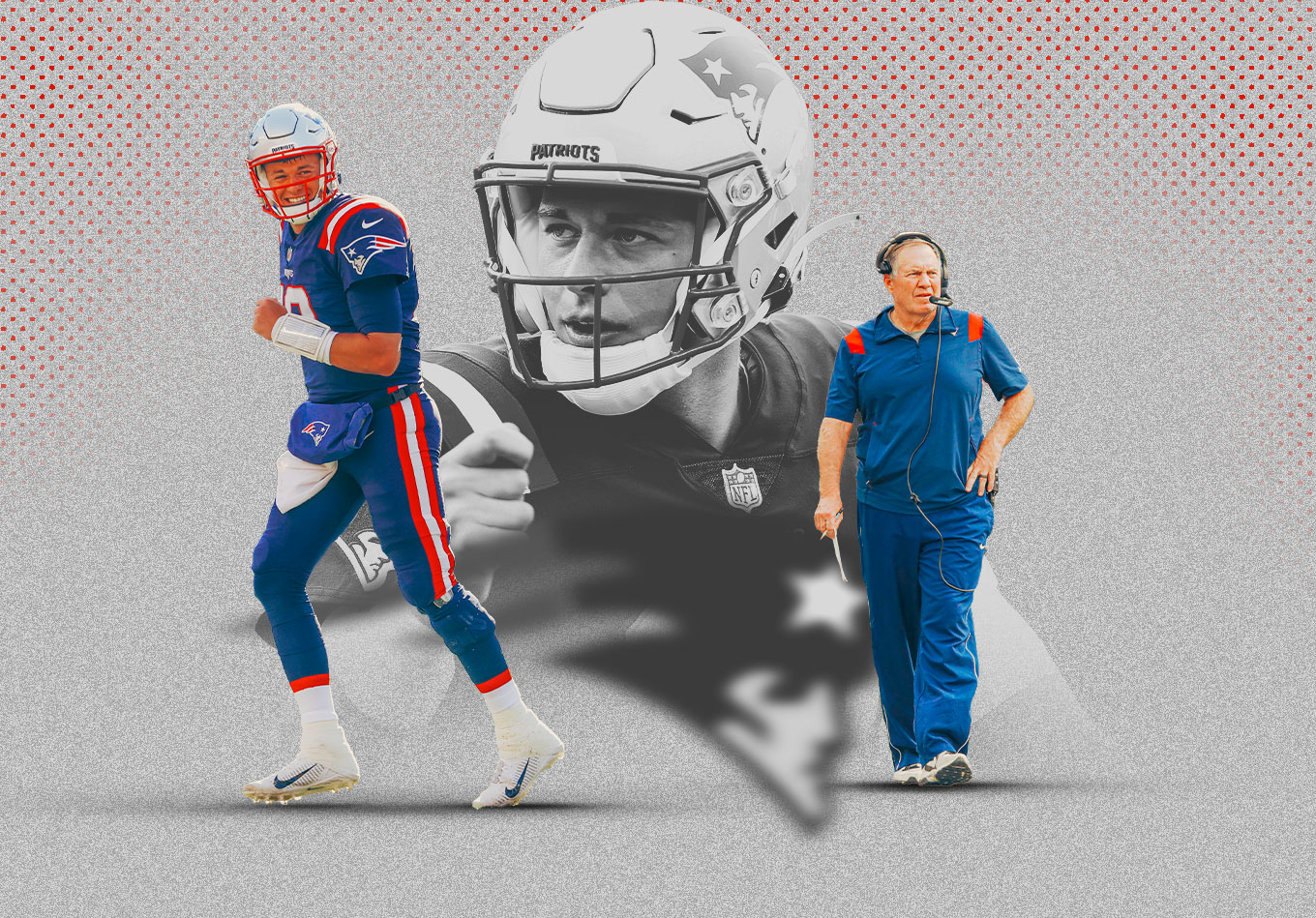 Has New England Found the Next Brady or Is Mac Merely a Product of Where He Landed?

Mac Jones has looked like the best rookie quarterback this year, helping the Patriots get back on top in the AFC after a rare down year. But what is his long-term outlook? Will he become the next great QB in New England? We’re breaking down the film in search of the answer.

Despite throwing just three pass attempts in a snowstorm on Monday Night Football, a game there is little to take away from the quarterback play, Mac Jones has otherwise had strong showings throughout the year.

On the season thus far, Jones has thrown for over 2,800 yards, 16 touchdowns, and eight interceptions for the Josh McDaniels-led New England Patriots offense. He is completing 70.3% of his passes and ranks eighth in the NFL in well-thrown percentage (81.2) among those with at least 200 attempts. But his 7.67 air yards per attempt rank fifth among that group.

The marriage between team and player has clearly hit its stride in Foxboro, and there’s plenty of evidence on tape as to why.

The draw to Jones’ game coming out of Alabama was his ability to get his eyes in the right spot and to be on point as far as accuracy is concerned in the short to intermediate levels of the field. This has translated to the NFL level as well as Jones has found a great deal of success in these same phases of the game.

Jones is smart – he wins with wit. Pre-snap, he’s more than keen to use the resources at his disposal (pre-snap motion, etc.) to know what he is facing and where his eyes should be heading. When he’s not forced to move his eyes, Jones plays the game at a high level.

It’s a pleasure to watch Jones operate pre-snap and take full control of the Patriots’ offense. He’s obviously not the most physically gifted quarterback in the world. Both his arm and mobility are lacking top-end gears. However, Jones mitigates some of those worries with how efficiently he gets the ball out and how well he sets himself up for success.

Sure, his performance takes a hit when he has to move his eyes, but what young quarterback doesn’t experience a slight drop in play? In fact, against the Cleveland Browns a few weeks ago, Jones did have a heavy dose of first-read throws and manufactured plays (i.e. screens). But while Jones did take two sacks when forced to move to his second read, he still managed to go 7 for 11 with a touchdown when moving his eyes off his first read.

Knowing where to go with the football is one thing but getting the ball there on time and with accuracy is another thing. Again, while Jones does not have the ability to drive footballs into tight windows the way that his predecessor Tom Brady could (and still can for what it is worth), Jones has found a way to stay on time and throw with anticipation to put the ball on his receivers before defensive backs can get their heads around.

Against the Atlanta Falcons, Jones managed the game to a victory, but when he was asked to make a big play, he found a way. Hitting his tight end Hunter Henry down the field, Jones threw the football in this clip above before Henry had even cleared traffic in the middle of the field. Putting the ball on the money, Henry had the football in his lap as soon as he found clearer skies.

Despite the effectiveness Jones has been able to play with this season, there are still glaring concerns that have carried over from the college game. While Jones has shown the ability to throw with accuracy and anticipation, his success tends to take a steep hit when he starts working down the field and over the middle.

There are also times where you are just left wanting more from Jones. His efficiency, effectiveness, and safety with the football is the draw to his game. However, sometimes he just has to show more patience in the pocket and let his concepts develop. Jones is too eager to find his checkdown when he gets the looks he wants.

Instead, he finds his checkdown without feeling the sense of pressure rather than taking a dialed-up shot.

Jones has clearly done some nice things on tape, but his context cannot be overlooked in the matter. Looking at the other situations around the league, it’s easy to recognize that Jones is in the best spot for immediate success.

Trevor Lawrence is stuck in Jacksonville with Urban Meyer, who is seemingly asking him to carry the team instead of relying on James Robinson and the run game. Making matters worse, the Jaguars’ best wide receiver is out for the year.

Zach Wilson is in the hands of a first-year play-caller in Mike LeFleur. And while the two may find a groove together, they have not just yet. And Trey Lance has just one start this season for the San Francisco 49ers, so there is not much stock to take in his performance as a rookie.

Justin Fields is in the worst potential situation a rookie quarterback could find himself in with a lame-duck coach and an up-and-down offensive line. Yet in two of his last three starts, there have been some positives bleeding through.

Now, look at Jones. The Patriots have a top-10 rushing attack in the league with Damien Harris, Brandon Bolden and Rhamondre Stevenson. They have an extremely seasoned offensive line that’s projected to be the fifth-best unit in the league in Week 15 with everyone back and healthy. Cap that all off with a play-caller in McDaniels who has been doing his job for 15 years and a defense that ranks second in EVE, allowing 0.48 yards under the expected amount per play.

Ask yourself the question: Would Jones be playing as effectively and efficiently as he is now if he were in Jacksonville, New York or Chicago? Would Trevor Lawrence, Zach Wilson, Trey Lance or Justin Fields be looked at more favorably if they had the offensive support that Jones was drafted into?

The answers are obvious.

Kudos to Jones. He has taken the responsibility thrust upon him from Day 1, and he does the job that is asked from him. But the same question that was asked before the 2021 NFL Draft still applies today: How much further can Jones’ development rise?

The concern is still there. Pre-draft Jones was pegged as a “what you see is what you get” kind of guy. And given his performances down the field and over the middle of the field, there’s not much reason to dispute that assumption.

Jones’ physical tools are not going to improve. He remains a capped-out player whose style is going to require those around him to do their jobs effectively. There’s a reason the Patriots only trusted him to throw the football three times when the situation was not an ideal on Monday night.

Sure, if the Pats continue to churn out a top-10 run game and field a top defense, then Jones can thrive in the NFL. Heck, that’s how Jimmy Garoppolo played in a Super Bowl and how Garoppolo has managed to post almost identical numbers to Jones this year.

However, like Garoppolo, the wheels will begin to fall off when the situation around the quarterback collapses. He’s a rookie, and obviously, he’s doing some great things. But as we evaluate these rookie quarterbacks, and Jones in particular, it’s important to ask where can this player get better?

For Jones, unfortunately, those answers lie in areas of his game that just cannot evolve. Expect him to continue to succeed at what he is doing and expect him to make a lot of money throughout his career like Garoppolo, Kirk Cousins and Andy Dalton have.