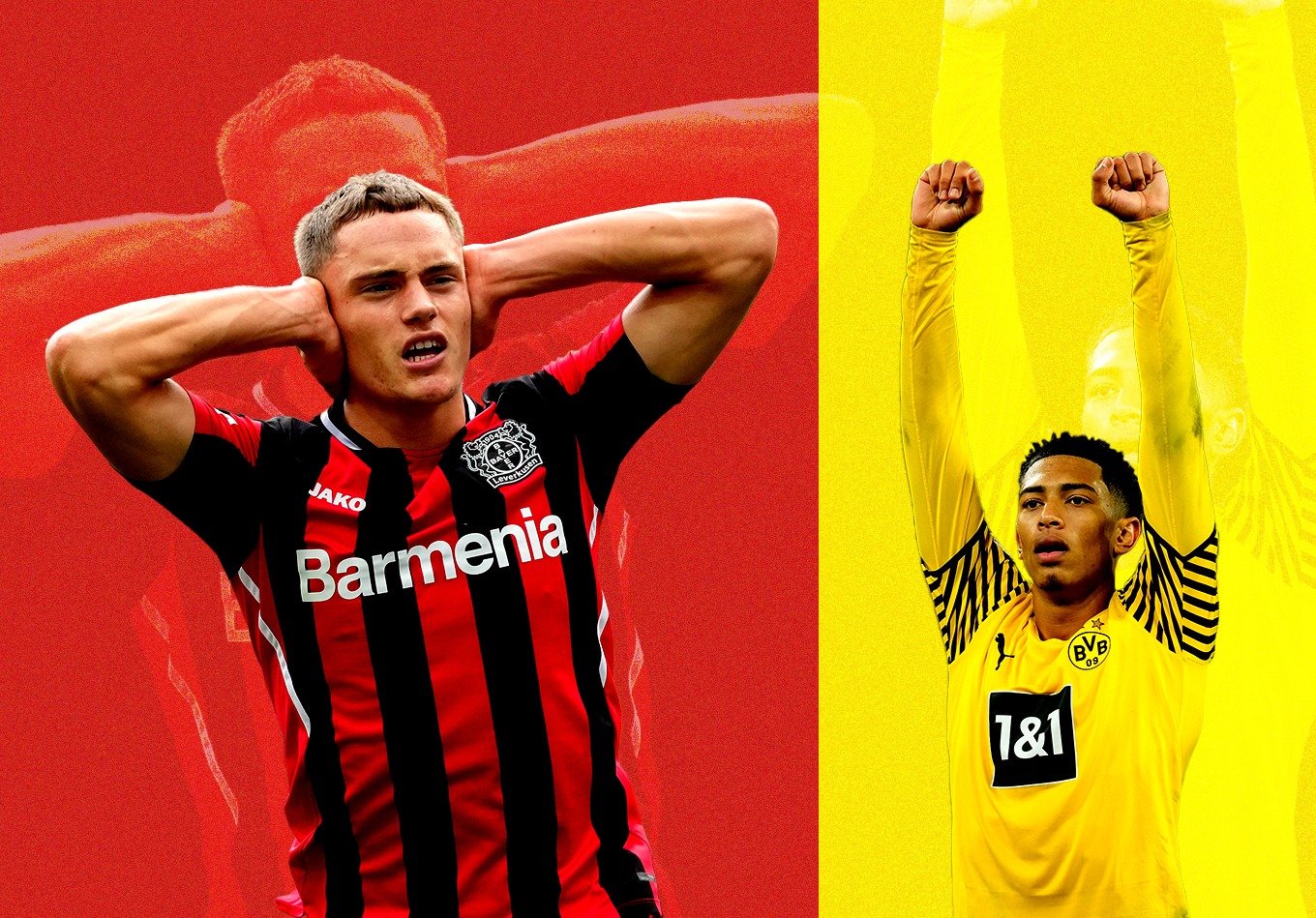 It’s no secret that teams in the German Bundesliga do not shy away from giving first team chances to younger players, but there are two sides that do this more than their league rivals. Of the 10 youngest players to ever appear in the competition, just two haven’t come from one of Borussia Dortmund of Bayer 04 Leverkusen. Therefore, it comes as little surprise that these two clubs have provided two of the best young talents in the Bundesliga this season: BVB’s Jude Bellingham and Bayer 04’s Florian Wirtz.

Let’s analyse the data behind the success the pair have had in their German top-flight careers to date.

Jude Bellingham arrived at Dortmund before the 2020-21 season shortly after turning 17, and despite such a young age the Englishman became a permanent fixture in their first team more or less immediately. In his first season, Bellingham featured in 46 matches across all competitions for BVB, with only veterans Mats Hummels (48) and Marco Reus (49) making more appearances for Dortmund.

Come 2021-22, Bellingham is one of the first names on the team sheet for Marco Rose’s side, starting 24 out of 26 matches in all competitions so far – a number matched among Dortmund’s outfield players only by club captain Marco Reus. To date, the English international is fully justifying his coach’s decision.

As displayed by his touch map below, Bellingham is an all-action midfielder, feeling comfortable on every part of the pitch. However, he has played a wider role this season in the Borussia Dortmund side than in 2020-21 – a deployment that has also seen him get into the opposition box more often. Among Bundesliga midfielders, only RB Leipzig attacking midfielder Christopher Nkunku (119) has had more touches in the opposition box than Bellingham’s 53.

Both Bellingham’s willingness to join the attack as well as his defensive prowess are perfectly illustrated by the following sequence from Dortmund’s UEFA Champions League home match versus Ajax, where he makes the run into the six-yard box, only to sprint back and make a perfect sliding tackle in the centre of the pitch to prevent a counter-attack after possession was lost.

Bellingham has won 190 duels across all competitions this season, which is nearly twice as many as his next most successful teammate (Marco Reus’ 104), while he also boasts the best figure among all Bundesliga players this season – 25 more than next-best Lucas Höler (165). As an integral part of Dortmund’s high press, the Englishman also leads his team as the player to win possession most often in the final third (23).

Compared to other midfielders from around the Bundesliga, Bellingham is one of the most prolific tacklers, boasting the fourth best tackle success rate among midfielders in the competition at 71% (minimum 15 tackles). In the league alone this has led to him starting four sequences that ended in a goal, a figure only bettered Bayern Munich’s Thomas Müller.

However, the English international is also a standout performer when it comes to attacking. In all competitions Bellingham has directly contributed to 12 goals (three goals, nine assists). Among Bundesliga midfielders, only fellow teenage sensation Florian Wirtz (19) and RB Leipzig’s Christopher Nkunku (22) have provided more. However, those two players are deployed within their sides in a more attacking role than the Englishman.

Bellingham’s vision, in particular, stands out. No midfielder from the big five leagues has assisted more goals from open play than the former Birmingham man’s nine. In fact, the only player among these who can match that number is Wirtz.

In the Bundesliga this season, only Marco Reus (91) has been involved in more open-play attacking sequences leading to shots for Borussia Dortmund than Bellingham has (68), with his involvements nearly equally split between having the shot (22), creating the chance (18) or being involved in the build up to the shot (28):

The Englishman is exceptionally adept with the ball at his feet. His 55 successful take-ons this season are nearly twice as many as those from the next most successful Dortmund player (Donyell Malen’s 30). Compared to other Bundesliga players from his position, Bellingham ranks joint-first for successful take-ons (30) and top for take-ons in the opposition half (39) among central midfielders.

When embarking on take-ons, Bellingham can follow through to the end product, too, and there’s no better case in point than his wonderful goal against Arminia Bielefeld in October.

Even when his opponents manage to stop Bellingham in the Bundesliga, it is often only unfairly, as the 18-year-old was the most fouled player in the first half of the 2021-22 campaign (42).

Bellingham has also made a lasting impression in the Champions League. Earlier this season, he became the youngest player in the competition’s history to score in two consecutive appearances (18y 78d) – a record previously held by none other than Kylian Mbappé (18y 85d).

While Erling Haaland is usually grabbing the headlines on Dortmund’s European nights, the former Birmingham man has been directly involved in four goals in the Champions League this season (one goal, three assists) for the joint-highest number among teenagers in this season’s competition alongside Salzburg’s Karim Adeyemi.

To make things even sweeter for all fans of the “Werkself,” Wirtz took that record away from Lukas Podolski who had set the previous mark while playing for Bayer 04’s local rivals 1. FC Köln. Wirtz of course himself played for Köln’s youth teams before making the move across the river Rhine to Bayer Leverkusen in the winter of 2020.

This season, Wirtz has become the focal point of Bayer Leverkusen’s attack which is, despite their form dropping off a bit of late, still the third most prolific in the Bundesliga at 40 goals, trailing only Dortmund (41) and Bayern Munich (56). On a personal level, the German international has been involved in 13 of these goals (five goals, eight assists), which is already two more goal involvements than he has had in his two seasons prior to 2021-22 combined (11 in 36 appearances). For Leverkusen, it’s their second-best offensive record after 17 matches in a Bundesliga campaign in club history, only surpassed in the 2001-02 season (43), when they famously ended up finishing runners-up in the league, the DFB-Pokal and the Champions League.

In the Bundesliga, Bayer 04 have scored 14.3 goals above expected, making them the Bundesliga’s biggest xG over-achievers, while Wirtz has also proven himself to be masterfully efficient. The 18-year-old has scored his five Bundesliga goals from shots totalling 3.7 expected goals, outperforming his xG tally by 1.3. But the German international is not only impressing domestically. He has scored three goals and assisted another three in the Europa League in 2021-22, leading all teenagers in terms of goal involvements in UEFA competitions this season (excluding qualifiers).

It is not just his goalscoring ability that makes Wirtz such a special player. He also has exceptional qualities as a playmaker. His nine open-play assists across all competitions are bettered by just three players from the big five leagues (Kylian Mbappé, Thomas Müller and Leroy Sané) and is, as previously mentioned, the joint-best figure among midfielders. Among all players from the Bundesliga, only Bayern’s Müller has created more chances from open play per 90 minutes in all competitions in 2021-22 than Wirtz (min. 450 minutes played), while only Joshua Kimmich has played more through balls (16) than the Leverkusen man (10).

The Leverkusen star has tallied 19 goal involvements (eight goals, 11 assists) across all competitions this season, despite playing a total of just 1,512 minutes. On average, the Wirtz is directly involved in a goal every 80 minutes – no other midfielder from Europe’s big five leagues has needed as few minutes per goal involvement in 2021-22 (min. 450 minutes played).

Across the 2021-22 Bundesliga campaign, Wirtz has been Leverkusen’s most productive attacking player in open play. He’s been involved in 68 of their open-play shots, with 23 of those coming via himself and another 26 coming as the player to make the final pass before the shot.

Lastly, if Wirtz is not already put under pressure immediately after receiving the ball, opponents in the Bundesliga have found him to be nearly unstoppable during this campaign. Wirtz has scored four goals from carries in the Bundesliga, assisting a further five strikes from such situations. His total of nine goal involvements following carries make him the most dangerous player following carries in Germany’s top flight in 2021-22.