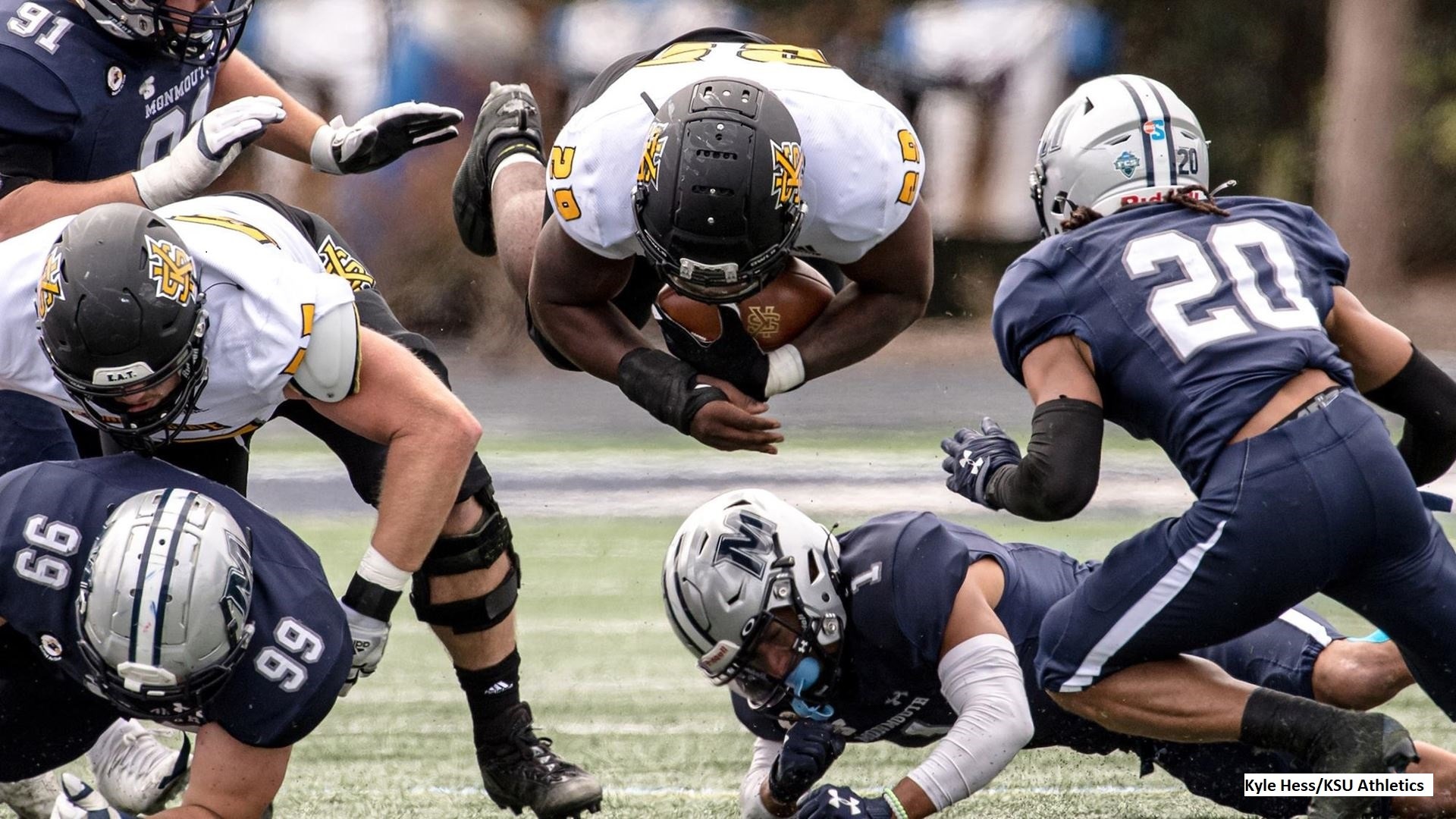 Where Conference Titles Races and Postseason Bids Stand in the FCS

Chaos is often synonymous with FCS college football due to week after week of surprising results from coast to coast.

However, heading into the final full week of the regular season (all but the SWAC), the conference title races and postseason picture feel more in order than in past years.

On Sunday, the NCAA will announce its 24-team playoff field, which includes automatic qualifiers from 11 conferences. The MEAC and SWAC champs will face off in the Celebration Bowl on Dec. 18 in Atlanta. Ivy League teams do not participate in a postseason.

Here’s a conference-by-conference breakdown heading into the week’s action:

Defending national champion Sam Houston (9-0) has clinched the conference title and playoff AQ. At-large hopeful Stephen F. Austin (7-3) should beat Lamar on Saturday to end the regular season with a five-game winning streak, and a one-point loss to Sam Houston is nearly as attractive. Eastern Kentucky (6-4) lost to SFA, so it’s way down on the list of bubble teams.

Count on the Big Sky earning five playoff bids for the first time. Montana State (9-1, 7-0) and Sacramento State (8-2, 7-0) are two games ahead in the standings, so one if not both will claim the title, although MSU is expected to earn the AQ should they finish in a tie. Montana, Eastern Washington and UC Davis are all 8-2, but it’s more 8+ because they each beat an FBS opponent.

Saturday’s winner between Monmouth (7-3, 6-0) and Kennesaw State (9-1, 6-0) will clinch the conference title and AQ. Kennesaw appears in great shape for an at-large bid even with a loss, but Monmouth’s path in is probably only with a win.

Playoff-bound James Madison (9-1) and Villanova (8-2) are tied for first place and two games up in the standings. ‘Nova won the head-to-head matchup over JMU, so it will earn the AQ if they share the title. Rhode Island (7-3 with an FBS win) heads into Saturday’s action with an at-large resume, but William & Mary (6-4) hopes the results allow it to jump over the Rams in the pecking order. The CAA has never had only two qualifiers in a playoff above 16 teams.

The season ends on Saturday. Dartmouth (8-1, 5-1) and Princeton (8-1, 5-1) are tied atop the standings and face Cornell and Penn (both 1-5 in league), respectively, so it’s likely they will share the title. The Harvard-Yale winner would earn a share of the title only if both co-leaders lose their games.

South Carolina State (5-5, 4-0) has clinched at least a share of its 18th MEAC championship and the conference’s bid to the Celebration Bowl. The Bulldogs will make it an outright title with a win over Norfolk State or a loss by second-place North Carolina Central (5-5, 3-1) to Delaware State.

The MVFC will probably get five playoff bids. North Dakota State (9-1, 6-1) has clinched a share of its 10th MVFC title in the last 11 seasons as well as the AQ, but Missouri State (7-3, 6-2), South Dakota (7-3, 5-2) and Southern Illinois (7-3, 5-2) are still alive for a share of the title. South Dakota State (7-3, 4-3) has only six Division I wins heading into a tough game against North Dakota, but victories over NDSU and Colorado State boost the Jackrabbits’ resume. Northern Iowa (5-5, 3-4) is a long shot even with a win over Western Illinois, but it can point toward road victories over SDSU and Sacramento State.

UT Martin (9-1) has clinched the conference title and AQ. No other team is in the playoff picture.

Holy Cross (8-2) has clinched the league title and AQ. No other team is in the playoff picture.

ETSU (9-1, 6-1) is the only team assured of a playoff bid and will host co-leader Mercer (7-2, 6-1) for the conference title and AQ. Mercer is in a unique spot because a loss on Saturday would leave it with only six D-I wins, but also with a head-to-head win over fellow playoff hopeful Chattanooga (6-4, 5-2) and guaranteed of finishing ahead of defending champ VMI (6-4, 4-3), another hopeful, in the standings.

UIW (8-2, 6-1) and Southeastern Louisiana (8-2, 6-1) are the only teams alive for the conference title and AQ, but both appear headed to the playoffs – Southeastern has an attractive five road wins and UIW owns an FBS victory over Texas State. If they tie for the title, UIW would receive the AQ due to a head-to-head win.

Jackson State (9-1, 7-0) will not only represent the East Division in the SWAC championship game on Dec. 4, but appears in line to host it. Prairie View A&M (7-2, 6-1) leads in the West and will earn the division title with a win over Mississippi Valley State on Nov. 27 or by Alcorn State (6-4, 5-2; the only other team in West title contention) losing to Jackson State on Saturday. While the SWAC champ advances to the Celebration Bowl, Florida A&M (8-2, 6-1) will be an at-large candidate for the conference’s first playoff bid since 1997 if it beats Bethune-Cookman on Saturday.