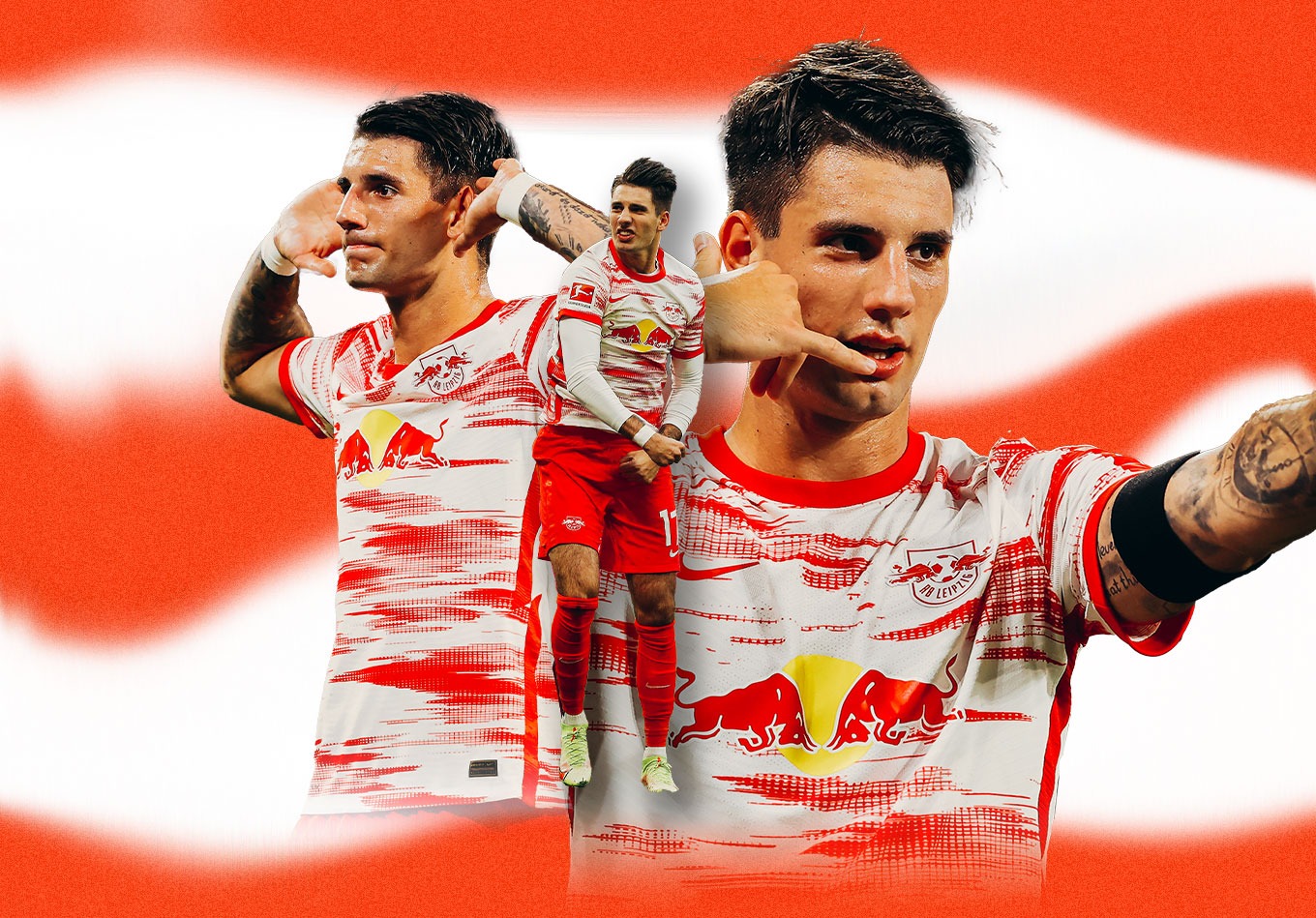 On the international stage, Dominik Szoboszlai’s name is just starting to resonate. Many fans may have seen his repertoire of goals including last season’s world-class strike against Lokomotiv Moscow in the Champions League and his last-minute winner vs. Iceland that took Hungary to the Euros.

But despite his hyped move to RB Leipzig, his fortunes have been mixed so far this season and last time out against PSG, he failed to get off the bench. In this week’s game, he’ll be hoping things are different, as will fans in Hungary.

Despite turning 21 just over a week ago, Szoboszlai has been a star in Hungary since he was 16.

It all started in March 2017, when captaining Hungary U17’s national team. Szobszlai whipped two perfect free-kicks into the top corner in the last five minutes of their European Championship qualifier vs. Russia to turn a 1-0 deficit into a 2-1 win.

The game itself wouldn’t have been all that widely watched live, but the quality of the goals turned heads when they appeared on news channels later that night. Three days later when Szoboszlai scored a last-minute screamer to take Hungary to the U17 Euros, the whole of Hungarian football stood up.

Hungary as a footballing nation has been starved of world-class footballers for decades, so when something special happens, the hysteria goes into overdrive.

Szoboszlai’s face was splashed on the front page of Hungary’s sports daily. His goals were plastered all over social media. He was the talk of every football show, every column.

But Hungarian football fans have experienced false dawns before. Krisztian Nemeth, the former Liverpool youngster, was supposed to be the next big thing. As was Balazs Dzsudzsak who’s career fell off a cliff when he turned down moves to Juventus and Atletico Madrid to join the doomed Anzhi Makhachkala project in Russia.

Szoboszlai though has felt different since the moment he came through. Guided by his former professional football-playing father, Zsolt, Dominik has had a wise sage advising and leading the way from an early age.

As soon as he could walk, Dominik was given a ball by his father, and right up until his move to Salzburg, his father was by his side at Zsolt’s very own academy, Fonix Gold, preparing him tactically, physically and mentally for the future.

Speaking after his son’s winner against Norway, Zsolt said, “He’s mentally prepared for situations like this. If he isn’t disciplined in his thinking, there are no last-minute goals.”

Zsolt was also adamant in his son learning German and English from a young age so he could adapt quickly for when he would inevitably move abroad, and was instrumental in advising Dominik to join Red Bull Salzburg ahead of interested outfits from Holland and Italy.

The Red Bull path is a perfect one for young players, as we’ve seen with Erling Haaland, Kevin Kampl, Peter Gulacsi, Naby Keita and Sadio Mane, to name just a few. Initially starting at Liefering in Austria’s second tier, youngsters can get used to playing at a senior level in a proper footballing system. Then when the players are good enough, they take the step up to Salzburg with the likelihood of European football to contend with. Then if successful, they move to a top European league or to Leipzig. It may not be what the purist wants to see, but for a young footballer trying to make his way in the game, there can be no better path to take.

This is evidenced by Szoboszlai’s perfectly cultivated rise. In his first full season in the Red Bull system (2017-18), playing on the right in a 4-3-1-2 midfield, Szoboszlai topped the scoring (10) and assist (seven) charts for Liefering as the youngest permanent member of the squad, ahead of the likes of Patson Daka and Enoch Mwepu.

At the end of the season, he made his debut for RB Salzburg at 17, and though he spent the first nine games of 2018-19 at Liefering (scoring six and assisting four), he soon became a fixture at the parent club, again on the right side of a 4-3-1-2 midfield. He ended the season with five goals and six assists in 20 games, including an assist against Napoli in a 3-1 Europa League win.

By the summer of 2019, rumours were already circling around the likelihood of his next destination. Szoboszlai had caught the eye not just at Salzburg, but in Hungary’s wins over Croatia and Wales in European Championship qualifying too. Arsenal were one of the clubs interested with his agent stating the Gunners had been in touch.

But Szoboszlai and his father, keen to keep their feet on the ground and be patient, were persuaded to stay by the Red Bull hierarchy and the man who would end up shaping his future for years to come: Jesse Marsch.

Similarly to what we’re seeing today, Marsch was not welcomed with open arms by the Salzburg faithful, despite being a self-proclaimed Red Bull “company man”. “Nein zu Marsch” was the banner that Salzburg fans displayed when news filtered through that the American looked set to be their new coach.

Many Salzburg fans resent being a feeder club to Leipzig and the Marsch appointment felt like a Leipzig castoff after his years in Germany as assistant coach.

He soon changed their minds, though. On the face of it, the Salzburg job feels like the easiest in the world. You’re handed some of the best youngsters in the world and you’re placed in a league where there’s very little competition for top spot. Yet there comes a certain pressure of getting the best out of these young players. After all, the future of the club depends on it. If the league is not won, you’re automatically a failure. Plus, there’s also European football to think about.

Before Marsch, Salzburg hadn’t been in the Champions League group stage since the Red Bull rebrand, but thanks to their coefficient improvement, in 2019-20 they automatically qualified and put up great performances both away to Napoli (1-1) and Liverpool (4-3 loss). Against Liverpool, a clip went viral of Marsch’s half-time motivational team talk, which was met with widespread praise but also a perception that Marsch is more of a mentality coach rather than a tactical one.

But that’s unfair. Under Marsch, Salzburg immediately changed systems from 4-3-1-2 to 4-2-2-2 with a double 6, often switching to 3-5-2 throughout his first season. He introduced a more ball-orientated pressing system to create more goalscoring opportunities. The press itself differs from other philosophies as it attacks the ball and zone rather than the player.

This in of itself is high-risk, high-reward and is something Marsch was wedded to throughout his time in Austria. In Marsch’s first season, Salzburg won the league with ease, scoring 31 more goals in the league and conceding seven more. The game at Anfield was a perfect encapsulation of his philosophy, where despite the opposition, Marsch set out his team as if they were facing an Austrian Bundesliga side.

That Salzburg team was a special one, with Haaland, Daka, Minamino, Mwepu just some of the names lining up under Marsch. But Marsch always said his strongest bond was with Szoboszlai.

During their stroll to the 2019-20 title, Szoboszlai was a crucial cog in Salzburg’s attacking play. As a creative force, he ranked in the top 10 for open play expected assists per 90.

And when he wasn’t delivering the final pass, he was still involved in the build-up to shots on goal. Only teammates Sekou Koita and Antoine Bernede were involved in more passing sequences leading to a shot per 90 than the Hungarian.

“I’ve developed a very good relationship with a lot of highly talented youngsters, but I feel I had the strongest bond with Dominik,” said Marsch in February 2021. “We’ve talked a lot, watched videos together, and discussed in private what the next step could be to improve.

“As talent goes, there aren’t many better players that can play his position – some are strong, some are technical, some are good tactically, and some can defend well or run a lot. However, Dominik is special because he has all of these skills combined.”

Szoboszlai thrived under Marsch. In his first season he scored 12 and assisted 18 in 40 games, mostly playing on the left of what Marsch called his two 10s in a 4-2-2-2. In his second year, he got nine goals and eight assists. But away from his goals, Szoboszlai also thrived in the pressing system and it’s no coincidence this year Szoboszlai has a higher press success % than any of his teammates so far this season.

However, this is also probably down to the philosophy itself that may be proving awkward for the Leipzig players to get accustomed to. Under Julian Nagelsmann, Leipzig became more tactically flexible than in recent years, yet under Marsch Leipzig hired a man with a more set philosophy and have looked tactically naïve at times in trying to implement it. This was never more obvious than against Manchester City in September where City’s first three goals came from relatively simply created overloads that Leipzig failed to react to.

There were reports in The Bild before the Man City game in September that the players felt Marsch was tactically limited compared to his predecessor. At Salzburg, Marsch was wedded to a style that incorporated two formations, but principally similar. However, at Leipzig he’s been unable to find something that’s worked and has tinkered largely unsuccessfully game to game.

In recent weeks, Marsch has changed from four at the back to the three at the back Leipzig became accustomed to playing under Nagelsmann. But things have looked far from fluid, despite having won every game in the Bundesliga when playing three at the back.

For Szoboszlai, he was expected to be Marsch’s jewel in the crown. In his first start in the Bundesliga, he scored a trademark long ranger and notched another from a cross-shot that found its way in from a long free kick. But he’s also become a victim of Marsch’s slow start. Despite averaging a goal contribution every 81 minutes this season (four goals, three assists), Szoboszlai has been in and out of the Leipzig side, playing right in a 4-2-3-1, left in a 4-2-3-1 and left in a 3-4-2-1.

It’s too early to say whether Marsch will be a failure or a success at Leipzig, and it’s too early to get concerned about Szoboszlai’s form. Many people expected him to take the Bundesliga by storm this season, especially considering his unquestionable talent and highly impressive numbers, but these early days are proving tough to find any real rhythm.

Leipzig lost Dayot Upamecano, Ibrahima Konate, Marcel Sabitzer, and one of the best coaches in the world in the summer. This new project was always going to take time to bear fruit and Red Bull are likely to back their “company man” for a while yet.

But considering the fact that there are already rumblings of discontent from the dressing room, Marsch will have to start turning things around soon and he needs to find a system where he can do it.

For Szoboszlai though, time is on his side. At 21, he already has a hugely impressive resume with 47 goals and 55 assists in senior football including three at international level and has a technical skillset that makes him one of the most stylish players in world football.

The Red Bull path too has been kind to him, as has Marsch. If Marsch is to turn this around, based on their history, Szoboszlai is surely one of the key men the American can rely on to do it.

Now it’s about Marsch finding a system where he and Szoboszlai can help bring those Salzburg glory days to Leipzig.