The Milan Derby Through Time: The Viz | The Analyst 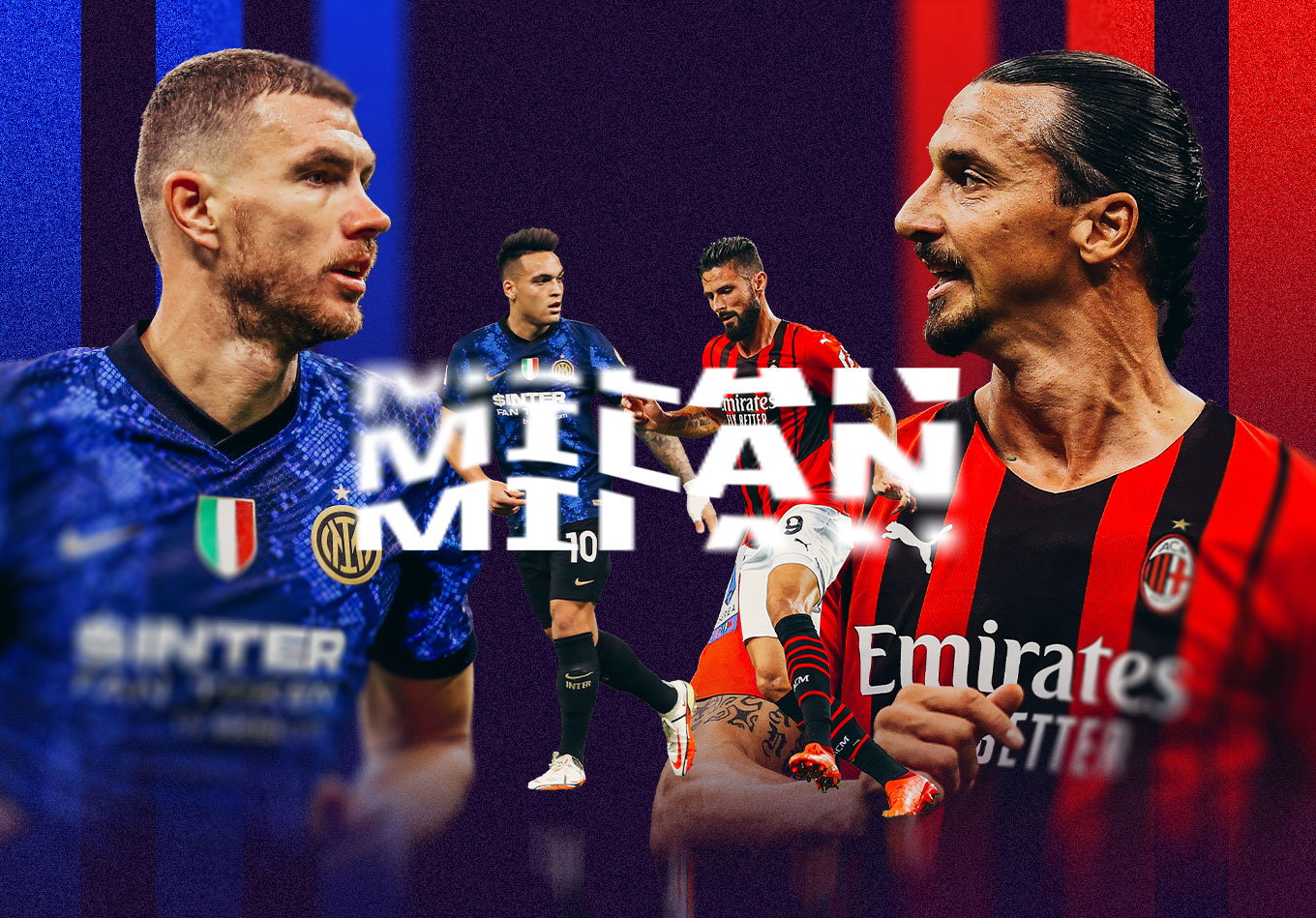 This weekend will see the 175th Milan derby in Serie A history, with much at stake. Internazionale are the reigning Champions, but AC Milan find themselves level on points at the top of the table and seven points above their rivals. Can the Rossoneri extend their lead or will Inter move closer to their city rivals?

Since Serie A began in 1929-30, these two rivals have met on 174 occasions in the Italian top-flight, with Internazionale holding an advantage with 67 wins over AC Milan’s 52. Inter didn’t lose any of their first 17 meetings with Milan in the competition, with AC finally picking up their first Serie A derby victory in February 1938 thanks to a 1-0 win.

The first official league meeting between these clubs can be traced back to January 1909, with AC Milan beating Inter 3-2 in the Prima Categoria, which back then was the equivalent of Serie A as Italy’s top-flight domestic league.

Coming into this meeting, Internazionale have won five of their last six Serie A meetings with their rivals including each of their last three “away” fixtures. However, Stefano Pioli’s side enter this derby as the form side – winning 10 of their first 11 Serie A fixtures in a season for the first time in their history, including their last seven in a row, with the aim of making it eight in succession for the first time since September 2006 under Carlo Ancelotti.

AC Milan find themselves seven points ahead of Internazionale in the Serie A table, and this is their biggest lead over their rivals coming into a league derby since November 2016. That game ended 2-2 with Inter being managed then by current Rossoneri coach Pioli.

Internazionale’s 2020-21 Serie A title was their 19th top-flight Italian league crown, with 17 of these coming in the era of Serie A since 1929-30. That’s one more title than Milan overall (18), who won 15 of their top-flight league triumphs since the inception of Serie A – their first in the competition was in 1950-51. Both clubs find themselves way behind Juventus’ total of 36 Italian top-flight league titles, however.

If the 1980s saw Internazionale dominate – they finished above AC Milan in every single league season between 1979-80 and 1986-87, with Milan even spending two seasons in the second-tier in 1980-81 and 1982-83. But Milan certainly enjoyed the 1990s, with seven successive higher placed finishes in Serie A than their rivals between 1989-90 and 1995-96, including four title victories. 1993-94 saw Milan finish 12 places above Inter (13th) in the Serie A table, a record gap for them in the Serie A era, but the biggest gaps between the two rivals in a Serie A season come from Inter being above Milan. In 1979-80 Inter’s title win was 14 positions above Milan’s lowly 15th place and again in 1982-83 when Milan could only finish 17th (their joint-lowest Serie A finish) and Internazionale ended third.

Milan have only finished above Inter in the Serie A table once across the last eight seasons, with their sixth-place accomplishment a place above Inter’s seventh in 2016-17. A derby win on Sunday could change all of that, though.

Unsurprisingly, the three clubs with the most top-flight Italian league titles lead the Serie A win ratio chart. Internazionale sealed their 1,500th Serie A win earlier this season with their 3-1 away win at Fiorentina, while AC Milan have won 1,430 games in the competition as it stands. Both these clubs are some way off Juve’s 1,636 wins and 55% win ratio, however.

The Battle Between Youth & Experience

Based on playing time so far this season, this derby could be a battle between youth and experience. AC Milan’s average starting XI age of 25 years and 255 days in 2021-22 is the fourth youngest this season, after five successive seasons of having the youngest average in the Italian top-flight. This is despite having the oldest player to make an appearance in Serie A this season: 40-year-old Zlatan Ibrahimović – more on him later.

Internazionale, conversely, have experience on their side, with their average starting XI age the third oldest in Serie A so far this season at 28 years and 325 days old, over three years older on average than their rivals.

Milan’s squad age has changed dramatically since last winning the Scudetto in 2010-11, when their average starting XI age of 29 years and 241 days old was the third oldest in the competition. Inter’s title-winning 2020-21 side saw them have an average starting XI age of 28 years, 85 days which was their oldest in a Serie A season since 2012-13 but produced the goods as they picked up the Serie A trophy for the first time in 11 years.

Milan’s shift to a younger squad has come via financial necessity rather than choice, it seems, but based on 2020-21 it’s a method that’s starting to bear fruit. Their second-place finish was their best in Serie A since 2011-12 and with the start they’ve made so far in this campaign, it’s continuing to produce results.

The only player adjudged to be beyond his ‘peak years’ of 24-29 and play over 50% of league minutes for Milan this season is Simon Kjaer, while every single player to have played a higher proportion of minutes than the Danish international is aged 26 or under.

The difference to the makeup of their rivals’ squad is night and day. Of Internazionale’s 10 most used players in Serie A this season, six are considered past their ‘peak years’ of 24-29.

Coming into this derby match, of players to have played in Serie A this season, Internazionale players have a collective total of 99 Milan derby appearances in league competition – 36 more than Milan (63), who have 22 of these appearances (35%) via just Ibrahimovic (11) and Romagnoli (11).

Does experience matter in this derby match? Recent results suggest so.

Zlatan Ibrahimović will come into Sunday’s derby with a lot of history in this fixture. The Swedish striker is now in his 40s, having made his first appearance in the Derby della Madonnina in 2006 as a 25-year-old…a scoring debut, of course.

The Swede has scored 10 goals in Milan derby matches overall, with only four players scoring more. Eight of these have come in Serie A, currently equal to Andriy Shevchenko and Benito Lorenzi, while only Stefano Nyers (11), Gunnar Nordhal (11) and Giuseppe Meazza (12) have more in the fixture since Serie A began in 1929-30. He’s scored six Serie A goals against Inter in an AC Milan shirt – only against Roma (seven) has he scored more often for the club in the competition.

Ibrahimovic is also one of only four players to have scored for both Milan rivals in this Serie A fixture. With six goals for Milan and two for Internazionale, he joins Ronaldo, Enrico Candiani and Meazza in the short list.

Hakan Çalhanoğlu moved across the city to Inter Milan this summer, following four seasons at Milan. However, he never scored for AC in this Serie A fixture so won’t be able to become the fifth member of this exclusive club on Sunday should he find the net.

Both Milan sides feature within the five most ‘slow’ yet ‘intricate’ teams in Serie A 2021-22.

Inter have the fourth highest passes per sequence, while both teams feature in the five slowest to move the ball up the pitch in open-play passing sequences. Neither hold possession or pass as frequently overall as league-leaders Napoli, but still progress up field at a similar rate.

Milan also allow their opponents the fewest passes before making a defensive action (PPDA), with a league-low 8.6 in 2021-22.

With all but one of these 93 high turnovers coming from outside the box, it’ll be interesting to see if Milan can press and capitalise on an Inter central midfield pairing that like to carry the ball – with Marcelo Brozovic (174) and Nicolò Barella (161) making more ball carries than any other Inter players in Serie A this season.

Both players rank in the top six in Serie A for open-play attacking sequence involvements, so Milan will need to stop these two from finding pockets of space in the attacking half. Pressing high up the pitch and driving them deeper could be one way of doing this.

Inter are the highest scoring side in Serie A this season with 28 goals, closely followed in second place by AC Milan (25). Roma (195) and Napoli (172) have attempted more non-penalty shots than Internazionale (170) but Inzaghi’s side have been the second-most clinical finishers behind Verona from these shots – converting 15.6% of them.

Much of this is down to the great chances that Inter create. Their average non-penalty shot has an xG value of 0.12 (put simply, you would expect the average side to convert 12% of these shots) – way above Napoli (0.102), Roma (0.093) and rivals Milan (0.098). Having players on goalscoring form has helped – they are converting above this expected rate – but if they keep creating good quality chances on a frequent basis then the goals should continue to flow.

Last season saw Inter and AC Milan occupy the top two places in Serie A for the first time since 2010-11 when Milan won their last league title and Internazionale finished as runners up. In 2020-21 we saw the reverse of this, with Inter winning their first Serie A in 11 years and Milan ending 12 points behind in second.

Juventus dominated Serie A for nine years, and their demise last season was a major factor in the two Milanese teams occupying the two top spots, but it’s not the only reason.

Since Milan’s appointment of Stefano Pioli in October 2019, they have once again become a force to be reckoned with. In 80 Serie A matches, Pioli has led Milan to 50 victories (63% win ratio) and an average of 2.09 points per game – the highest by a Milan manager in the Italian top-flight since Lajos Czeizler’s spell as boss between July 1949 and June 1952 (2.13).

The last manager to take charge of more than 50 Serie A games at a club and post a higher points per game average than Pioli’s 2.09 was Antonio Conte at Inter in his 76-game spell between May 2019 and June 2021 (2.28). He left Inter this summer, but his replacement Simone Inzaghi has impressed in 11 games so far, with just one defeat in 11 Serie A matches and an average PPG of 2.18.

Only time will tell if Inzaghi can replicate Conte’s feat and seal another Serie A title in 2021-22 but winning the derby this weekend would be a step in the right direction of making that a reality.