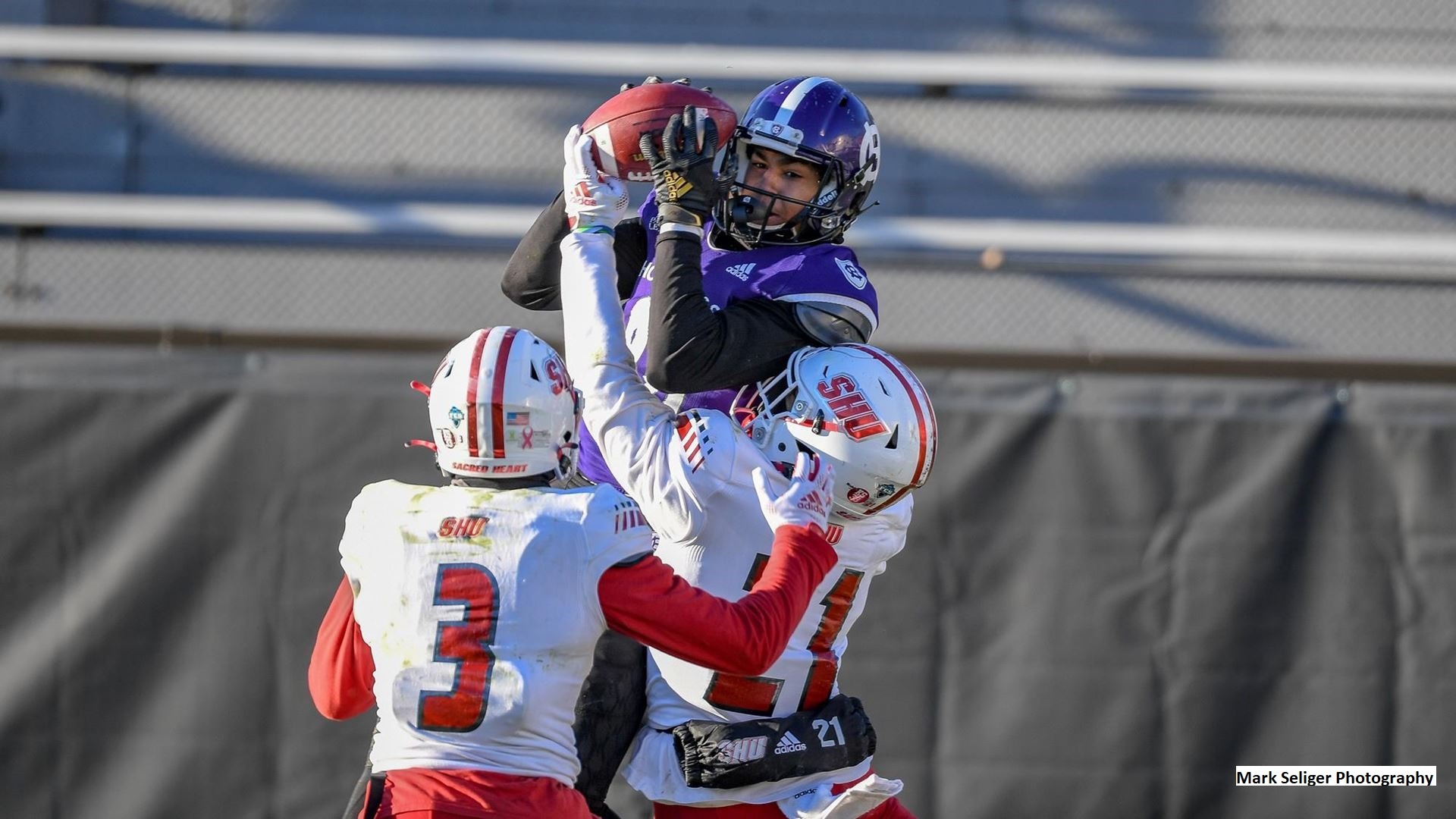 How The Game Was Won – Holy Cross never led until Matthew Sluka threw into double coverage for a 35-yard touchdown pass to Jalen Coker with 14 seconds remaining, erasing a 10-6 deficit. It was the Patriot League champion’s first win in five all-time playoff games.

Game Ball – Junior linebacker Jacob Dobbs tied his career high with 18 tackles, including 12 solos. He had 1.5 sacks plus one more tackle behind the line of scrimmage, totaling nine yards in losses.

Key Stats – In a defensive struggle, Sacred Heart’s 236 offensive yards and 78 passing yards were season lows. The Pioneers had their fewest completions (six) and pass attempts (12) in 31 games.

Up Next – Holy Cross will play at No. 5 seed Villanova (9-2) in the second round Friday night. They last met in the 2009 playoffs when ‘Nova won 38-28 to open its national championship-winning run.

How The Game Was Won – Kennesaw State scored 41 points in the first half to overwhelm Davidson for its 10th straight win – the second-longest active streak in the FCS. It allowed coach Brian Bohannon to tie the Big South all-time record with his 63rd career victory.

Game Ball – Owls quarterback Xavier Shepherd rushed for four touchdowns and threw for one, giving him at least four total scores in a fifth straight game. His 56-yard TD pass to Xavier Hill in the second quarter was a career long.

Up Next – Kennesaw State will play at No. 7 seed ETSU (10-1) in the second round next Saturday. They have split two all-time meetings, including a 56-16 Owls’ win in the program’s first-ever game and ETSU’s return to football on Sept. 3, 2015.

Game Ball – Davis, who only played three quarters, had three runs of at least 40 yards in just his second game back from being injured in the second game of the season. His 18-yard scoring run in the second quarter gave the Jackrabbits the lead for good 14-10.

Key Stat – The spring FCS runner-up out of the MVFC averaged 10.6 yards per carry while racking up a season-high 446 yards on the ground.

Up Next – South Dakota State will stay in the Big Sky, traveling to No. 4 seed Sacramento State (9-2) in the second round next Saturday.

How The Game Was Won – UIW secured its first all-time playoff victory by tying the game at 28-28 with 38 seconds left and going ahead in overtime on Robert Ferrel’s six-yard screen pass from Cameron Ward.

Game Ball – Ward completed 39 of 54 passes for 328 yards and four touchdowns, adding another score on the ground. The reigning Jerry Rice Award winner has at least two TD passes in all of his 18 career games.

Key Stat – The Southland Conference champion kept the chains moving in its win, going 8 of 18 on third-down conversion attempts and 2 of 2 on fourth downs, while producing a 29-20 advantage in first downs.

Up Next – UIW will travel to No. 1 seed Sam Houston (10-0), the defending national champion, in the second round next Saturday. Sam Houston has won eight of the nine previous meetings, including a 5-0 mark at home.

How The Game Was Won – Quarterback Eric Barriere accounted for 301 yards of total offense and two touchdowns, and Eastern Washington kept an opponent below 10 points for just the second time since the 2016 playoff quarterfinals.

Game Ball – Credit the Eagles defense that boasted linebacker Ty Graham with 13 tackles and cornerback Keshaun King with two interceptions. UNI was under 50 percent on 50 pass attempts with three picks, and was a combined 4 of 20 on third- and fourth-down conversions.

Key Stats – Barriere passed for 283 yards and a touchdown, making the Eagles 10-0 this season when he is above 250 yards.

Up Next – The Eagles will visit Big Sky rival and No. 6 seed Montana in the second round Friday night. They beat the Griz 34-28 on Oct. 2.

How The Game Was Won – In a game that had eight lead changes, UT Martin totaled six takeaways – three interceptions and three fumble recoveries – and fifth-year quarterback Dresser Winn was a steadying force while replacing an injured Keon Howard, the Ohio Valley Conference’s offensive player of the year.

Game Ball – With all due respect to Winn (272 passing yards, two touchdowns) and the opportunistic Skyhawks, coach Jason Simpson rallied his team from a decisive loss last week and the injury to Howard, earning his 100th career win and the program’s first in the playoffs in its second all-time appearance.

Key Stats – UT Martin produced 22 points off Missouri State’s six turnovers, including an interception by linebacker John Ford that Winn immediately turned into a 37-yard touchdown pass to Donnell Williams and the 32-31 lead with 3:36 left.

Up Next – The Skyhawks will stay on the road at No. 8 seed Montana State (9-2) in the second round next Saturday.

How The Game Was Won – In an all-MVFC matchup, Southern Illinois controlled game clock while posting a 4-0 edge in turnovers, including two Qua Brown interceptions. It marked the second time this calendar year the Salukis won a first-round game on the road.

Key Stats – SIU finished with nearly a 13-minute edge in time of possession, including 21:27 of first-half game clock, when they built a 13-0 halftime lead with scoring drives of 14, 15 and 16 plays.

Up Next – The Salukis will face another MVFC opponent at No. 2 seed North Dakota State (10-1) in the second round next Saturday. They did not play each other this season.

How The Game Was Won – Southeastern Louisiana quarterback Cole Kelley picked apart the SWAC’s first playoff qualifier since 1997, and the Lions built a 38-0 lead before losing the shutout in the final 5 1/2 minutes.

Game Ball – Kelley, the reigning Walter Payton Award winner, was 31 of 45 for 345 yards and four touchdowns, including two to Taron Jones. The 6-foot-7 signal caller has accounted for 58 touchdowns (42 passing, 16 rushing) this season.

Up Next – The Southland runner-up Lions will play at No. 3 seed James Madison (10-1) in the second round next Saturday.