Christopher Nkunku: The Player With “No Weaknesses” | The Analyst 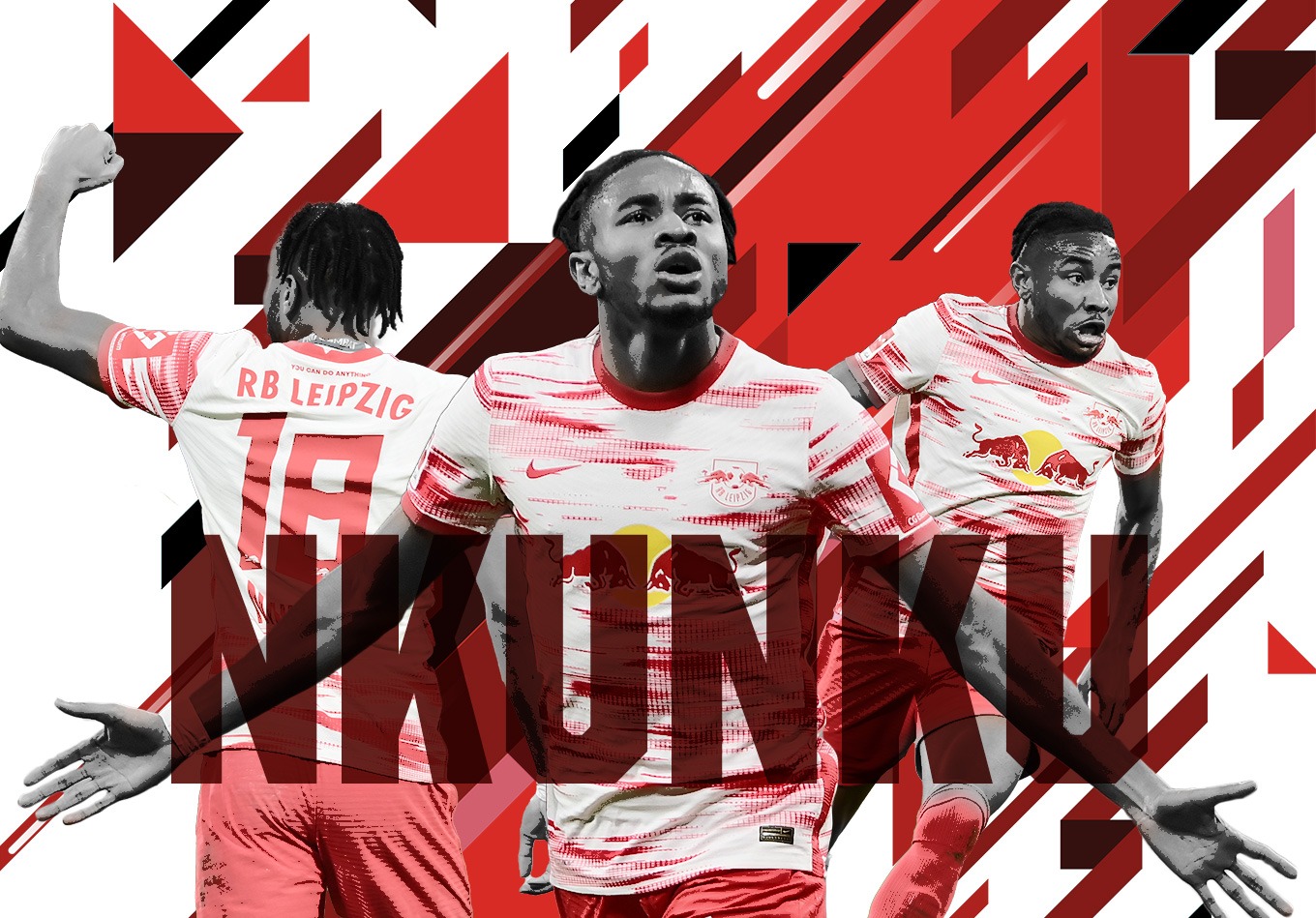 Christopher Nkunku is undoubtedly one of the most exciting Bundesliga players at the moment. But unlike many of his teammates from RB Leipzig, the 23-year-old is not currently playing for his country. France’s national coach Didier Deschamps has once again dispensed with him, even though the former PSG player is supposedly in the form of his life. Surely it’s only a matter of time.

It would have been one of the goals of the season. With RB Leipzig’s home game against Borussia Dortmund delicately poised at 1-1, Christopher Nkunku was the first to react to a loose ball in Dortmund’s penalty. He faked to shoot before pirouetting away from a sprawling Mats Hummels with a Zidane roulette, before hitting the same move seconds later to outdance another two defenders.  His shot on goal thudded into the post.

It was a piece of skill that perfectly encapsulated the form Nkunku has been in for weeks. Indeed, at the start of October, Leipzig’s new coach Jesse Marsch attested that his player has “no weaknesses”. Since then, the Frenchman’s stature has continued to rise.

In his first two seasons at Leipzig after his transfer from Paris Saint-Germain, Nkunku has been an ever-present performer for his side. With 44 appearances in all competitions in 2019-20 and 40 the following year, no outfield player has played more minutes for Leipzig since his arrival.

Nkunku has emerged as an excellent provider. Since his Bundesliga debut in 2019, only Thomas Müller (74), Filip Kostic (29) and Jadon Sancho (27) have assisted more goals in the German top-flight than his 22. This season, however, the Frenchman is attracting even more attention because he’s added a goalscoring threat to his game.

Adding Goals to His Game

Nkunku has scored more goals than any other Leipzig player this season with 11 in total. He also has four assists. His total of 15 goal involvements is six clear of his nearest teammate Dominik Szoboszlai. To put that into context, in Nkunku’s 17 games in all competitions this season, he’s almost already matched the goal tally he managed in his first 84 competitive appearances for RB (12). He’s particularly enjoyed putting on a show at home this season.  His seven competitive goals at Red Bull Arena this season are only surpassed by Robert Lewandowski (12) and Karim Benzema (9) of all players in Europe’s top five leagues.

Nkunku is a nightmare one-on-one match up for any defender, and his exceptional dribbling skills enable him to beat his opposite man and then look to pass or shoot. Together with Leroy Sané, Nkunku has fired in the most shots after a carry in the Bundesliga this season (12), while his six shots after take-ons are also a league best. He is the only player this season to have scored two goals after a take-on.

RB Leipzig’s change in style under Jesse Marsch has suited Nkunku. Compared to his predecessor Julian Nagelsmann, Marsch has for a return to the original “RB football” and has placed a renewed emphasis on vertical, direct play. No other team has taken as many shots this season following a high turnover (25), and when you compare that to last season, Leipzig are taking almost one shot more per game after winning the ball back high (2.3 to 1.4). At the same time, their number of 10+ pass sequences has decreased significantly from 13.0 per game to 8.6.

Under Marsch’s new system, Nkunku has found himself with more opportunities to get on the ball. And when he’s found himself in attacking situations he’s also benefited from a marked improvement in his own finishing. While he only converted 13% of his chances in his competitive games in 2020-21, he’s increased this rate to 31% this season.

Despite his newfound finishing skills, Nkunku has not lost his eye for a creative pass.  He’s created 18 chances from open play in the Bundesliga this season, which is the fourth-highest in the league. Looking at the underlying metrics support his creativity, too, with Nkunku’s expected assist (xA) value of 3.8 the best in the league. That’s even ahead of Müller, whose eight assists are the best tally so far.

Proving Himself in Europe

With five goals in the Champions League this season, Nkunku has also proven his value for Leipzig on the European stage. Only Robert Lewandowski (eight) and Sebastien Haller (seven) have scored more. In the process, Nkunku has exceeded his expected goals value of 2.7 by more than two goals (2.3). Only Cristiano Ronaldo has a greater difference between goals and xG in this season’s Champions League. This further supports the rich vein of form that Nkunku finds himself in.

Although his teammates might want to forget their 6-3 defeat at Manchester City, it’s a game Nkunku will remember for a while. He hit the first-ever hat-trick by a Leipzig player in the Champions League and kept his team in the game for a long time. After just four games, Nkunku has already set a new Leipzig club record with five goals. Never before has a player from the Saxons scored as many in a single Champions League season.

The only thing missing for Nkunku at the moment is a debut in the French national team. Despite his consistently strong performances, he was again absent from the French squad for their last two matches of the year. With players such as Kylian Mbappé, Kingsley Coman, Antoine Griezmann and Karim Benzema, France undoubtedly have outstanding attacking players at their disposal. But hardly anyone has been in as good form as Nkunku this season. His 11 competitive goals are bettered only by one French player from the big five leagues: Real Madrid’s Karim Benzema (14), who, unlike Nkunku, plays as a central striker.

At least Deschamps seems to have noticed the Leipzig player’s rise, and was full of praise for him ahead of France’s two recent games against Kazakhstan and Finland.

“He’s a player that we’re following. He could have been in there; he is doing interesting things (…). He’s not here, but he’s one of the serious candidates who can aspire to have this opportunity. I can only encourage him to continue.”

Nkunku still has a year until the start of the 2022 World Cup to convince the national coach of his qualities.