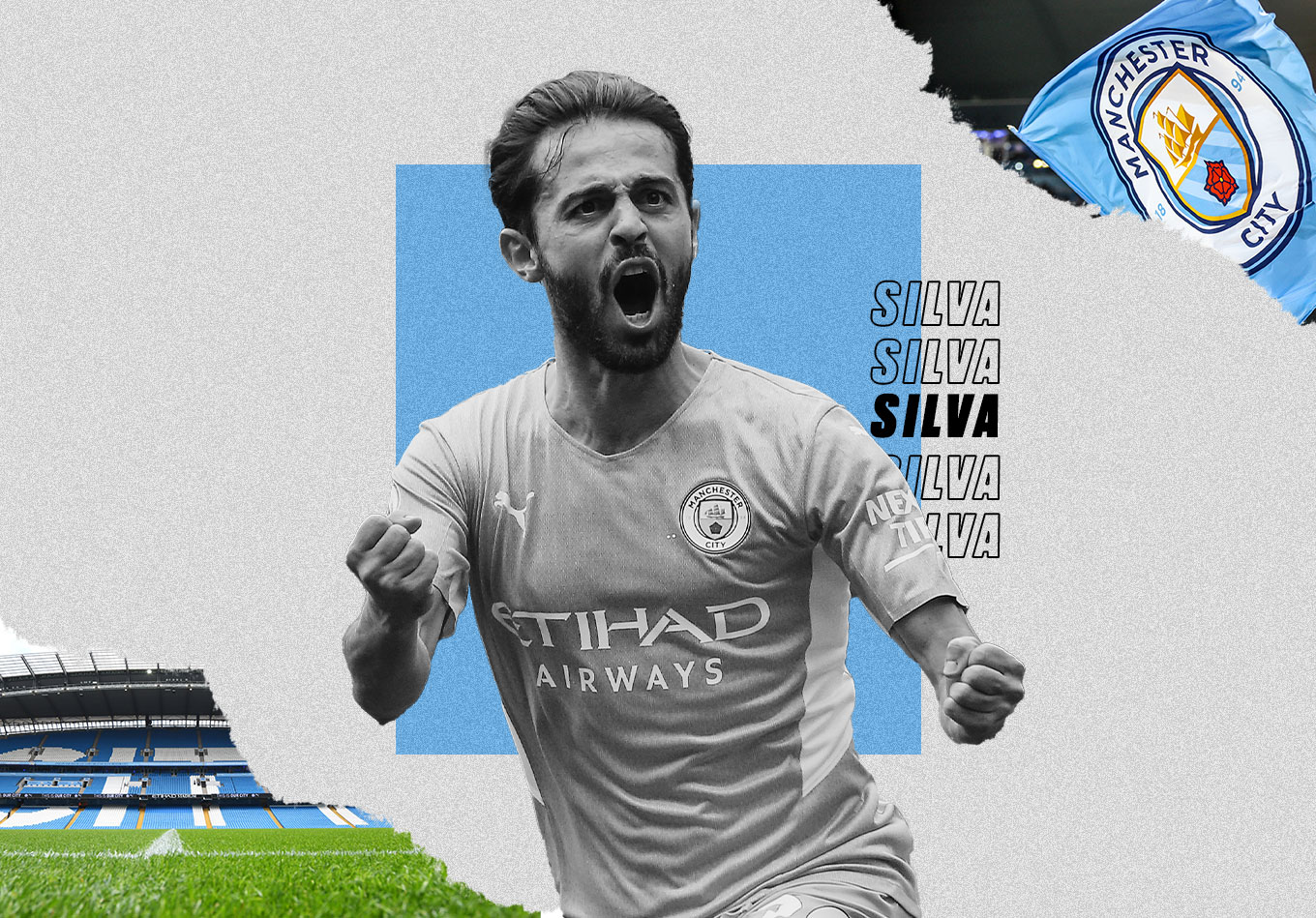 “It’s not just Bernardo… There are two, three or four players that want to leave… Players who want to leave know the door is open because we don’t want anyone here unsatisfied”.

This was Manchester City manager Pep Guardiola on the August 6, confirming that Bernardo Silva was looking to exit the Etihad. This statement came just seven days before the start of the 2021-22 Premier League season.

The 2018-19 campaign – only Bernardo’s second in English football – saw him start 31 league matches, a season in which he won the Premier League, FA Cup, and the League Cup. The icing on the cake? Winning Manchester City Player of the Year. His performances were nothing short of world-class, alternating between central midfield and right-wing, his all-action displays making him a firm fan favourite and one of the hottest players on the planet.

However, Bernardo’s last two league campaigns have seen him start just 23 and 24 Premier League games respectively from a possible 38 – a significant decrease in playing time in comparison to his blockbuster 2018-19 campaign. Despite this, he has still made the most competitive appearances for Manchester City since joining the club in 2017-18 which shows his importance to Guardiola.

Guardiola spoke to the press about Bernardo feeling exhausted and jaded, affected by a grueling footballing calendar with little to no rest. Not long after, rumours began to circulate that the Portuguese midfielder wanted out. The former Benfica man was reportedly in search of both increased playing time and responsibility, something that would help him get back to that form from 2018-19. The transfer rumours were further exacerbated following the arrival of £100m man Jack Grealish from Aston Villa.

On August 31, the Premier League transfer window closed, and Bernardo hadn’t got a move. He would remain a Man City player for the season ahead.

Fast forward to mid-November and it’s nigh-on impossible to imagine this Manchester City side without Bernardo Silva. Since the start of the season, he has started 11 of City’s 12 Premier League games and all five of their Champions League games so far. Perhaps most importantly, Bernardo is now playing in his best position, central midfield. Tenacious yet silky, aggressive yet rhythmic, Bernardo’s performances so far this season have encapsulated everything good about him as a player.

Matching his 2018-19 form? No. This version of Bernardo Silva has potential to be even better. So how did Bernardo get his mojo back?

Perhaps for the first time in his Man City career, the number 8 position is undoubtedly his. Often starting on the right-hand side of a midfield three, Bernardo can showcase his full repertoire, both defensively and in attack. Talents which he is, at times, unable to fully utilise when shunted out wide on the right-wing. This is something that can be seen when Bernardo is away with his national team Portugal, where manager Fernando Santos still often opts to use Bernardo as a winger and as a result, in those matches he is often much less productive than he is for City.

Guardiola waxed lyrical about the diminutive wizard following the 3-0 romp versus Everton last weekend, claiming Bernardo is much more than a midfielder.

“He can play six positions – holding midfielder, attacking midfielder, (left) winger, striker, false nine, the other winger – and can play everywhere. He is so smart, so intuitive, so intelligent.”

Across his time in the Premier League, he’s played in nearly every midfield role possible, as well as 7% of minutes as a false nine. 46% of his minutes have been played in a traditional central midfield role, but recent seasons saw him move to the right-wing – 33% of his minutes have been in that position across his English top-flight career so far.

In an interview with Manchester City’s official club magazine, Bernardo revealed: “I felt better last season than two, three years ago and I feel I’m much better now than I was last season.” His words are supported up by his form of late.

Bernardo has started the season with awards to back up his performances, scooping up the club’s Player of the Month award in consecutive months across September and October for putting in a string of exceptional performances from midfield, including yet another goal at Old Trafford, his third in three seasons against City’s bitter rivals. Since missing the opening-day defeat to Tottenham Hotspur, Bernardo has started every single Premier League match for City. Guardiola’s explanation for Bernardo’s increased game time? Simple, he can’t take him out of the side.

“Now, he is undroppable because of what he does on the pitch… Sometimes he didn’t play because he wasn’t undroppable; he was not at the level. The year we got 98 points and won the league, he was the best [player].”

One of the reasons why Bernardo was so valuable to the Manchester City team during the 2018-19 campaign was because of how hard he worked both with and without the ball. His performance against Liverpool that season epitomised him as a player.

As we can see from the numbers, this season he is back to his lung-busting best. No player in the Premier League has covered more distance per 90 minutes than Bernardo, who is averaging an impressive 11.90km per 90 minutes. As well as being the league leader, he is the only Manchester City player in the top ten for this statistic, further showing just how much of the workload Bernardo is happy to take on.

Another similarity that reminded supporters of the 2018-19 campaign was his performance against Liverpool this season, a side he seems to relish playing against. It was vintage Silva. He completed the match with the most dribbles (four), won more tackles than any other midfielder or forward (three) and made 55 passes, more than any of Liverpool’s front six. His display was a cocktail of tenacity mixed with flair and a reminder of just how good Bernardo can be.

When we look at his numbers in relation to the rest of his Manchester City teammates, it’s clear to see why Guardiola values the Portuguese magician so highly. In terms of pressures per 90, only Phil Foden averages more with 39.2, Bernardo has slightly fewer with 38.9 per 90. For pressures on a player without the ball, Bernardo again ranks in second place at the club with 5.5 per 90, behind Rodri who averages 6.3.

One of the main reasons why Bernardo is such a unique and valued member of the team is that his defensive and off-the-ball contribution alone would be sufficient to grant him a starting place in most teams in the world. And that’s without factoring in the other side of his game: his work with the ball going forward, which is equally as brilliant.

He is well on the way to having his best goalscoring season. In 2018-19, his best Premier League goalscoring season to date, Bernardo found the back of the net seven times in 36 matches. So far this season Bernardo already has four goals, despite playing 24 fewer games. At the time of writing, he is City’s top scorer in the Premier League this term and with attacking talent at the club in the form of Jack Grealish, Phil Foden, Gabriel Jesus and Raheem Sterling, that is no mean feat.

His contribution to City’s attacks continues to impress. Despite only having one assist so far, his underlying numbers tell a far more accurate picture. For example, at Manchester City, he ranks third for chances created from open play with 14.

When we look deeper, we can see that Bernardo is responsible for launching a lot of Manchester City’s attacks, which then result in either a goal assisted or a chance created by another player.

Secondary chances created – defined as a shot-ending sequence in open play where a player made the pass to the player who created the chance – are something that Bernardo is renowned for, especially since establishing himself as a central midfielder. No longer is he the wide man tasked with putting the final ball into the box, he is now orchestrating the attacks through the heart of midfield, motoring forward before releasing a pass to find either one of the full-backs (João Cancelo or Kyle Walker) or one of the wingers, who then provide the final ball.

Since his first Premier League season, only teammate Kevin de Bruyne (181) ranks higher than him (142) in the competition for secondary chances created. Unsurprisingly, due to his obvious rise in performance levels, Bernardo ranks first in the Premier League for secondary chances created in 2021-22 alone (16). He also ranks highly for starting open-play passing sequences that end in a shot, sitting in third place with 15, with fewer minutes played than the top two players (Stuart Dallas and Allan).

City’s midweek Champions League victory over Paris Saint-Germain saw them qualify for the Last 16 with a game to spare and confirmed as winners of their group ahead of the French side. During this game, Bernardo was at his best. He completed all 47 of his passes in the match – including a clever assist for Jesus’s winner – while UEFA statistics reveal that he ran a match-high 12.7km in the encounter.

Bernardo is truly a one-in-a-million footballer. He is a player with the drive, hunger, energy and tenacity of someone with half his talent. The fact someone as dynamic and intelligent as him with the ball works so hard without the ball, sets an example to young footballers all across the globe.

Bernardo’s mission this season will be elevate even further. His 2018-19 season will live for years in the memory of Manchester City supporters, but he will want his 2021-22 season to live even longer. If he continues in the same vein of form, there is every chance that this campaign will be looked at as his magnum opus.