The Yays and Nays: Our Week 7 Fantasy Football Projections, Top Plays and DFS Picks | The Analyst 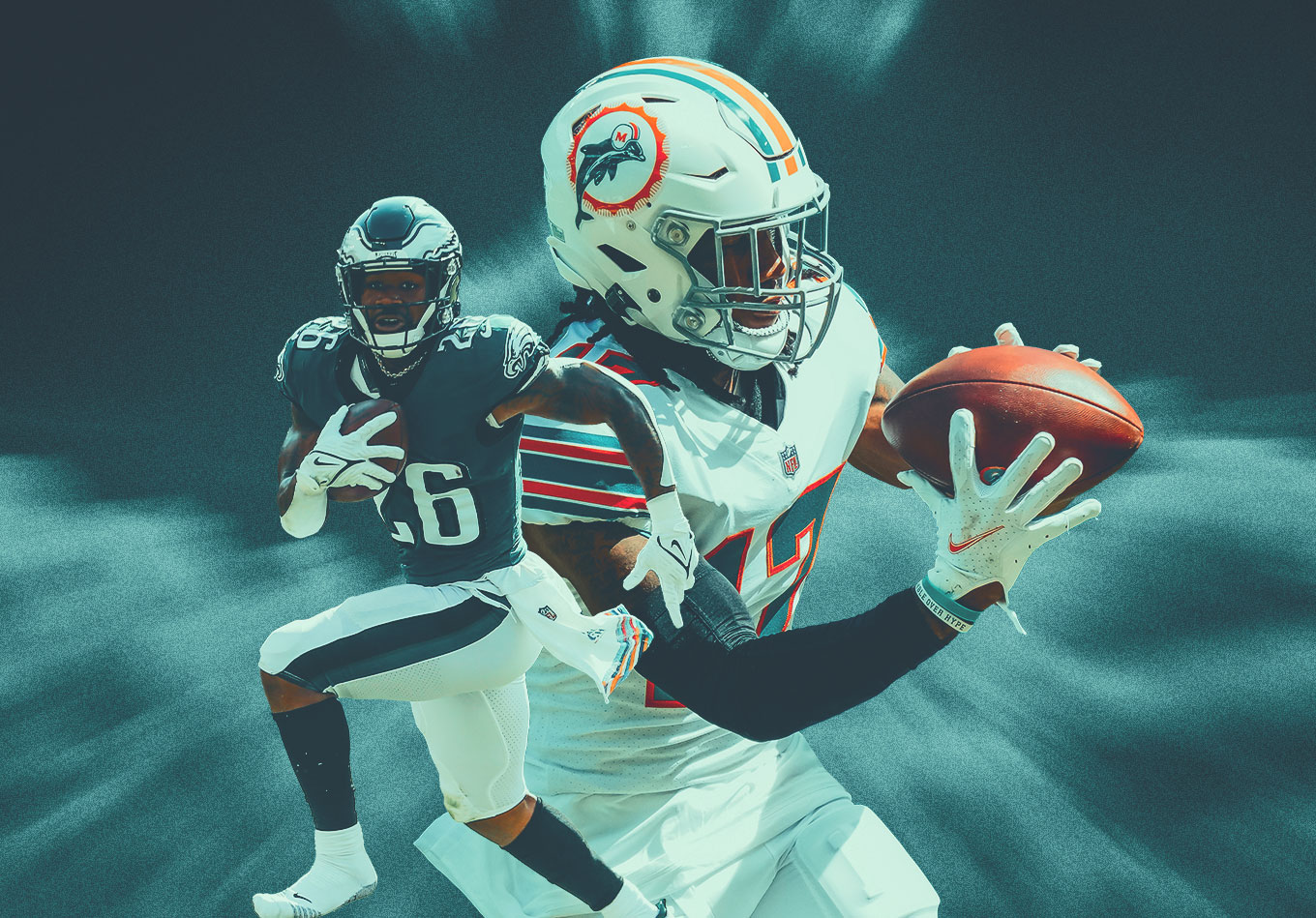 There are three players in football who have multiple games with 10 or more catches through the first six weeks of the season.

Two of them you can probably guess: Tyreek Hill and Davante Adams. It makes sense, therefore, that those two are tied for first (with Cooper Kupp) in receptions and are WR2 and WR3 respectively in PPR points.

The third you probably wouldn’t be able to guess, unless you are a diehard Miami Dolphins fan. On his way to 29 fantasy points and a weekly finish of WR4, Jaylen Waddle recorded 10 receptions in London against the Jacksonville Jaguars last week, becoming the third player with two such games.

What caught our eye though, was Waddle’s receiving yards in those two games. Last week, his 10 catches went for 70 yards. In Week 3, Waddle caught 12 balls, but only recorded a barely believable 58 yards. Those two games mark the lowest two outputs in receiving yards of the 18 instances in which a player recorded at least 10 receptions in game.

But even those numbers don’t quite capture how difficult yards have been to come by for Waddle to begin his NFL career. So here are a couple more. Of the 25 wide receivers with at least 30 receptions, Waddle’s 301 receiving yards ranks last. And of the 81 wide receivers with 12 receptions this season, Waddle ranks 81st in yards per catch (8.1).

This comes despite his elusiveness and big play ability being considered a strength coming out of Alabama. In fact, his 21.1 yards per reception in 2020 was the second highest among all FBS players with at least 25 receptions. During his collegiate career, Waddle’s career average of 18.9 yards per catch even topped his college teammate at Alabama, Henry Ruggs III (17.5), who currently leads the NFL with a 22.3 average.

When there are huge discrepancies like this, it should pique your interest as a fantasy manager when it comes to potential trade candidates. Ask yourself, what’s more likely to happen? Will Waddle remain historically poor at producing yards or will he start to have some dynamic plays like he showed at Alabama?

Well, if you believe it’s the ladder, Waddle is going to keep getting the ball, because he keeps getting open. In fact, we talked about his proclivity for getting open in college before the season started. That ability to get open has translated to the NFL. Waddle’s Open% is first (91.8) among all wide receivers with 25 targets.

This week, Waddle is solidly among our top 20 wide receivers and we’re projecting him to average exactly 10.0 yards per reception. Pay attention to that number for the next few weeks. If it continues to trickle up and gets into double digits, it may be Waddle who turns out to be the most productive rookie receiver at the end of the season.

As always, let’s jump around and evaluate some Week 7 projections gathered from some of the top data-driven projections available using several of our AI-powered models. We’ll get into some yays and nays before highlighting a few DFS value plays.

Mac Jones, QB (NE) vs. NYJ (ECR: 20, Our Rank: 13): Yes really. Mac Jones. Normally, we wouldn’t recommend a rookie quarterback, but you know what they say about desperate times. This week qualifies. With four of the top-10 fantasy quarterbacks on bye week, fantasy managers are looking for options on the waiver wire, and you could do worse than Jones.

Jones ranks sixth in well-thrown percentage (82.4), which measures how often quarterbacks make an accurate, on-target throw, and fourth in overall completion percentage (73.5) among quarterbacks with at least 100 passing attempts. But he is a rookie, and his six interceptions show that he still has a lot to learn.

Luckily, the New York Jets remain the only team in the NFL without an interception so far this season.

You’re not starting Jones to get 30 fantasy points. You’re starting him to be a solid QB2 contributor. And if that’s what you’re looking for, the formula for Jones to hit QB2 status is simple: 250 passing yards and two touchdowns with no interceptions equals an 18-point day. Even one interception wouldn’t immediately make him a poor play. Our models project Jones to finish with a number in the 16-18 point range.

Miles Sanders, RB (PHI) vs. LV (ECR: 20, Our Rank: 7): Maybe no player has elicited more disappointment from fantasy managers than Sanders to begin the season. With no touchdowns on the season and only one performance above 10.1 PPR points through six weeks, Sanders has found his way to the bench on fantasy teams. That changes this week.

Las Vegas allows the seventh most yards per carry (4.64) and the eighth most rushing yards per game (130.7). Meanwhile, Sanders is coming off maybe his most impressive game of the season. Against the stout Tampa Bay rushing defense last week, Sanders averaged 6.2 yards per carry and had three of his nine rushes go for more than 10 yards. Tampa has only allowed 10 such rushes all season.

As you can deduce in the previous sentence, the total number of carries was Sanders’ only problem. This is the week he gets 15 carries and against a susceptible Raiders defense, Sanders is a solid RB1. Play him with confidence.

Tyler Lockett, WR (SEA) vs. NO (ECR: 22, Our Rank: 15): Lockett was a week-winner for fantasy managers in Weeks 1 and 2. With 57.8 fantasy points after two weeks, Lockett was WR2 and looking to be headed towards an incredible season. Instead, all he’s done in the four weeks since is score a combined 29.7 PPR points – two points less than his Week 2 output of 31.8.

On top of his recent struggles, this week’s matchup with the New Orleans Saints is a tough one. But with Saints’ shutdown cornerback Marshon Lattimore expected to pay lots of attention to DK Metcalf, Lockett may be Geno Smith’s best shot at attacking the Saints defense. This is especially true because the Saints rank first in the NFL, allowing a minuscule 3.35 yards per carry.

In a game the Seahawks will surely feel like they must win, it’s on them to find their best playmakers. Lockett will be the one with the best matchups. He is a strong WR2 this week, with WR1 potential if he can find the end zone.

Amon-Ra St. Brown, WR (DET) vs. LAR (ECR: 40, Our Rank: 33): There is lots of depth at the wide receiver position each week. But with nine of the top-25 wide receivers on bye this week, fantasy managers will be scrounging the waiver wire for potential players to start. May we present, Amon-Ra St. Brown.

There are really two key factors here. First, Detroit is going to be losing, which means they’ll be throwing the ball a lot. The Rams are currently the heaviest projected favorite of the week and you know Sean McVay wants to stick it to Jared Goff and Matthew Stafford will surely enjoy playing against his old team.

Second, St. Brown has been targeted 23 times over the last three weeks. As long as that trend continues, he’ll have opportunities to produce against a Rams defense that is quietly allowing 70 more passing yards per game this season than last year when it led the NFL, allowing only 190.7 yards.

St. Brown should have enough of a baseline to put up respectable numbers, with two 13-point performances in his last three weeks. We don’t recommend starting him unless you are in an urgent situation. But if you are, St. Brown is a solid option.

Justin Fields, QB (CHI) vs. TB (ECR: 16, Our Rank: 25): There are 26 starting quarterbacks this week. And there aren’t many with a better matchup than getting to face a Tampa team that has already allowed three quarterbacks to post a 25-point fantasy outing.

Here’s the problem. Fields has yet to post two touchdowns in a single game and has as many interceptions as total touchdowns (3). His completion percentage of 55.2% is the lowest in football and his quarterback rating (67.4) is the second lowest.

And unlike quarterbacks such as Jalen Hurts, Fields surprisingly hasn’t been too successful running the ball, with only 66 rushing yards in his four starts. In a week where some of the best quarterback options are unavailable, find a quarterback that has scored even 15 fantasy points in a single week. There are better options than Fields.

Darrell Williams, RB (KC) vs. TEN (ECR: 10, Our Rank: 20): Wow, how frustrating is it to be a Clyde Edwards-Helaire fantasy manager? Williams took advantage of CEH’s absence last week and immediately posted a score higher than Edwards-Helaire has posted during his career.

He did that because he was the recipient of 24 touches (a number CEH has only received twice in his career), despite only averaging 3.0 yards per carry. And he posted 23.9 points because he scored two rushing touchdowns, something Edwards-Helaire has only done once in his career. This week, Williams and the Chiefs see a Titans defense that has already allowed Josh Allen last week (QB1 on the season) and Kyler Murray in Week 1 (QB4) to lead the position in scoring. Patrick Mahomes is ready to be the third.

After the week he had last week, fantasy managers are playing Williams again this week. But it’s unlikely he scores twice again and finishes in the top-10. He’s an RB2 this week.

DeVonta Smith, WR (PHI) vs. LV (ECR: 19, Our Rank: 28): This is a direct byproduct of the way Jalen Hurts scores his points. Hurts has the most projected carries and rushing yards among quarterbacks this week. As a result, his 234.6 projected passing yards are the fewest among quarterbacks our model projects will finish in the top 10 of the week.

In a week when we’ve already discussed in the Sanders section how Vegas is susceptible to the ground game, Smith isn’t likely to see a ton of prime scoring opportunities. He only has two targets in the red zone through six games and that lack of scoring potential hurts his projection. Smith has the fourth-lowest likelihood of scoring a touchdown among our top-30 projected wide receivers.

With three games already of three or fewer catches and three games of six or more catches, Smith has been decidedly hit or miss. He’s a risky WR2 this week.

Derrick Henry, RB (TEN) vs. KC (DK Price: 9,200): Usually, these spots are reserved for players whose prices are low. Sometimes, however, players are worth it, prices be damned. Henry gets the Kansas City Chiefs defense this week. The Chiefs have already allowed nine rushing touchdowns and this is a game where the Titans want their defense on the field as little as possible. Henry is going to get a lot of volume and he’s quite likely going to score a touchdown. He’s a top value this week.

Chris Godwin, WR (TB) vs. CHI (DK Price: 5,900): With Antonio Brown out with an ankle injury and Gronk out for one more week, Godwin has a chance for a monster week. In six games with nine or more targets with Brady as his quarterback, Godwin is averaging 19.78 PPR points. He’s a top-10 play for the week and our best WR value.

Dante Pettis, WR (NYG) vs. CAR (DK Price: 3,000): Constructing a winning DFS lineup usually includes finding one or two successful fliers and Pettis definitely qualifies. With Kenny Golladay and Kadarius Toney both out for the Giants this week, Daniel Jones will have to throw the ball to someone. Last week, that someone was Pettis – who was the recipient of 11 targets. If he can see that sort of volume again, he may end up as one of the steals of the week.