Harvest Festival for Haaland and Lewandowski | The Analyst 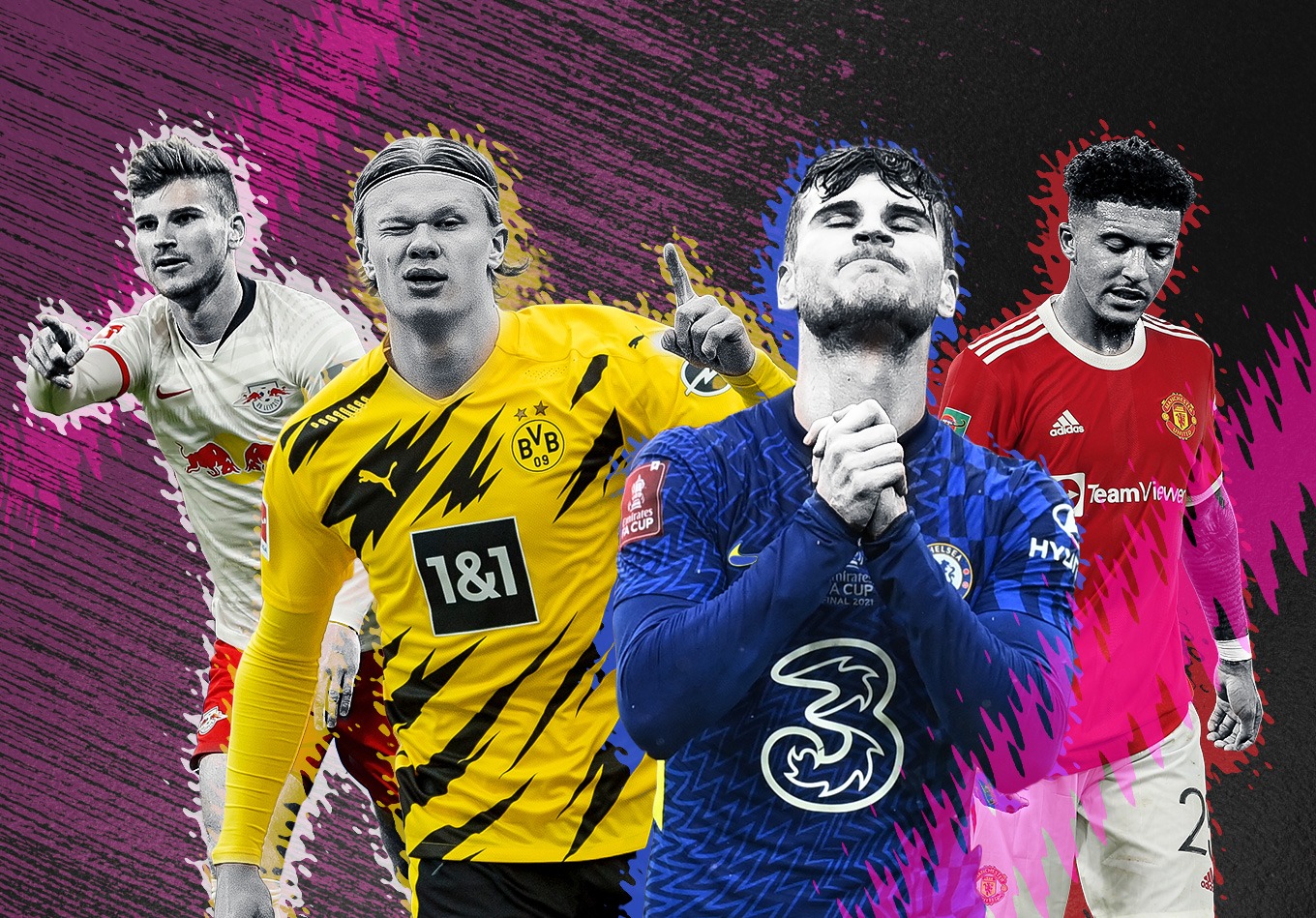 In their last Bundesliga home match before the international break, Bayern Munich beat Greuther Fürth 3-1 – but Robert Lewandowski lost. For the first time since February, the petrifyingly prolific Pole failed to score, letting slip an incredible streak of finding the net in 19 consecutive club games – during which he racked up 30 goals in total, including three braces and four hat-tricks.

Some 80% (24) of those goals came in the Bundesliga – where the 33-year-old Ballon d’Or contender has won the much cooler-sounding German equivalent of the Golden Boot, the ‘Torjägerkanone’ (‘top scorer cannon’), in each of the last four seasons.

Lewandowski’s all-time record 41-goal Bundesliga haul in 2020-21 – which, if we assume for ease of comparison with other leagues that he played all 34 games, he amassed at a rate of 1.2 goals per game – saw him become the first German-based player to scoop the European Golden Shoe since the great Gerd Müller 49 years earlier.

Clearly, the man is a machine – but he’s also the latest model to roll off the factory line in a Bundesliga rise of the machines that’s been in motion for 30 years. Looking at the German top flight in five-season blocks since 1991, we see that the average goal tally of each season’s top scorer (or scorers) has gone up every time: from 18.8 to 21.6 to 23.2 to 24.4 to 24.6 to (thanks in no small part to Lewandowski’s 156 goals between 2016-17 and 2020-21) 31.4. Each of Europe’s other top five leagues has seen its average decrease at least once in the same period.

Since 2016-17, when Pierre-Emerick Aubameyang took home the Torjägerkanone with 31 goals in his final season at Borussia Dortmund, the Bundesliga’s leading scorer has averaged 0.92 goals per game, the highest rate in the top five leagues. Not even the presence of Lionel Messi could push next-ranked La Liga’s figure above 0.85. As for the Premier League, it hasn’t earned its status as the best league in the world because of relentlessly free-scoring forwards; overall, the last five Golden Boot winners have averaged 0.67 goals per game, coming in a fair way short of Serie A (0.78), Ligue 1* (0.8) and the two aforementioned divisions. [*2019-20 season incomplete due to Covid-19]

Aside from Lewandowski and Aubameyang, Anthony Modeste, Timo Werner, Erling Haaland and André Silva have all broken the 25-goal barrier in the last five seasons – meaning it’s happened eight times in total. Account for the Bundesliga’s 34-fixture schedule (the other divisions are all 38 matchdays long) and the second-most prolific league, so to speak, is Serie A – where there have been five cases of a player scoring at 0.73 goals per game since 2016-17, two of which have been 2019-20 Golden Shoe winner Ciro Immobile).

On recent evidence, then, the Bundesliga is fertile ground for goal machines. But are Lewandowski and fellow terminator of defences Erling Haaland just combine harvesters in a farmers’ league?

Er, not exactly… For starters, they’ve both dominated the Champions League over the last couple of years.

As Bayern were crowned champions of Europe for the sixth time in 2019-20, Lewandowski top-scored with 15 goals. It was the second time he’d hit double figures in the competition, having struck ten times – including all four goals in a 4-1 semi-final first leg thrashing of Real Madrid – during Dortmund’s run to the 2013 final at Wembley, where they lost to Bayern. Cristiano Ronaldo is the only other player to have notched 15 or more goals in a single edition (inevitably, he’s done it on three occasions).

Haaland then kept the Bundesliga flag flying last season by leading the way with ten goals, despite Dortmund going out in the quarter-finals. Sure, it was the first time since 2014-15 that no one had managed more than ten, but the Norwegian, who broke out with Red Bull Salzburg in 2019, banging in a first-half hat-trick on his Champions League debut against Genk, became the youngest and quickest player to 20 goals in the competition, reaching the milestone at the age of 20 years and 231 days – surpassing Kylian Mbappe by over a year – and in just 14 appearances – smashing Harry Kane’s previous record by ten games.

But what makes Lewandowski and Haaland so superhumanly effective at domestic level? Well, certain aspects of the league play a part, but there’s simply no getting away from the fact that they are two absolutely elite operators in any context.

Since 18th January 2020, when Haaland made his Borussia Dortmund debut – scoring a hat-trick within 23 minutes of coming on a substitute because that’s just the kind of outrageous thing he does – he and Lewandowski have been responsible for 110 (6.8%) of all 1,603 Bundesliga goals scored – and 96 (6.4%) out of 1,479 non-penalty goals. Both have netted at a rate of slightly over a goal per 90 minutes, while they also rank second and first respectively for non-penalty expected goals per 90 in that time (0.76 and 0.92).

Over the same date range in the top five leagues, of players to remain in the same league and play 900 minutes or more, no one has posted a higher xG per 90 than Lewandowski. Only Kylian Mbappe (0.77 xG/90) has outdone Haaland (honourable mention for Glenn Murray, though, who finished his Premier League career with a flourish by falling 0.01 xG/90 short of matching post-Dortmund debut Haaland).

With seven goals in just five league appearances in 2021-22, Haaland is on course to set a new Bundesliga record off 44 – and it’s worth mentioning even with the season still in its infancy as his potential makes it an entirely possible feat. Lewandowski, meanwhile, may ‘only’ be going along at a goal a game so far, but we know he’s capable of flicking a switch and hitting the most purple of purple patches at any moment.

Bundesliga players were the most creative in the top five leagues from 2016-16 to 2020-21, averaging 0.08 expected assists per game. That average may only have been 0.01 lower in the Premier League, Serie A and Ligue 1, and 0.02 lower in La Liga – but even the most supremely individually capable strikers appreciate good service…

It would be remiss not to pass comment on the general quality of defending in the German top-flight, though.

Just once since 2016-17 has the Bundesliga not ranked bottom among the top five leagues in terms of expected goals against; that was last season, when the average Serie A team gave up 1.45 xGA per game compared to the average Bundesliga side’s 1.44 – so we’re talking the finest of fine margins anyway.

How much of that is due to the presence of some of Europe’s deadliest marksmen – and how much those strikers’ success is facilitated by the worst defending in the top five leagues – is hard to nail down precisely, but if you watch the Bundesliga and think that it’s ‘no defence, just vibes’, you kind of have a point. The relatively slow start to Premier League life that Timo Werner and Jadon Sancho have made might give some thinkers pause for thought, but if Haaland is on the move next summer it will have absolutely no impact on his attractiveness to England’s top sides.

After seven rounds of the current campaign, there have already been five instances of a team scoring five or more goals in a game – and Bayern are the only side in the top five leagues so far to manage seven, dishing that particular punishment out to Bochum (extraordinarily, Lewandowski only got one of the seven). The same has only happened eight times across the Premier League, La Liga, Serie A and Ligue 1 – where every team is between seven and nine fixtures into 2021-22.

Would the likes of Lewandowski and Haaland put up the same numbers in a significantly defensively stronger division such as the Premier League or La Liga? No – but they wouldn’t need to. It’s patently obvious that they’re two of the very best in the world (in Lewandowski’s case – and surely Haaland’s in years to come – one of the very best of all time); we should probably all just appreciate that the Bundesliga allows them to showcase themselves at their most brilliantly devastating.

After all, as Danny Blanchflower didn’t quite say, the game is about goals.