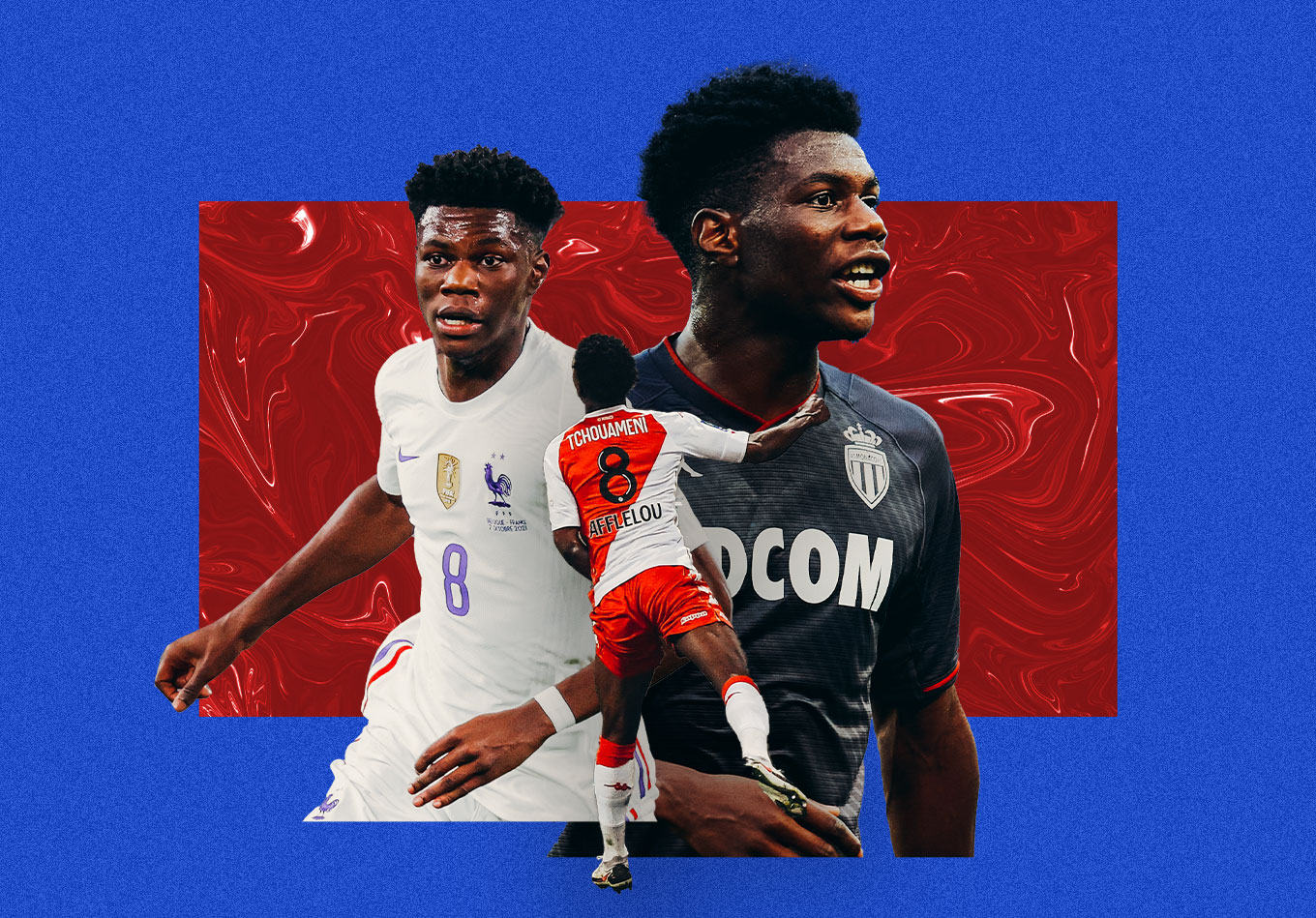 Paul Pogba, N’Golo Kanté and now Aurélien Tchouaméni? The Monaco midfielder became the French rising star in 2021, winning the Young Player of the Year award in Ligue 1 2020-21 before being called up by Didier Deschamps for the World Cup qualifiers and the UEFA Nations League Final. Could he match the stature of his illustrious predecessors with les Bleus?

Monaco and the Young Player of the Year award get along just fine. Aurélien Tchouaméni was the sixth player from the club to win the accolade, following in the footsteps of Thierry Henry (1997), David Trezeguet (1998), Philippe Christanval (2000), Patrice Evra (2004) and Kylian Mbappé (2017). Like them, Tchouaméni won his first international cap in the same year he got this prize, making his debut as a substitute in an otherwise unremarkable 1-1 draw with Bosnia-Herzegovina on September 1. Like four of his six predecessors, he quickly won a trophy with les Bleus – albeit not the most iconic one, with the UEFA Nations League title thanks to a 2-1 victory against Spain in October.

Tchouaméni’s rise to his current level is no surprise. Born in the objectively wonderful city of Rouen in January 2000 (confession: so was I, but that’s pure coincidence) Tchouaméni has followed a predictable trajectory. He joined Bordeaux academy at 11, signing his first contract in 2017 and making his professional debut in July 2018 in a UEFA Europa League Preliminary round game against Ventspils. On the international stage, he’s represented France at every youth level from under-16 through to under-21, before making the step up to the senior squad.

After just 25 Ligue 1 appearances with Les Girondins, he signed with Monaco for a fee reported to be €18m. The Covid-19 pandemic delayed his integration with the club, with Tchouaméni playing only 62 minutes before the premature end to the 2019-20 season. The appointment of Niko Kovac as head coach of the club in the weeks leading up to 2020-21 proved to be a key point for the young Frenchman, with Tchouaméni evidently proving his worth to the former Croatian international. Since Kovac’s arrival at Monaco, he’s been the most used player across all competitions with a club-high 57 appearances and 54 starts.

It took Kovac a few months to find his feet at Monaco, but they eventually contended for the Ligue 1 title until right near the end, with a third-place finish and only five points behind eventual winners Lille. One of their major assets in 2020-21 proved to be the midfield duo of Tchouaméni and Youssouf Fofana. Kovac was able to find a perfect balance in his side with the pair acting as a double pivot in a hybrid 3-4-3 formation, where they also provide impressive defensive work to allow the full backs to bring more support in the opposition half of the pitch.

Friends away from the pitch, the duo also provide a fantastic partnership on the field. Between the pair, “Fofameni” have won possession on 442 occasions in Ligue 1 in 2021, with 242 coming from Tchouaméni – the third most in the competition among the big five European leagues across the year. The new French international has also won the most tackles (61) while only six players across the five divisions have won more duels (262).

“It’s impossible to talk about Aurélien without mentioning Youssouf, explained Sofiane Diop, another promising talent at Monaco, in Onze Mondial. “Their duo is magical if I may say. For us, the attacking players, their presence has done us a lot of good. To have guys who work hard to get the ball and who give it to you on a plate, that’s the best.”

But the Frenchman has more to offer than just doing the defensive chores. As a defensive-minded midfielder, he is not directly involved in many goals (three goals, two assists in Ligue 1 in 2021), though he is able to contribute to Monaco’s attacking sequences. He has been involved in 89 open play attacking sequences this year, more than anyone else at Monaco. Impressively, only Joshua Kimmich (8) has made more secondary assists (penultimate pass before a goal) than Tchouaméni across the big five European leagues in 2021 so far (7).

The increased exposure following a callup to the French senior team can be hard to process at times, even more so for such a young talent as 21-year-old Tchouaméni – for instance, Eduardo Camavinga’s form suffered in the weeks following his Les Blues debut a year ago. Despite Monaco’s mixed start to 2021-22, this hasn’t been the case so far for their young midfielder, with Tchouaméni maintaining his high standards – no midfielder has made more interceptions in Ligue 1 than him (19), while no Monaco player has attempted more shots (17).

His strong performances across his first five French senior appearances makes him a natural candidate for a position in the 2022 World Cup for which France will surely now qualify. His partner in the midfield in the UEFA Nations League final, Paul Pogba is already convinced: “He is not a boy, he is a man. He has a lot of energy, technical quality, and an extraordinary athletic ability. We hope he will play many matches and that I will always be at his side!”

The Manchester United star’s compliments could turn into a prophecy. Tchouaméni’s signature is one that many big clubs across Europe look set to battle it out for, with United themselves linked to the Monaco midfielder the strongest of all. “Pogbameni” could become reality at club level in the summer, with a price tag of €60m rumoured and United needing a strong defensive midfielder. Should that happen, he’ll follow a glorious list of players sold by Monaco for a fortune, such as Anthony Martial, Thomas Lemar, James Rodriguez or Kylian Mbappé. The data suggests he’ll be worth every single penny.