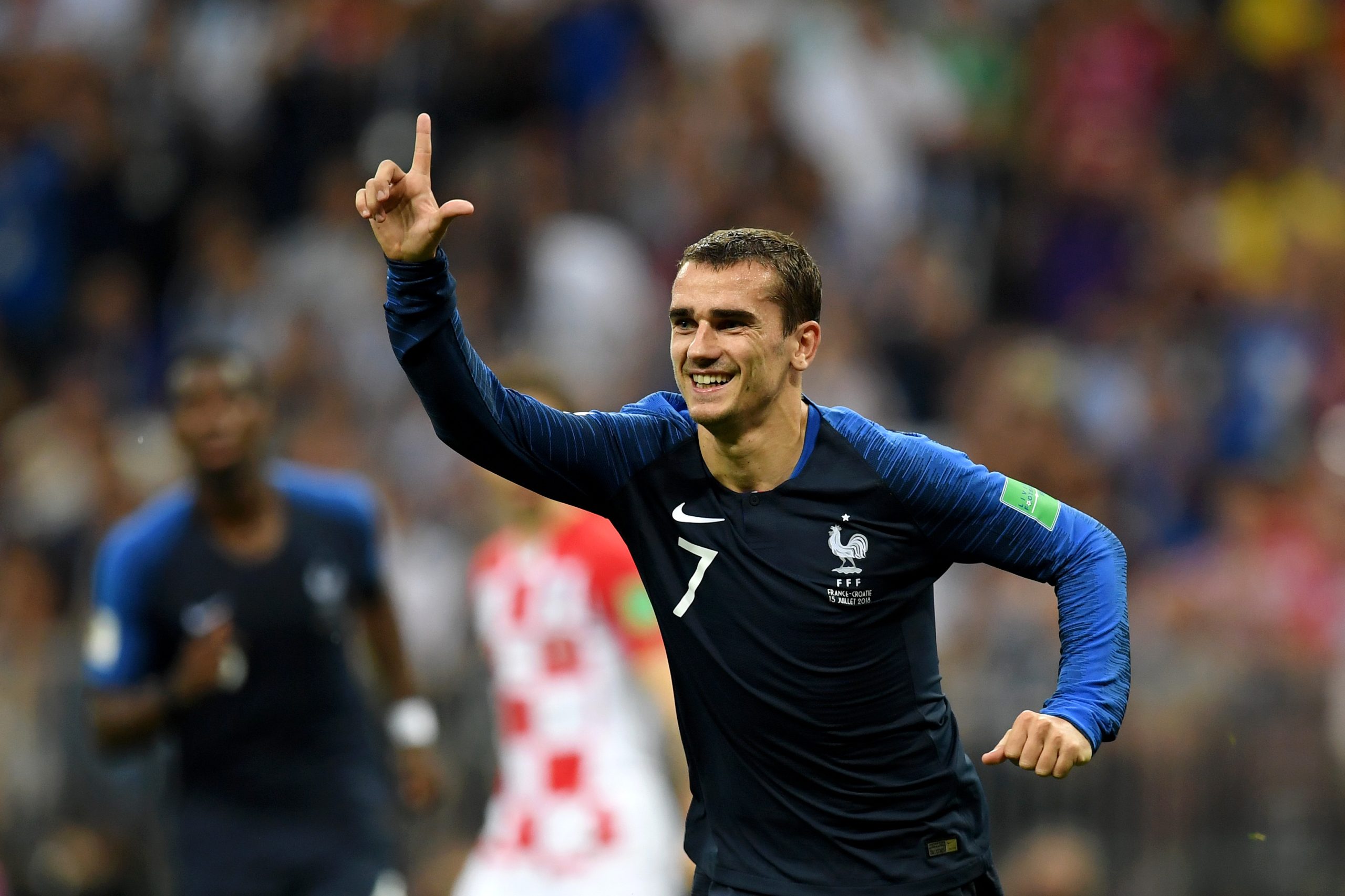 Griezmann the Great: France’s Next Centurion Is the Star of the Deschamps Era

Antoine Griezmann could win his 100th France cap in the Nations League final. There has been no more important player for Didier Deschamps.

After the 2018 World Cup final, when highlights of France’s thrilling 4-2 win were played back at Luzhniki Stadium, one man in particular was enraptured.

Antoine Griezmann stood on the pitch, ignoring the celebrations that surrounded him, his gaze fixed upwards at the big screen beneath the storm-laden sky.

His hands to his mouth, eyes watering, smile beaming, the face of the man bore an expression of boyish disbelief: I was just man of the match in the World Cup final. And we won.

It’s unlikely anything in Griezmann’s career will ever top that victory over Croatia in the Russian capital. Win or lose, Sunday’s Nations League final against Spain almost certainly won’t. Still, it will be another special occasion for the Atletico Madrid forward, who is set to win his 100th cap against the national team of his adoptive country.

It also offers a chance to reflect on Griezmann’s international career, which began only seven years ago. In the Didier Deschamps era, there has been no more important player.

Reaching a century of international games is commendable for any player – only eight men have ever achieved it for France before. What makes Griezmann unique is that all of his caps have come under the same coach.

It was Deschamps who handed Griezmann his debut on March 5, 2014, against the Netherlands, starting the forward wide on the left of a front three. Griezmann has since been used across the forward line in changing systems, but his presence in Deschamps’ set-up has been constant: he has only missed four France games since his first appearance and has played in 56 matches in a row for Les Bleus, the longest such streak in their history.

Under Deschamps, only Olivier Giroud (101) has played more often than Griezmann, while only goalkeeper and captain Hugo Lloris has started more games (96 compared with Griezmann’s 84) or played more minutes (8,700 to Griezmann’s 7,300).

When he scored his second in the 2-0 World Cup qualifying win over Finland in September, Griezmann moved level with Michel Platini on 41 international goals. Only Giroud (46) and Thierry Henry (51) have managed more in the national team’s history. Given his rate of just over five international goals per year, the outright record looks well within Griezmann’s reach, even if he insists it is not an “obsession” to get it.

Another record beckons in 2022: should France reach the semi-finals in Qatar, Griezmann could surpass Henry and Fabien Barthez (both on 17) for the most appearances for Les Bleus at World Cup finals.

Griezi Does It on the Biggest Stage

In the 2018 World Cup final, Griezmann won and took the free-kick from which Mario Mandzukic scored the opening own goal, and he converted the penalty that restored France’s lead when Croatia were beginning to take control.

It was a decisive display in the biggest match of the Deschamps era, but the fact Griezmann stepped up for his country when it mattered should not have come as a shock.

In the knockouts in Russia, Griezmann scored in the 4-3 win over Argentina, got a goal and an assist in the quarter-final with Uruguay and crossed for Samuel Umtiti’s headed winner against Belgium in the last four. He won the bronze ball as the third-best player at the tournament and the silver boot for finishing as second in the goal standings, two behind England’s Harry Kane on six.

Two years earlier, he scored twice against the Republic of Ireland, got a goal and two assists against Iceland and two more strikes against Germany in the knockouts of Euro 2016 before France fell at the final hurdle on home soil against Portugal. In both 2016 and 2018, he came third in the Ballon d’Or standings.

Griezmann won the golden boot and was named player of the tournament at Euro 2016. Indeed, in the history of the European Championship finals, only Cristiano Ronaldo (20) and Michel Platini (10) have been directly involved in more goals than the 30-year-old (nine).

Griezmann scored 22 goals in 74 La Liga games for Barcelona as he struggled to find his place in the system alongside Lionel Messi under three different coaches. It was a fairly poor return for €120million. Yet for France, regardless of tactics and personnel, he has delivered consistently when it matters.

Since his debut, Griezmann has nine goals and four assists in 16 World Cup qualifying games. No player has managed more or made more appearances. He also leads the way for chances created (33, 14 more than anyone else), and shots (46, seven more than nearest rival Paul Pogba).

In Euros qualifying, only Giroud matches Griezmann for games (10) and beats him for goals (six), while the Atleti man is again top for assists (seven). In fact, he has created 42 goalscoring chances in those games, which is 28 more than anyone else for France during his international career.

At World Cup finals, no France player has played more matches (12), scored more goals (four) or provided more assists (two) than Griezmann in the Deschamps era. His 17 chances created are, again, the most in that time.

And, at the European Championships… well, you can guess where we’re going here. His seven goals and two assists in 11 games is a better return than any other France player since his debut. If you add in four goals and an assist in 11 Nations League matches – again, nobody for France has played as many – then Griezmann stands on 43 direct goal involvements in competitive internationals, which is 15 more than any other player since he made his bow on the senior stage.

In Spain, Griezmann went from underrated Real Sociedad talent to Atletico Madrid superstar to Barcelona let-down. For France, he has been Monsieur Dependable for more than seven years.

If he marks his 100th cap with a decisive turn in a Nations League final victory, nobody – among the French, at least – would be surprised.