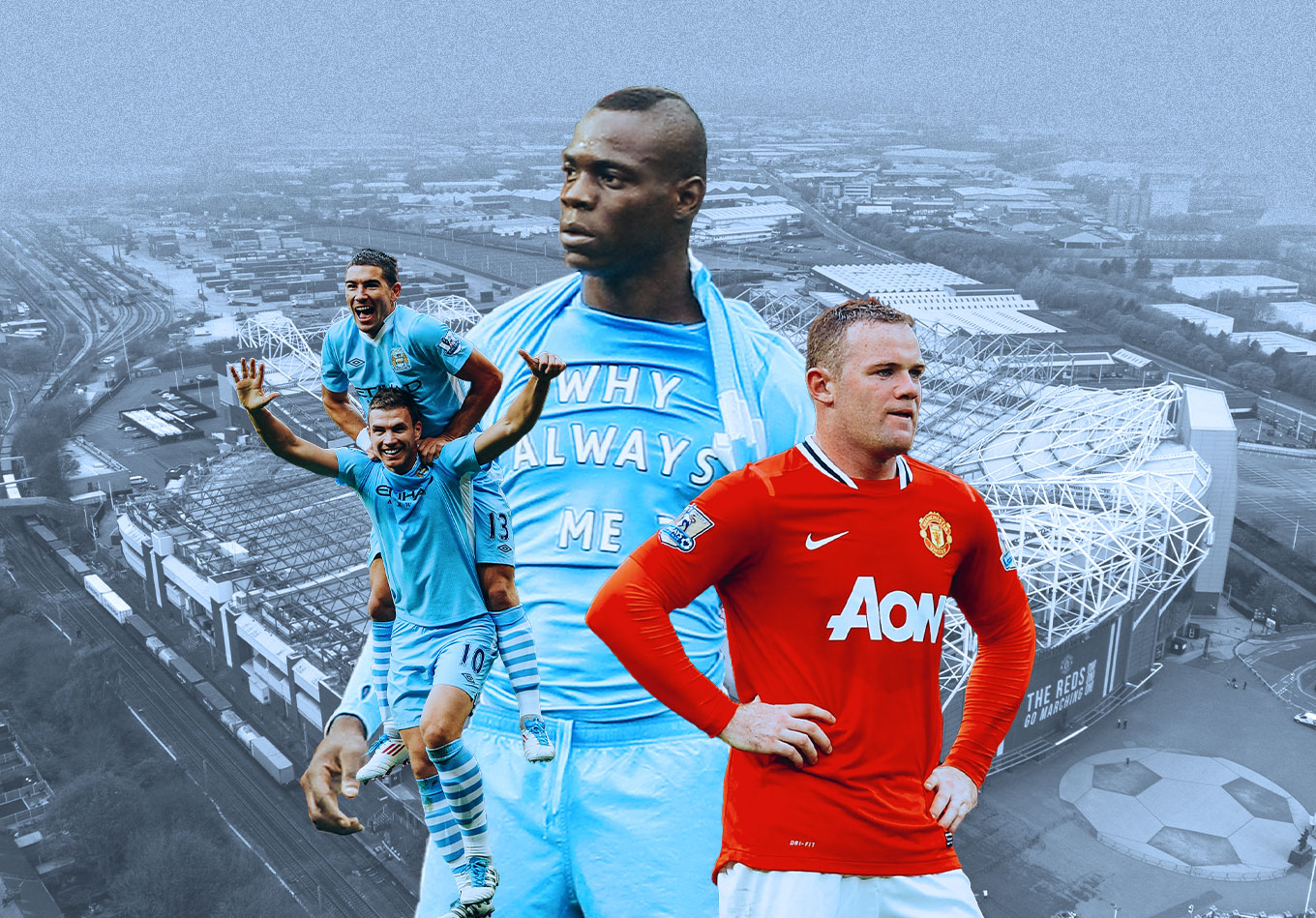 “It’s the worst result in my history. The impact will come from the embarrassment of the defeat.” Alex Ferguson, 2011.

This Saturday marks 10 years since Manchester City’s landmark 6-1 win at Old Trafford. Often and correctly viewed as the moment when the blue half of the city finally believed they could usurp the red half, this game was also the second part of a double header that marked a seismic structural change in the Premier League. That wild couple of months effectively ended both the Big Four era and the long 2000s, and brought in the rollercoaster 2010s. From Balotelli to Aguero to Leicester City and beyond.

First, let’s briefly journey back to the 2000s and remind ourselves who the Big Four were and why exactly they were the Big Four. At the start of the 21st century Manchester United were without a doubt the Premier League’s dominant club, with Arsenal their major rivals for domestic silverware. Between 1996 and 2004 that gilded pair won every Premier League title and six of the FA Cups. Liverpool, meanwhile, landed the occasional cup but were not even halfway into their long drought between league titles. Even so, Liverpool’s size and heritage meant they were equals in stature to United and Arsenal, as had been the case for a long time. Each of the three clubs would have good and bad decades but anyone with a passing knowledge of English football knew that these were the three perma-giants. It’s just the way it was. And the way it will be.

Then in 2003 Chelsea were catapulted to the top table, purchased by Roman Abramovich, who subsequently bought as many good players as he could get his hands on. Your Joe Coles, your Damian Duffs, your Hernan Crespos. It would take only two years and one appointment of Jose Mourinho in 2004 before Chelsea won the Premier League, a feat they then repeated a season later. The Grand Slam Sunday Big Four™ was born, and at least one of them would appear in every Champions League final between 2005 and 2009, with Manchester United doing so in 2011 too. Oh yeah: 2011, that year again.

If the 1990s were defined by leading Premier League clubs slowly learning to control games and score more intricate goals, then the 2000s were about four super clubs defending like soldiers and winning like generals. To put it simply, a Premier League follower in the 2000s knew who was going to win and how they would do it. But both of those variables were irreversibly shaken up in late 2011 because other clubs – Manchester City initially, followed by Leicester and Tottenham – were able to muscle in on the Big Four’s scene, and they did so by making football a lot less predictable.

Life since the 2010s has far less of the apparent certainty we knew beforehand and Premier League football is no different. If we look at the 10 occasions that one of the old Big Four let in six or more goals in a single game, there was one in the 1990s, Manchester United’s 6-3 defeat at Southampton in 1996 (narrator: they still won the title) and only one in the 2000s, Arsenal’s 6-1 defeat at Old Trafford in 2001 (narrator: United won the league that season and then Arsenal won the next one without losing a single game away from home all campaign). Life was peaceful and the rich villagers enjoyed their harvests.

What the first few weeks of the 2011-12 campaign ushered in was a fresh paradigm where big teams had seismic off afternoons and evenings that could collapse their seasons or, equally, be brushed off as a bad day at the office. I vividly recall not working on the August Sunday in 2011 that saw Arsenal travel to Old Trafford, a rare day off on Bank Holiday weekend. Once Manchester United against Arsenal was a Premier League fixture so enormous you wouldn’t dare do it, but by 2011 it was starting to not feel like that.

And these things echo longer than you can ever imagine at the time. Arsenal in October 2021 are an often-frustrating work in progress under Mikel Arteta, yet the only reason he has the connection with the club that got him the job in 2019 is because they went out and signed him, and others, in the brief gap between that 8-2 humiliation in Manchester and the closing of the transfer window. In 2011-12, Arteta scored against Blackburn in three separate Premier League games; eight seasons later he’d be the catalyst for the competition being suspended for three months.

At the time all we had to work with were basic metrics, none more rudimentary than one team scoring eight goals and the other team scoring two. But 10 years on we can view these things through a more advanced prism, and the expected goals shows a game where United scored eight goals from an xG of 3.32 and Arsenal two goals from 2.54. On another day it could have ended 2-2 and Arsène Wenger could have spent the first day of September not engaged in a post-Fàbregas footballing supermarket sweep.

Contemporary reaction to the 8-2 was bemusement that Arsenal, a team who hadn’t lost a single game in an entire season just seven years earlier, had let in eight goals in one game, but also a downbeat acceptance that Manchester United would dominate the English game forever. Alex Ferguson had been their manager for nearly a quarter of a century at this point and neither he nor United would ever slow down.

Manchester City manager Roberto Mancini holds his pre-match press conference and is concerned about the almost limitless experience and savoir-faire Manchester United have. “They are strong enough that even when they don’t play very well they win the game,” Mancini explains. “The difference is psychological. When you win every year your mind works very hard even if you’re not in good form or the team aren’t in good form.”

Manchester United manager Alex Ferguson has made it known that Mancini’s Manchester City worry him. A team on the rise. A club with a mission. The 2011 FA Cup was City’s first major honour since 1976. Ferguson, a man who can sense a power shift from a hundred miles, calls it “a turning point.”

People at the time understood this was a Manchester derby with a difference. This wasn’t plucky City in a PG film hoping they could nick a goal through Shaun Goater, this was a battle-hardened 18-rated City, top of the league and hungry for success.

As the teams walk out on to the pitch before kick-off, Mario Balotelli taps Nani on the back and gets a high five from the United player. Gary Neville blanking Peter Schmeichel at Maine Road this is not.

22 mins: United 0-1 City. James Milner, the eternal presence, already nearer to 30 than 20 in this game, passes to Balotelli on the edge of the box, who sidefoots it past David De Gea. The Italian, who had accidentally set fire to his house with fireworks less than 48 hours earlier, pulls up his shirt to reveal that t-shirt with the message “WHY ALWAYS ME”. A ballsy gesture at 1-0, just a quarter of the way through the game, it was another example of how late 2011 would set the agenda for modern football. T-shirts, slogans, merch. No actual need to talk to anyone if they can deduce your stance from some capital letters on some cotton.

47 mins: United 0-1 City. Jonny Evans is sent off for pulling down Balotelli on the edge of the area. This detail rarely gets remembered.

60 mins: United 0-2 City. David Silva and the immortal James Milner combine in the box, the Englishman crossing to Balotelli who slots home at the back post.

69 mins: United 0-3 City. Again, United’s left flank is exposed. This time Micah Richards crosses low to Sergio Aguero, who, like Balotelli, scores from inside the six-yard box. Very much the go-to manoeuvre of Pep Guardiola-era Manchester City, this game reminds you that low balls into the heart of the area has been a City move for quite some time.

81 mins: United 1-3 City. To be fair, the best goal of the game. Darren Fletcher, very much the millennial Scott McTominay, plays a one-two with Javier Hernandez and bends the ball past from the edge of the D.

89 mins: United 1-4 City. A 3-1 home defeat to City is painful but it wouldn’t have been a disaster. But a club reared on raw DNA and a manager who refuses to accept the coming dominance of Manchester City still, semi-justifiably, thinks his United team can pull off a comeback. With 10 men. Against a team who are almost perfectly designed to pick you off on the break. Still… might work…? Afraid not. City’s fourth, at least, comes from a deep corner, retrieved at the far post by Joleon Lescott who squares it on to Edin Dzeko’s deadly left knee. They all count.

90+3 mins: United 1-6 City. Like a mismatched game of FIFA, the game has become incredibly ragged. City’s final goal is a David Silva self-floated pinged aerial through ball to Dzeko who gleefully scores and runs to the City fans, who by this point might even outnumber the United fans in the stadium. Dzeko scoring in injury time would again be an issue for United this season. You know when, and why.

Unlike the 8-2 against Arsenal, the underlying numbers don’t paint this as a close game. City had an xG of 4.6 to United’s 0.5. This was a deserved thrashing but at 3-1 and down to 10 men, United should have shut up shop and taken it on the chin. “You won 3-1 against 10 men and your players wear self-made t-shirts under their kit, big deal.” But football clubs, from the gleaming Premier League down to the muddy base of the pyramid, aren’t built to take into account long-term trends. A league table is a cruel accumulation of individual battles; sometimes you can lose the battle and win the war. It just turns out that in this case Manchester United lost both.

Yes, Manchester United would lose the title on the final day in incredible circumstances on goal difference, adding weight to the popular “you should have settled for 3-1, Fergie” theory. But they shouldn’t have even been that vulnerable on that ridiculous final Sunday. The killer game came three weeks earlier when they drew 4-4 at home to Everton, which gave City a glimmer of hope, given the reverse derby was the next match for each side. And a home win at the Etihad pushed United back into second place for the first time since early March.

But it was the Everton game that started it all. United, 4-2 up with less than 10 minutes to go, let briefly iconic one-touch finisher Nikica Jelavić score to make it 4-3 on 83 minutes, then saw Steven Pienaar score two minutes later to secure that rare scoreline, a 4-4 (number 13 of 14 in the Premier League so far). Pienaar, like Balotelli, pulls up his jersey to reveal a homemade t-shirt, this one reading GOD IS GREAT, though at this point you’d forgive God for thinking WHY ALWAYS ME? You also wonder how much this result and the negative impact it had on United solidified David Moyes in Ferguson’s mind as his rightful successor a year on. In this, of all seasons, you can’t underplay the role of consequence.

Even people who don’t like football know about Manchester City winning 3-2 in injury time against QPR. It was the perfect end to the 2011-12 season, the first Premier League campaign of the post-order era. Autumn 2011 changed English football in ways we can only barely understand now, even though we laughed and lived and loved what came in its wake. The crazy four-way title race of 2013-14, the medieval splendour of Leicester in 2015-16, Guardiola and Klopp’s race for perfection at the end of the decade, top-flight football resuming in June 2020 with a goalline technology error in an empty stadium in Birmingham in the midst of a global pandemic. We’re a long way from the 2000s now; it’s not coming back.