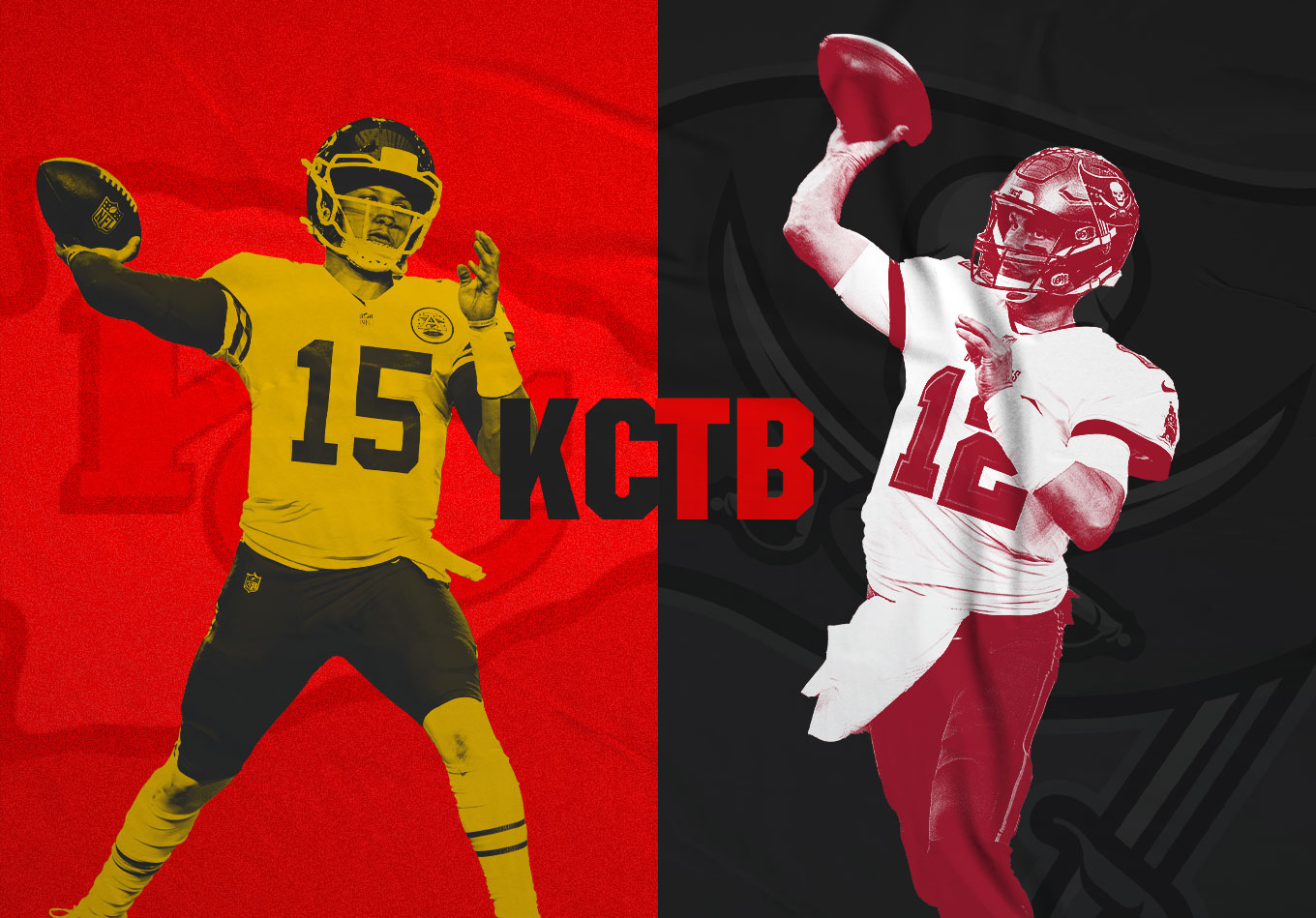 See You Again in LA: Why the Bucs and Chiefs Are Set up for a Super Bowl Rematch

The same two teams have not faced each other in consecutive Super Bowls since 1994 when the Dallas Cowboys ended the 1993 season by repeating as champions with a second straight rout of the Buffalo Bills, who also suffered their fourth consecutive defeat on the grandest stage.

And it is tough to look at the respective rosters following strong offseasons from both without feeling they should each be in a position to renew acquaintances at SoFi Stadium.

The Buccaneers did an excellent job of keeping their title-winning core together and opened the season with a dramatic 31-29 victory over the Cowboys on Thursday night, while the Chiefs attacked the glaring weakness that saw their hopes of defending the championship last season go up in flames.

Keeping the Band Together

Faced with the complex challenge of retaining a host of free agents who made significant contributions to their Super Bowl triumph while dealing with a salary cap shrinking due to the impact of the pandemic and a season played largely without fans, the Buccaneers made good on head coach Bruce Arians’ post-championship pledge to keep the heart of the roster intact.

There were, of course, some departures, but the pivotal cogs that helped propel the Bucs to a second title in franchise history were all tied down for 2021 and, in most cases, beyond.

Perhaps the most important move the Bucs made was to re-sign edge rusher Shaquil Barrett, who had 13 of Tampa Bay’s 31 pressures of Patrick Mahomes in February to a four-year, $72 million contract that is tied for the 11th-most expensive edge rusher contract in the league by average annual salary.

The fact that Barrett, who had a sack in the opener on Thursday night, agreed to take a discount to stay with Tampa is reflective of the excellent situation the Bucs are in and several of his teammates were similarly eager to re-sign with a team superbly positioned to contend for more titles.

Veteran linebacker Lavonte David received long-overdue recognition in 2020 after years of stellar play and also received a two-year, $25 million deal from the Bucs to keep him next to Devin White in the middle of the defense.

David allowed a burn, which is when a receiver wins his matchup with a defender on a play where he is targeted regardless of whether the ball is catchable, on 36.8% of his targets. The 6.42 burn yards per target he allowed was fourth best among all linebackers, while White’s pressure rate of 37.3 was the best for linebackers with at least 50 pass rush attempts.

They have a claim for being the top linebacking duo in football when it comes to affecting the pass game and the Bucs’ front seven looks to have all the ingredients to give quarterbacks nightmares again in 2021.

Tampa retained the services of defensive lineman Ndamukong Suh and added a first-round pass rusher in Joe Tryon, who recorded a 19.6 pressure rate off the edge for Washington in 2019. He beat a pass protector in 30 of his 35 total pressures.

However, the Chiefs have made a series of impressive moves with the aim of ensuring Tampa Bay cannot disrupt its aerial attack to the same extent should they meet again.

The defining image of Kansas City’s 31-9 loss in Super Bowl LV was that of Mahomes running for his life in the face of near relentless pressure from Tampa Bay.

Mahomes was playing behind an offensive line decimated by injuries. Right tackle Mike Remmers was forced to play at left tackle and guard Andrew Wylie had to take his place across the formation.

Kansas City’s offense was unable to function at anything close to peak performance as a result and the Chiefs’ offseason appeared designed entirely to prevent such a scenario from coming to pass again.

Joe Thuney was signed as a free agent to lock down the left guard position after serving as one of the most dependable players in football during his career with the New England Patriots. Thuney’s pressure allowed rate (4.0) in 2020 was fifth among all guards and he will have Orlando Brown Jr. on his outside shoulder after the Chiefs traded their 2021 first-rounder among multiple picks to acquire him from the Baltimore Ravens to be their new left tackle.

Brown, who is switching from right to left tackle and gave up a pressure rate of 9.0 in 2020, may have some work to do as a pass blocker but Kansas City should expect him to help its run game. Only David Bakhtiari (3.0) allowed run disruptions at a lower rate than Brown (3.6) last year.

In addition to fortifying the left side, the Chiefs ensured they will have depth across the line. They used one of their two second-round picks on Oklahoma center Creed Humphrey, whose pressure rate (1.6%) was tied for third best among Power 5 centers with a minimum of 50 pass protection snaps. He’s set to start ahead of versatile free-agent addition Austin Blythe and another rookie, sixth-round pick Trey Smith, is in line to get the starting right guard job ahead of Laurent Duvernay-Tardif.

Duvernay-Tardif, who opted out of the 2020 season to aid the fight against coronavirus in his native Canada, should prove an extremely valuable reserve after being credited with allowing just two adjusted sacks on 354 pass protection snaps in 2019.

The big question mark is at right tackle, where Lucas Niang seems primed to start. He did not play in his rookie year after opting out and is, therefore, likely to be the player opposing pass rushes target. The Chiefs will hope he can reprise the form of his senior year at TCU when he was not credited with an adjusted sack allowed on 123 pass protection snaps.

Kansas City defeated the Buccaneers in Week 12 of the 2020 season with the 27-24 score flattering Tampa Bay. Conventional wisdom says that with better protection, Mahomes and the Chiefs’ explosive offense would have the advantage. But, after an offseason in which the Bucs solidified the strength of their team and Chiefs attacked a deficiency, is that actually the case?

There is statistical evidence to back up the argument that, if the Chiefs have genuinely fixed their pass protection, then they deserve to be Super Bowl favorites.

When he is not overwhelmed by pressure, Mahomes can be an extremely dangerous quarterback to blitz due to his ability to improvise and turn seemingly negative plays into explosive ones.

From a clean pocket, he can be a little short of a nightmare to defend. In the Chiefs’ title-winning 2019 season, when he was not pressured, Mahomes delivered an accurate, well-thrown ball 84.0% of the time, the fifth-best rate in the NFL. His pickable pass percentage of 1.81 was third.

Those numbers dipped in 2020, but his 81.6 well-thrown percentage was still above average and his 2.39 pickable pass rate was 12th. With his 2019 following a stunning 2018 in which he was named league MVP, the likelihood is that last season was the anomaly.

Even if Mahomes does return to the remarkably high standards of his first two years as a starter, there’s plenty to suggest the Chiefs still might not be able to outgun a Buccaneers offense that coalesced at the perfect time in the previous campaign.

In the final four games following the regular-season loss to the Chiefs and their bye, the Bucs ran the table going 4-0 and led the league with 357.3 net passing yards per game. Brady, who had two interceptions but also 379 yards and four touchdowns in Thursday’s opener, threw 14 touchdowns and just one interception during that stretch last season.

That tailed off to 256 net yards per game – third among teams to play multiple playoff games – in the postseason as the standard of opposition improved, but the reality is his decision to leave New England for Tampa Bay rejuvenated Brady as a downfield passer.

Only Deshaun Watson (69) and Mahomes (67) had more completions of 20 yards or more than the 63 produced by Brady, who also ranked fourth in air yards per attempt (9.50) among quarterbacks with at least 100 passes but was able to protect the ball while going deep more often. His pickable pass percentage of 2.20 was second behind Alex Smith.

He will again have the benefit of arguably the deepest wide receiver corps in the NFL in his 22nd season. The Bucs franchise-tagged Chris Godwin to keep him around while also re-signing Antonio Brown (both had TDs in the opener) and Brady will surely be confident of furthering his rapport with the former, who registered a burn on 72.6% of his targets last year. That tied for seventh among receivers with at least 50 targets.

With Brady seemingly gaining new life midway through his fifth decade and turning the Tampa offense into a juggernaut late last season and Mahomes set to enjoy what should be a much higher standard of protection, the stage is set for a potential shootout should these teams book a rematch in five months.

The Chiefs have almost always been able to rely on outscoring their opponents. Yet, in a possible aerial duel with Brady and the Bucs, it is their defense, which ranked 18th with 6.42 yards per pass play allowed last season, that looks the most vulnerable. 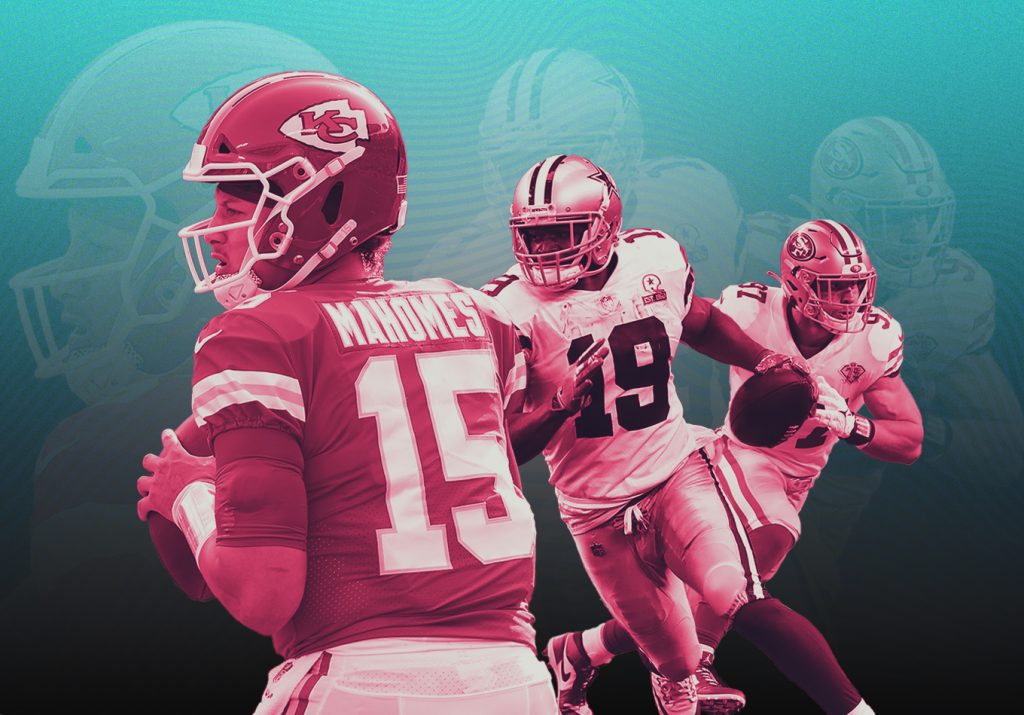 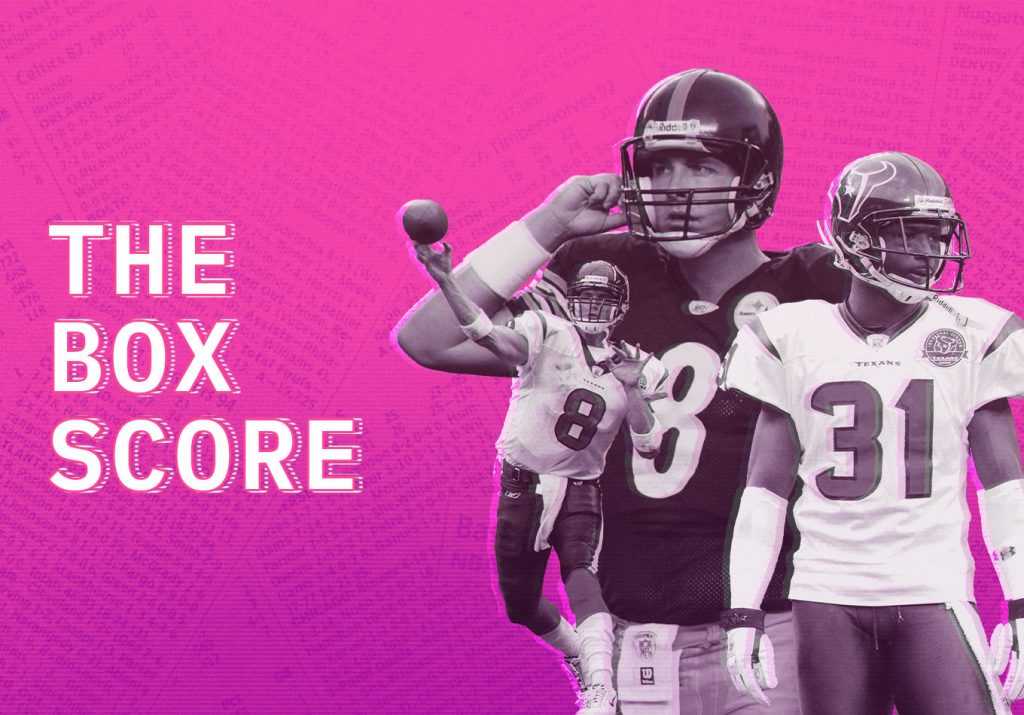 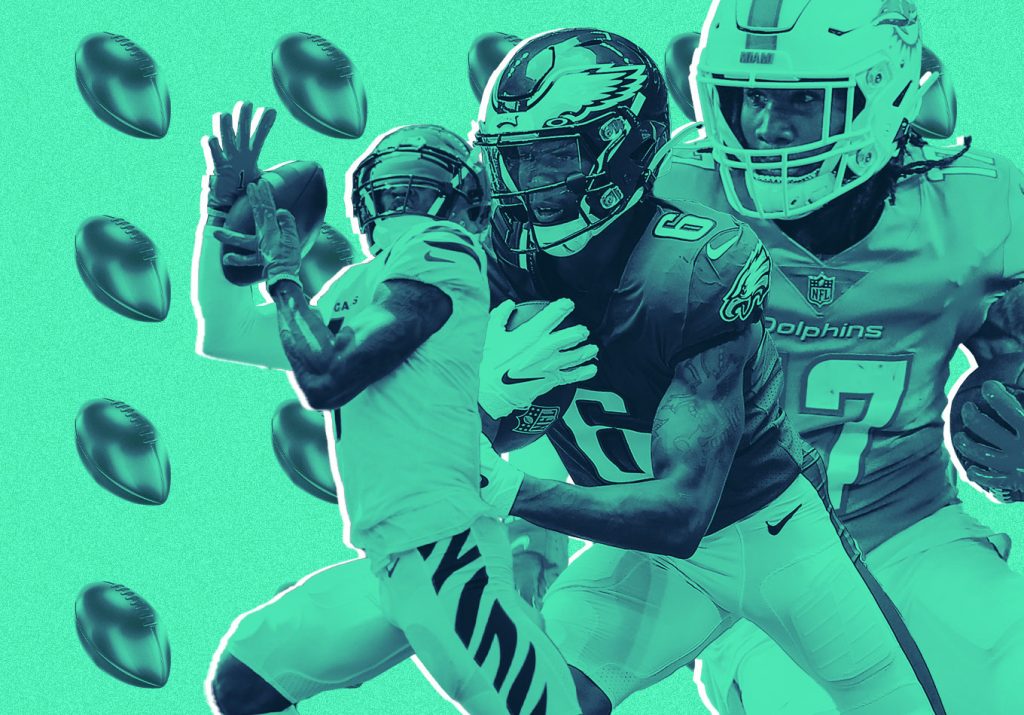 Nickel Coverage: What the Rise of the Rookie Wideouts Means for Future NFL Drafts 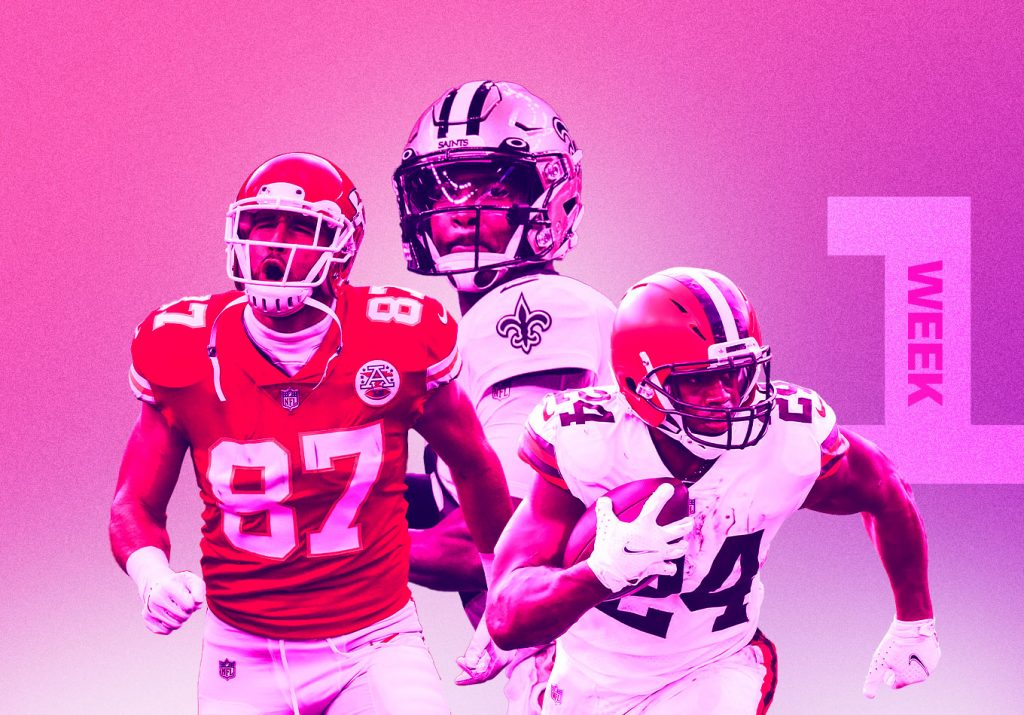 Cover 3: The Must-See Matchups of the NFL’s Opening Weekend