The Yays and Nays: Our Week 1 Fantasy Football Projections | The Analyst 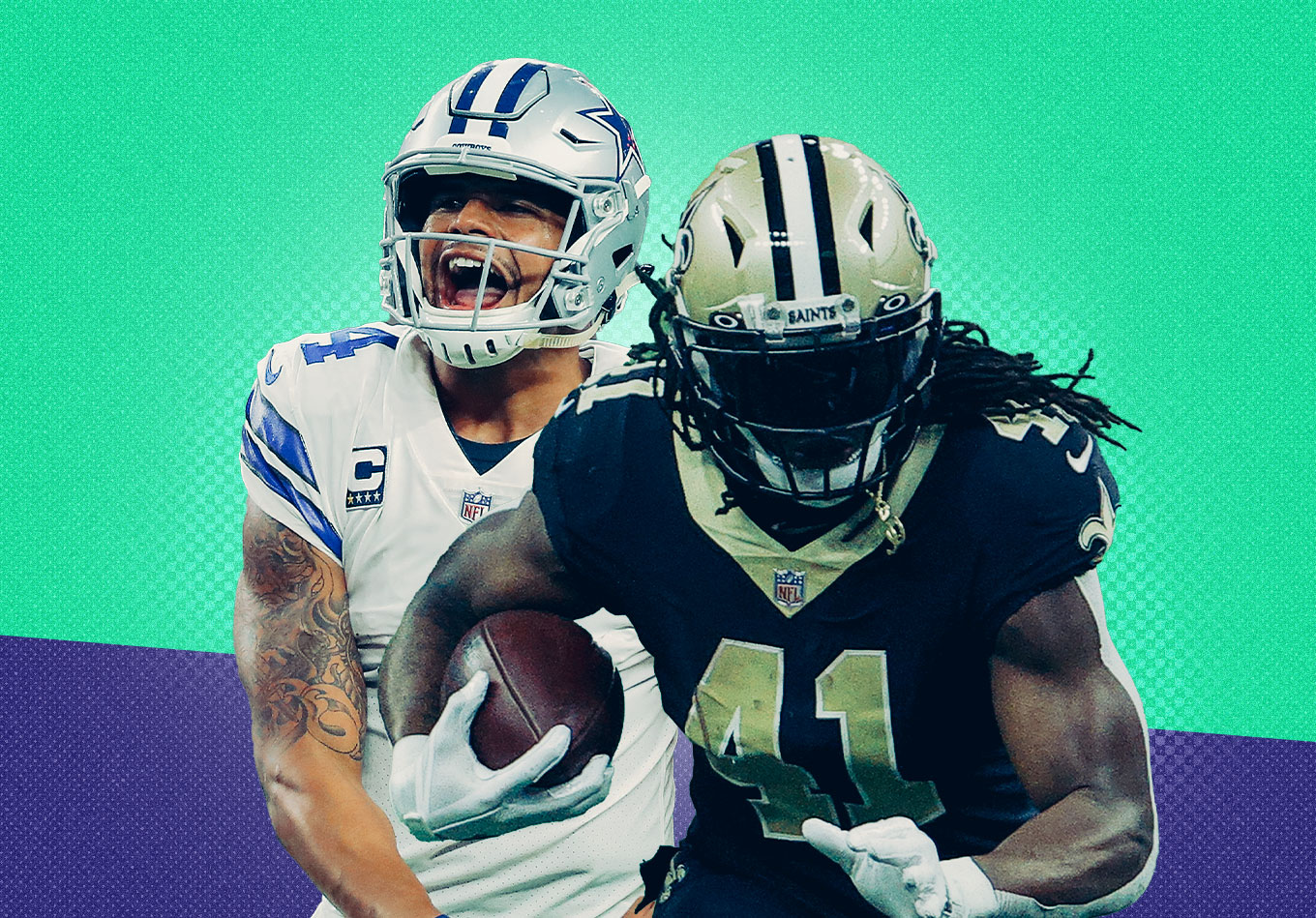 The Yays and Nays: Our Week 1 Fantasy Football Projections

The wait is finally over.

Week 1 of the NFL season is here, which means Week 1 of the fantasy football season is here. What to expect here each week: some of the top data-driven projections available using several of our AI-powered models, some DFS value picks and, of course, some fantasy yays and nays.

No fancy intro is necessary. Let’s dig in and evaluate some Week 1 projections, which were current as of Thursday, 12 p.m. ET.

Patrick Mahomes (KC) vs. CLE: For what is the first, and almost assuredly not the final time this season, Mahomes leads our Week 1 quarterback rankings. He scored at least 18 fantasy points in 14 of his 15 games last season, giving him the highest floor of any quarterback. Of course, he can also explode at any time. His 40 fantasy points in a stunning showing vs Baltimore in Week 3 last season was the highest-scoring performance by any quarterback all season.

No need to overthink this. Mahomes is the class of the position and our top projected scorer of the week.

Alvin Kamara (NO) vs. GB: With the news of Latavius Murray’s release in New Orleans, Kamara is primed to have a monster season. That starts in Week 1, as Kamara may have to carry a New Orleans offense that will need to score to keep up with the Packers.

Despite only being projected for 11 carries this week, Kamara’s true value comes as a pass-catching weapon, where his 2,824 receiving yards leads the position since 2017. With a career average of just over 5.4 receptions per game, Kamara starts with an excellent floor. Combined with his prowess with the ball in his hands, Kamara was third in missed tackles forced (55) and broken tackles (15) in 2020, Kamara is a dynamic option each and every week.

As the undisputed top weapon in New Orleans’ offense, Kamara is a strong candidate to lead all non-QBs in fantasy points.

Their reward: a salivating Week 1 matchup against the Andy Dalton – and not Justin Fields – led Chicago Bears. Facing what is projected to be one of the poorest offensive lines in the league, Donald and Leonard Floyd will look to pin their ears back and attack the quarterback, leading a defense that finished second in sacks last season. Dalton, who threw eight interceptions in nine starts last season, also faces a difficult proposition as Ramsey will likely shadow his best weapon, wide receiver Allen Robinson, for much of the game.

These teams have played in each of the last two seasons and the Bears have scored 17 combined points in both matchups. If you have the Rams, you can greedily hope for a strong fantasy performance.

Note: The ranking to which we compare ours in this piece is the expert consensus ranking (ECR) from Fantasy Pros. These rankings update throughout the week. (We pulled these numbers from Wednesday.) Once again, we are using PPR unless noted otherwise.

Dak Prescott, QB (DAL) vs TB (ECR: 10, Our Rank: 4): There are industry-wide concerns about Prescott. Coming off a gruesome injury and having to face a fearsome Tampa defense, it is understandable that his ECR for Week 1 would be all the way down at 10. While we hold the same concerns, we see the talent surrounding Prescott and his superhuman performance before he got injured last year and believe he is primed for a great start to the season.

The Bucs, who are bringing back all 11 defensive starters, have been the NFL’s best rush defense by a wide margin over the last two seasons, allowing less than 81.0 yards per game in each of them. Meanwhile, during Prescott’s four healthy games last season, the Cowboys threw the ball 201 times in four games. 201! He averaged 422.5 passing yards in those games.

To stay with that Bucs offense, Dallas is going to need to score, and they’re going to have to do it through the air. With tons of talent on the outside, Prescott is a top-five play this week.

Melvin Gordon III, RB (DEN) vs NYG (ECR: 30, Our Rank: 18): Javonte Williams may be the future in Denver, but in a potentially low-scoring game that Denver’s defense will be looking to dominate, our bet is on head coach Vic Fangio riding the experienced RB option in Week 1.

In the second half of the 2020 season, Gordon averaged an even 5.0 yards per carry and scored five touchdowns in eight games. With just five running backs more likely to score a touchdown this week, we like him to carry that level of play over to Week 1 of this year.

Matthew Stafford is going to help this offense explode. Kupp is a top-10 wide receiver play this week.

Amari Cooper, WR (DAL) vs TB (ECR: 21, Our Rank: 10): For a lot of the same reasons we like Prescott, we also like Cooper. If Dallas does indeed struggle to run – likely given the stout rushing defense out of Tampa the last two seasons – the Cowboys are going to rely on the passing attack.

In Cooper’s four games with Prescott last season, he received an absurd 51 targets, turning that volume into 37 receptions for 401 yards and a touchdown. In his last 16 games with Prescott as the Cowboys quarterback, Cooper has been targeted 9.3 times per game.

We like Cooper’s chances of turning those targets into solid production. He has WR1 potential this week.

Jalen Hurts, QB (PHI) vs ATL (ECR: 8, Our Rank: 19): Numerous factors worked against Hurts during his rookie season. He played behind a patchwork offensive line and his weapons were, well, hurting. That said, Hurts completed just 52% of his passes last season. That was the lowest of any quarterback with 100 passing attempts.

Even with only Lamar Jackson and Kyler Murray projected to run for more yards than Hurts this week, Hurts’ inefficient play has us skeptical as we enter the new season. Combined with Atlanta’s strong defense to end last year (aside from when they played Tampa, Atlanta only allowed 19.2 points per game in their final eight games), Hurts is a high-risk play this week.

Joe Mixon, RB (CIN) vs MIN (ECR: 7, Our Rank: 15): One of the reasons the Bengals were so pass happy with Joe Burrow at quarterback last season was their abysmal offensive line play. As the new season is upon us, Cincinnati is once again projected to have the worst offensive line run blocking in the league. Running behind an offensive line that struggles to block is a recipe for disaster.

With a career rushing average of only 4.1 yards per carry and an average of 2.6 receptions per game, Mixon is likely to struggle to put up RB1 numbers, unless he receives a significant volume. Unfortunately for Mixon owners, it’s unlikely he gets more than 20 touches in this game. Without it, Mixon is going to be touchdown-dependent. Be careful hoping for RB1 numbers from Mixon this week.

Julio Jones, WR (TEN) vs ARI (ECR: 12, Our Rank: 24): This is all about speculation. If you strip away the name brand, what we have is a player who’s going to be the second wide receiver in an offense that ran the ball the second most in the NFL last season.

He will undoubtedly be a Hall of Famer one day and he’ll probably only make the Titans offense more explosive, but in terms of fantasy performance, he may struggle to get targets. And on top of having to fight A.J. Brown for targets, they are facing an Arizona team that gave up the eighth-most yards per carry last season (4.61). The offensive game plan will likely be Derrick Henry-intensive to keep Kyler Murray off the field. Jones is a low-end WR2 this week.

Chase Edmonds, RB (ARI) vs TEN (DK Price: 4,600): Our top RB value of the week, Edmonds’ low price is likely due to some concern over how the Cardinals’ backfield will split touches. As the lead pass-catching option out of the backfield at least, Edmonds doesn’t need a ton of volume to become a good value and if he can find the end zone in what could be a good Arizona offense, he could blow away his low price point.

Marquez Callaway, WR (NO) vs GB (DK Price: 3,400): The top wide receiver for a Sean Payton-led team that has notable chucker Jameis Winston at quarterback seems like a good proposition. At only $3,400, Callaway has the floor of being the top WR option, while also having the chance to potentially explode. He is worth the flier in DFS for Week 1.

Marvin Jones Jr, WR (JAX) vs HOU (DK Price: 3,600): Like Callaway above, Jones is likely the Jaguars top wide receiver option in Week 1. Playing a Houston defense that struggled to stop anyone last season, Jones is well worth his low price of $3,600 as the safety option for Trevor Lawrence in his debut.

Keenan Allen, WR (LAC) vs WSH: (DK Price: 6,900): Our highest-ranked player to be a good value play, Allen is going for $1,400 less than Davante Adams. Projected to see the second-most targets of any player in football this week, Allen could easily have a top-three week at wide receiver. With the ninth highest price among wide receivers, he is a strong candidate to build your team around.