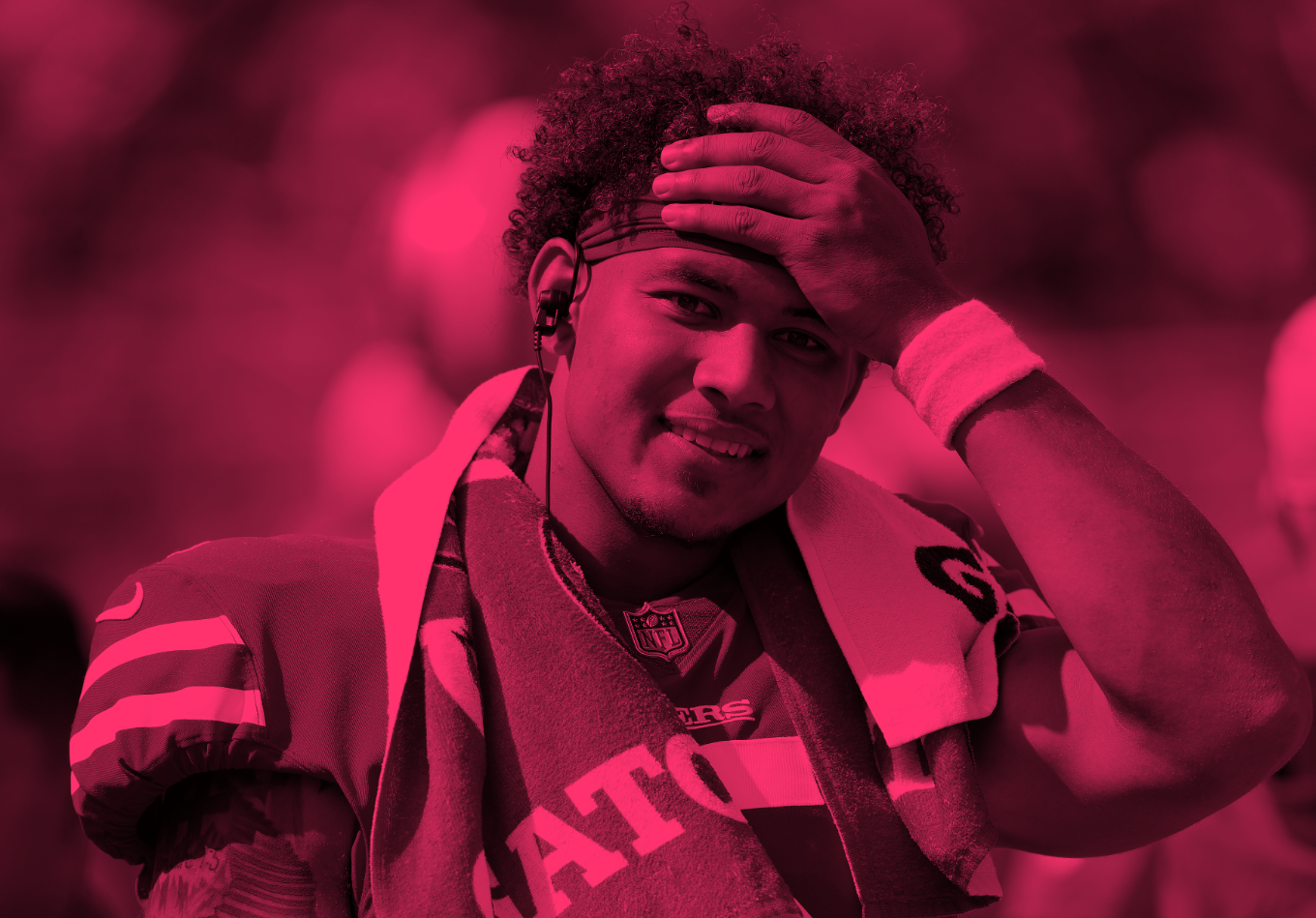 San Francisco Dreaming: Is It Time for the 49ers to Turn to Trey?

The San Francisco 49ers are among the ranks of the seven teams to start the season unbeaten, with victories – albeit expected ones – over the Detroit Lions and Philadelphia Eagles underlining their status as playoff contenders.

Though there is satisfaction regarding their start, outside of the 49ers’ facility questions about when the Niners should bench starting quarterback Jimmy Garoppolo in favor of Trey Lance are starting to increase.

That there is an external desire for the Niners to turn to Lance is no surprise given San Francisco traded three first-round picks to move up from 12 to three in this year’s draft to earn the right to select him as their quarterback of the future.

Lance also offers a dual-threat skill set beyond that of Garoppolo, who had 11 rushes against the Eagles but did his most impactful work on the ground on quarterback sneaks, including one for a touchdown.

Garoppolo’s display in the win over Philadelphia is a reason for the growing calls for Lance. After an offensive explosion against the Lions, the Niners averaged only 4.5 yards per play in their 17-11 win at Lincoln Financial Field.

That kind of offensive production will not put San Francisco in the Super Bowl mix and with the Niners about to take on a difficult section of their schedule, it does beg the question, when should head coach Kyle Shanahan hand the keys over to their inexperienced but high-upside rookie?

Though he threw the 49ers’ first touchdown of the season with his first career pass against the Lions, Lance’s true potential has yet to be seen at the NFL level.

In terms of the extra diversity he should provide the Niners as a running threat, that appears likely to change in Week 3 against the Green Bay Packers in a primetime clash that starts an imposing three-game stretch that will also see them face two divisional foes in the Seattle Seahawks and the Arizona Cardinals.

Lance’s combination of size and speed enabled him to average 6.5 yards per carry in his lone full season as a starter for North Dakota State in 2019, putting him fifth among all quarterbacks at the FBS and FCS levels. His touchdown tally of 14 was tied for fifth.

With the 49ers in the midst of an injury crisis at running back that may see only one player at the position (Trey Sermon) against the Packers, the window is very much open for San Francisco to utilize Lance’s gifts on the ground versus an opponent allowing 4.81 yards per rush – seventh-most in the NFL – through the first two games.

Green Bay gave up 46 yards on four carries to Lions quarterback Jared Goff in its win on Monday. Goff is nowhere close to being in the same realm as Lance as an athlete and it is tough to envision Shanahan watching that game film and not wanting to unleash his rookie on the Packers’ defense.

Even with San Francisco lacking healthy bodies at running back, the 49ers’ rushing attack could be spectacular against Green Bay with Lance infused into it. However, after an up and down start to the year from Garoppolo, fans may want to see what the man picked to be the long-term face of the franchise can do through the air as well.

Garoppolo was superb in Week 1, gashing the Lions to the tune of 314 passing yards and a touchdown, averaging 12.56 yards per attempt.

He added a league-high 5.49 yards per attempt in expected passing situations versus Detroit. However, in a low-scoring struggle against the Eagles, Garoppolo came back down to earth.

Indeed, he finished with just 189 yards and a touchdown, averaging 6.3 yards per pass attempt. His rate of yards added in expected passing situations dropped to 0.358, 20th among quarterbacks to have played in Week 2.

Still, those two contrasting performances averaged out to leave Garoppolo sixth in that metric prior to the start of Week 3 on Thursday. Additionally, Garoppolo is delivering an accurate well-thrown ball 82.7% of the time, the ninth-best ratio among quarterbacks with at least 10 passing attempts.

Yet for all the good Garoppolo has done so far in 2021, it was tough not to leave Week 2 with the feeling that the Niners’ passing game is being limited by keeping Lance on the sideline.

Grinding out games against an imposing defensive front for a narrow victory is satisfactory early in the season. However, a lack of explosiveness that was all too evident for the Niners in Philadelphia will not be acceptable in duels with opposing offenses that can move the ball against DeMeco Ryans’ defense, which held the Eagles to just 177 net yards passing.

While Garoppolo’s well-thrown percentage in Week 2 was an impressive 86.7%, he averaged a league-low 3.47 air yards per attempt as San Francisco’s game plan was built around getting the ball out quickly to keep the Eagles’ pass rush from making an impact.

It worked as Garoppolo was pressured only nine times and did not suffer a single sack. Despite stellar protection from his offensive line and a game plan where he was rarely required to push the ball down the field, Garoppolo still threw a pair of pickable passes.

The task of making short throws accurate is not a difficult one by the lofty standards to which NFL players are held. Garoppolo succeeded in that task and led the 49ers on two decisive long touchdown drives of 97 and 92 yards that helped clinch the victory.

But he still risked turning the ball over in the process and when asked to complete more difficult throws, was unable to rise to the challenge.

Garoppolo sailed a far-hash deep out throw over the head of Mohamed Sanu, was almost intercepted on a throw too high for Brandon Aiyuk running a post delivered with pressure from Josh Sweat, sent another deep out wide of an open Trent Sherfield from a clean pocket and went close to being picked by Darius Slay on a far-hash ball thrown behind Deebo Samuel.

To Garoppolo’s credit, he demonstrated mobility he’s not regarded for to evade pressure and avoid negative plays and produced a perfect ball on the Niners’ first touchdown drive, hitting Samuel in stride on a throw between two linebackers and setting San Francisco up inside the red zone after the defense had just delivered a goal-line stand to deny Philadelphia in a turning point in the game.

Though he can complete such passes with impressive accuracy and regularly excels doing what is asked of him, consistency on the higher-difficulty attempts has continually eluded Garoppolo and in an NFC where Aaron Rodgers’ Packers, Tom Brady and the defending champion Tampa Bay Buccaneers and the Matthew Stafford-led Los Angeles Rams are all contenders, the Niners realistically need a quarterback who can frequently hit on explosive plays with his arm.

Lance is raw and might not have handled the situation in Philadelphia with the same composure as Garoppolo, but he is a quarterback for whom the big-time throws come naturally and one who likely would have connected on those string of misses from San Francisco’s starter.

With the Packers and the Seahawks each allowing over six yards per pass play, the next two weeks present an ideal opportunity for Garoppolo to prove himself as a consistent downfield passer.

A potential reluctance to throw Lance in against a division rival like Seattle means Garoppolo should get at least the next two games, yet if he cannot take advantage of those opportunities, Shanahan may be forced to turn to the heir apparent at quarterback to ensure a playoff-caliber roster stays near the top of both a loaded NFC West division and an ultra-competitive conference.

Even in a raucous road environment, an Arizona defense that gave up 7.0 yards per pass play to the Minnesota Vikings in Week 2 would appear to be a close to perfect opponent against whom to give Lance his first start.

Could Week 5 see a matchup of two of the most exciting dual-threat prospects to enter the NFL in recent years? The answer may rest on the performance of the oft-criticised arm of Garoppolo in two crucial in-conference showdowns.