Will an Extra Game Spell the End for Eric Dickerson's 36-Year-Old Rushing Record? | The Analyst 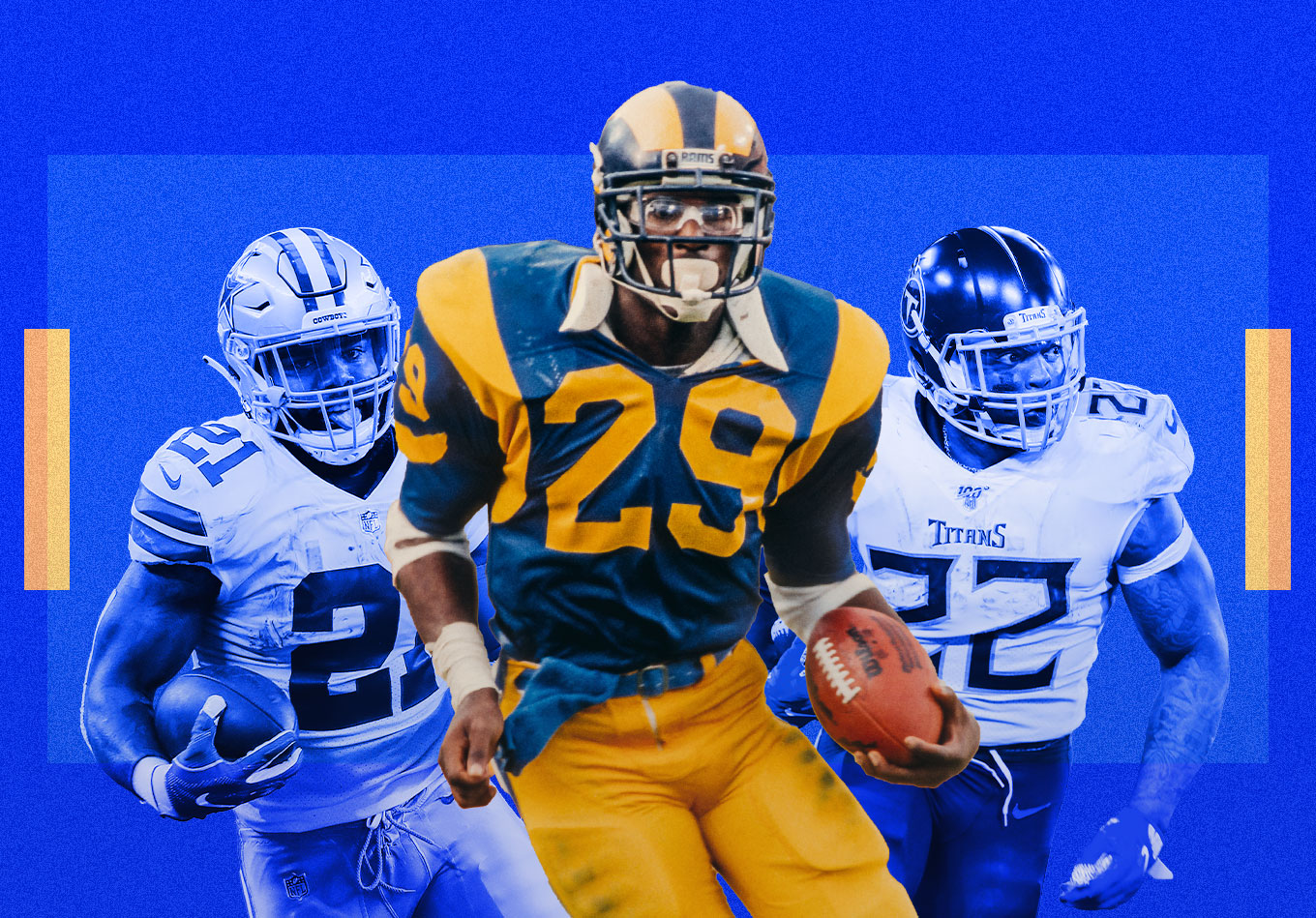 Will an Extra Game Spell the End for Eric Dickerson’s 36-Year-Old Rushing Record?

Dickerson looks back at his magical run to the NFL’s single-season rushing record in 1984 and has an idea about who could pass his mark now that the regular season has been extended to 17 games.

Eric Dickerson will mark his 61st birthday just a week before the opening of the NFL’s 102nd season on Sept. 9. And as has been the case for the last 36 of his 60 previous birthdays, he will celebrate the occasion secure in the knowledge that he still stands on the mountaintop.

For 36 years now, Dickerson has watched all manner of running backs (and maybe, someday soon, a quarterback?) take aim at him. Dickerson accumulated an NFL-record 2,105 rushing yards for the Los Angeles Rams back in 1984. In the years since he has seen challengers come close, but no one has knocked him off the top perch.

But now, with the NFL expanding its regular season from 16 to 17 games, will that additional game be the boost that some enterprising runner uses to knock Dickerson, a first-ballot Hall of Fame selection in 1999, out of the top spot?

To set an NFL record of any sort is noteworthy. Barely an autumn Sunday blends into Monday without some player earning credit for “moving up” on some list or another, or joining some statistical “club,” or even perhaps doing something within a single game or streak of games that no NFL player had done previously. That’s all well and good. But there are records and then there are records, and few records have the cache of “Most Rushing Yards, Season.” That’s not merely a record, it’s a monumental achievement.

“I always figured that someone would break the season record before someone broke the rookie record, and I still think that.”

A frequently asked question, across all sports, is “How many records are there, and who holds the most of them?” Without being flippant, there is, of course, no certain answer to either of those questions. “How many records are there?” is similar to asking “How many fractions are there between the numbers six and seven?” New research begets new records, and there are no limits. Let Johnny Hekker average 60 yards per punt over the first five games of this season and research will shortly thereafter determine the record for the highest punting average through the first five games of a season. Or six games, or eight, or 12. Trust us, it’s the world we live in.

But to give you an idea, the NFL Record and Fact Book lists 68 different individual single-season records for the most of something, or the highest or lowest average or rating of something. (This total does not even include rookie records; there are an additional 35 of those listed in the R&F Book.) A look through those records provides confidence to assert that no current NFL single-season record-holder has owned a record as important as Dickerson’s for as long a span.

Thirty-six years. “That is a long time,” Dickerson recently reflected. But it turns out that he possesses another record that he thinks will be even more difficult to break. “I always figured that someone would break the season record before someone broke the rookie record, and I still think that.” Dickerson was referring to the NFL’s record for rushing yards in a rookie season, which he also holds (1,808 yards in 1983, the year before he ran for 2,105).

The facts seem to bear out Dickerson’s thinking: While six challengers to his season record of 2,105 yards have reached the 2,000-yard mark and, in 2012, Adrian Peterson finished just eight yards shy of Dickerson’s total, no challenger has come within 170 yards of Eric’s rookie-record total of 1,808. Ezekiel Elliott came the closest, with 1,631 in his pro debut in 2016.

Dickerson grew up in Sealy, Texas, some 50 miles from Houston, starred at the local high school and then at Southern Methodist University. He turned pro in 1983 and picked the Rams, who had chosen him with the second pick in the NFL Draft, over the rival Los Angeles Express of the new United States Football League. (That NFL Draft was the so-called “Quarterback Draft,” with six QBs chosen in the first round, most notably future Hall-of-Famers John Elway (the top pick), Dan Marino and Jim Kelly.)

Dickerson hit the ground running, you might say, setting rookie records for carries (390), rushing yards (1,808) and rushing touchdowns (18), all of which still stand. As an encore, in his second season, he increased his output by nearly 300 yards on 11 fewer carries and broke the NFL single-season mark of 2,003 yards that had been established by O. J. Simpson 11 years earlier.

Pro football has become far less rushing-oriented and far more passing-dependent since Simpson and Dickerson had their 2,000-yard seasons. Indeed, by 1984, when Dickerson ran for 2,105 yards, many coaches had already started converting their offenses to a pass-first mentality, but not so for John Robinson’s Rams. During that season, the Rams ran on over 58% of their offensive plays and gained more rushing yards than passing yards in 12 of their 16 games.

Dickerson had 1,792 yards through his first 14 games of the season, and he broke the record by picking up a season-high 215 yards in the 15th game (the Rams’ final home game of the year) against the Houston Oilers. Including 98 yards in the season finale, Dickerson’s total for the season settled in at 2,105 yards.

Through the years, Dickerson always took care (as he still does) to point out that he broke Simpson’s record with the benefit of two additional games. (As a senior at Sealy High School in Texas in 1978, Dickerson ran for over 2,000 yards – a fact that he shared with Simpson, then his football idol, when the two future Hall of Famers met when the heralded high-schooler visited USC on a recruiting trip during his senior year. “I want to break your record one day,” the youngster told the veteran. And so he did.)

The six challengers to Dickerson’s record who attained the 2,000-yard plateau were Barry Sanders (in 1997), Terrell Davis (1998), Jamal Lewis (2003), Chris Johnson (2009), Peterson (2012) and Derrick Henry (2020). Sanders, Lewis and Peterson had been first-round, top-10 draft picks; Johnson was drafted later in the first round, Henry was a second-rounder and Davis a sixth-rounder. Johnson was playing in his second NFL season, Lewis and Davis in their fourth, Henry in his fifth, Peterson in his sixth and Sanders in his ninth. All six were in their 20s, with Sanders the oldest at 29. Each had produced at least one previous 1,000-yard season. In fact, in a cumulative total of 23 previous NFL seasons (prior to their 2,000-yard seasons), those six players had reached the 1,000-yard mark a total of 20 times.

Each of those six players reached the 2,000-yard mark in his final game of the regular season, with each producing a 100-yard game in the season finale. Among the challengers, Lewis brought the highest total into that last game (1,952 yards). Needing 153 yards to equal Dickerson, Lewis had to settle for 114 yards and a season total of 2,066, at the time the second highest in NFL history (now the third best). At the opposite extreme was Henry, who brought “only” 1,777 yards into the finale, the lowest total in history for a player who finished in the 2K Club. Henry then ran for 250 yards in leading the Tennessee Titans to a division-clinching victory at Houston.

“I remember (longtime Rams teammate) Jackie Slater calling me saying, ‘Aren’t you watching this game?’ That’s really when I realized how much the record still meant to my friends and former teammates”

So that’s how Dickerson’s principal challengers finished their seasons. How did they start those seasons? Last September, Henry ran for 116 yards in the season opener at Denver. Remarkably, among the six players since Dickerson who have produced 2,000-yard seasons, Henry is the only one who reached triple-figures in his first game of the season! Peterson had run for 84 yards in the season opener; Johnson, 57; Lewis, 69; Davis, 75; and Sanders ran for a mere 33 yards on 15 carries to start the 1997 season (and then gained just 20 yards on 10 carries the next week).

Peterson’s challenge in 2012 provided substantial late-game drama. With a win over the Green Bay Packers, Peterson’s Minnesota Vikings would secure a playoff berth. On a personal level, his season total of rushing yards, which stood at 1,898 entering the game, had increased to 2,061 as his team started its final possession of the game at its own 28-yard line, tied at 34, with 2:45 to play. Peterson gained 10 yards on four runs as the drive progressed until the Vikings faced 2nd-and-10 at Green Bay’s 37 with 24 seconds remaining. Peterson took the handoff, saw an opening, and ran to the 11-yard line, where he was brought down.

The clock ran down to three seconds when the Vikings called timeout and won the game on a field goal at the gun. Peterson’s final run of the season had brought him to 2,097 yards, the second-highest total in NFL history, and his team had made the playoffs. However, he finished eight yards shy of Dickerson’s record.

So where was Dickerson during the final moments of Peterson’s pursuit of his long-held record? Biting his nails in front of his TV? Hardly. “It was right after Christmas and I was in Toys R Us, where I had taken my daughter to return some gifts. I kept getting all these calls on my phone. I remember (longtime Rams teammate) Jackie Slater calling me saying, ‘Aren’t you watching this game?’ That’s really when I realized how much the record still meant to my friends and former teammates”

When asked who he thought might be the top contender to breaking his record in the first year of the 17-game schedule, Eric’s answer was hardly a surprise. “Derrick Henry.” A logical choice for sure. Not only did Henry exceed 2,000 yards last season, but he led his nearest competitor on the rushing-yards leaderboard, Dalvin Cook, by a margin of 470 yards. Moreover, Henry and Cook were the only players to reach 1,200 yards last year.

Dickerson commented on Henry, “He reminds me a little of myself. He’s tall like I was, and such a strong runner. Plus his team relies on him a lot.” Yes, a workhorse quite like Dickerson himself, who had 379 carries in 1984 (and had higher totals than that in three other seasons); Henry toted the ball 378 times last season.

There’s also one other running back whom Dickerson singled out as a possible contender – the New York Giants’ Saquon Barkley. Even though Barkley has incurred some significant injuries – a high ankle sprain in 2019 and then a disabling ACL tear early last season – Dickerson cites Barkley’s strength and ability in making him a viable candidate for chasing the record. “I could see him getting it with the right line and in the right situation.”

Meanwhile, 36 years have gone by with Dickerson’s name atop the list. Back in the 1920s, the NFL’s first decade, it was baseball’s Babe Ruth who generated nationwide interest in records by regularly upping the ante on the standard for home runs in a season. While with the Boston Red Sox, Ruth had set a major-league mark with 29 homers in 1919, and then, after being dealt to the New York Yankees, he raised the bar to 54 in 1920, 59 in 1921, and then 60 in 1927.

No major-leaguer could match that total over the next 33 seasons until Roger Maris belted 61 in 1961 – the first year after an increase in the schedule length from 154 to 162 games. The Maris record remained unequaled through the next 36 summers until both Mark McGwire (70) and Sammy Sosa (66) surpassed it in 1998. (Three years later, Barry Bonds established the current one-season record with 73.)

If someone does finally push Dickerson off that mountaintop, well, everyone would agree, appropriately, that he has had a great run.