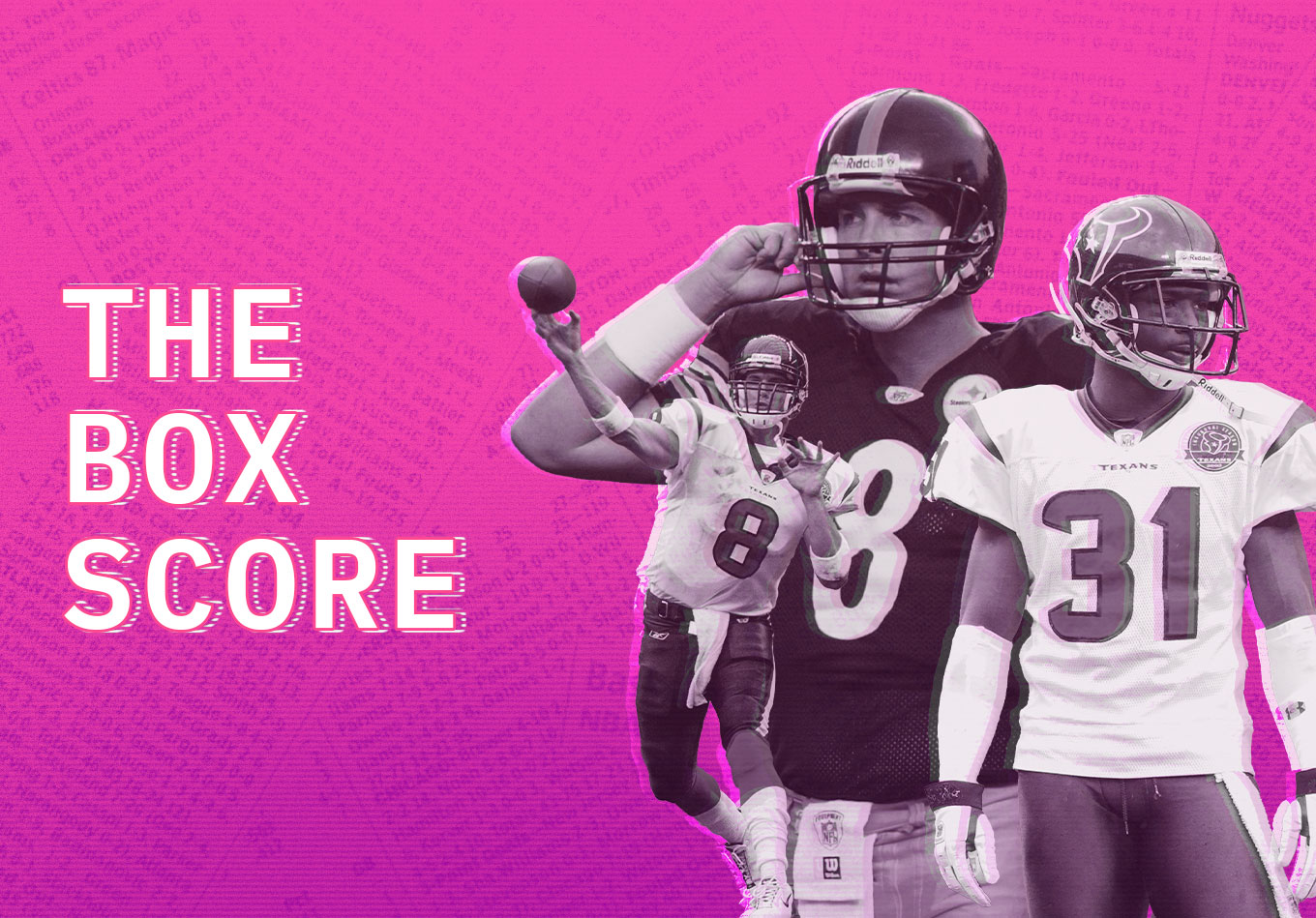 It was two months shy of a decade after Tommy Maddox made his fourth NFL start – a 27-17 loss at Buffalo on December 12, 1992 – that he took the first snap under center again in America’s most popular professional sports league.

What happened in between? Oh, not too much, unless you consider washing out as a former first-round pick, playing in two fledgling semi-pro leagues – winning the MVP in one of them – and becoming an insurance salesman as noteworthy events.

Maddox’s NFL resurrection was one of the biggest stories of the 2002 NFL calendar, as the face of Vince McMahon’s XFL parlayed his success in the lone campaign of the wrestling magnate’s offseason ratings attempt into a contract to back up Kordell Stewart in Pittsburgh.

Maddox knew his way around a clipboard from his days backing up John Elway in Denver – and, less notably, Chris Chandler and Chris Miller with the Los Angeles Rams and Dave Brown with the New York Giants – so it was a low-risk signing for the Steelers to bring him in at the league minimum to serve as an, um, insurance policy for the up-and-down Stewart.

“Slash,” as they called the multipurpose Stewart in the Steel City, had revived his own career in 2001 after three straight non-playoff seasons, but a poor performance in an AFC championship game loss to the New England Patriots gave a city of black-and-gold diehards – not to mention Bill Cowher – motivation to keep a short leash on the hybrid QB heading into 2002.

The Steelers were abysmal offensively early on and were staring at an 0-3 start before Maddox relieved Stewart in the second half against the Cleveland Browns in Week 4. Touchdown Tommy found Plaxico Burress for a 10-yard TD to tie the score late in the fourth, Pittsburgh won 16-13 in overtime and Cowher made the move official: Maddox would start Week 5 at New Orleans.

Over the next nine weeks, the Steelers were the third-highest scoring team in the NFL, averaging 28.4 points while going 6-2-1 in that stretch to seize control of the AFC North. But the Maddox comeback story very nearly came to a sickening end in Week 12.

Maddox suffered a concussion and spinal cord contusion on the final play of the third quarter in Tennessee, losing consciousness. He was briefly paralyzed and had to leave the field in an ambulance that day in Nashville, but somehow missed only two games before being pronounced good to go for Week 14 at home.

Stewart had led the team to two wins in Maddox’s absence, and now the league’s feel-good story could put Pittsburgh a step closer to clinching the AFC North. All that stood in the way was the 3-9 expansion Houston Texans, the NFL’s lowest-scoring team.

The Texans got the ball first and surprisingly drove into Steelers territory, but a pair of Jason Gildon sacks took Houston out of potential field-goal range and forced a punt. Chad Stanley drilled the ball inside Pittsburgh’s 5, and a holding penalty made Cowher’s team start its first possession on its own 2-yard line.

Maddox escaped some pressure from a shotgun snap and began to scramble to his right, keeping his eyes downfield as he searched for Ward and Burress, the Steelers’ two 1,300-yard receivers. He couldn’t find either, and just when it looked like he’d run to the sidelines and bring up fourth down, Maddox tried to cut back to pick up extra yardage.

The football didn’t come with him. Maddox dropped it, Kenny Wright scooped it up and ran 40 yards, and the Texans had a 7-0 lead.

Pittsburgh converted two more third downs on its next drive and made it to the edge of field-goal range before Jerome Bettis lost a yard on a first down carry from Houston’s 34. On second and 11, Maddox dropped back, looking for Burress on a quick slant.

Aaron Glenn read the throw from the snap. He stepped in front of Burress, picked the pass and sped down the left sideline with only Maddox to beat. Just one possession after the Texans scored the first defensive touchdown in franchise history, they had their second. Heinz Field, which had spent years screaming for someone to replace Stewart, suddenly didn’t know what to do with itself.

In reality, rookie wide receiver and former college QB Antwaan Randle El was the third-string quarterback on a team that didn’t officially carry one, so perhaps it’s fitting that the next turnover came at his hands. Randle El caught a 13-yard pass at the Houston 23 just five plays into the second quarter but fumbled, giving Pittsburgh its third turnover in as many possessions.

The Steelers got a pair of Jeff Reed field goals sandwiched around halftime, and that 14-6 Texans lead carried into the fourth quarter. Maddox led Pittsburgh down to the Houston 25 before three straight incompletions, then Reed missed a 43-yarder – one of the rookie’s two failed field-goal attempts all season – to keep the Texans’ lead at eight.

Houston’s Jabar Gaffney fumbled a punt midway through the fourth that gave the Steelers life. But Pittsburgh couldn’t get closer than the Texans’ 18, which is where Maddox was sacked for an 8-yard loss on fourth and 3 with 5:44 left.

Randle El fumbled a punt after a Houston three-and-out, and though the Texans lost 5 yards from there, Kris Brown nailed a 43-yard field goal to give his team a 17-6 lead with 3:40 to play.

His two key fumbles aside, Randle El ended up having a historic impact on this contest. He’s one of only four players since 1960 to throw a pass, have a rushing attempt, catch at least eight passes, and return both a punt and a kickoff in the same game.

After Brown’s field goal, Maddox had one more possession to make up for his miserable day, but instead he relived the same nightmare almost step for step from the first half.

On fourth and 2 from the Houston 38, he threw a slant intended for Terance Mathis and again hit Glenn right between the numbers. To the house he went again – 65 yards this time after taking it back 70 in the first quarter – with Maddox realizing it was over at about Pittsburgh’s 40-yard line before pulling up.

A few garbage-time yards on a final drive further tipped the statistical scales in the Steelers’ favor, but the scoreboard didn’t move. Houston won 24-6, and combined with Cleveland’s last-second 21-20 win over Jacksonville, Pittsburgh’s division lead was down to a half game with three to play.

It was a score that certainly reverberated around the league. How could an expansion team possibly have come into Heinz Field and whipped a division leader that was led by a QB who was a shoo-in for comeback player of the year?

By delivering one of the most inept offensive performances the league had ever seen.

A Statistical Anomaly That Lives On

Houston’s 47 total yards were the fewest by any team in a win in NFL history, and that remains the case 19 years later. The Texans were outgained 422-47, a 375-yard difference that’s the second-largest deficit since 1950 for any winning team.

“This game was as simple as three plays,” Maddox said. “False starts, holding penalties, they don’t kill you. What kills you is turning the ball over and giving them touchdowns.”

Maddox was sacked six times in the loss, but it was his counterpart that day who was in the midst of being sacked more often than anyone in NFL history. The Steelers’ defense contributed four of rookie David Carr’s season total of 76, which remains a record – one no one other than Carr himself has come within 13 sacks of matching in the ensuing two decades.

Carr completed three passes for 33 yards that day at Heinz Field, all to tight end Billy Miller. Miller remains the only player in the last 38 years to account for all of his team’s completions (minimum three) in a single game.

Players Who Caught All of His Team’s Completions in a Single Game (Min. 3)

“Hold a team to under 50 yards offense, you’d think you’d have a chance to win at least,” Steelers linebacker Joey Porter told the Pittsburgh Post-Gazette after the loss. “To get blown out when that happens, it’s tough.”

Perhaps Maddox came back too early after his terrifying exit in Nashville. He had thrown three interceptions before exiting that game, and after his three turnovers were directly converted to touchdowns against the Texans, Cowher didn’t exactly guarantee that Maddox would be under center the following week.

But he was, leading Pittsburgh to wins in its final three games to clinch the North and cement his status as the league’s comeback player of the year – the first Steeler to win the award.

He’d rally the black and gold again in the wild-card round against the Browns, turning a 33-21 deficit with under five minutes to play into an improbable 36-33 win in regulation.

His Hollywood script of a season ended in the place where his comeback attempt – and his career – looked to be in limbo: Nashville. Maddox was intercepted on his first pass attempt in the divisional round against the Titans, and the Steelers lost 34-31 in overtime.

Maddox went on to start all 16 games in 2003 for a 6-10 team that’s the last incarnation of the Steelers to finish with a losing record. That season in the wilderness put them in position to draft Ben Roethlisberger with the 11th pick in the 2004 draft – the young QB Maddox would back up en route to a 2005 Super Bowl win before retiring.

Three Steelers Super Bowl appearances and two Lombardi Trophies later, it’s easy to forget about Maddox’s surprising season in his return to the league he once washed out of.

But it’s hard to remember a stranger game than Texans 24, Steelers 6.