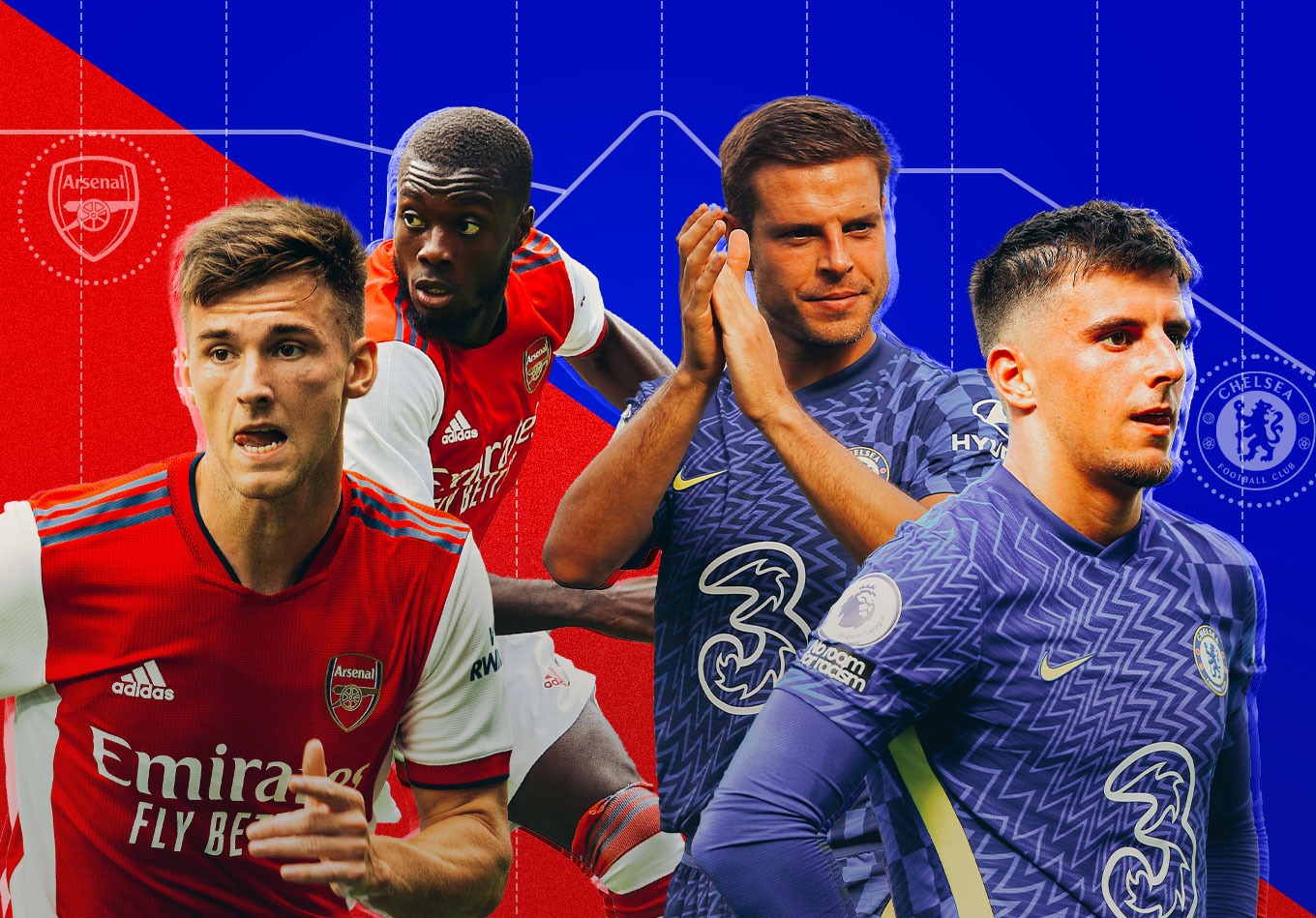 These are two sides whose Premier League fortunes varied drastically on the opening weekend. While Chelsea strolled to a comfortable 3-0 home victory against Crystal Palace, Arsenal succumbed to Brentford in a result that somehow managed to be surprising, yet predictable at the same time.

The schedule gets no kinder for Mikel Arteta’s men, as they host the Blues this weekend before travelling to the Etihad to take on Manchester City. There’s now a very real chance they could enter the September international break with three defeats from three.

With a difficult away game against Liverpool looming, Thomas Tuchel’s men will be eyeing this opportunity to strike against a wounded Arsenal side. But how might they go about doing it?

Here are five tactical trends to look for in the London clash this week.

1. Exposing Ben White in the Air

We should stress that this is not an anti-Ben White section. White has many qualities, particularly in possession, and we outlined here why Arsenal spent £50m on him. But one aspect of his game he’ll need to work on is his ability in the air. At 23 years old, we’re not expecting him to be the finished product just yet. However, until he improves this area of his game, it’s a weakness at the heart of the Arsenal defence that opposition teams will look to exploit.

Brentford forward Ivan Toney certainly did that on Friday night. Toney contested 12 aerial duels against Arsenal, winning seven of them at a 58.3% success rate. No striker won more aerial duels in the opening weekend, while only central defenders Shane Duffy (nine) and Ben Mee (eight) won more across the league. In stark contrast, White won just three out of the eight headed duels he contested (37.5%). Across the opening weekend, no central defender lost more aerial battles than the Arsenal debutant, as he was constantly bullied by Brentford’s strikers.

That meant that Toney consistently allowed Brentford to play long yet retain possession. This happened time and time again on Friday, but one particular example comes from the start of the second half. David Raya goes long from the ball in his hands, clearing to ball up to Toney. The striker backs into White, using his body to shield the ball before flicking on to strike partner Bryan Mbeumo who’s run behind him.

Toney beats White to the header, allowing Mbeumo to pick the ball up in all sorts of space behind Arsenal’s defensive line. Pablo Mari has dropped a little too deep and isn’t close enough to Mbeumo to affect the play, and the Frenchman picks up and ball before turning and bringing teammates into play.

Brentford repeatedly employed this tactic against the Gunners. They went long with 21% of their passes in the opening game, a higher proportion of long balls than any other side.

Looking at the aerial success numbers from last season does support what we saw on Friday, with White winning fewer than 50% of his aerial duels last season, the lowest % out of all Arsenal centre backs last season.

At Brighton, White spent the majority of his time playing as a right centre back in a back three. He had two monsters in Lewis Dunk (6’3”) and Adam Webster (6’3”) playing alongside him, as well as Dan Burn (6’5″). Those players were able to contest the majority of set pieces, long balls with White mopping up. In a back four, however, both centre backs need to be able to dominate in the air, as was laid bare in Arsenal’s opener.

At just 5-foot-10, Ben White is extremely unlikely to get any taller. But what he can do is learn to be smarter with the way he uses his body to win headers. Otherwise, teams are going to target White in the knowledge they can play directly to strong, hold-up strikers.

Now, we know it’s not Tuchel’s style to play long. They averaged the second most passes per sequence last season and progressed the ball up the field at the fourth slowest rate.

But the addition of Romelu Lukaku – who’s hold up and interchange play is extremely underappreciated – adds a new fearsome dimension to their attack.

But there’s hope for Arsenal fans…

2. Kieran Tierney Will Be a Key Attacking Outlet – but Arsenal Must Support Him

One of the only positives from Arsenal’s opening-day defeat was the sight of a fully fit Kieran Tierney surging up and down the left-hand side. With this freedom on Friday night, Tierney was able to create six chances for his teammates. No Arsenal player created more chances than this in a single Premier League game last season.

As outlined in our Matchday 1 Tactical Snapshot, look how high Tierney’s average position was in the first hour.

With Granit Xhaka often covering him as the left-sided central midfielder, Tierney was given full reign to bomb on, and he whipped in a matchday-high 11 open-play crosses against the Bees. Only five of those crosses found teammates, however, and while that’s not the worst success rate in the world, the problem for Arsenal was that even if the ball did find a red shirt, that player was overwhelmingly outnumbered.

Using the Premier League Insight feed, we find that when Tierney crossed the ball he had, on average, just two and a half teammates to aim at in the box.  Brentford averaged six and a half players in their box on each of Tierney’s crosses giving them a four-player numerical advantage, with which they were to negate Tierney’s crossing threat.

That four-player advantage was the second-highest deficit among players to attempt three crosses or more in the opening fixtures.

Two examples from the second half highlight just how tough Tierney’s job was to find a teammate in the box.

In each occasion, Brentford’s defenders are not only in great positions but have the numerical edge over the Arsenal attackers.

If Arsenal are going to persist with Tierney crossing the ball – and there’s no real reason they shouldn’t – they need to get to bodies in the box to support him.

It’s no secret that Chelsea love to press under Thomas Tuchel. Since the German took over at Stamford Bridge in January of this year, Chelsea have averaged 9.9 PPDA, or passes per defensive action, the third lowest in the league during this time. PPDA is basically a proxy for pressing, where a low number refers to an aggressive pressing style and a higher figure a less aggressive press.

Against Crystal Palace, Chelsea registered 7.7 PPDA, the lowest figure of any side in the opening weekend. Not only did they press Palace aggressively, but they successfully pinched the ball off them 13 times. That figure was the highest number of high turnovers completed by any side on Matchday 1.

The key to Chelsea’s press was the bodies they sent to hunt down the ball. The Blues used an average of 2.6 players per pressure, with no side sending more during the opening fixtures.

Now, it’s only one game and that game was *only* against Palace, but Chelsea were able to suffocate their opposition using this tactic. It was a strategy Brentford used to good effect against Arsenal, and one which Chelsea will look to employ against the Gunners.

4. Chelsea to Double up on Pépé?

After a much-maligned start to life in the Premier League, Nicolas Pépé showed flashes of what he was capable of last season. With 16 goals and five assists in all competitions, he led Arsenal for total goal involvements. 11 of those goals came in 2021 alone as he ended the season in good form.

Brentford clearly identified the Ivorian as Arsenal’s biggest threat and were swift to double up on him to prevent him from cutting inside to shoot or create.

They did this immediately. This first clip is literally from the first 10 seconds of the game. The score bug isn’t even on the screen yet.

It was often Brentford’s left wing back Rico Henry who would close Pépé down, together with either their left-sided central midfielder Vitaly Janelt or left centre back, Ethan Pinnock joining to help.

Here’s an example towards the end of the first half. Arsenal find Pépé in space and he’s able to pick up the ball and run at Henry. But Pinnock is quick to offer support and despite the Arsenal winger showing a nice bit of skill to beat the centre back, Henry is able to make a challenge to dispossess him.

This happened constantly throughout the match. Another example here is on the hour mark with Henry and Janelt doubling up, forcing Pépé to come back inside to recycle possession.

The one time Pépé was able to isolate his opposite number it led to danger. Gabriel Martinelli pinches the ball in between the lines and runs centrally into the space… You can see Pépé pleading for the pass. He knows he’s finally got a one against one opportunity here and is desperate to exploit it.

He squares up Henry, drops his shoulder and cuts back on his left foot before firing in a shot.

It sails harmlessly wide, but it was the only occasion Pépé was able to isolate Henry and cause some damage.

Again, we can use the Insight Feed to add extra quantitative data. Only Albert Sambi Lokonga was pressured when he the ball more often (42 times) than Pépé (41 times) during this fixture, showing how much Brentford focused on the Arsenal winger to shut him down.

Expect whoever plays at left wing back for Chelsea – Alonso or Ben Chillwell – to get support from either the left-sided central midfielder or left centre back when Pépé is fed the ball.

Key to Chelsea’s dominant performance against Crystal Palace, particularly in the first half where they averaged 66% possession, were the advanced positions of their two wing backs, Marcos Alonso and Cesar Azpilicueta. Looking at the average position map shows us how high and wide both players stayed:

And they got on the ball a lot. Alonso had 60 touches in the opposition half and Azpilicueta – who only played 67 minutes – had 56.  To put that into perspective, of all full backs last weekend only Tierney (69) and Benjamin Mendy (60) could rival them.

What this enabled Chelsea to do was create two v. one situations against Palace’s back four.

Let’s look at just one example from the first half (honestly, this happened so many times, this entire article could be screenshots).

First, Andreas Christensen picks out Azpilicueta with a raking diagonal ball. The Spaniard’s starting position is extremely high and wide.

As Azpilicueta receives the ball, Palace left back Tyreek Mitchell is forced to shuffle across and face him down. As Palace were playing a back four, this leaves a large space in between Mitchell and his left centre back Marc Guehi. Mason Mount wastes no time at all taking advantage of this two v. one situation and runs into that space.

Mount is then literally all alone in the left half-space, where he has ages to look up and pick out a cross to Christian Pulisic. The American should do better and mis-controls the ball in a dangerous position.

Patrick Viera switched formation at half-time, changing to a back three in the second half, but the damage had been done. Plus, the formation change left a ton of space in front of the defence which Trevoh Chalobah strolled into before unleashing a howitzer to make it three.

Sometimes the opposition are just better than you and that’s the way it goes.