LeBron's 48 Special Remains One of His Crowning Achievements | The Analyst 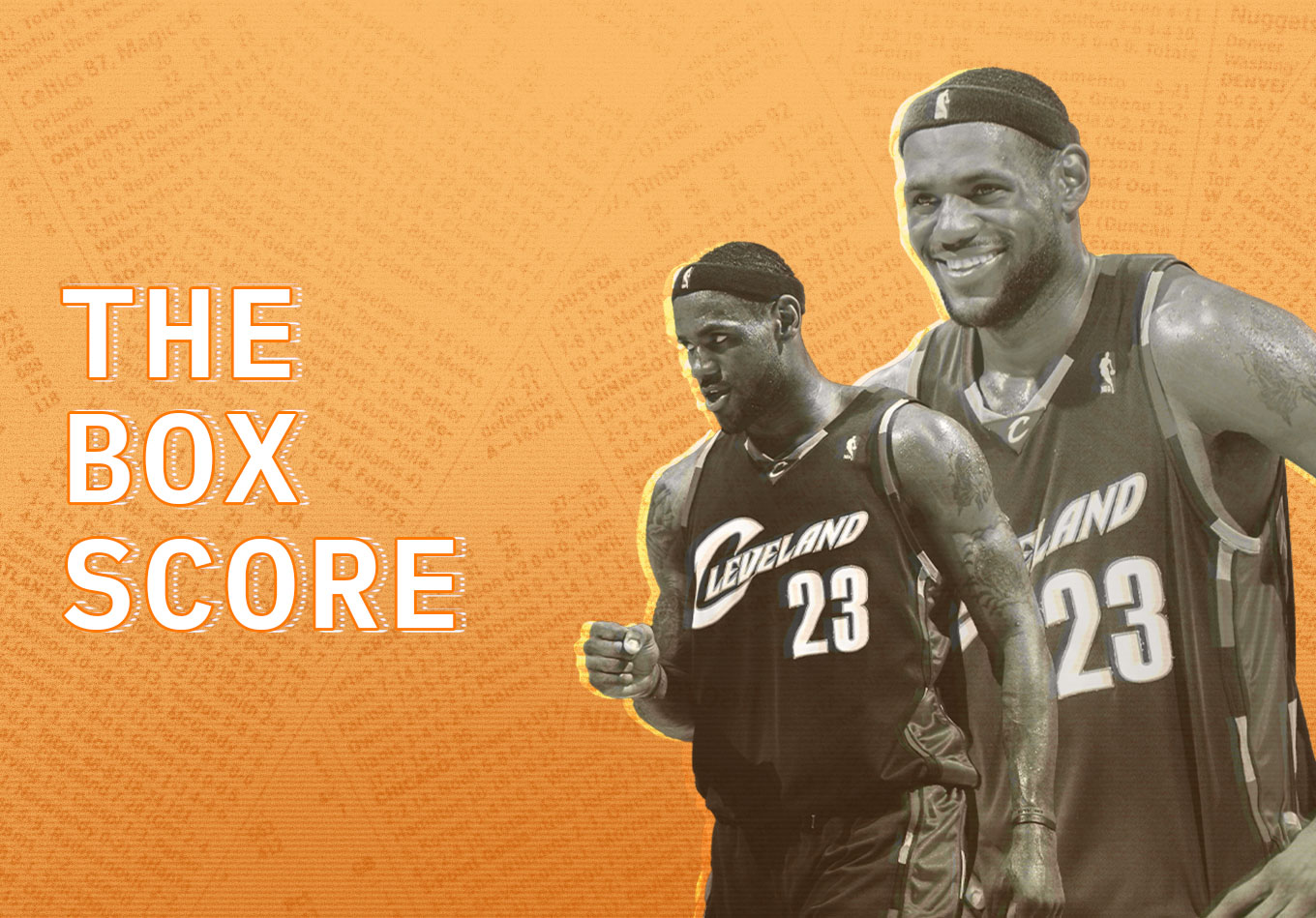 This summer’s release of Space Jam: A New Legacy gave us all another chance to talk about LeBron James following in Michael Jordan’s footsteps, but one of the first comparisons between two of the NBA’s all-time greats came in their inability to get past the Detroit Pistons.

It took Jordan until his fourth try in a playoff series to slay the beasts that were the Bad Boy Pistons, and in the spring of 2007, James seemed to be headed toward a second straight postseason exit at the hands of the latest iteration of a franchise that prided itself on out-toughing even the brightest of stars.

The 50-win Cleveland Cavaliers surprised the 64-win Pistons by pushing them to Game 7 a year earlier in the second round, but what seemed to be a narrowing gap (Detroit had just three more regular-season wins in 2006-07) appeared to be frustratingly slipping through Cleveland’s fingers after Games 1 and 2 at The Palace of Auburn Hills in the ‘07 Eastern finals. The Cavs had blown significant second-half cushions in a pair of 79-76 losses, going a combined 13 for 38 (34.2%) from the field in those fourth quarters.

James himself seemed to wear down, totaling seven points in those final periods, garnering some major criticism for passing up a potential game-tying or game-winning shot late in Game 1 to kick it to a wide-open Donyell Marshall in the corner. But he took over down the stretch to help will Cleveland to a pair of fourth-quarter comebacks in Games 3 and 4 as the series shifted to Quicken Loans Arena.

Back to The Palace, where the Pistons were 33-9 over their four mid-2000s playoff runs, Detroit figured it would be able to wrest control of the series back from the fourth-year phenom. Instead, it witnessed a king staking his first claim to the throne as the league’s most dominant player – a decade-and-a-half run that still hasn’t completely fizzled out.

“Get me to the fourth and if it’s close, I’ll try my best to win,” James said after Game 4.

Game 5 was predictably tight. The Pistons twice led by eight with James on the bench in the second quarter, then pushed it there again after a Tayshaun Prince 3 early in the third. That’s the largest lead either team would have.

James had 19 points through three quarters, then spent the first 3:18 of the fourth on the bench. He returned with his team up 75-74, a margin that was the same midway through the final quarter after Pistons baskets from Rip Hamilton and Chris Webber and a pair of Zydrunas Ilgauskas buckets for the Cavaliers.

If you told a Cleveland fan late on that Thursday evening that Ilgauskas’ layup at the 7:48 mark of the fourth would be the last field goal that anyone but James would score, they’d likely have nodded their head, rolled their eyes, turned off the TV and made no major effort to read the recap of a certainly devastating loss in the next morning’s edition of The Plain Dealer.

That would have been a mistake.

There were plenty of games between that night and the early years of James’ stint with Miami where even his immense talents were still in question. “He’s too passive when it counts.” “He can’t hit an outside shot consistently to save his life.”

Some semblance of those arguments hit the ESPN and talk radio airwaves consistently in a way that wouldn’t fully evaporate until he won those titles in South Beach. But it was May 31, that night at The Palace, when all the hype since high school, all the M.J. comparisons, and all the potential G.O.A.T. talk started to truly make sense.

After James’ 17-footer with 6:05 left put the Cavs up by three, the Pistons started to attack. Hamilton made six free throws and sank a 17-footer in the next 2:13 – Rasheed Wallace made two from the line as well – and Detroit took an 88-81 lead with 3:15 left after that 10-0 run. Win probability wasn’t the night-to-night thing it is in 2021, but it’s safe to say the Pistons would have been well above 90%.

James, of course, was just getting started. A driving layup, a dunk, and a 3-pointer combined with a Drew Gooden free throw – remember that free throw! – put Cleveland up 89-88 with 31.4 seconds left.

Chauncey Billups hit a 3-pointer to give the Pistons a 91-89 lead, then James drove past Prince for a dunk to tie it. Mr. Big Shot’s 3 at the buzzer rolled out, sending the game to overtime.

James ended regulation by scoring the Cavs’ final seven points and 11 of their last 12. He scored all nine of Cleveland’s points in the first overtime, and his 20-foot jumper with 33.7 seconds left seemed to be the dagger needed to take a 3-2 series lead.

But a pair of Wallace free throws, a rare James miss, and two Billups makes from the charity stripe sent this to a second OT.

James started the second overtime by making a 19-footer step-back jumper over Prince, and after a pair of Pistons baskets, he was at it again from the perimeter. With the shot clock winding down and Billups hounding him above the 3-point line, James dribbled behind his back and nailed a jumper from just inside the top of the circle.

“That’s too good right there! That’s good defense!” TNT color analyst Doug Collins shouted after Marv Albert’s “… And the game is tied!” call on the broadcast. “I’ve never seen him go behind the back on the dribble like that.”

James went 9 of 17 on midrange attempts in Game 5 – tying his playoff career high in midrange makes – after going 9 of 29 between the paint and the 3-point line in the series’ first four games.

After a Webber ‘and-1’ put Detroit up 107-104, James reached deep into his bag of tricks again. He evaded a trap from Billups and Jason Maxiell just past halfcourt thanks to a screen from Anderson Varejao, then darted past Billups to the left side, didn’t hesitate and nailed a 3 to tie it.

“This is unbelievable! This is Jordanesque,” said Steve Kerr, the third man in the TNT booth – a guy who knew a thing or two about M.J.’s playoff chops and would go on to coach against James in four Finals.

A Varejao missed layup sandwiched a pair of empty Pistons possessions from there, but Wallace’s block on Sideshow Bob’s attempt to put the Cavs ahead was notable for what led to it. This time, Detroit gave James a hard trap just inside the logo and forced him to give it up to Sasha Pavlovic, who fed Varejao in the post.

There was no such trap with 11.4 seconds left after Cleveland took a timeout and advanced the ball to half court.

“LeBron’s going to get the ball at the top of the circle and Detroit’s going to double team him,” Kerr said as TNT returned from a commercial break. “You’ve got to make anybody but LeBron James hit a shot here.”

Flip Saunders had different plans. He played it straight up, letting Billups check James as the other four Cavaliers spread out. James drove past Billups, slipped by Maxiell, who seemed to be setting up to take a charge, briefly lost control of the ball before cradling it with his right hand, and laid it off the glass with 2.2 seconds left. 109-107 Cleveland. The Palace had been silenced.

Billups got a decent look on a floater from the foul line as time expired but, like his shot at the end of regulation, it rolled out. The Cavaliers took a 3-2 series lead thanks to James scoring 29 of his team’s final 30, including the last 25 points and Cleveland’s final 11 field goals.

Those 25 straight are the most consecutive points scored by a player for his team in a playoff game since at least 2002-03, and the second most in any game – one behind LeBron’s old 2003 draft class friend and new teammate in Laker Land.

James finished with 48 points, nine rebounds and seven assists, becoming just the second player in a playoff game to reach those numbers since 1963-64. The other? M.J., of course, put up 48-9-8 in a Game 1 overtime win against the Charlotte Hornets in a 1995 first-round series after returning from his minor league baseball hiatus.

The Cavs didn’t let their 3-2 advantage slip away this time, closing the door on Detroit in Game 6 at home. It wasn’t James’ shots carrying Cleveland in that one, though. Rookie Daniel “Boobie” Gibson hit all five of his 3-point attempts, went 12 for 15 from the line and finished with 31 points in a 98-82 win that sealed the Cavaliers’ first trip to the Finals. Those were the most points Gibson ever scored in 447 career NBA games.

If it seemed like James was on an advanced timeline to winning his first title, the San Antonio Spurs made sure the wunderkind would have to wait another five years to lift the Larry O’Brien Trophy. James shot 35.6% from the field and 20.0% from 3-point range in the Finals, averaging just 22.0 points and finishing with 23 turnovers as San Antonio swept the Cavs.

Looking back, though, that loss was the beginning of the end for a Pistons team that was much greater than the sum of its individual parts – a true outlier in the NBA’s star-driven landscape. In all, Detroit made it to six consecutive Eastern Conference finals from 2003-08, stunning the Shaq/Kobe-led Los Angeles Lakers in the 2004 Finals and losing to the Spurs in seven the year after.

The Pistons won 59 games in 2008 and returned to the East finals, but ran into a Boston Celtics team whose toughest test on the way to its first title in 22 years was a seven-game duel with James and the Cavaliers in the second round.

After the Game 2 loss in Detroit in ‘07, James never lost to the Pistons in the playoffs again. Since ripping off those four straight wins, the Cavs swept Detroit in the first round in 2009 and again in the opening series of 2016 en route to the franchise’s only title.

For James, the 48 Special was, at that point, his highest-scoring playoff performance. It’s one of his 28 career 40-point games under the bright lights of the postseason, yet it only ranks 15th among Basketball Reference’s list of James’ top playoff game scores.

That says a lot more about James’ career-long transcendence than it does about Game 5 against Detroit. There are a handful of LeBron moments that would rival what he did against the Pistons in double OT, but not many.

“One of the great performances of all time in playoff history authored by LeBron James” is how Albert dubbed the game he’d just called moments after the final buzzer sounded that night at The Palace.

However you rank James’ pantheon performances, this is the one that made everyone take notice. He was already a superstar and the face of the league in many ways, but we hadn’t yet seen him take over a game deep into the playoffs that few thought he could win.

Once he showed the world what he could do that night in Detroit, it was hard to believe he could ever lose.