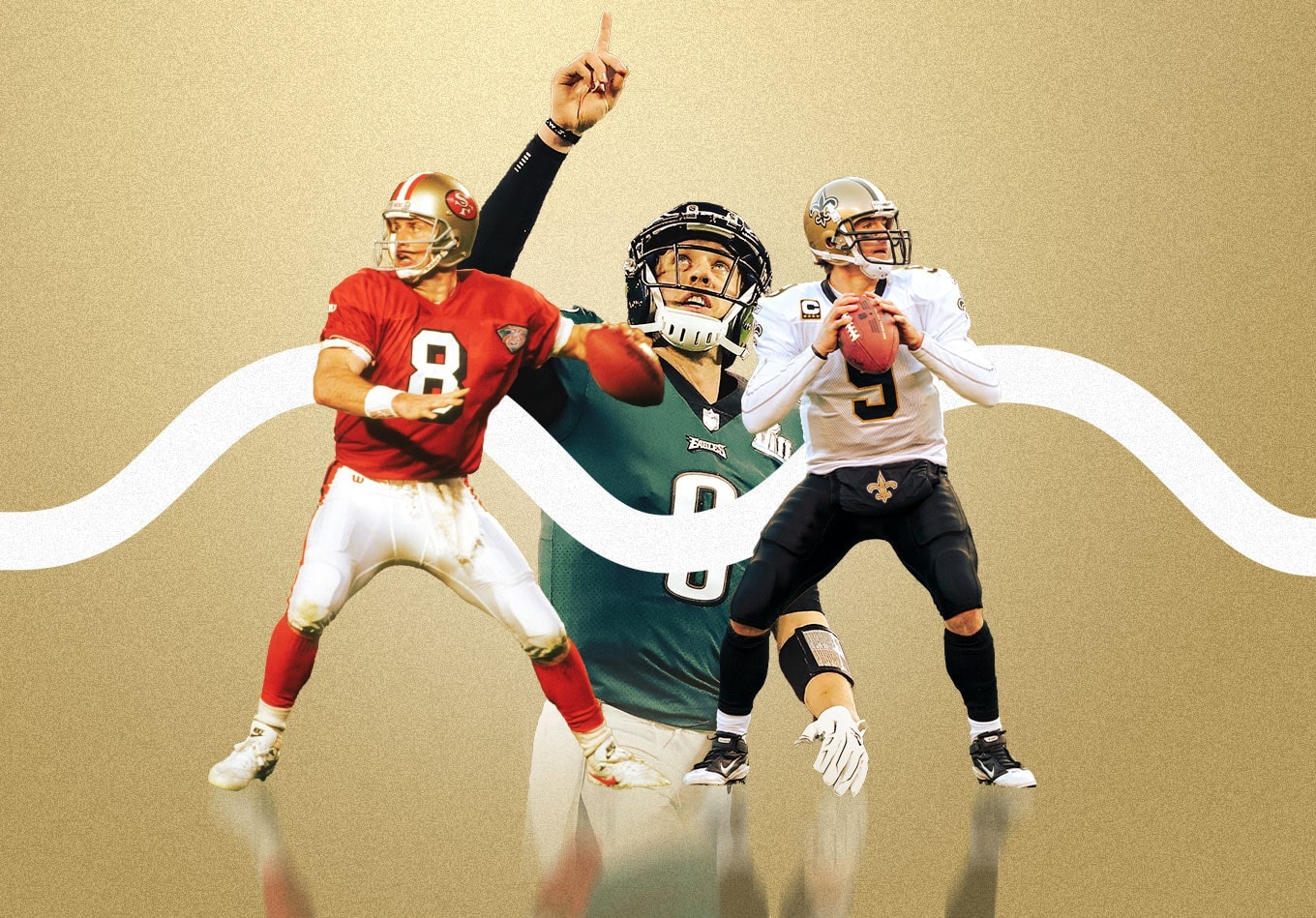 We’re truly living in the golden age of quarterbacks.

QBs are slinging the ball more than ever, with 10 of the 11 seasons that featured the most passing attempts per game taking place between 2011-20. And the average NFL game had a record high of 49.6 total points in 2020, breaking the previous record of 48.9 in 1961.

But has all this increased scoring resulted in record performances? Time to find out.

Touchdowns, turnovers and titanic scoring — this game had it all. Washington jumped out to a 13-0 lead after the first quarter and never looked back, adding 21 in the second, 14 in the third and 24 more in the fourth. Already holding a 69-41 lead in the closing seconds of the game, a 29-yard Charlie Gogolak field goal finally topped things off. Believe it or not, no team amassed more than 400 total yards. There were eight turnovers on the day and Washington returned two of the Giants’ six for touchdowns. Sonny Jurgensen completed 10-of-16 passes for 145 yards and three touchdowns for Washington, which scored four more TDs on the ground.

It was an offensive explosion at Paul Brown Stadium. This matchup resulted in nearly 1,000 total yards in this 100-plus point affair. Carson Palmer threw for 251 yards and four touchdowns (to go along with three picks) while running back Rudi Johnson led the way with 202 rushing yards and two scores. Kelly Holcomb’s 413 passing yards and five touchdowns were not enough for Cleveland, which blew a 48-44 lead in the fourth quarter.

A 48-48 game at the end of regulation is certainly something you don’t see every day. Kansas City took a 21-7 lead in the second quarter, but Seattle quickly stormed back and the two teams went back and forth for most of the second half. Bill Kenney threw for 311 yards with four touchdowns and no picks for the Chiefs. Dave Krieg had 280 passing yards to go along with three touchdowns for the Seahawks. In the end, Norm Johnson made a 42-yarder to tie it and another 42-yarder to win it in OT for Seattle.

Most Points by One Team:

The Bears lost to Washington 7-3 just a few weeks prior to the 1940 NFL Championship game, but it’s fair to say they flipped the script the second time around. Washington had nine turnovers and Chicago finished with 519 total yards. Just 119 of them were in the air (on 10 attempts) and Bill Osmanski rushed for a game-high 109 yards.

Most Points by One Team in the 21st Century:

Here’s some of the modern-day gunslinging we’ve come to know and love. Drew Brees completed 31-of-35 passes for 325 yards and five touchdowns without throwing an interception. Mark Ingram, Darren Sproles and Pierre Thomas each had more than 50 yards on the ground for the Saints, who racked up 557 total yards. Indy turned the ball over three times and New Orleans returned a Curtis Painter pick for a touchdown to cap off their 62-point performance. This is the only time a team has scored more than 60 points in the regular season during the 21st century.

Most Points by One Team in the 21st Century in the Playoffs:

This contest is just as notable for being one of the biggest blowouts in NFL history as it is for being Dan Marino’s final game. The Jaguars entered the game as the top seed in the AFC and it was pretty much over by the end of the first quarter (Jags led 24-0)). Fred Taylor had an NFL postseason record 90-yard touchdown run and it was 41-7 at halftime before the Jags padded the scoreboard with 21 more points in the second half. They finished the afternoon with 520 total yards to Miami’s meager 131. Marino completed just 11-of-25 passes for 95 yards with one touchdown and two picks. Jacksonville couldn’t build off its dominance in the AFC Championship game, losing to the Tennessee Titans for the third time that season.

Everything happened so quickly. Just over a minute into overtime, Cardinals linebacker Karlos Dansby stripped Aaron Rodgers and walked the ball into the end zone for six. It was a crazy ending to the highest-scoring playoff game in NFL history in which these NFC teams combined for over 1,000 yards. Rodgers threw for 423 yards and four touchdowns, while Kurt Warner threw for 379 and five. In the end, it was a defensive play that made all the difference, though Arizona would drop its next game to the eventual Super Bowl champion Saints.

Steve Young connected with Jerry Rice for a 44-yard touchdown on the opening drive of Super Bowl XXIX and it was just the beginning of the 49ers’ onslaught. Young followed that up with a 51-yard touchdown pass to Ricky Watters on the very next drive. He threw for 325 yards and six TDs in all with Rice finishing with 10 catches for 149 yards and three TDs. The Chargers put up 26 points of their own but the game was never particularly close as Young earned his only Super Bowl win while not backing up Joe Montana.

It’s hard to think that Tom Brady — the seven-time Super Bowl champion — could throw for 505 yards with three touchdowns and no picks in the big game and lose. That’s exactly what happened in Super Bowl LII. It was backup QB Nick Foles that led the way for Philly, throwing for 373 yards and three scores. New England took its first lead of the night late in the fourth quarter, but a Zach Ertz 11-yard touchdown and Jake Elliott field goal in the closing minutes led to a Philadelphia victory in this high-scoring affair.