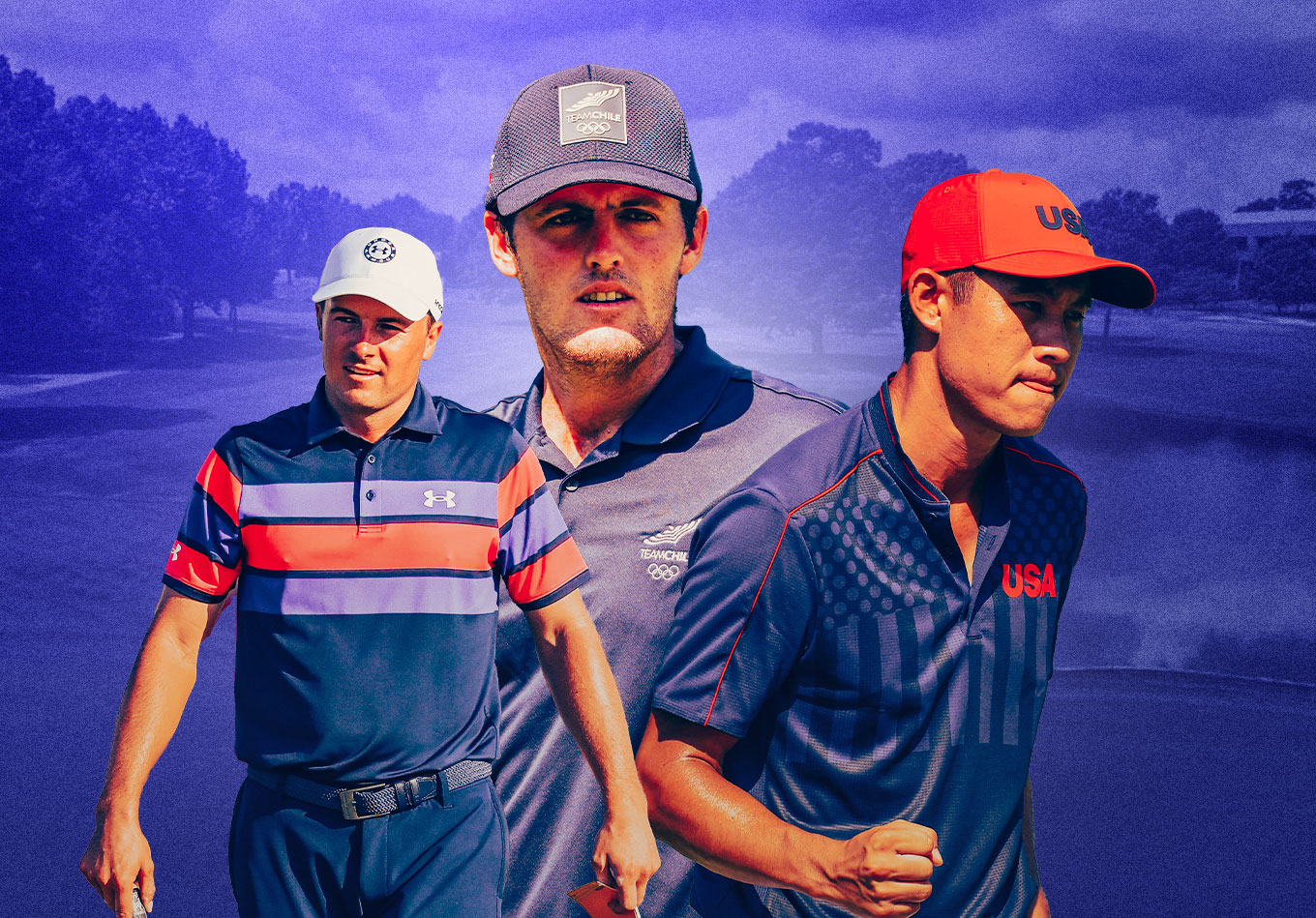 Are We Headed for a Morikawa-Spieth Duel at the St. Jude Invitational?

We’re using the advanced FRACAS model to project the winner, top value plays and best fantasy picks ahead of this weekend’s events at TPC Southwind, the Old Greenwood course and the Hero Open.

It’s a busy week in the men’s golf world with a WGC, an alternate PGA Tour event with Stableford scoring, and a Euro event in Scotland.

We’ll poke into all three, but, as usual, we’ll start our focus with the biggest tournament of the week. The WGC-FedEx St. Jude Invitational will be held at TPC Southwind for the third year in a row. Southwind is a Ron Prichard designed par 70 playing 7,233 yards.

It’s not a particularly difficult course, but there is water everywhere and big numbers lurk all over the course. The result is a lot of scoring balanced out with a lot of quick steps backward. The winner will likely come in around 15-under par and most golfers will end the weekend under par overall, but it’s also likely we’ll see a handful of players finish the tournament double digits over par.

Using our hole clustering model, the long/easy par 4s are going to be key this week. There are six of them on this course. With a total variance of about 2.5 strokes on those six, players who can nab some birdies and keep away from the big numbers are picking up a bunch of strokes on the field. Brooks Koepka has had a lot of success at TPC Southwind and his success on these types of holes is why. This week he’s projected to lead the field in long/easy par-5 scoring.

The field is predictably strong, with an average FRACAS of almost 1.5 strokes better than the PGA Tour average. Like all WGCs, there is no cut, which really flattens the win percentage curves. Overall, there are 18 golfers with greater than a 2% chance to win which is a real testament to how good this field is.

Morikawa finally looked like he was going to cool off after his first two rounds at the Olympics, but he caught fire over the weekend and nearly ended up on the medal stand. Overall, he’s actually behind Spieth in our FRACAS rankings for this course, but he’s also projected for slightly more variance in results which is why his win percentage is higher.

Like Morikawa, Spieth refuses to cool down. When last we saw him, he was facing down Morikawa and Oosthuizen at The Open, finishing two strokes behind Morikawa in second place. Both players actually get a FRACAS reduction for this course, as both are better when things play a little more difficult, but the form is so good for the pair that they’re our co-favorites. Spieth even offers a little value in the market, where our 13-1 number is a little more bullish on Spieth than the 15-1 we’re seeing in the consensus.

The pricing we’re seeing in the consensus market across both outrights and props is particularly fair. In fact, there is only one golfer in this field we’re finding any value on and that is Ian Poulter.

Known for his contagious personality and colorful slacks, Poulter sits right on the cusp of WGC qualification. For WGCs, the top 50 in the world automatically qualify, and it’s good that the field was finalized last week as Poulter now sits at 51st in the world per the Official World Golf Rankings.

FRACAS is considerably more bullish on his recent form, placing him at 14th in the world and 12th in this field after adjusting for the course. The course fits him fine, giving him a small jump in FRACAS, but the value we see really just comes from a difference in perceived current skill level. Looking at his rolling FRACAS chart, we can see how consistent he’s been over his last 2,000 holes, even with a huge drop-off at the start of 2021. His form recently reads T30, T3, T25, T40, T36, T4, and T26. Nothing too spectacular, but he’s been doing it in strong fields.

Where we see value for Poulter this week is not really in the outright market, but in the placement market. Our simulations give Poulter a 7-1 chance of finishing in the top five and a 7-2 chance to finish in the top 10. In the consensus market, we’re seeing those numbers at 10-1 and 11-2, respectively. Not only is there great value in those differences but, by steering clear of the outrights, we can avoid Poulter getting blitzed by one of the best players in the world, who are always live to win by half a dozen strokes.

With just one value play of the week, we’ll instead turn to the other action in the men’s golf world, which can be found below the DraftKings Value Plays.

While we’ve seen a few alternate scoring methods used on tour this year with match play and a couple of team events, only once per year does the PGA use Modified Stableford scoring.

Rather than stroke play, where scores are tabulated relative to par, Stableford awards points for how you performed on a hole. A par is worth zero points, a birdie is worth three points, an eagle five points, and an albatross eight points. On the flip side, a bogey is minus-1 and anything worse than a bogey is minus-3. This means that if you miss your fourth shot on a par 3 you can pick your ball up and walk to the next hole if you want, as you can score no worse than minus-3. At the end of the tournament, the player with the highest score wins.

The purpose of Stableford is to encourage more risk-reward. In stroke play, a birdie and a bogey are worth the same amount in opposite directions. In Stableford, a birdie is worth twice as much as a bogey costs so it encourages players to take risks for more points.

The tournament is hosted by Tahoe Mt. Club and is played on the Old Greenwood course. It’s a course at elevation, so in tracking shots you will consistently see drives approaching 400 yards. The whole tournament is set up for scoring and excitement, so the course plays relatively easy with a ton of variance. There are a number of drivable par 4s and two par 5s that should be reachable for the entire field.

A familiar name heads our win predictions for the Barracuda Championship. Mito Pereira continues to impress. Last week, he played in the playoff for the bronze medal, securing his third consecutive top-six finish in a PGA Tour level field.

Old Greenwood suits him well, as he’s shown an ability to score in bunches, and he’s on fire at the moment. At 8.35%, he leads the field in projected win percentage and should have a great opportunity to net his first PGA win. In the consensus market, he’s 18-1, but our simulations think that should be more like 12-1.

In fact, four of our top five in projected win percentage play most of their golf on the Challenge Tour. Marcel Siem will be a familiar name for those who followed The Open Championship last month. Siem became a fan darling through his penchant for fist pumps and expressiveness on the course. His form is excellent coming in, and FRACAS thinks he’s the likely winner.

Santiago Tarrio, Daniel Gavins, and Chase Hanna are also Challenge Tour regulars, though Gavins won his Euro card with a win last week. Tarrio has been in incredible form with two wins and four other top-five finishes in his last eight starts. He finished in a tie for 15th last week, making it through both rounds of cuts. Hanna has five top sevens in his last seven starts, including tying for sixth at the Cazoo Open two weeks ago, his second crack on the Euro tour this year. Gavins is someone we fancy again, and you can read about him in our assessment of last week just below. We see value in all three players compared to their consensus odds.

It was gold for the United States and a riveting seven-man playoff for the bronze medal. Though there was hesitancy from the golf world going into the Olympics, including less-than-excited quotes from Rory McIlroy and Justin Thomas, the way the competition played out in Tokyo changed a lot of minds. Xander Schauffele came out on top, fulfilling his father’s (and coach) dream of Olympic Gold.

Schauffele moved up two spots to 5th in the world per FRACAS, but the real movers were C.T. Pan and Rory Sabbatini. Neither were in particularly great form coming into the tournament, but both went really low on the weekend to jump into medal position. Representing Taiwan, Pan opened with a 74 before rattling off rounds of 66, 66, and 63. The result was moving up 87 spots to 111th in the world and a million-dollar payday from the Taiwanese government.

Sabbatini is South African by birth but is well known for becoming a Slovakian citizen with a specific focus on qualifying for the Olympics. Sabbatini was outside of the top 400 before the weekend, but a second-place finish spurred by a Sunday round of 61 saw him jump 207 spots to 210th in the world.

While the remainder of the golf world was largely on hold for the week, the European Tour did hold an event. An ugly Sunday for the leaders saw a surprising victory coming from behind for 30-year-old Daniel Gavins. Gavins was in fine form coming in, and FRACAS had him within the top 100 prior to last week, so his victory came only as a minor surprise to FRACAS. With the win, Gavins secured his European Tour card and shot up to 50th in the world. He’s a name to keep an eye on as a late-bloomer.