Can Kyle Lowry Help the Heat Re-Emerge as a Contender? | The Analyst 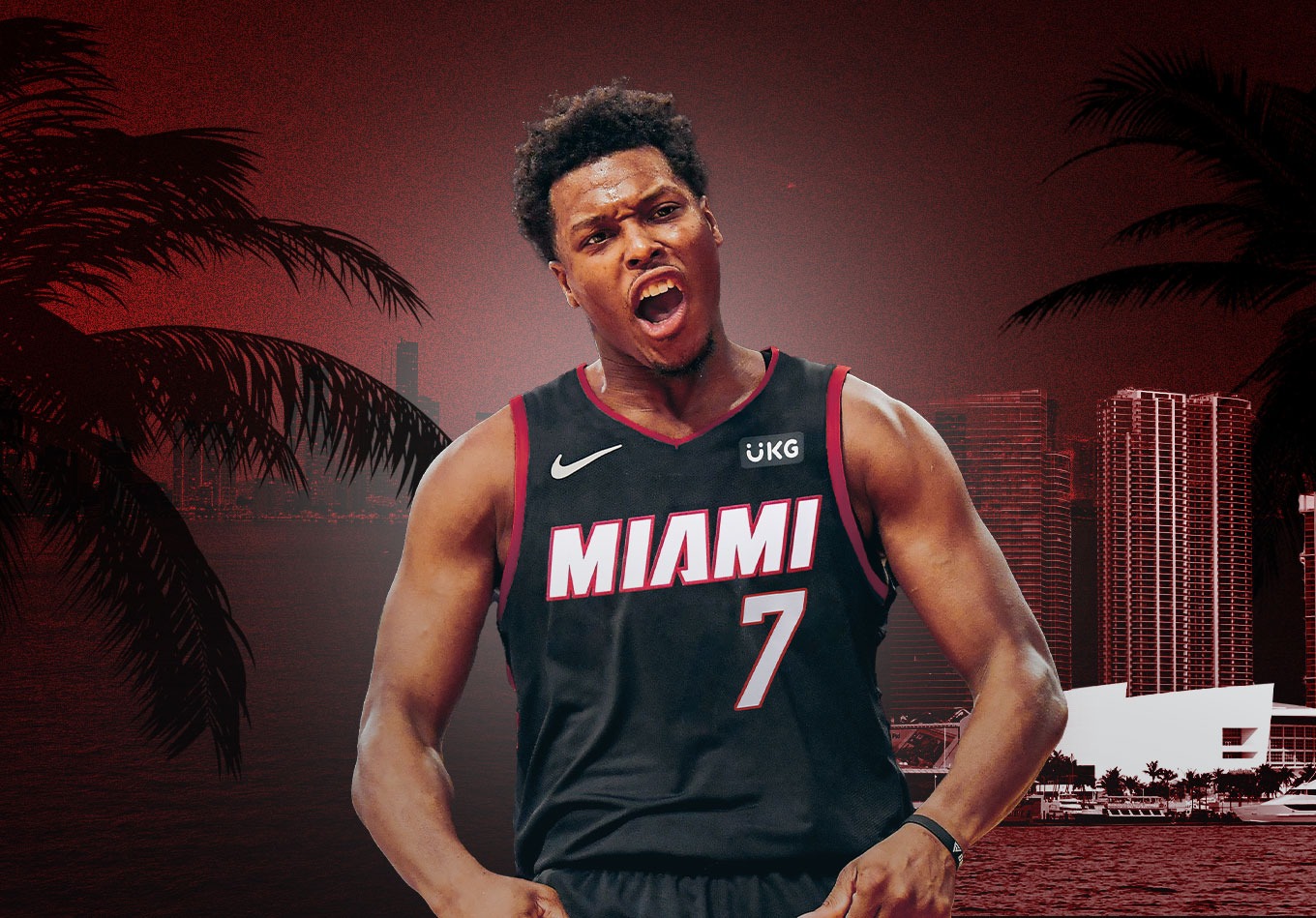 For months, dating back before last season’s NBA trade deadline, the Miami Heat have been fixated on Kyle Lowry.

They pursued him in March before the Toronto Raptors ultimately opted to keep him and then, as summer’s free agency approached, they were considered the front-runners to acquire him. Sure enough, just as the free agency window opened, the Heat and Raptors negotiated a sign-and-trade that sent the six-time All-Star southbound.

Although no longer the perennial All-NBA-caliber guard of yesteryear, Lowry remains a highly impactful player and gives the Heat a reliable, stabilizing force at point guard. He’s going to considerably bolster Miami’s 18th-ranked offense alongside its tenets of Jimmy Butler and Bam Adebayo.

Lowry certainly helps Miami, but its offensive ecosystem is also an improvement for him from Toronto’s last two seasons. Adebayo is the best big man between these contexts and pairs well offensively with Lowry, thanks to his play finishing, facilitating and dribble hand-off (DHO) acumen.

Similarly, Butler is the best player and creator between the teams. He’s capable of commandeering possessions and threatening defenders to let Lowry boogie off the ball at a volume unavailable with the Raptors because of personnel constraints.

The Heat now tout a pair of zippy off-ball gunners in Lowry and Duncan Robinson, which should broaden their offensive toolkit. Lowry is one of the league’s best off-ball guards, routinely creating space with screen-setting, shiftiness and impromptu movement. Schematically, tapping into his shooting can be fairly straightforward with Horns-based sets, handoffs and staggered picks.

His usage in Toronto provides a template for the Heat to borrow. While not the level of shooter of Robinson, it’s rather easy to imagine him forming a dynamic partnership in DHOs with Adebayo, who is a premier trigger man in those actions.

The quality of looks Miami could generate during sets in which Adebayo initiates while Butler and Robinson or Lowry screen for one of the latter seems quite encouraging. It doesn’t have to be that rigid, but involving those four in some capacity that features Lowry’s off-movement sniping – an aspect neither Goran Dragic nor Kendrick Nunn sustainably presented – will bear fruitful results.

There exist other, more calculated avenues to incorporate Lowry’s off-ball prowess. Spain pick-and-rolls with him setting a back-screen before flaring beyond the arc and Adebayo screening for Butler should be popular. Copy the Pascal Siakam-Lowry inverted pick-and-rolls by swapping Siakam for Butler. Lowry sets feisty screens and his off-movement chops will forge driving lanes for Butler’s slashing.

Iverson cuts, the horns Flare and weak-side flare or pin-in screens could be mainstays as well. It might be a good idea to utilize PJ Tucker as a screener for Lowry in some of these circumstances to potentially manipulate the defense’s lack of concern for Tucker into open looks for Lowry.

They could diagram screen-the-screener actions in which Lowry helps facilitate post touches for Butler or Adebayo before receiving a pindown. Lowry embeds drastically more dynamism into this offense around Butler and Adebayo than his predecessors. Given the tactical brilliance of head coach Erik Spoelstra, expect to see a ton of creative wrinkles that acknowledge these upgrades.

Connecting Lowry and Robinson in secondary actions during patented Butler-Adebayo side pick-and-rolls should be an emphasis. It can be as simple as leveraging Lowry’s elite screening into flares or pin-ins and using him as the pick man in Hammer actions for Tucker corner 3s.

One of (or both of) Lowry or Robinson could also just be stationary, applying their gravity into space for the team’s stars and lifting or relocating when necessary. Each is a preeminent off-ball player, both in shooting production and spatial awareness, which portends well for the effectiveness of Butler’s finishing and cutting, and Adebayo’s finishing.

These sorts of early offense actions will serve the starting unit kindly, too, ideally twisting the defense into a bind from a possession’s outset.

There’s an improvisational nature to Lowry that tailors him so well to an increased off-ball role in Miami. He constantly scans the floor to seek out pockets of space and wrestle away any advantage possible. This jitterbug approach means he’s masterful at gaining a slight edge on defenders and compounding its value with prompt, shrewd decision-making.

Whether it’s structured settings like handoffs or genuine randomness, Lowry will burn opponents with his nomad aura.

Plenty of on-ball reps will be allocated for Lowry as well. The objective will probably be to try and have him buoy non-Butler minutes (or games) by leaning on his ball-screen prowess, pull-up shooting and distributing. An assortment of Lowry-Adebayo-led lineups could factor prominently into these plans.

Over the past few seasons, Lowry’s been one of the most prolific pull-up 3-point shooters in the NBA. Since 2017-18, he’s netted 35.9% of his 853 off-the-bounce long balls. He’ll bury drop coverage when spearheaded by insufficient point-of-attack defense; afford him a modicum of room off a ball screen and he’ll tee up a jumper. Letting him rock against second units is the best manner to deploy this weapon because reserves are typically lesser defenders and prone to conservative coverage like drop.

His proclivity for pull-up 3s might be most evident in transition. Lowry loves to push the tempo and hunt them before the defense is settled. He’s constantly weaving through traffic to produce opportunities for himself and others. A quicker cadence does not necessarily signify a more efficient offense, but for a Heat squad that ranked 29th in pace last season and struggled in the half-court, his open floor comfort is a boon.

Envision Lowry’s relentless knifing leading to 3s for Robinson and Tyler Herro or trailing dunks for Butler and Adebayo.

As a passer, Lowry amplifies many of the team’s cornerstones. He’s a brilliant play-linker, sharply processing and executing timely reads when the ball swings his way. Pick-and-rolls with Adebayo, a high-level play-finishing center – something Toronto’s predominantly lacked in recent years – is a suitable complement to Lowry’s probing. He’s excellent at maintaining a live dribble to wiggle through creases inside the arc.

Now, that skill is priming Adebayo on the roll instead of Aron Baynes or Marc Gasol, which is a meaningful change. Not only will his probing convenience Adebayo, but heady cutters like Robinson and Butler can slice through the defense while Lowry occupies them.

Those aforementioned Horns sets don’t solely need to cater to his scoring either. He’s a capable facilitator from the elbows. Screen-the-screener actions in which Robinson sets a cross/flex screen for Butler or Adebayo down low before receiving a pindown while Lowry surveys his options is another available facet for this team to synergize its four best players.

Lowry also whirls precise feeds to rollers and brandishes significant pull-up gravity. He often draws two defenders off screens, with the opposition cognizant of his off-the-bounce juice. That’s an element none of Miami’s guards consistently yielded last season. He’ll carve out more space for Adebayo on the roll, whether it’s diving all the way to the rim or feeling comfortable to loft in those floaters he enjoys.

The Heat can even get funky, as they have at times, and use Butler as the roller. He’ll set punishing screens, force the defense to make a decision on Lowry’s imposing jumper and have room to saunter into the paint on the roll. Everything becomes easier and invites more versatility when Lowry is initiating pick-and-rolls rather than Dragic or Nunn. Just as his off-ball scoring thickens the playbook, his passing does, too.

Just because Lowry is a promotion at point guard over Dragic or Nunn does not preclude him from having limitations as a creator. The percentage of his shot attempts within four feet of the basket was the third lowest of his career at 23.0% last season. The wonkiness of playing an entire year in Tampa Bay, Florida, instead of Toronto deserves mention here, but that number was at 26.9, 21.5 and 22.0 the three years prior.

He’s just not much of a downhill scorer in the half-court, hence his affinity for transition. Mobile, long-limbed defenders who fluster his pull-up can contain him. These inhibitors will hamstring Miami at times and its ability – or lack thereof – to compensate could determine its ultimate ceiling with this core.

The Milwaukee Bucks and Brooklyn Nets look to sit atop the Eastern Conference this upcoming season, but the Heat’s acquisition of Lowry is the conference’s biggest needle-moving signing. At face value, Lowry notably improves their offense via his passing, malleable shooting and off-ball game.

Specifically, he augments their current principles of movement, screening and precise decision-making by supplying it in heightened ways that Miami’s previous starting guards could not.

The 2020-21 season was a setback for the Heat following a run to the NBA Finals. Lowry’s arrival does not render them the East favorites, but it eradicates various issues plaguing their stagnant offense and represents a defensive boost as well.

Miami should be superb next season. What exactly that looks like is unclear. Yet however it manifests, Lowry, as he typically does, will reside somewhere near the nucleus of everything.