Which Rookie Sleepers Brought the Funk at the NBA Summer League? | The Analyst 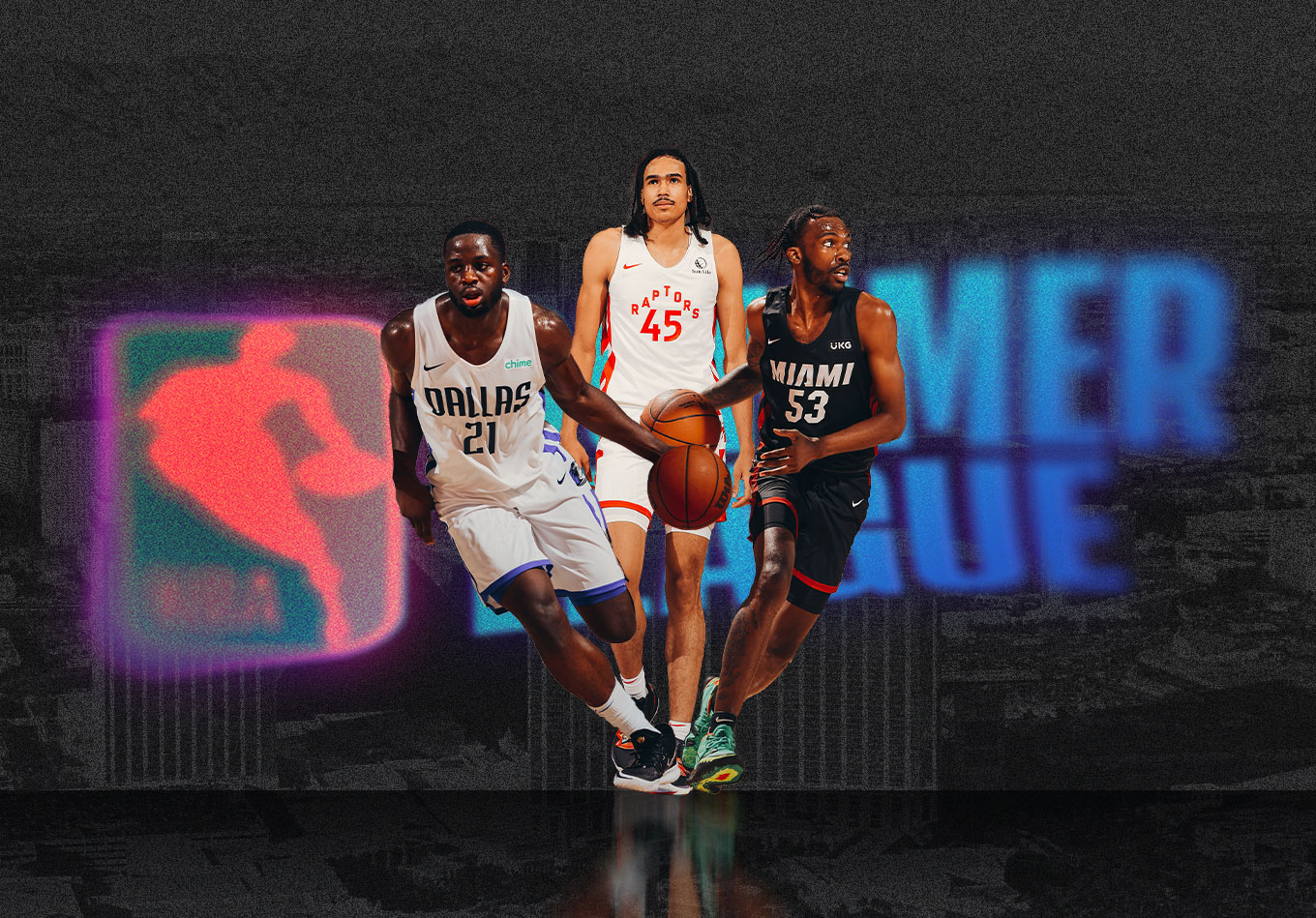 Las Vegas in August – the epicenter of scorching temperatures and sloppy, chaotic basketball.

NBA Summer League made a mask-laden return after a two-year COVID hiatus and certainly didn’t disappoint. While standout Summer League performances certainly don’t always lead to future NBA success, scouting players in the loose, free-flowing context of a recently thrown together team can be valuable in gleaning more information on young pros who are put in different situations than they were asked on their pre-draft team.

This past weekend, I named my All-Summer League Rookie Teams:

While the first- and second-team selections were unsurprisingly comprised entirely of first-round draft picks, three third-team selections (Deuce McBride, Quentin Grimes, Luka Garza) were picked in the second round and looked likely to carve out early rotation roles as rookies this coming season.

A handful of other rookie sleepers brought the funk and made significant statements in Vegas. Let’s dive in.

Banton’s draft stock was built upon the well-roundedness of his game beyond scoring. He led Nebraska in assists, rebounds and blocks this past season and (despite a last-minute invitation) led the G League Elite Camp in both rebounds and assists.

While he wasn’t featured in many mock drafts and his consensus draft ranking landed in the mid-70s, we mocked him in the 2nd round and the Raptors took a flier on Banton’s unorthodox skill set paying long-term dividends by drafting him 46th overall.

NBA Summer League certainly wasn’t smooth sailing for Banton as a scorer. He was 0 for 12 from 3, shot less than 50% from the stripe, and converted only two jumpers over the course of five games in Vegas. While his shooting/scoring efficiency shortfalls were quite clear and in alignment with his pre-draft scouting report, Banton continued to really pop and add material value in other areas of the game.

The 6-foot-9 Banton has exceptional height for an on-ball initiator and is able to see passing angles that traditional facilitators simply cannot. He put this passing vision and feel for manipulating defenses on full display throughout his time in Vegas.

Banton was also an agent of defensive chaos, making functional use of his length to disrupt ball handlers, dig into the nail, effectively contest (and block) jump shots, and generally make life difficult for the opposition both as an on-ball and off-ball defender.

Not only did this pop on film, but the numbers back it up.

While Banton certainly still has a way to go as a shooter and scoring threat, he brings a fairly unique, highly valuable skill set to the table that was ultimately rewarded with a roster spot and guaranteed contract with Toronto.

“Eugene from Eugene” was an absolute force attacking and finishing at the rim throughout the NBA Summer League. He was one of only three players to shoot better than 80% from 2-point range on at least 15 attempts, the other two being freakishly athletic big men in Jericho Sims and Udoka Azubuike.

Omoruyi measures in at only 6-foot-5 barefoot but he boasts a sturdy 237-pound frame and a rangy 7-foot-1 wingspan. He’s able to leverage his strength to bump defenders off their spots and create finishing space.

While these post-fades are fun, they’re more so a nice-to-have than a staple in Omoruyi’s arsenal. Where he truly thrived was in being timely and opportunistic with cuts, displacing the opposition on the offensive glass, getting out in transition, slipping off-ball screens, etc.

He proved capable of producing offensively in an off-ball role, which is crucial to carving out an eventual role in the Mavericks’ heliocentric Luka-conducted offense.

Omoruyi’s Summer League performance is an encouraging indicator that he has the potential to earn some quality NBA minutes on his two-way deal.

A duo that truly brings the funk.

Jarreau’s proposition coming out of school is quite similar to that of Trent Forrest as a big guard who adds value in a multitude of non-scoring capacities. Forrest landed a two-way contract with the Utah Jazz after going undrafted in the 2020 NBA Draft and recently inked a second two-way contract for the upcoming season.

Jarreau suited up with the Miami Heat in Vegas and joined his counterpart Forrest as the only two players at the 2021 NBA Summer League to accumulate at least 25 rebounds and 25 assists.

Jarreau really clicked with fellow Summer League standout, Omer Yurtseven, diming him up for easy look after easy look at the rim. He showed great feel in operating pick-and-rolls, getting into the teeth of the defense, reading where help comes from, and making quick decisions.

Jarreau’s defense was also as advertised, consistently pestering handlers on the perimeter and catalyzing transition opportunities for his teammates.

Jarreau followed in Forrest’s footsteps by earning a two-way contract, though not with his Summer League squad, but with the Indiana Pacers. His connection and synergy with Yurtseven could translate cleanly when running a two-man game with Domantas Sabonis down the line.

After coming up just short of an NCAA title and missing the G League Elite Camp with an untimely injury, Jarreau rallied, bet on himself, and played his way into an NBA opportunity.

“Mamu” was touted as one of the most skilled big men in the 2021 NBA Draft and was able to put his offensive talent on display in Vegas.

While he had poor shooting luck from deep, Mamukelashvili’s shooting touch was evident in sinking 15 for 18 from the stripe. While he got his points, scoring wasn’t the main attraction in Mamukelashvili’s Summer League performance.

On film, the playmaking is what truly pops. His handle, instincts, vision and passing arsenal are all rare for a 6-foot-10 big man.

Mamukelashvili donned No. 54 throughout NBA Summer League, representing the spot he was selected in the 2021 NBA Draft. It’s looking quite unlikely that there will be 53 rookies with better careers.

Despite an efficient, productive junior season at Ohio State, Washington generally flew under the mainstream prospect radar until his standout performance at the G League Elite Camp where he was one of only four participants to earn a full NBA Combine invitation.

Washington parlayed that strong pre-draft showing into a two-way contract with the Indiana Pacers and showed no signs of slowing down at NBA Summer League. Only four players (two rookies) eclipsed a 65.0 true-shooting percentage on at least 30 total true shooting attempts and better than a 20.0 usage percentage throughout Summer League:

Pritchard and Bane were both first round selections in the 2020 NBA Draft and went onto carve out significant roles as rookies. Bane earned second-team All-Rookie Honors.

Washington showed to be quite comfortable as an off-the-dribble shooter both from deep and from the midrange. He’s confident in getting to his spots and has deft footwork in squaring up his lower body regardless of the direction of his movement.

Washington was also a knock-down catch-and-shoot threat when functioning off the ball. Not only does he have a quick trigger as a spot-up shooter, but he has a good sense of relocation along the 3-point line.

Like his draft stock, Washington’s Summer League showing flew a bit under the radar, but the Pacers very well may have found themselves an eventual rotation-caliber microwave scoring guard.