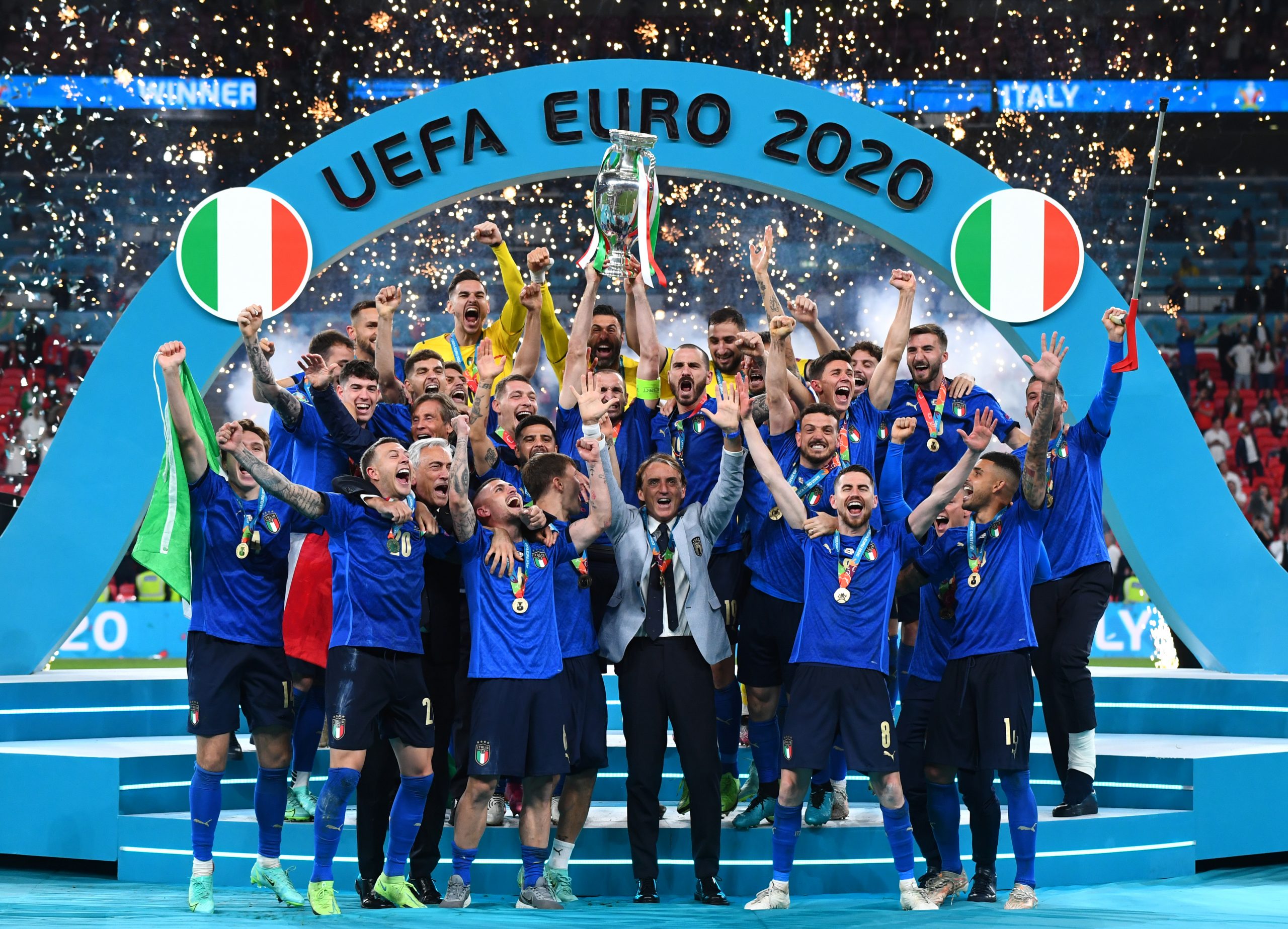 As the dust settles on the 16th edition of the European Championship, The Analyst presents some of the main themes from this year’s tournament.

Regardless of your team persuasion, Euro 2020 was objectively fun. Many thought that a gruelling domestic season combined with matches being played all over Europe would lead to dire, turgid matches with sides almost too tired to commit to any form of high energy, exciting play. But Euro 2020 said ‘think again’.

The 2.78 goals per game ratio is the highest of any European Championship since 1980, and we were blessed with some truly spectacular matches. June 28 will go down in history as one of the all-time great knockout days, with Spain defeating Croatia 5-3 in extra-time, before Switzerland knocked out favourites France on penalties after a pulsating 3-3 draw.

The refereeing also felt good. There was clearly a directive from UEFA for referees to encourage the game to flow, being more lenient on ‘smaller’ fouls, as well as a fairly no nonsense attitude to simulation. This has led to Euro 2020 producing the fewest fouls per game of any tournament since 1980, and fewer stoppages in play have enabled games to flow freely.

The Youngsters Who Came of Age

Euro 2020 saw the emergence (in some cases) and confirmation (in plenty of others) of some of the world’s most talented youngsters. None more so than Pedri. Plucked from second-tier club Las Palmas, the midfielder became an integral part of Barcelona’s midfield in 2020-21 and made his Spain debut in March this year in a World Cup qualifying match against Greece.

The fact he made his international debut just three months before Euro 2020, had only played four matches prior to the tournament and yet is now seemingly an indispensable member of the squad tells you everything you need to know about his talents. Pedri played 629 out of a possible 630 minutes for Spain. For an 18-year-old in a major tournament, Luis Enrique has put some serious trust in him.

Pedri showed composure on the ball that belied his 18 years of age. Against Italy in the semi-final he completed every single one of his passes in regulation time.

His importance to Spain doesn’t always show up in traditional metrics like assists, or even in chances created because he doesn’t always play the final pass. But his involvement in Spain’s attacking build-up to shots is second to none. Only the Italian duo of Lorenzo Insigne and Jorginho – who both played an extra game – were involved in more shot-ending sequences than the Spaniard’s 37, who won the Young Player of the Tournament award.

History was broken elsewhere too. Against Spain, Poland’s Kacper Kozlowski (17 years and 246 days) became the youngest ever player to make an appearance at the European Championship while Jude Bellingham came on against Croatia to become the youngest ever English player to play in any major tournament. If you ever feel down about England’s ultimate disappointment in the competition, just remember that when the 2030 World Cup kicks off, Bellingham will be 26.

21-year-old Mikkel Damsgaard also impressed for Denmark. His free-kick against England in the semi-final was the only direct free-kick scored in the entire tournament.

Not only is Cristiano Ronaldo the only player in history to play in five different European Championship tournaments, he’s scored in every single one of them since 2004. Euro 2020 was no different, with the Portuguese picking up the Golden Boot despite exiting the tournament in the Last 16. Ronaldo netted five times – the same tally as Patrik Schick – but with an assist to his name, it was enough to beat the Czech forward to the award.

The five goals he scored in this tournament were the most he’s netted in a single European Championships and it brought his total competition tally to 14 goals – five clear of next best Michel Platini (nine).

His 14 goals in the European Championships have come from 137 shots overall – 95 shots more than any other player since his first tournament in 2004.

Ronaldo will be 39 when Euro 2024 starts. Only one outfield player has ever played in a European Championships aged 39 or older and that was Lothar Matthäus in 2000. If Ronaldo does make the next finals in three years’ time, then he would break yet another record and, somehow, you would not put it past him.

England just fell short in their quest to win their first major men’s title in 55 years, and it came in the most English fashion of all – penalty shootout disappointment. Despite this, Gareth Southgate and his side can hold their heads high at their best tournament appearance since that 1966 World Cup victory and an improvement on their 2018 World Cup semi-final exit.

With an average starting XI age of 26 years and 54 days at Euro 2020, England were the youngest at the tournament. In the 0-0 draw with Scotland in the group stage, their starting selection was the youngest-ever by an English men’s team at a major international tournament (25y 31d).

Their journey to the final was predominantly built on a solid defence. England became the first team to keep a clean sheet in each of their first five games at a single edition of the European Championship, while their seven straight clean sheets in all competitions broke new ground for the Three Lions. Goalkeeper Jordan Pickford set a new record for an England goalkeeper for most minutes without conceding, overtaking the legendary Gordon Banks’ 720 minutes set between May/July 1966 (725 mins in total).

Across the whole tournament, no side restricted their opposition more than England did (0.70 xG faced per 90) but their emphasis on defence > attack came unstuck in the final against the second-best defensive team in Italy (0.75 xG faced per 90). Star striker Harry Kane failed to touch the ball in the opposition box over the 120 minutes and England posted their lowest xG total (0.57) in a competitive game since their 2018 World Cup defeat to Croatia (0.55) exactly three years earlier. There’s something about July 11th, it seems.

Remember when Gareth Bale blasted the ball into orbit against Turkey? Or when Gerard Moreno and Alvaro Morata conspired to increase Spain’s penalty curse to five missed spot kicks in a row? They were not alone. Just nine of the 17 penalties (53%) were scored at Euro 2020, making it the second-worst for conversion rate in the history of the competition.

A Glut of Own Goals

If own goals were categorised as a player, they’d just have scored the most goals in a single tournament of any player (11 – beating the next highest figure of Michel Platini’s nine in 1984).

For some unknown reason – and you can theorise all you want – there have been loads of own goals this tournament. There were more own goals scored in Euro 2020 alone than there had been in the entire history of the competition.

Unsurprisingly that means we’ve seen a bunch of wacky own goal records fall:

Own Goals by Tournament:

The Wonderful Weirdness of Game State

England saw hopes of Euro 2020 glory crushed with their penalty shootout defeat in the final versus Italy but can find an ounce of comfort in the fact that they only trailed for a tournament-low 1% of match time. Okay, there is zero comfort in that but at least we tried.

Southgate’s side only fell behind once during the entire tournament – for eight minutes and 53 seconds in the semi-final against Denmark.

The Netherlands’ led for the highest proportion of game time at Euro 2020, but it didn’t do them any good in the Last 16 when they came unstuck against Czech Republic. There were four teams who didn’t lead at any point in the tournament: North Macedonia, Poland, Scotland and Turkey.

Spare a thought for Hungary. In the toughest group against giants Germany, France and Portugal, they trailed for only 3% of ball in play time at the finals – the second-best ratio. They were just six minutes from knockout qualification before Leon Goretzka’ goal for Germany levelled the scores at 2-2 in Munich on the final day of Group F action, but as brave as their performances were, they couldn’t seal a shock Last 16 spot.

Since the nadir of 2017, Italy’s redemption under Roberto Mancini has been quick and decisive. The Azzurri’s unbeaten streak now stands at 34 matches after beating England in the final to win their second European Championship title, and first in 53 years. And after the performances they displayed, it was hard to argue with the outcome.

In fact, so dominant have Italy been in their unbeaten run that when Luke Shaw scored to put England ahead in the final, they found themselves trailing in a game for the first time at Euro 2020, while overall they spent 65 minutes behind against England in the final, 21 more minutes than they had been behind in their 33-game unbeaten run (in all competitions) coming into the final (44).

This was the hot summer of Chiellini and Bonucci, the old guard who had their last hurrah: Bonucci now the oldest player ever to score in a European Championship final, Chiellini the oldest outfield player to captain his side in a major final. The pair were at the heart of Italy’s defence and at the heart of what it means to be Italian. Italy haven’t lost a game when the two ‘brothers’ have started together since that Sweden match in 2017.

It was the summer of Marco Verratti who, despite missing the first match of the tournament, created a total of 14 chances, more than any other player. In the final, the PSG midfielder’s controlling influence on the game was apparent and laid bare one of England’s biggest deficiencies. He made 133 touches, which – at the time of his substitution in extra-time – was a record in a Euro final.

We also saw the emergence of Leonardo Spinazzola, who was a revelation at a wing-back and surely in line for player of the tournament before his serious Achilles injury.

With contributions from Stats Perform’s Data Insights team, who collected facts throughout the tournament.