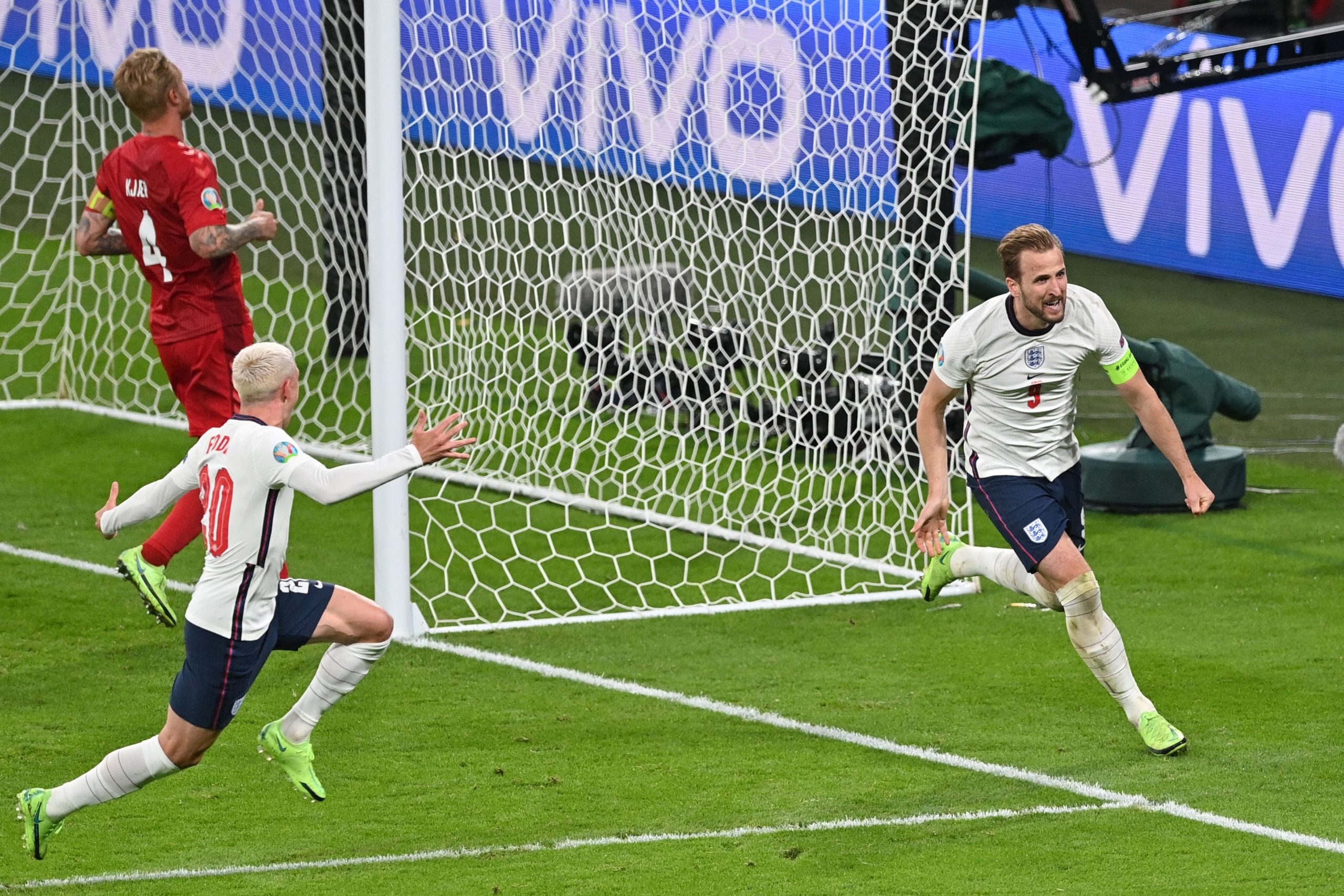 The 55-year wait was always going to go on – it was just a matter of whether it would continue to 2022 or Sunday at 8 o’clock. It was the latter as England broke their semi-final duck and advanced to their first European Championships final and first major tournament final in 19 tries since the 1966 World Cup.

Regardless of tonight’s winner, an opportunity for a second major tournament win was always going to be 90 minutes away. It was just a matter of which team would get the chance, and for Denmark the chance slipped away after an early lead ended England’s run of not conceding at all in the tournament.

The second English goal came in dramatic fashion, and the irony of it was it came from a missed penalty after that white spot had haunted England for years. A rebound resulted in Harry Kane’s 10th goal at a major tournament, equalling Gary Lineker’s England record. It was also Kane’s 15th goal against Kasper Schmeichel after the Danish goalkeeper made the initial save from an unremarkable spot kick.

The stories entering the match were myriad, but an intriguing one was that Denmark had been one of the stronger attacking sides at the tournament with England the most effective defensively. And moments after the world told us Jordan Pickford had set England’s goalkeeping record for consecutive minutes without conceding, Mikkel Damsgaard’s 30th-minute strike broke that run and Euro 2020’s run without a free-kick goal.

It took all tournament to that point for England to trail, and what they did was something about it. They did it by generating perhaps their most dominant attacking performance at Euro 2020 – their 2.82 xG and 10 shots on target are their best marks at the tournament, and their 20 total shots doubled their output against Ukraine.

For Raheem Sterling, there was all sorts of space in the opening 15 minutes, and that returned toward the end of the first half. In the 38th minute, Sterling had the clearest chance of the match to that point but Schmeichel was there, albeit quite a bit smaller than the comparatively available goal. Then 39th-minute redemption – kind of. Sterling was there to finish Bukayo Saka’s ball into the middle but it went off Denmark centre back Simon Kjaer for the tournament’s record 11th own goal. All other Euros amassed nine total.

From there it always seemed England’s match to win, and often on set pieces, which Harry Maguire pursued with aggression to the point of being cautioned. In the 54th, Maguire’s header off a set piece was narrowly denied by Schmeichel’s superb fingertip save.

Speaking of the Dane whose dad won this tournament: Kasper Schmeichel won three times at Wembley this season, including an FA Cup final, and he was perhaps the Danish player who most deserved to advance. Of England’s 10 shots on target, he saved all he had any chance at and prevented two goals, excluding – yes – penalties and own goals. A caveat if there ever was one:

While England worked the ball into dangerous positions, Denmark’s chances came only from range. Their five touches in England’s box at 90 minutes were far and away their fewest in the tournament after averaging 32.4 per match in their first five. They managed just two shots after Damsgaard’s free kick.

That hardly discredits the reputation Denmark have built during an unexpected and near-tragic run to this point, but the reality is what worked for them until this point didn’t Wednesday at Wembley. Gareth Southgate’s selection of Saka – a slightly more defensive pick than Jadon Sancho – worked in the sense that it led to the equaliser, but also in that he and (fellow uncertain selection) Kyle Walker shut down Denmark’s left flank.

Joakim Maehle had zero touches in the opposition box, one pass into the final third and 109.1 metres carried – all tournament lows.

After 120 minutes, it adds to England’s first win in a Euros knockout game after trailing. It’s also the first time they’ve done so in a major tournament since a 3-2 win over Cameroon in the 1990 World Cup quarter-finals.

And so a second major tournament win is 90 minutes away – for England, that is.