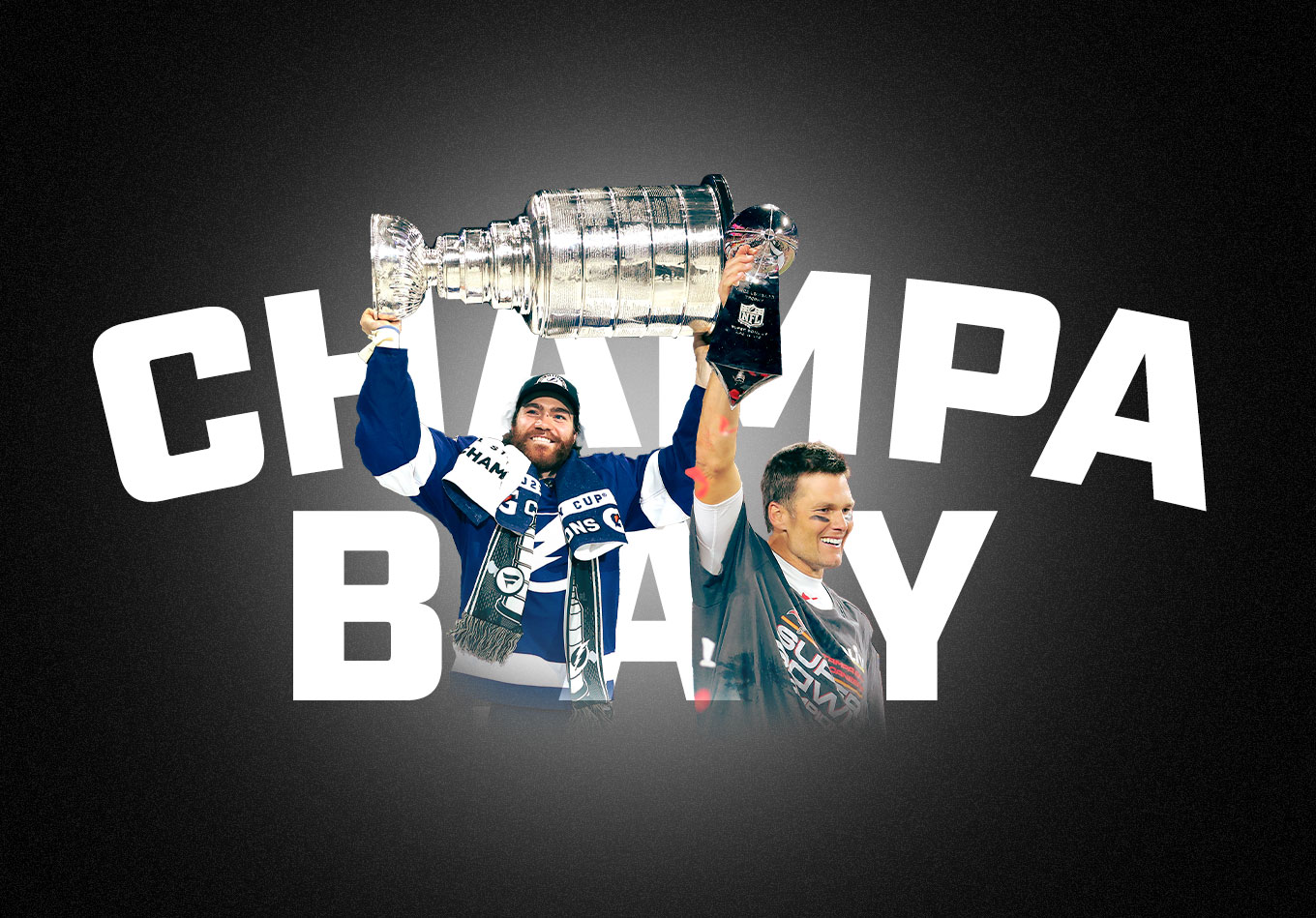 The three major sports teams in the Tampa area have shined this past year. But where does this stretch rank among the best professional sports years for a metro area? We break down the historical data to find out.

Tom Brady moved south, and he took the “Titletown” moniker with him.

While the Red Sox have rebounded this year and the Bruins had another quality season, Boston was not in contention for the most successful sports town like the city had been during several years Brady was with the Patriots.

But Brady’s move to Tampa Bay coincided with a powerhouse Lightning team finally getting over the hump and winning the Stanley Cup for the second time in team history (2004). Then, Jon Cooper led the team to another title the following year, that, combined with the Buccaneers’ title in between, had Tampa Bay celebrating in rapid succession like few other cities in history.

Add in the Rays’ march to the World Series, and Tampa Bay had one of the most unforgettable sports years in its history. But how did it stack up compared to the best years ever for a metro area? Well, we can dig into the historical data to analyze which areas had the best years ever by win percentage.

We recently took a look at how Detroit’s recent run compared to the worst years ever for a metro area, and we’ll use the same parameters here. We ignored this year’s baseball season (since it is not complete) and grouped the MLB and NFL seasons with the NBA and NHL seasons that followed. So, the 2020 MLB and NFL seasons are grouped with the 2020-21 NBA and NHL seasons. We used points percentage to determine the NHL winning percentage and added up winning percentages and divided them by the number of teams so baseball wasn’t weighted more heavily.

Also, the teams are grouped by metro areas, so teams could be in different cities but the same metro area, such as Los Angeles and Anaheim, and be included in the same group. This time, we only included metro areas with at least three teams since Tampa Bay doesn’t carry an NBA team.

Here are the sixth- to 10th-worst years for a metro area before we move on to the top five:

Now, on to the top five sports years of all time:

The 2010-11 Boston winning percentage is less than one percentage point behind the same city two years prior. And if you are sick of seeing Boston on this list, you might want to click away now.

One consolation to the any anti-Boston readers out there is that 2008-09 probably isn’t looked at that fondly by the Boston faithful due to some bad injuries and heartbreaking Game 7s.

Tom Brady couldn’t complete one game before he tore his ACL and MCL after a hit by Kansas City Chiefs defender Bernard Pollard. Matt Cassel performed capably in his absence, but that only left the Patriots on the wrong side of history as the second team ever to miss the playoffs after going 11-5.

Kevin Garnett’s season-ending injury left the Celtics short-handed while they attempted to defend their crown. After an entertaining seven-game series win against the Bulls, Boston lost to the Orlando Magic in seven games in the second round. It was the first time the Celtics had ever lost a series after leading 3-2.

The Red Sox were also defending a title, and had another excellent season at 95-67. The Tampa Bay Rays were a bit better, though, at 97-65 to win the AL East. The Rays were also a bit better in the ALCS, getting by the Red Sox 3-1 in Game 7 behind a stellar seven-inning, two-hit effort from Matt Garza and a four-out save from David Price.

The Bruins had the most points in the Eastern Conference, but also lost a tough Game 7 to the sixth-seeded Carolina Hurricanes. Scott Walker scored his first playoff goal in overtime to send the Bruins home.

Another dominant year for Beantown (A different city is next, we promise). But this one also tells the story of teams that ultimately fell short in the playoffs.

The Bruins finished just behind the division-winning Tampa Bay Lightning with 112 points, but the playoffs weren’t as close as the Lightning coasted to a 4-1 second-round series win over the Bruins.

The Red Sox won the division at 93-69 before falling in the postseason to the Houston Astros, who went on to win a championship that hasn’t been disputed at all since then.

The Celtics won 55 games and were a game away from an Eastern Conference crown, but LeBron James turned in one of his best playoff performances with 46 points in Game 6 and added another 35 in Game 7 to get the Cleveland Cavaliers back to the Finals.

And the Patriots looked primed to claim another title after a 13-3 regular season before a shocking 41-33 loss to Nick Foles and the Philadelphia Eagles in the Super Bowl.

Atlanta might not be the first city that comes to mind when thinking of successful sports years, but one of the greatest seasons in Falcons history was augmented by the perennial powerhouse Braves of the 1990s and a solid season by the Hawks.

The Hawks finished 31-19 and in fourth place in the East, just two games out of first in the lockout-shortened season. The team’s slow pace paired perfectly with a Dikembe Mutombo-anchored defense as it allowed a league-best 83.9 points per game. The team beat the Detroit Pistons in the first round of the playoffs but were swept by the eighth-seeded New York Knicks in the second round.

The Braves won the most games in the franchise’s history by going 106-56, but they couldn’t get a great offense going frequently enough in a 4-2 series loss to the San Diego Padres in the NLCS. The Braves scored a combined three runs in their four losses in the series.

The Falcons also won the most games in franchise history at 14-2 and had a memorable NFC title win over the 15-1 Minnesota Vikings. Chris Chandler orchestrated a 70-yard drive in overtime to set up a Morten Andersen field goal, which he nailed for a 30-27 win. The Vikings looked poised to lock up the game in the fourth quarter when Gary Anderson, who hadn’t missed a field goal all season, lined up for a 38-yard field goal that would have put the Vikings up 10 with just over two minutes left in the game. But Anderson missed, and the Falcons drove down the field and Terance Mathis caught a 16-yard touchdown with 49 seconds left to send the game to overtime.

The Super Bowl wasn’t as fun for the Falcons. The Denver Broncos controlled most of the game and won 34-19. It was the second straight Super Bowl win for John Elway and Co.

Baltimore was the only metro area to make the list with seasons prior to 1990, and 1968-69 was the better of the city’s two outstanding years.

The Colts went 13-1 in the regular season, avenging their only loss in the Super Bowl by dominating the Browns 34-0. This set up one of the biggest upsets in Super Bowl history when the Colts lost to the New York Jets 16-7 in Super Bowl III in the “Joe Namath Guarantee” game.

The Orioles finished a distant second in the American League – 12 games behind the Detroit Tigers – in a time when only one team from each league advanced to the playoffs. And the Baltimore Bullets had the best record in the Eastern conference at 57-25 but got swept in the first round of the playoffs by the New York Knicks.

The year featuring two titles and one of the most painful losses in Boston history takes the top spot on the list pretty easily – even with a Bruins year that wasn’t outstanding.

The Bruins finished 41-29-12 and snuck into the playoffs as the eighth seed in the East before falling to the top-seeded Montreal Canadiens in seven games.

The Celtics put together a super team before the term was used frequently after acquiring Kevin Garnett and Ray Allen to team up with Paul Pierce. Boston went 66-16 – seven games better than any other team in the NBA. Then, the team won its first (and still only) NBA title since 1986 by beating the Los Angeles Lakers 4-2 in the Finals.

The Red Sox finished tied with the Cleveland Indians for the most wins in MLB (96). But they defeated the Indians in a seven-game ALCS and swept the Colorado Rockies in the World Series for their second title in four years.

The two titles helped numb the pain of a New England Patriots team that finished one game away from perfection. The Patriots are still the only team to finish a 16-game regular-season schedule undefeated. They were heavy favorites over Eli Manning and the 10-6 New York Giants in the Super Bowl and took a lead into the fourth quarter before Manning led the Giants on a game-winning drive that started with 2:39 left and included the now-famous helmet catch by David Tyree and a touchdown by Plaxico Burress with 35 seconds left in the game. With apologies to Joe Namath, it was the biggest upset in Super Bowl History.

So while Tampa Bay may have fallen short of the best sports season of all time, the area did celebrate two titles to match Boston’s 2007-08 total. And the Tampa faithful can look forward to another season where the Rays are heading toward a playoff spot, Brady returns for a loaded Bucs team and the Lightning return a two-time defending champion squad.

Tampa Bay could easily find itself on this list again next year with more titles in tow.