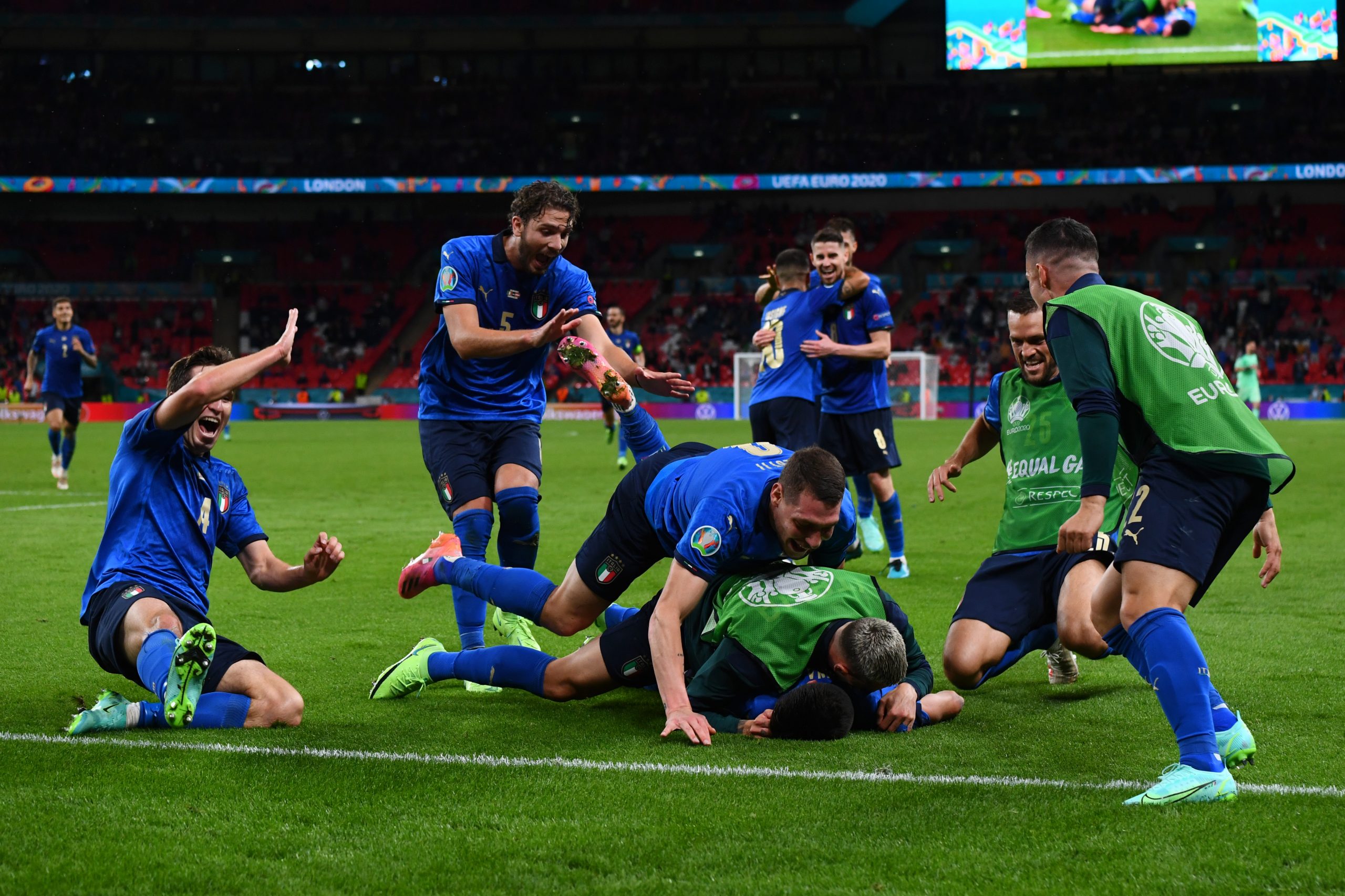 Extra Extra Read All About It

“Good things come to those who wait” is certainly a phrase, and it turns out it was an apt one for the Last 16 clash between Italy and Austria at Wembley. The Italians, swashbuckling darlings of the group stage, struggled to break down their obdurate neighbours in the sort of match that made you wonder if England’s lack of creativity was a more a Wembley issue than a tactical problem. Latitude more than attitude, if you like.

The game went like this: the first half saw 12 shots from Italy. That sounds reasonable but only two of them were on target. Austria had one shot in the entire half, an 18th minute off target effort from Mark Arnautovic, a man who certainly knows about wayward shots in the Transport for London region.

But some games take some time to warm up. Let’s give Roberto Mancini some time with his players at half-time and see what he can come up with. Reader, the second half was less productive than the first. Italy had only six shots, with none of them on target. Austria did improve, with eight efforts, but only one of them forced Gianluigi Donnarumma into a save. As the clock ran down, extra-time not only felt likely, it felt inevitable. The previous four knockout games at Wembley had all gone to 120 minutes (the 1966 World Cup final, England’s quarter-final and semi-final at Euro 96, and the final between Germany and the Czech Republic), and this one did too. It’s what happens. It’s the Wembley Way.

As people prepared themselves for a tactically interesting additional 30 minutes something magical happened: the game came to life. Federico Chiesa scored one of the best penalty-box based goals Euro 2020 has seen so far (Denmark, take note) and then fellow substitute Matteo Pessina added a second. Austrian sub Sasa Kalajdzic scored a header from an existential angle to give the landlocked nation brief hope of a comeback but… it didn’t happen. This was Italy’s eighth European Championship game to go to extra time but the first time they had actually scored in the additional overtime, and it was the first time a team had ever had two substitutes score in extra-time in a Euros match. The Euro 96 semi-final mentioned above saw England manager Terry Venables fail to make a single change in 120 minutes of football against Germany. Italy did not make that mistake. They were never likely to, frankly.

In what expected goals experts are calling “bringing balance to the force”, the game ended 2-1 to Italy on xG as well as actual goals. Italy had twice as many shots on target in the first half of extra time than they had in 90 minutes and 1.7 of that 3.0 xG in the game came in the additional 30 minutes. Sometimes extra-time can seem like needless prologue to the penalty shootout, but in this game it was essentially the entire contest.

The problem with xG is you can’t score a fraction of a goal can you!! pic.twitter.com/5Hy7lbWBNA— Duncan Alexander (@oilysailor) June 26, 2021

Before tonight we had Italy with an 8% chance of winning the tournament. That has risen to 10.5%. It would surely be higher but Italy’s reward for cruising through their group stage in style was to be placed into the harder side of the draw. The three teams above them in the predictor, France, Belgium and Spain are all potential opponents if they are to make it all the way to the final. In a game of half chances, it’s the half of the competition that remains the nagging doubt as Mancini’s men head to the quarter-finals. DA

It could have been so much different for Wales.

An opening 15 minutes in Amsterdam with Gareth Bale and Daniel James overlapping down the wings, piled pressure on Denmark’s defence as the Welsh registered seven shots (one on target) in the opening 18 minutes, more than the Danish faced in the entirety of any match in the group stage. (Russia: six, Belgium: six, Finland: one)

But that early promise would be slowed. The following 15-minute spell saw Denmark have 72.2% of the possession and that pressure would eventually tell. Kasper Dolberg’s strike from outside the box their third of the tournament – more than any other nation in this year’s tournament and only trailing France (five in 1980) and Belgium (four in 2016) in a single edition of the competition.

It’s probably no surprise that Dolberg would feel comfortable in the surroundings of the Johan Cruyff Arena. The former Ajax youngster’s second after the break, courtesy of a woeful clearance from Neco Williams, making him the first Danish player to hit a double in a major tournament since Nicklas Bendtner against Portugal at Euro 2012. So, expect that pants deal to be along any time soon.

A huge ovation from the many Danish fans who made the trip to the Netherlands, the first game Denmark have played outside their country in the tournament, greeted his substitution in the 70th minute after becoming the youngest player to score at least twice in a single knockout round game in the European Championship finals since Mario Balotelli against Germany (2012, semi-finals).

From there, Wales were given the time of possession with the 386 passes their highest total in a single match at the tournament. But having been content to sit back, Joakim Maehle’s third was swiftly followed by Harry Wilson’s sending off – making them the first nation to have two players sent off in a single European Championship since Switzerland and Russia (2004).

All that was left was for Martin Braithwaite to finally break his duck at the tournament, with a little bit of help from VAR, with his 13th attempt, which is the most a single player has had at the tournament so far.

Overall, it has been quite a remarkable turnaround from Denmark’s first two games at the tournament where 43 shots produced just one goal. In their last two games, 32 shots have produced eight goals, making them the first nation to score four or more goals in consecutive matches in the history of the European Championship.

Wales, meanwhile, suffered their heaviest loss in a competitive match since a 1-6 thrashing by Serbia in September 2012 (1-6).

The only cause for worry for Denmark ahead of their quarter-final clash against either the Netherlands or Czech Republic in Baku next Saturday – a few injury concerns with the influential Simon Kjaer having to leave the scene with a what looked like a slight pull of his hamstring during the second half. GB

After the madness that was the final day of group stage action, here we are – the business end of Euro 2020. So far, we’ve seen a record number of goals scored in a group stage (94, aiming to topple to the overall record of 108 set in 2016), penalties missed aplenty (six in all) and a record-setting eight own goals, helped in part by some questionable goalkeeping.

Now we’ve caught our breath and had time to process what’s gone before, the real drama of the knockout stages can begin. The Last 16 should bring it all – old international rivalries reignited, European heavyweights squaring off as well as intriguing contests between some less fancied nations.

To kick things off, we head to Amsterdam to see Euro 2016 surprise package Wales take on the country that defined winning against all odds in 1992, Denmark. The Danes’ experience in this tournament has obviously been defined by the scenes in their first match that transcends the sport, but their response since has been remarkable – first taking Belgium close then sweeping Russia aside in spectacular fashion. Consequently, they became the first team in European Championship history to lose their opening two games at a tournament and still make the knockout stage.

Wales have shown over the last two tournaments that they’re no pushovers. They’ve have won five of their nine games at the European Championships, the best win rate (55.6%) of any nation in the competition’s history. Despite losing to Italy, Robert Page’s men made the most of their second match against Turkey that has ultimately got them to this hurdle.

Denmark are given a near two thirds majority of keeping their remarkable run going and beating Wales (64.8%). Only the Dutch (44) forced more high turnovers than Denmark (37) in the group stage, with eight of those resulting in a shot (one goal). Denmark (59) also had the second most shots in the group stage, one behind Italy.

Wales were more sedate in pressing, forcing only six high turnovers, the joint-fewest of any team along with Slovakia. Only four teams had a higher expected goals against figure than Wales’ 4.8 in the group stage, all of whom finished bottom of their group. Things may get tougher from here on, but they at least have the experience of 2016 to draw upon.

By virtue of a kinder potential path, we give Denmark a 29.6% chance of making it to the semi-finals, with the winner of this matchup facing the winner of the Netherlands against the Czech Republic. Could momentum now truly be behind the neutrals’ favourites?

To conclude the opening day of knockout stage action, we take our first trip of five to Wembley Stadium, with both Italy and Austria hoping to make London a temporary home for the rest of the tournament.

Playing in the latter stages of tournaments isn’t something Austria are used to in modern times, with this being their first appearance in a knockout stage of a tournament since the 1954 World Cup, and their first of any kind in the Euros.

Standing in their way are Roberto Mancini’s Italy, who were arguably the most impressive team in the group stage and their riding the crest of a wave. Italy are currently unbeaten in 30 games (W25 D5), the joint-longest run in their history, equalling a run under Vittorio Pozzo between 1935 and 1939. They’ve won their last 11 matches without conceding a single goal and will be thankful at least that they’ve avoided an opponent with a bigger pedigree. With Belgium or Portugal waiting in the wings as quarter-final opponents, this is an opportunity to put a real marker down.

Italy are one of two teams yet to concede in the tournament, along with England. They faced the joint-fewest shots in the groups (12, same as Spain) and taken the most themselves (60), suggesting they’re more than worthy of being amongst the tournament favourites. Austria could prove a different proposition, though. They are accustomed to applying pressure, with the third-most pressed sequences on opponents (56), behind only Spain (60) and the Netherlands (58), but whether Italy allow them to is another matter.

Heading into the weekend, only Spain (77.4%) have a higher win percentage probability than Italy (75.9%) of the Last 16 ties. Austria are the rank outsiders based on our prediction model to go all the way (0.1%), with Italy currently our sixth favourites (8%) and keen to make it their fourth EUROs in a row where they’ve made the final eight. CM