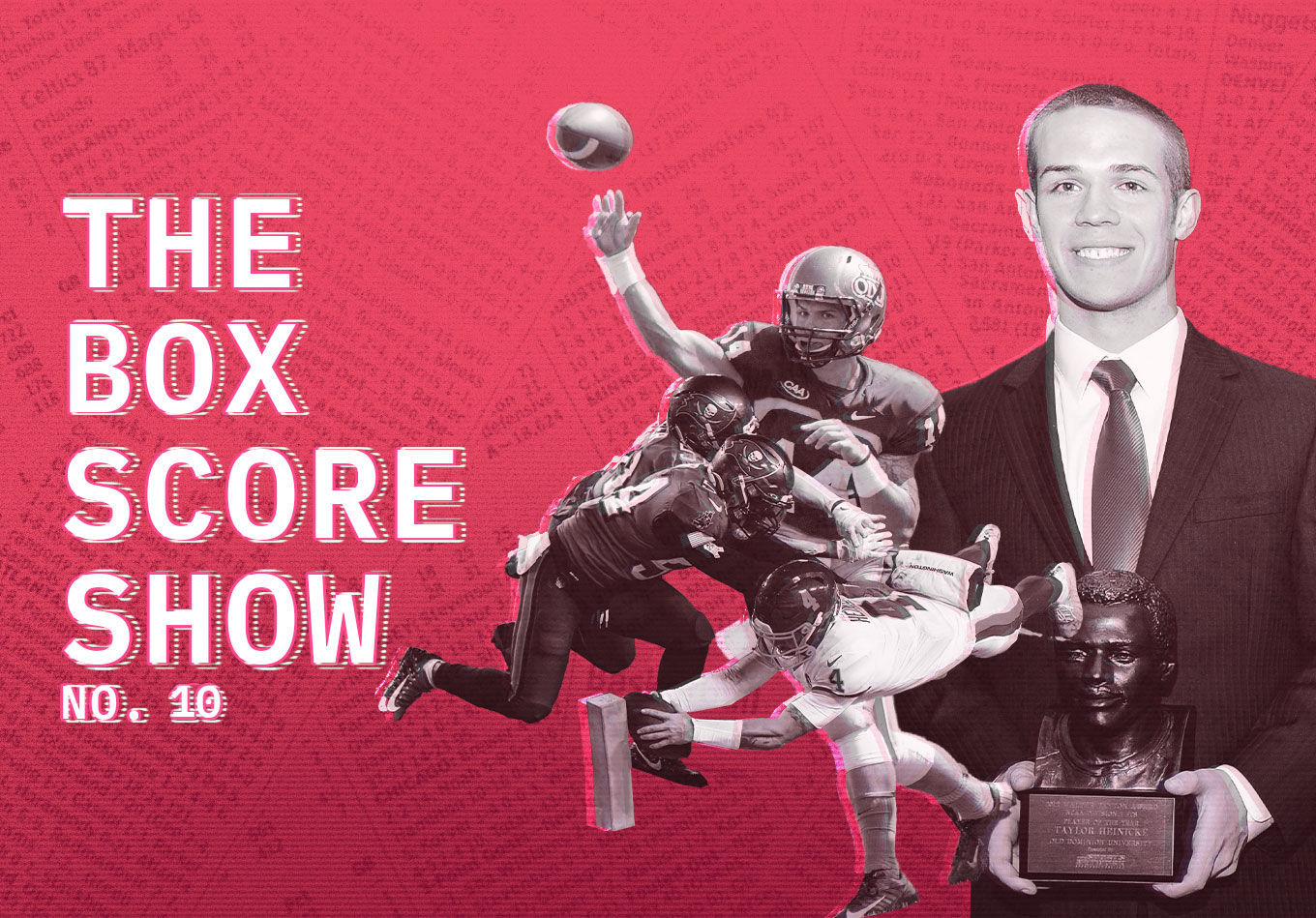 It’s the box score that still drops jaws. On Sept. 22, 2012, Heinicke shattered several FCS records while throwing the ball 79 times and helping Old Dominion rally to a 64-61 win over New Hampshire. Here’s how he did it.

Highlighted by a memorable dive to the pylon for a touchdown, quarterback Taylor Heinicke basically leaped into the consciousness of NFL fans with a scintillating playoff performance for the Washington Football Team in January.

It all seemed to come out of nowhere, but in FCS college football, Heinicke’s skills and exploits were recognized nearly a decade earlier.

The highlight performance of Heinicke’s college career occurred on Sept. 22, 2012, when he set FCS single-record records with 730 passing yards and 791 yards of total offense while helping Old Dominion rally to a 64-61 victory over New Hampshire.

“One of the most fun games I’ve ever (coached) in,” UNH’s Sean McDonnell said earlier this year, despite having been on the losing end.

The box score from that CAA Football game still drops jaws. Even though Heinicke had shredded Campbell for 527 yards of total offense and eight touchdowns, including 486 and seven, respectively, through the air only a week earlier. The 6-foot-1, 205-pound sophomore was on his way to receiving the 2012 Walter Payton Award as the FCS offensive player of the year.

Old Dominion, under coach Bobby Wilder, was a start-up program playing in just its fifth season of existence, but also its final one on the FCS level before it began to transition into the FBS a year later. Heinicke was an electrifying dual-threat who processed defenses quickly, then dissected them over a four-year career in which he passed for nearly 15,000 yards and 132 touchdown passes against only 39 interceptions, rushed for another 22 TDs, and set 32 school records.

‘MAN, HE WAS SPECIAL, HE MADE A TON OF PLAYS’

ODU was ranked fifth in the nation and New Hampshire 18th when they met in the conference opener. The Wildcats entered the contest with a 2-1 record but only with an FBS loss and the host Monarchs had won their first three games. Foreman Field in Norfolk, Virginia, was jammed-packed with 20,068 fans, eager to see an early pivotal game. How entertaining it became was beyond everyone’s imagination.

UNH quarterback Andy Vailas was basically on target as much as Heinicke for the first 2 ½ quarters, helping the Wildcats to a 16-3 lead through the first and throwing for four of his five touchdown passes while they built a 47-24 cushion midway through the third.

Considering UNH defenders tried to get into the backfield to hurry passes, ODU offensive coordinator Brian Scott gave Heinicke free command to change plays at the line of scrimmage based on defensive formations and told him the Monarchs were going to pass on every down.

“I thought he was joking,” Heinicke recalled earlier this year on the Washington Football Team podcast.

While mounting its comeback, ODU scored touchdowns on five straight possessions, going 90, 98, 81, 75 and 89 yards. Heinicke connected with 5-foot-7 wide receiver Nick Mayers for two of the scores in the first five minutes of the fourth quarter, adding two-point passes each time to pull the Monarchs into a 54-54 tie.

After ODU forced a UNH punt, Heinicke threw eight times on the Monarchs’ next drive before they went ahead for the first time on Angus Harper’s 2-yard run to make it 61-54 with 4:39 left.

UNH came right back on its ensuing possession when Vailas connected on a 45-yard touchdown pass to wide receiver R.J. Harris to tie the game at 61 with 3:22 remaining.

Of course, that left too much time for Heinicke. The Monarchs took possession at their 18, and Heinicke opened the drive with completions of 26, 23 and 7 yards to Mayers. His final completion was an 8-yarder to running back Colby Goodwyn to the UNH 8, where the Monarchs ended the 11-play, 74-yard drive with Jarod Brown kicking a 25-yard field goal to make it 64-61 with 41 seconds remaining.

On UNH’s final drive, Vailas threw the game’s only interception, picked off by ODU safety Andre Simmons near midfield with six seconds left.

“There wasn’t a whole lot of defense played that day,” McDonnell said. “I remember watching (Heinicke) run out there and one thought came to mind: Ricky Santos (UNH’s Payton Award-winning quarterback in 2006). The reason it came to mind was because he would scramble, arm fake, throw it across the field, make a play. He would pump, hit it in the seam, hit the open escape shoot, go.

“I remember Taylor. Man, he was special. He made a ton of plays. But I also remember, our kids were there to make the plays, too.”

Heinicke’s 730 passing yards were a whopping 106 more than the previous FCS single-game high. He threw for five touchdowns while completing 55 of 79 passes, setting FCS records for attempts in a game without an interception as well as passing yards in a quarter (293 in the fourth) and a half (480 in the second). He found 10 different receivers, with Mayers catching 12 passes for 271 yards and three TDs. Heinicke also had 11 carries for a team-high 61 yards, including a 9-yard TD dive to the pylon.

Amazingly, in the three-minute wrap-up by the local Norfolk station that day, the broadcaster takes 2 1/2 minutes before mentioning Heinicke’s record passing yardage.

ODU racked up a school-record 824 offensive yards and New Hampshire gained 725, including Vailas’ 336 through the air and 80 on the ground. Nico Steriti added for 201 rushing yards and two TDs on 21 carries. Somehow there was room for 10 punts in a game that had 195 plays and 74 first downs, and the two teams combined for an FCS single-game record 1,549 offensive yards and a CAA-record 125 points.

Afterward, a modest Heinicke redirected media questions about his heroics by placing praise on his offensive linemen, receivers and coaches. However, in the Virginian-Pilot’s game recap, Wilder said: “The kid’s only played 13 games of college football. He checked off three plays today that you just look at it and say, ‘How did he see that?’

“At 13 games into his college career, he has no limits on what he can do. That’s rare.”

NFL fans saw more than a glimpse of Heinicke’s ability on Jan. 9 against Brady and the Buccaneers, who defeated Washington 31-23. In just his second NFL start, Heinicke passed for over 300 yards and scored on the 8-yard TD dive in the third quarter – one of the more scintillating plays of the postseason. Teammate Chase Young approached Heinicke to celebrate the score, pointing to the name on the back of the quarterback’s jersey in front of a TV camera.

Having spent most of his NFL career on and off practice squads with a short stint in the XFL in 2020, Heinicke signed a two-year contract extension worth up to $8.75 million with Washington in February. He is in the mix to be the team’s starting quarterback come Sept. 12 against the Los Angeles Chargers.

Of course, no future game figures to be as prolific for Heinicke as Sept. 22, 2012. It’s a day that a Monarch became the king of FCS passing performances.