Bosnian Beast vs. The Joker: What Makes Jusuf Nurkic the Key to Unlocking a Blazers Rally | The Analyst 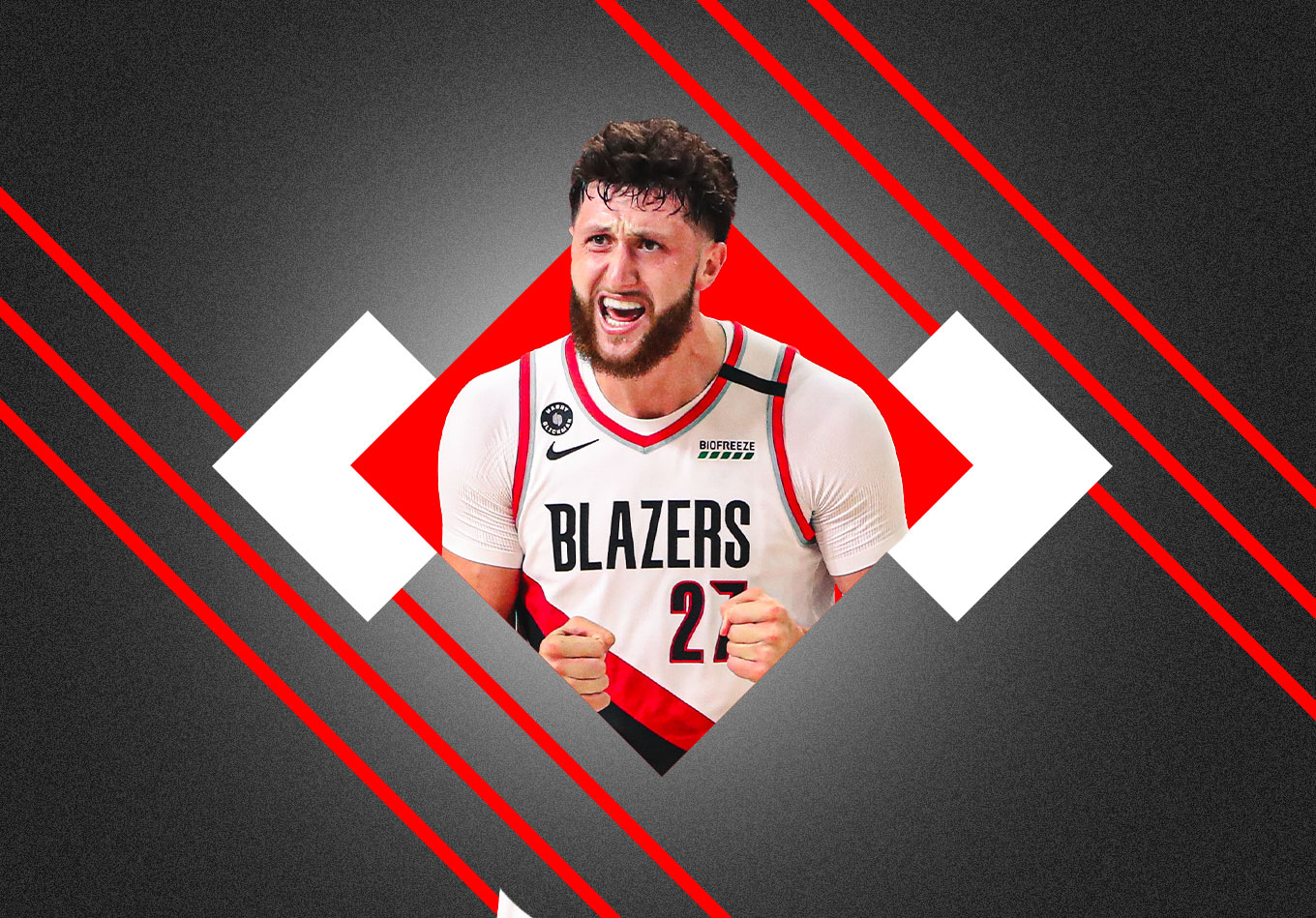 Bosnian Beast vs. The Joker: What Makes Jusuf Nurkic the Key to Unlocking a Blazers Rally

There are few players in the NBA playoffs with more taxing responsibilities than Jusuf Nurkic.

He must slow Nikola Jokic, who possesses strength, grace, versatile shot-making, genius flair, and more. He must serve as a complementary offensive hub for the Portland Trail Blazers, galvanize dribble hand-offs, spring free the scoring triad of Damian Lillard, CJ McCollum and Norman Powell via screens and create on the short roll as both a finisher and playmaker.

Much is required of Nurkic in this first-round bout against the Denver Nuggets, almost certainly more than at any other point throughout his career. The results, through five games, are as expected: inconsistent.

In Portland’s three losses, he fouled out. In its two victories, he did not. The team’s only blowout loss came in Game 2, Nurkic’s worst performance of the series. Although Lillard drives the Blazers toward success, Nurkic, and largely his availability, seems to be the one who determines whether they’ll cross through that threshold or just approach it.

Most prominently, Nurkic staying on the court and avoiding foul trouble is his pressing duty. Nobody can stop Jokic. He is a superstar, arguably the NBA’s best player and inarguably this season’s MVP. But Nurkic touts the strength to prevent his former teammate from carving the deep position he pursues and landing his preferred spots in the post, while also possessing some of the nimble footspeed to not be totally torched every play. Jokic is quicker, but the gap is smaller in comparison with the majority of opposing big men.

All those little advantages and edges Jokic seizes with his burly frame exist less frequently against Nurkic, who is a very large human in his own right and tends to close them off. That coaxes Jokic to tap into his elite tough shot-making, which he’s maximized this series and all season, but it remains a vastly more difficult means of scoring with a lower success rate.

Nurkic is not suddenly Jokic’s Kryptonite. The Nuggets have discovered success isolating Nurkic in space, whether it be in pick-and-rolls/pops or venturing Jokic through off-ball screens. It’s a rather challenging hurdle for someone of Nurkic’s size to navigate. The air is easier to breathe for Jokic in these situations and his quality of looks increases. But the numbers and film align here, conveying the obvious fact that scoring has been significantly tougher when Jokic is pitted against Nurkic.

Because when any other Blazers defenders – predominantly Carmelo Anthony, Enes Kanter and Robert Covington – find themselves assuming this assignment, Jokic is carving them up. He’s seamlessly inhabiting his comfort zones, too quick for Kanter and too tall/wide for the forward tandem. Without Nurkic available, Jokic’s rim frequency spikes from .215 to .306, where he’s shooting 80.0% in this series. Small-ball or Kanter-featured lineups lack any viable paint protection, and Jokic exploits that. His life is much simpler in these matchups.

On the final bucket above, note how Nurkic is in the game, but not covering Jokic. Five seconds prior, he’d picked up his first foul, so Portland elected to keep him in and swap assignments with Anthony. The foul, though, wasn’t necessary. It occurred 24 feet from the basket, when Nurkic grew overly physical in barring Jokic from rolling inside.

Nurkic’s resume of fouls in this series is littered with similar examples. Wrangling with Jokic hasn’t really been the issue. Only 10 of his 25 fouls – including that one – have been committed against Jokic. Two fouls per game while defending the star big man primarily in single coverage is tenable. Pick up one or two more in a given game and there will not be a problem. Except, one or two has been, on average, three every game.

The superfluous fouls are limiting Nurkic’s playing time, forcing him to the bench or quelling his two-way vigor. Illegal screens, being too handsy off the ball or contesting a shot late in the game when he already has five fouls (he did this two of the three times he’s fouled out) are the culprits. Those cannot happen. To win two more games, the Blazers need Nurkic playing 30-plus minutes each night. He’s the lone guy who forces Jokic to reconsider his Plan A, a paramount happenstance in diminishing a superstar’s footprint.

Portland needs him on both ends, though, not just as a defensive specialist, particularly with the Nuggets’ ball-screen coverage against Lillard. They’re hedging, trapping or playing drop above or at the 3-point arc, doing what they can, despite inadequate personnel, to contain Lillard or guide the ball out his hands. As such, Nurkic is commonly afforded space to operate on the short roll, facing 4-on-3 chances, confronted by undersized help defenders and becoming a crucial decision-maker for the Blazers’ elite offense.

This, again, is where he must balance finesse and force. The short-roll should be paradise for him. He’s huge, a talented passing big and maneuvers well for his size. And yet, finishing has never been a strong suit of his. He lacks balance and dexterity, often hurrying attempts or flipping up off-balance shots.

During the regular season, he shot 55.4% at the rim – the lowest mark of his Blazers tenure. For his career, he’s shooting 54.6% at the rim. Those are not good clips for most players, let alone a hulking center such as Nurkic. In this series, at least, it’s ticked up to 60.5%. He’s been mildly better at staying calm, not rushing decisions, controlling his body and applying the mammoth size discrepancy between himself and oncoming helpers. Emblematic of his holistic series showing, the outcomes when he acts as a short-roll decision-maker have been mixed.

None of Portland’s other options at the 5 – Kanter, Covington or Rondae Hollis-Jefferson – can even offer this dynamic. The latter two are insufficient finishers lacking a size surplus, while the former is a poor dribbler and passer. Nurkic has to play heavy minutes and offer a credible release valve for Lillard or McCollum.

His passing, meanwhile, has shined in stationary (at the elbows, for instance) rather than active contexts. He doesn’t tend to process reads as decisively or prudently on the move, establishing dissonance between the impact of his high-post and short-roll facilitating.

Nurkic is quite talented in the former, and helps diversify Portland’s attack, enabling its guards/wings to function off the ball and leverage their shooting gravity, cutting into a vacant paint with Nurkic luring centers away from the cup. His touch and ball placement are exquisite. The harmony he’s cultivated with many of them spark anticipatory passes for which the defense is not prepared.

Through five games, the Blazers have outscored the Nuggets by a team-high 54 points during Nurkic’s 140 minutes. Portland’s insufficient alternative big men are tied to this data, but it underscores the critical nature of his impact. He’s posing (relative) problems for Jokic, relieving stress offensively for a prolific backcourt and helping catalyze buckets with his passing.

Just 140 minutes, though, is the kicker. Twenty-eight minutes per game will not suffice if he and Portland intend to actualize goals beyond a mere playoff appearance.

Game 6 threatens elimination. Nurkic cannot be watching from the sidelines for 20 minutes. He’s too good and too essential, and that is why so much is asked of him in this series.