Remembering Tate vs. Lindsay Duel on Record-Setting Night | The Analyst 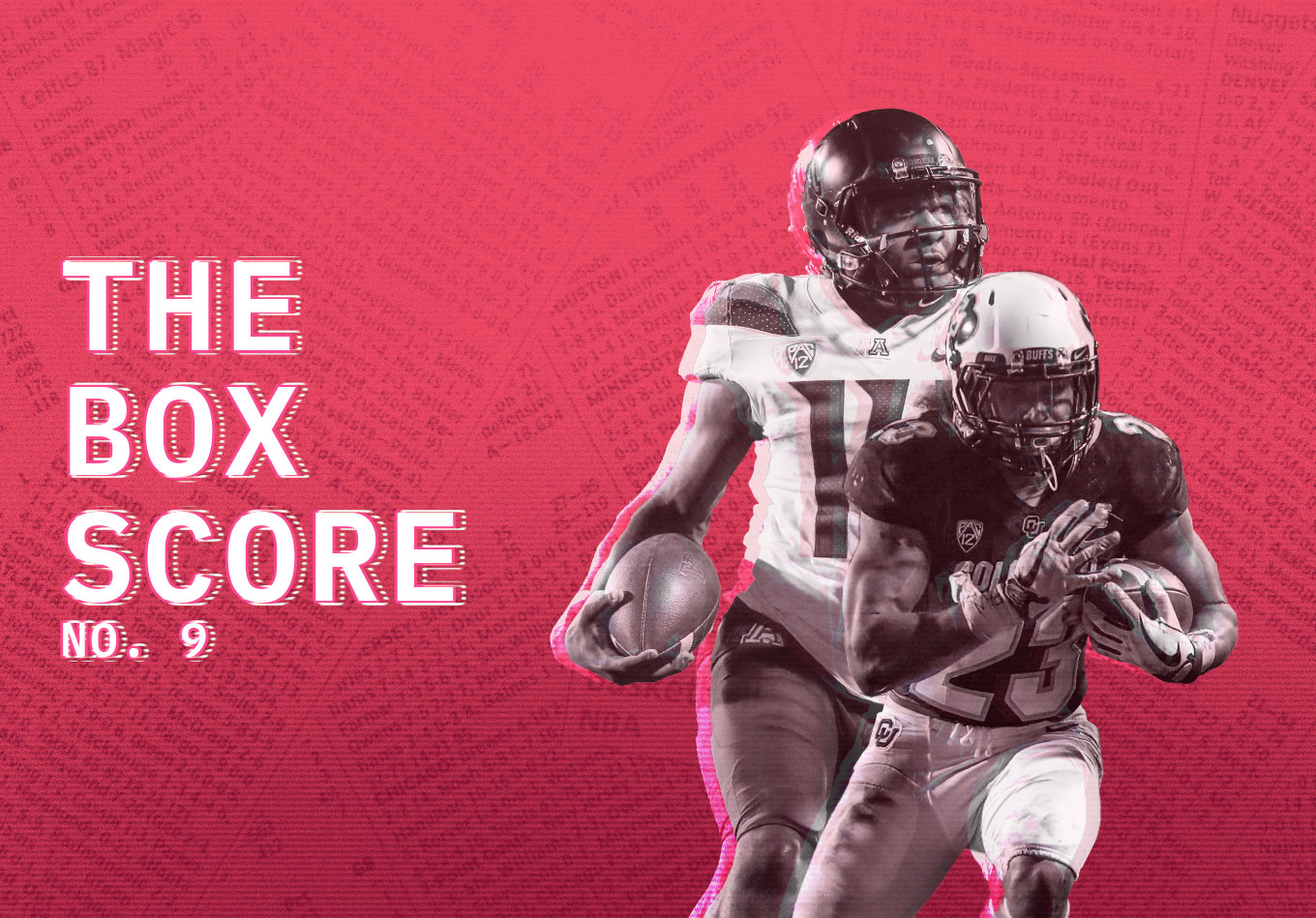 The Duel No One Saw Coming

The Box Score is a series in which we select one impressive box score, research it, watch the game and write about it. In this edition, we reflect on an unforgettable night in Boulder when Arizona’s Khalil Tate and Colorado’s Phillip Lindsay had a historic duel on the ground.

It was a tweet that surely only diehards of Arizona football cared about the night of Oct. 7, 2017.

With Tate having been sidelined for nearly a month and not atop the team’s depth chart through any of the first four games, the tweet could have been construed as information overload. Not even the perceptive Lev could fathom what Tate was capable of doing in the Pac-12 matchup.

Ironically, an injury to starter Brandon Dawkins on the game’s opening possession put Tate back on the field. While he completed passes on his first two plays, it wasn’t until the Wildcats’ next drive that he took off – literally.

Tate needed only 14 carries to rush for 327 yards – the FBS single-game record for a quarterback – in Arizona’s 45-42 win. He scored four touchdowns, and as a bonus, completed 12 of 13 pass attempts (the lone incompletion was a drop) for 154 yards and another TD in about as scintillating a performance as possible for someone who wasn’t necessarily supposed to get behind center.

“I just knew when I got in the game, I just needed to keep the team rolling, put points on the board,” Tate said afterward.

It turned out Arizona needed every yard of the blur left in Tate’s trail. Future NFL running back Phillip Lindsay wanted to duel that night, powering Colorado with 281 rushing yards and three touchdowns on a school-record 41 carries. He and Tate set the FBS record for most combined rushing yards by opposing players at 608.

Back and Forth, They Went

In earlier coaching stops, Arizona coach Rich Rodriguez mentored dual-threat quarterbacks such as West Virginia’s Patrick White and Michigan’s Denard Robinson. Tate’s field vision and physical strength were evident, but there was need for an adjustment. “When he was younger, and even earlier in the year, he would try to lower his shoulder,” Rodriguez said. “Then he realized that he’s got enough athleticism to make somebody miss, too.”

When the 6-foot, 210-pound Tate kept the ball to himself, he was hardly touched by Colorado defenders, opening Arizona’s second possession with a 58-yard touchdown run. Like Tate, Lindsay didn’t have a carry on Colorado’s first possession, but he went for 12 yards and a first down to open the Buffaloes’ second drive and then capped it with a 5-yard touchdown.

Back and forth, they went. Tate raced into the Colorado end zone from 28 yards out to give Arizona a 14-7 lead late in the first quarter. Tate, also a speedy, slippery runner at a mere 5-foot-8, 190 pounds scored on a 1-yard run to tie the game again with just 2:24 left in the second. It capped a 19-play drive that chewed up – no, devoured – 9 minutes, 34 seconds of game clock.

Sure enough, Tate responded with a 37-yard run to open the Wildcats’ next possession and quickly rang the scoreboard again with a 13-yard scoring pass to Shun Brown to put them back ahead 21-14 before halftime.

“After his fourth time out there,” Colorado coach Mike MacIntyre said of Tate, “I said I don’t know if we’re ever going to get this kid down. We did everything we could.”

It worsened for the Buffs when Tate scored on a 47-yard run to end Arizona’s first possession in the third quarter. But Lindsay nearly matched the distance with a 45-yard carry on a Colorado drive that began late in the third and spilled over into the fourth when quarterback Steven Montez passed for a 2-yard TD and pulled the Buffs within 35-28 with 13:21 to go.

Rodriguez and staff knew what to do – call Tate’s number when the Wildcats began the ensuing possession at their 25. Working out of the shotgun, as he did most of the night, Tate took a snap, feigned a pass to his right and took off up the middle, eventually going in and out of traffic and taking a stutter step before making a reversal of direction and weaving into the Colorado end zone to silence much of the Folsom Field crowd of nearly 50,000. The TD extended the Wildcats’ lead to 42-28.

“More confident, more understandable about the game and more knowledgeable,” was how Tate described the difference between that night and a year earlier, when injuries forced him out of a redshirt and into some struggles as a 17-year-old freshman. He lost in his one start against USC, whose backyard includes Tate’s hometown of Gardena, California.

Tate Finishes off the Duel

While Colorado never led in the wild game against Arizona, Lindsay scored on a 11-yard run with 5:04 left to pull the Buffs within 45-42 and again giving hope of a comeback.

Their defense quickly forced Arizona into 3rd-and-4 at its 31. This time, Tate used his arm to extend the drive with an 8-yard strike to Bryce Wolma. He then clinched the win with a 31-yard run with just over a minute left, pushing Arizona to 3-2 and dropping Colorado to 3-3.

“I knew it was third down and the crowd was really energetic,” Tate said. “We did an outside zone and I knew I had to get it. If I didn’t get it, it was on me.”

No Arizona quarterback had ever rushed for 200 yards in a game, let alone post Tate’s feat. His 327 rushing yards broke the previous FBS quarterback mark of 321, set by Northern Illinois’ Jordan Lynch in 2013 with nearly twice as many carries: 27. Tate averaged an absurd 23.4 yards on his 14 carries.

Lindsay added 39 receiving yards to his rushing total to finish with 310 all-purpose yards, and the senior became the school’s all-time leader in that category with a run in the third quarter. He went on to end his career with 5,760 all-purpose yards – 932 more than the previous school record.

But the night belonged to Tate, his star born while triggering a four-game winning streak in which Arizona’s new No. 1 quarterback – his legs providing the hostile takeover – claimed Pac-12 offensive player of the week honors in an unprecedented four straight weeks. He went on to rush for 1,411 yards, becoming the first signal-caller in conference history to surpass 1,000 in a season.

While the upward trajectory of Tate’s career seemed limitless, it was never the same after that magical month. Various injuries and a change in coaching staff after the 2017 season led to a roller coaster ride. He only rushed for 637 yards and five touchdowns over his junior and senior seasons despite having more carries in twice as many games as he did in his sophomore campaign.

Now trying to forge an NFL career, Tate was signed and waived by the Philadelphia Eagles before the 2020 season before returning to the franchise in January on a futures contract. He’s been switched to wide receiver at the pro level.

Lindsay is still starring in the same old way. The former standout with his hometown Denver Broncos rushed for over 1,200 yards in each of his first two seasons in 2018 and ’19 to become the first undrafted player to have back-to-back 1,000-yard campaigns. He became a free agent in March and signed with the Houston Texans.