Deer in Headlights: How Loaded Brooklyn Is Helping Giannis, Milwaukee Fall Into Old Habits | The Analyst 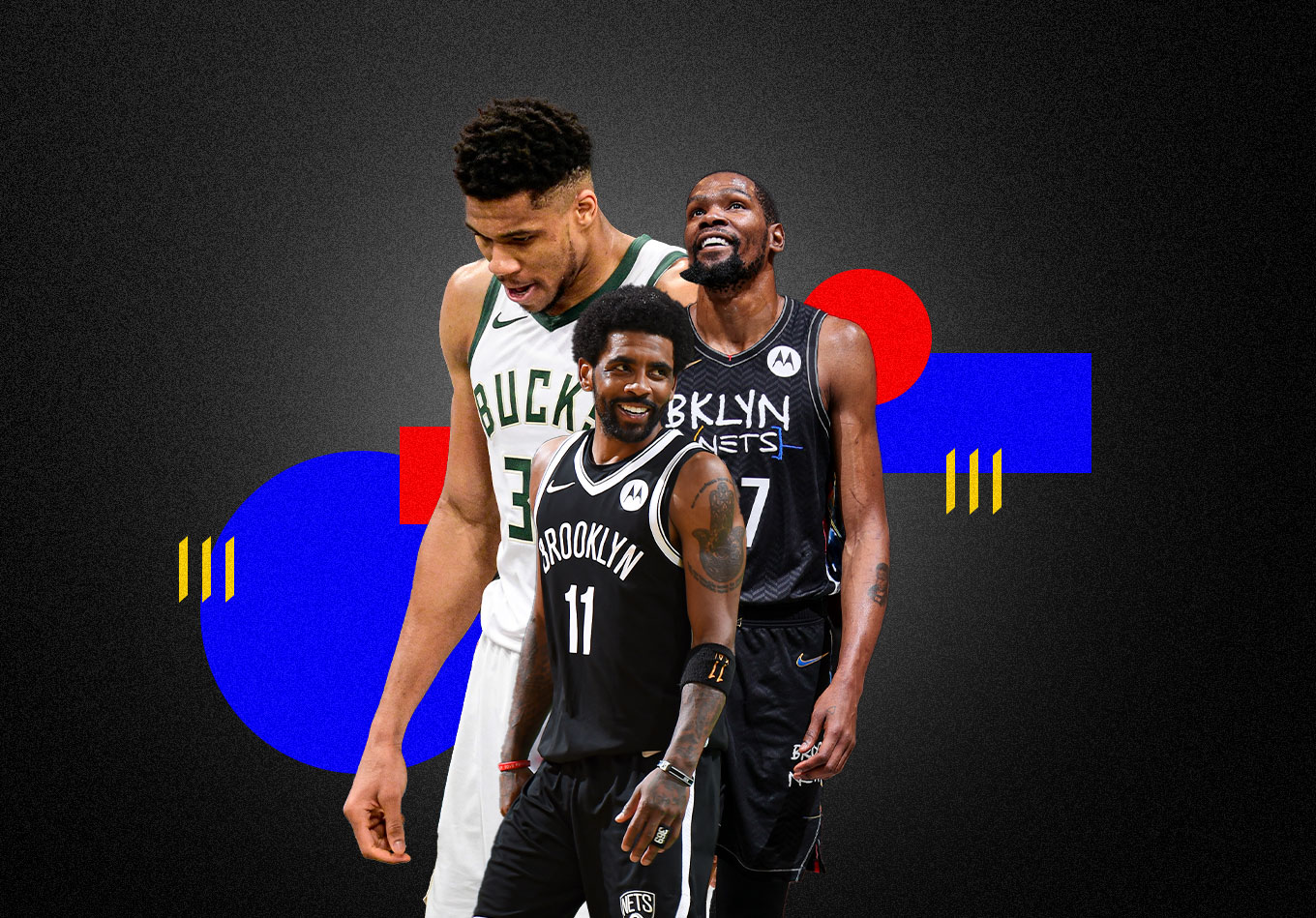 Early in the second quarter of Monday’s Game 2 between the Milwaukee Bucks and Brooklyn Nets, Brook Lopez and Landry Shamet wrangled for superiority in the mid-post.

Lopez had just set a screen, sparking the Nets’ switch-heavy defense into motion, and was now bestowed an apparent advantage over the wiry Shamet. Except, Shamet battled to front the 7-footer while Blake Griffin shaded back-side help in the paint. A once-simplistic entry pass from Jrue Holiday grew complicated and delayed.

Meanwhile, Griffin’s assignment, Giannis Antetokounmpo, found himself open on the opposite wing with space to attack and a lane to the rim – if given the ball. The ball did not reach him. Holiday lasered in on feeding Lopez and never glanced elsewhere.

Brooklyn’s strategy left itself susceptible to an advantage, but the Lopez-Shamet tango dominated Holiday’s thoughts. One guy is 7 feet, 280 pounds; the other is 6-foot-4, 190 pounds. Exploiting that disparity seemed logical.

And that is exactly how the Nets want opponents to interpret their defensive scheme as they lure teams to deviate from their principles and lean all the way into mismatch-hunting. Through two games of the Eastern Conference semifinals, it is largely how the Bucks have operated and largely why they are in an 0-2 hole, sporting a ghastly 97.0 offensive rating against the regular season’s 22nd-ranked defense.

The Nets have upped their execution and communication by cohesively switching screens to erase pockets of space and rotating for help responsibilities with timeliness rarely seen throughout the year. Kevin Durant is maximizing his pestering length to alter shots. Joe Harris and Kyrie Irving are unrelenting on switches, while the former has been exceptional as an interior team defender. Griffin is playing his tail off and helped limit Giannis to 18 points on 15 shots in 31 minutes in Game 2, with his impact against the two-time MVP best summarized through deterrence rather than field goal percentage.

But many of Milwaukee’s shortcomings are self-inflicted. At the expense of seeding and wins, the Bucks spent much of the regular season diversifying their attack for playoff optimization. Yet after showcasing those amendments in a first-round sweep over the Miami Heat, they’ve deviated to individualistic tendencies and overindulged in bullying or prioritizing perceived mismatches.

Fundamentally, the Bucks are trying to out-Nets the Nets, arguably the most prolific offense the league has ever witnessed. They’ve been easily baited out of their style. That should not happen when the last six months were exhausted to master a seemingly improved, playoff-ready approach.

Milwaukee is rushing pull-up jumpers early in the clock or forcing ill-advised decisions, particularly Khris Middleton and Jrue Holiday. The ball movement has also dried up. The Bucks are averaging just 208 passes per game this series, compared to 254.8 during the regular season and 258.3 against Miami. Passing doesn’t necessarily equate to quality offense – the Portland Trail Blazers were 28th in passes but first in adjusted offensive rating this season – but the Bucks have abandoned what worked for them through their initial 76 games of the year.

That precipitous decline in ball movement has also plummeted their assist rate. During the regular season, 56.9% of their buckets came via assists. Against the Nets, that has slipped to 42.7%. So many of their possessions transpire with Middleton or Holiday settling for the first look presented to them as opposed to trusting the offense and opting for pull-up jumpers as a last resort late in the clock.

Holiday’s regressive decision-making has hindered his slashing equity as well. His rim frequency is down from 33.3% in the regular season to 20.7% in this series because he’s prioritizing an intermediate game instead of shots around the basket. Durant’s deployment as a drop big in ball-screens factors into this, but Holiday is primarily just flocking toward dubious scoring choices.

Similarly, Giannis’ rim frequency is down from 49.0% to 38.4%. He’s handing defenses unearned wins with jumpers before the clock demands them, though Griffin’s play warrants considerable merit – not solely against the All-NBA superstar but in other situations, too. He’s leveraging his strength to wall off guys inside and extracting enough lateral mobility to contain drives from a team short on bursty ball-handlers. His defensive performance in these two games are a stark contrast from Round 1.

And yet, even acknowledging Griffin’s yeoman’s work, Giannis is still not entirely catering to his strengths. He was the best player in Game 1, but was much worse in Game 2, in part due to Griffin, but partly because of internal constraints.

Consider back-to-back possessions from the second half of Monday’s rout. The first: Giannis is deployed off the ball and drives with a head of steam, using his length to finish through contact for an and-one. The second: Giannis clanks a pull-up 3 in transition.

The dichotomy here is baffling. Less than 30 seconds earlier, he converted at the rim. Milwaukee achieved a rare stop. The chance to trim a bit more into the deficit was there. Going back to a similar action would be prudent. Instead, the career 28.7% 3-point shooter hoisted a triple six seconds into the possession.

Giannis’ defense has overwhelmingly been excellent so far. He finished with 34 points on 67% true shooting in Game 1. Middleton and Holiday are more prominent reasons the Bucks failed to keep either road game competitive.

But Giannis must be better at home in Game 3. Griffin will foul dudes. He averaged 4.4 fouls per 100 possessions in the regular season with the Nets and is averaging 5.5 during the playoffs. Giannis is a foul magnet. Fadeaways out of the post and pull-up jumpers negate those conflicting trends that would benefit Milwaukee if they clashed.

Giannis cannot saturate his shot profile with those meager attempts, nor can the Bucks continue to ignore their offensive pillars and stumble into Brooklyn’s trap. More empty side pick-and-rolls between him and Holiday (they work!) are imperative. Pinch-post touches that result in rim volume rather than Dirk Nowitzki impressions are vital. Fortitude and patience in isolation must return to his offensive ethos.

To the Nets’ credit, their switching has quieted Bryn Forbes’ marksmanship in the half-court. He took 23 shots per 100 possessions in the first round but is averaging just 15.2 in this round while being unable to spring free for openings as he did against the Heat. Shamet’s size and physicality have also curbed the patented Forbes-Giannis inverted pick-and-roll or dribble hand-off connection. He’s refusing to let Forbes set an effective screen and jolt the defense into scramble mode. Forbes’ off-ball movement and shooting were part of the Bucks’ newfound offensive dynamism and both have been rendered irrelevant.

If Griffin does incur foul trouble at any point again (he fouled out late in Game 1), Durant and Nicolas Claxton would serve as the lone “big men” in Brooklyn’s rotation. Through two games, both the veteran and the youngster have shined defensively.

On switches, Claxton is daring scorers to puncture him off the bounce and watching as they fail. In pick-and-roll coverage, he’s precisely toggling between roller and handler. As an interior helper, he’s already swatted a pair of shots over 28 minutes.

Durant, meanwhile, is applying his 7-foot-5 wingspan to bother the opposition. He glides much more spryly than he did at times against the Boston Celtics last round, increasing his defensive activity off the ball and often functioning as the Nets’ center. Aside from first-half hiccups on the defensive glass in Game 1 versus Brook Lopez, he’s handled the tasks of a traditional 5 quite well.

This series, everyone in the Nets’ eight-man rotation has crafted a (relatively) positive defensive imprint. Durant is no different, aware of his importance to augmenting their colorful offensive escapades with tenable defense.

There are two general perspectives through which to analyze Milwaukee’s offensive pitfalls. Either, it’s low-hanging fruit for improvement to reimplement the methods that yielded a top-five offense and the chance to possibly make this a series again is rather attainable. Or, it’s alarming how swiftly they reverted to hurried decisions and were goaded into mismatch-hunting, just as Brooklyn prefers.

Neither sentiment is encouraging, though, because it concedes an absence of schematic integrity during a year when the Bucks preached and valued it at the cost of regular-season success. Independent of how one explains these struggles, a 2-0 deficit and minus-47 point differential remain.

And those numbers are concrete. No perspective changes their outcomes or existence, meaning Milwaukee’s margin for error has dwindled radically in this series.