Lights Out: The Highest-Scoring Games and Performances in NBA History | The Analyst 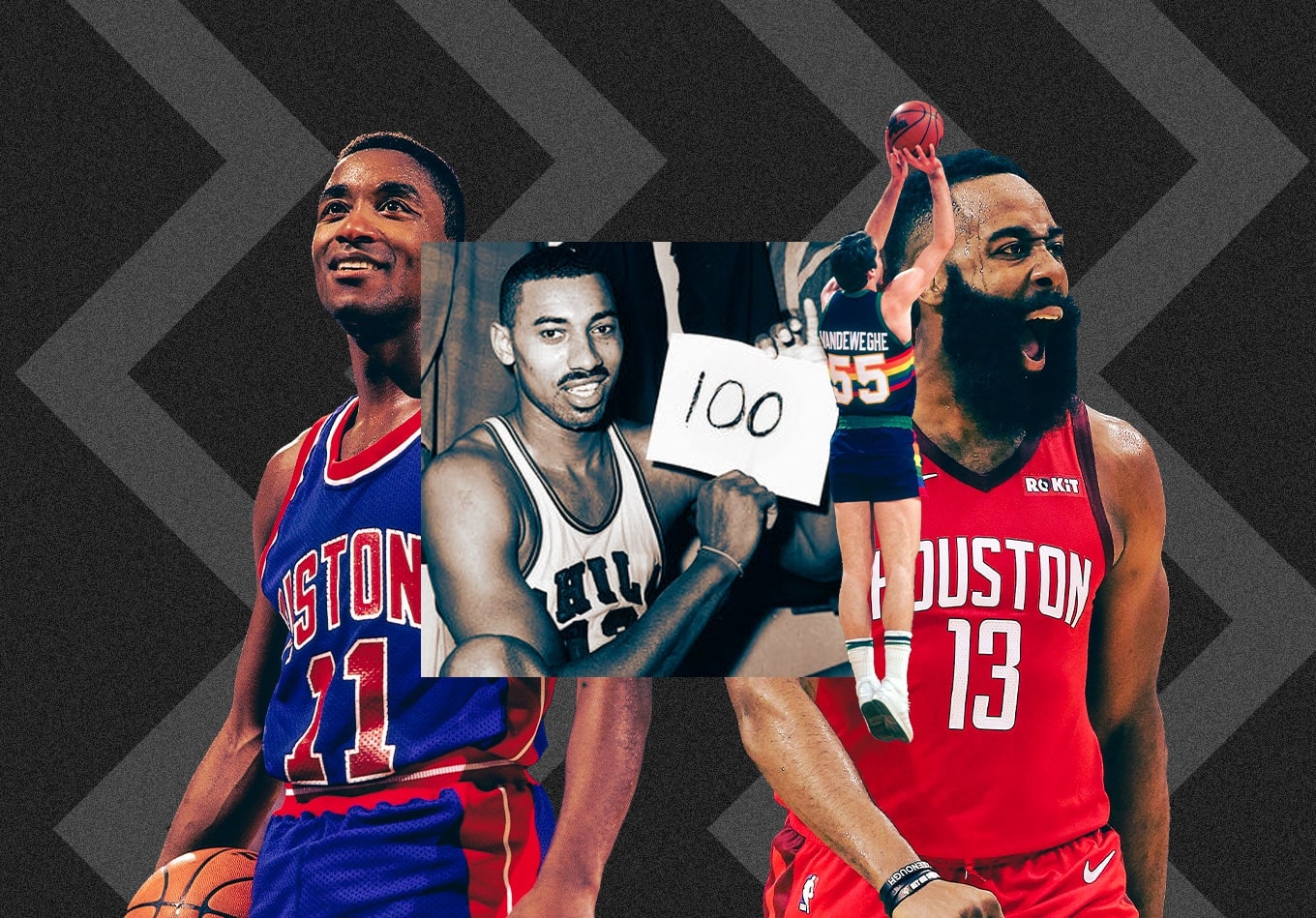 Lights Out: The Highest-Scoring Games and Performances in NBA History

We’re reflecting on some of the highest-scoring NBA games of all time.

Highest-Scoring Game and Most Points by One Team:

The box score reads like an absolute doozy; four players dropped more than 40 points and Kiki VanDeWeghe led the way with 51 for the Denver Nuggets, albeit in a losing effort in triple overtime. Isaiah Thomas played 52 minutes and scored 47 points for the Detroit Pistons. The kicker? There were only four 3s attempted in the entire game (both teams were 1-2 from behind the arc).

Highest-Scoring Game and Most Points by One Team in the 21st Century:

Here’s some of the 21st-century sharpshooting that NBA fans have come to love. The Bulls shot 21 of 48 from 3 while the Hawks were 22 for 60 from beyond the arc. Zach LaVine scored 47 for the Bulls while teammates Lauri Markkanen and Otto Porter Jr. added 31 apiece in the win. Trae Young did most of the heavy lifting for Atlanta with 49 points. The second-highest scorer for the Hawks was Alex Len, who had 24.

This bout was quite the way to start Denver and Golden State’s 1990-91 season. Chris Mullin scored 38 points and Tim Hardaway had 32 to go along with 18 assists in the Warriors’ W. Orlando Woolridge had a team-high 37 for Denver. It was a close-fought battle the entire way with both teams scoring between 36-44 points in each quarter. Only six 3s were made in the entire game.

Most Points by One Team in Regulation:

It’s hardly a surprise to see the 1990-91 Nuggets on mentioned on the down side of this list again. Under Paul Westhead, they adopted the run-and-gun offense that led to huge success for the coach at Loyola Marymount. It didn’t quite work out in the pros and the Nuggets became affectionately known as the “Enver Nuggets” because they didn’t have a “D.” They allowed a league-high 130.8 points per game in 1990-91.

Highest-Scoring Game of the 21st Century in Regulation:

You knew we had to get to these Houston Rockets eventually. Of Houston’s 103 field goal attempts on the night, 54 came from 3. James Harden finished with 59 points and Russell Westbrook put up a triple-double in the victory. Bradley Beal had 46 points for the Washington Wizards, while four scored in double figures off the bench.

Most Points by One Team in Regulation in the 21st Century:

Carmelo Anthony led a balanced attack with 26 points, while Allen Iverson added 24 points for a talented Nuggets team that would win 50 games. Marcus Camby finished with a 13-15-10 triple-double and Kenyon Martin scored 23 as Denver put up 48 points in the first quarter, 43 in the third and 41 in the fourth. A rookie named Kevin Durant had 23 points for the SuperSonics, who would move to Oklahoma City the following season.

The NBA record that will likely never be broken: Wilt’s 100-point game. Chamberlain shot 36 of 63 from the floor, 28 of 32 from the free-throw line and nabbed 25 rebounds in the Philadelphia Warriors’ 169-147 victory over the New York Knicks. Four of his teammates scored in double figures while three players dropped at least 30 points for the Knicks. We’ll remember this one forever.

Powered by a 33-point performance from Clyde Drexler, the Portland Trail Blazers knocked off the Phoenix Suns in a double-overtime thriller. Portland’s Terry Porter and Danny Ainge also went for 31 and 25, respectively. Kevin Johnson’s 35 points and 14 assists were not enough for the Suns, who fell behind 3-1 in the Western Conference semifinals before getting knocked out in Game 5.

Most Points by One Team:

Highest-Scoring Game of the 21st Century:

Most Points by One Team in the 21st Century:

George Gervin powered an offensive explosion from the Spurs, pouring in 42 points and grabbing 10 rebounds in a winning performance. Three of his teammates went for at least 20 points while Dan Issel dropped 28 for the Nuggets.

Seven years later, the Celtics put up 157 points in a 29-point victory over the Knicks. Kevin McHale had 31 points and Larry Bird finished with 15 points and 16 assists. Patrick Ewing’s 28 points weren’t enough for the Knicks, but New York would storm back and win the next three games to take the series.

Highest-Scoring Game of the 21st Century in Regulation:

Toronto stomped the Nets to complete a first-round sweep in the NBA’s Orlando bubble last season. Pascal Siakam had 20 points and Norman Powell finished with 29. The depleted Nets never really stood a chance in the series, though Caris LeVert did put up an impressive 35 points in the loss.

That was how perennial All-Star Larry Bird described MJ’s performance after he set the single-game playoff scoring record. If you didn’t know the 23-year-old Jordan before this masterpiece on the grandest stage against the Boston Celtics, you certainly knew him after. Although the Bulls lost Game 2 of this first-round series 135-131 in double overtime and were years away from winning their first title, Jordan’s gutsy play put them on the map. Elgin Baylor is the only other player to score more than 60 in a playoff game.