Decision 2021: How Should the Cubs Handle Their Big Three? | The Analyst 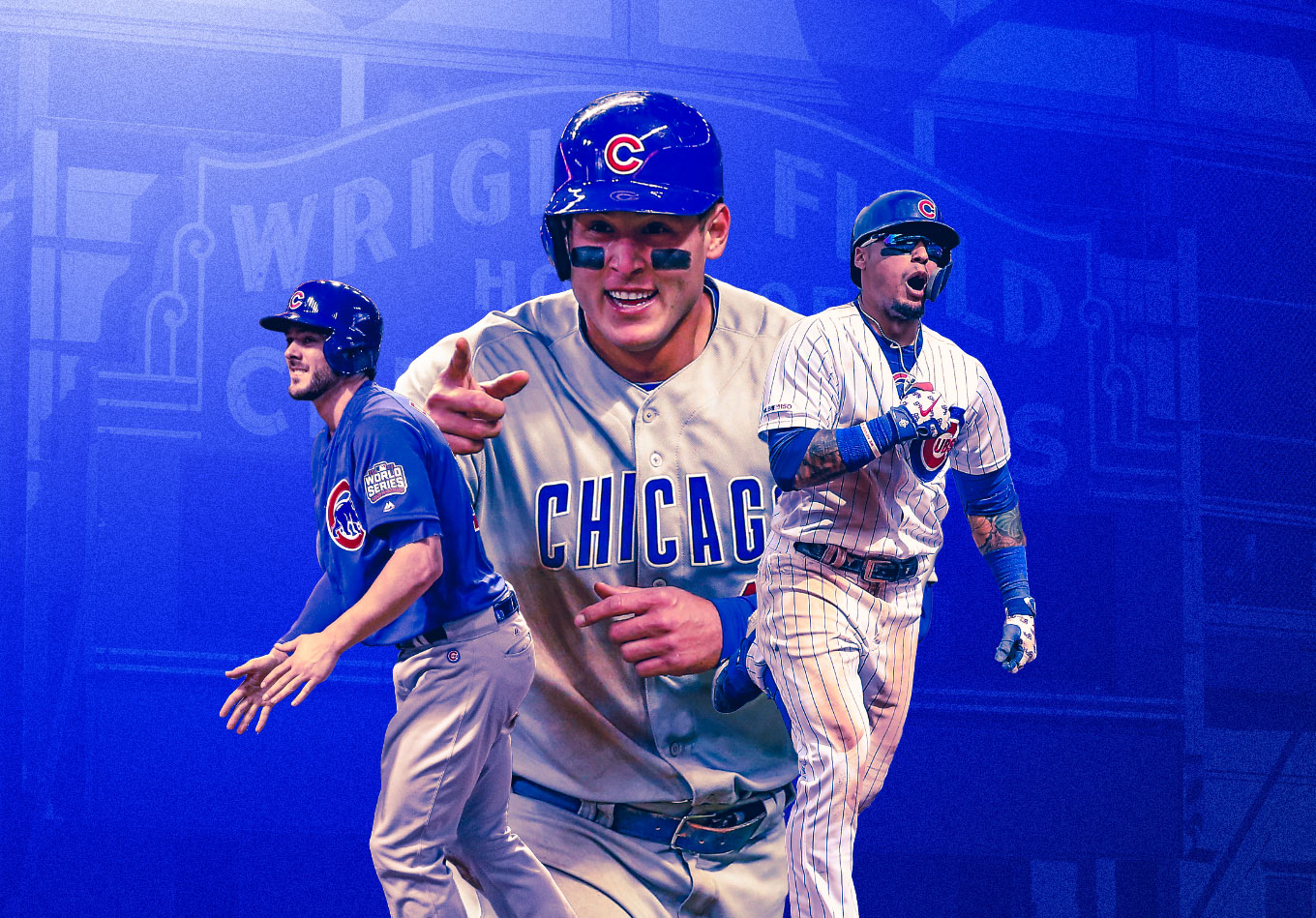 Decision 2021: How Should the Cubs Handle Their Big Three?

There was chatter about a dynasty.

It’s quite ironic, really. The Cubs were fresh off their first World Series title in 108 years in 2016. Jubilation. Euphoria. Bliss. Whichever word you want to use, Cubs fans were on top of the world. But some got greedy. Some started wondering just how many rings their team would win.

Three titles like the San Francisco Giants of the early 2010s? Possibly. Four titles in five years like Derek Jeter’s New York Yankees? Who was to say no. It actually made sense, at least on paper. The 2016 Cubs were much younger than the 2010 Giants and 1996 Yankees. Their youthful core of infielders looked destined for lasting greatness.

Anthony Rizzo was the fan-favorite face of the franchise. Javier Baez was the up-and-coming, exciting middle infielder. Kris Bryant was the National League MVP. Rizzo turned 27 that August and was the oldest of the three-man unit. Bryant (24) and Baez (23) were just getting started.

The next few years, though, were largely disappointing. The Cubs have since made just one NLCS appearance, lost seven of their last eight playoff games and missed the postseason altogether in 2019. Their superstar infielders didn’t necessarily regress – it was more so their front office had a tough time building around them.

All three will become free agents after this season (barring any midseason extensions) and management has some tough decisions to make. Rizzo, Baez and Bryant are still high-quality players despite struggling in 2020 – they’re just now a little bit older. And the dynamic has unquestionably changed. The direction of the franchise is uncertain. Do the Cubs want to rebuild or try to compete?

Whatever the answer might be, it’s still unlikely that the Cubs have or want to spend the money to bring all three back for 2022. Who should return and who’s most likely to? Time to investigate.

Rizzo is probably telling himself “hindsight is 20/20” right about now. The first baseman signed a 7-year, $41 million deal in 2013 that included two club options (the second one was picked up for this season).

Coming off a solid rookie campaign, Rizzo took the guaranteed financial security of an extension in exchange for less money and subjected himself to a few more years of team control. Looking back, the Cubs got an absolute bargain for their investment.

Rizzo has been extremely durable and consistent since the Cubs won it all in 2016, posting a raw value+ of 135 or higher in every year except the pandemic-shortened 2020 season. He averaged 29.8 home runs per season from 2014-19 (he was also on pace for a similar mark last year) and has won four Gold Gloves.

The only thing going against Rizzo is his age. He turns 32 this August and won’t get anywhere near the same amount of money he might have had he entered free agency in his 20s.

According to Spotrac, of the 13 active first basemen to sign a new deal at age 30 or older, only three received longer than a one-year deal: Carlos Santana (two years), Jose Abreu (three years) and Paul Goldschmidt (five years). Around the same caliber of player as prime-Votto, Goldschmidt signed a five-year, $130 million extension in 2019 when he was 31.

Since 2012, few first basemen age 30 or older have signed deals of at least five years. Goldy was the most recent one. Ryan Howard had a $125 million contract disaster (he never hit more than 30 home runs after his age-31 season). Yuli Gurriel has been fairly productive but he also signed for less than $50 million. Then there are Albert Pujols and Miguel Cabrera’s quarter-of-a-billion-dollar nightmare contracts.

Had Rizzo been a free agent at 28 or 29, he would have probably gotten at least $150 million. Now in his early 30s, Rizzo might not get an offer near $100 million. Reports say that’s what he’s looking for but the Cubs’ earlier proposal was for five years, $70 million.

Expect Rizzo to find some middle ground with Cubs management because it’s hard to imagine him suiting up for any other team. He likely wants to finish his career in the Friendly Confines and the front office hopes it can sign him to an underwhelming deal solely because of his advanced age.

Bryant has always had a rocky relationship with the Cubs organization. He previously filed a grievance against the club arguing he had his service time manipulated. If he had been called up one day earlier in 2015 then he could have entered free agency an entire year earlier.

Bryant reportedly turned down an extension of around $200 million in 2018 and seems to have been on the trade block for quite some time now.

The 29-year-old third baseman won his NL MVP in just his second season, hitting 39 homers and posting a 140 RV+. He came back down to earth the next three years, averaging an RV+ of 121 and never hitting more than 31 home runs while battling injuries. Bryant struggled mightily in 2020 (in 147 PA) but has been off to an excellent start in 2021. He ranks 14th in the majors with a 170 RV+ and 13th with a 205 BIP+ among those with at least 70 plate appearances.

This is a pivotal year for Bryant. If he performs poorly, it will complete a five-year downward trend since 2016. If he plays well and stays healthy, it’ll be clear that he has plenty of gas in the tank. It will also mean he’s likely to be too expensive for the Cubs to bring back and could garner a huge return from a midseason trade.

Anthony Rendon’s contract is probably the best indicator for how rich Bryant’s deal could be. Rendon signed for seven years and $245 million in 2019 (he was 29 at the time). He also had a far more consistent and impressive track record, improving his RV+ each year from 2016–19 (124 all the way up to 173).

David Wright is the only other 3B to sign for at least $100 million at 29 or older (2013 was the first year of his deal). Injuries largely derailed Wright’s career but other notable third basemen signed large deals in their 30s and played (for some, are playing) well afterward.

Josh Donaldson, Justin Turner and Adrian Beltre inked contracts for between $64 million (Turner) and $92 million (Donaldson). Donaldson signed his four-year deal in 2020 at age 34. The jury is still out on Mike Moustakas’ own $64 million deal signed before the 2020 season (he was 31).

Bryant does have the versatility to move to the outfield which is another point in his favor. Should he continue performing at an MVP-level this year, Bryant could get his $200 million offer. Just don’t expect the Cubs to pay up or for him to remain on the team for the full season.

Baez (now 28) is far more likely than Bryant to ink a long-term deal. The free-swinging shortstop’s RV+ is dragged down by a discipline+ mark that’s consistently ranked among the worst in baseball, but when he does makes contact, it’s a nightmare for his opposition.

Predicting how much Baez will sign for is a tough task. He won’t get anywhere near the $300-plus million that shortstops Francisco Lindor and Fernando Tatis Jr. received.

Fellow middle infielders Xander Bogaerts and Jose Altuve are better comparisons. They signed for $120 million and $151 million extensions, respectively, at around the same age that Baez is now.

Baez reportedly declined around a $160–$170 million deal last spring. After a rough 2020 campaign, he’ll need to continue his recent push to get an offer like that back on the table.

But there’s also a slew of free agent shortstops set to hit the market this offseason, including Corey Seager, Trevor Story and Carlos Correa. Baez probably wouldn’t be the headliner of that bunch if he makes it to the winter without a deal.

He’s likely more affordable than Bryant and doesn’t have a particularly precarious relationship with the organization. Look for Javy to get the new contract out of the two.

When Yu Darvish was dealt to the San Diego Padres this offseason, many thought the Cubs were entering a rebuilding stage or at least had no interest in paying top dollar for any player. Theo Epstein had recently stepped down as president of baseball operations and trading one of baseball’s best pitchers was certainly an interesting way to begin a new regime.

It’s understandable if the organization felt it needed to make a few tweaks but not initiate a complete reset. Perhaps it could rebuild on the fly while remaining competitive. After all, the club did win the NL Central last season despite down years from all three of its superstars.

But will that change if the Cubs don’t consider themselves real contenders as the trade deadline approaches? Will they choose to move some of their assets to stockpile minor league talent as they did in the years leading up to their 2016 title?

That remains to be seen, but right now it makes the most sense to rebuild the farm system (ranked 22nd by MLB.com) while still retaining two of their three superstars. The best, most logical and most cost-effective way to do that would be to send Bryant packing sooner rather than later now that he’s restored some of his value with a hot start to 2021.

Cubs fans might have jumped the gun following the 2016 World Series and underestimated just how hard it is to sustain excellence. In a league that’s getting younger and younger, the window for their talented core of infielders to bring home another title may have already passed.

It’s time for the front office to decide where the Cubbies go from here.