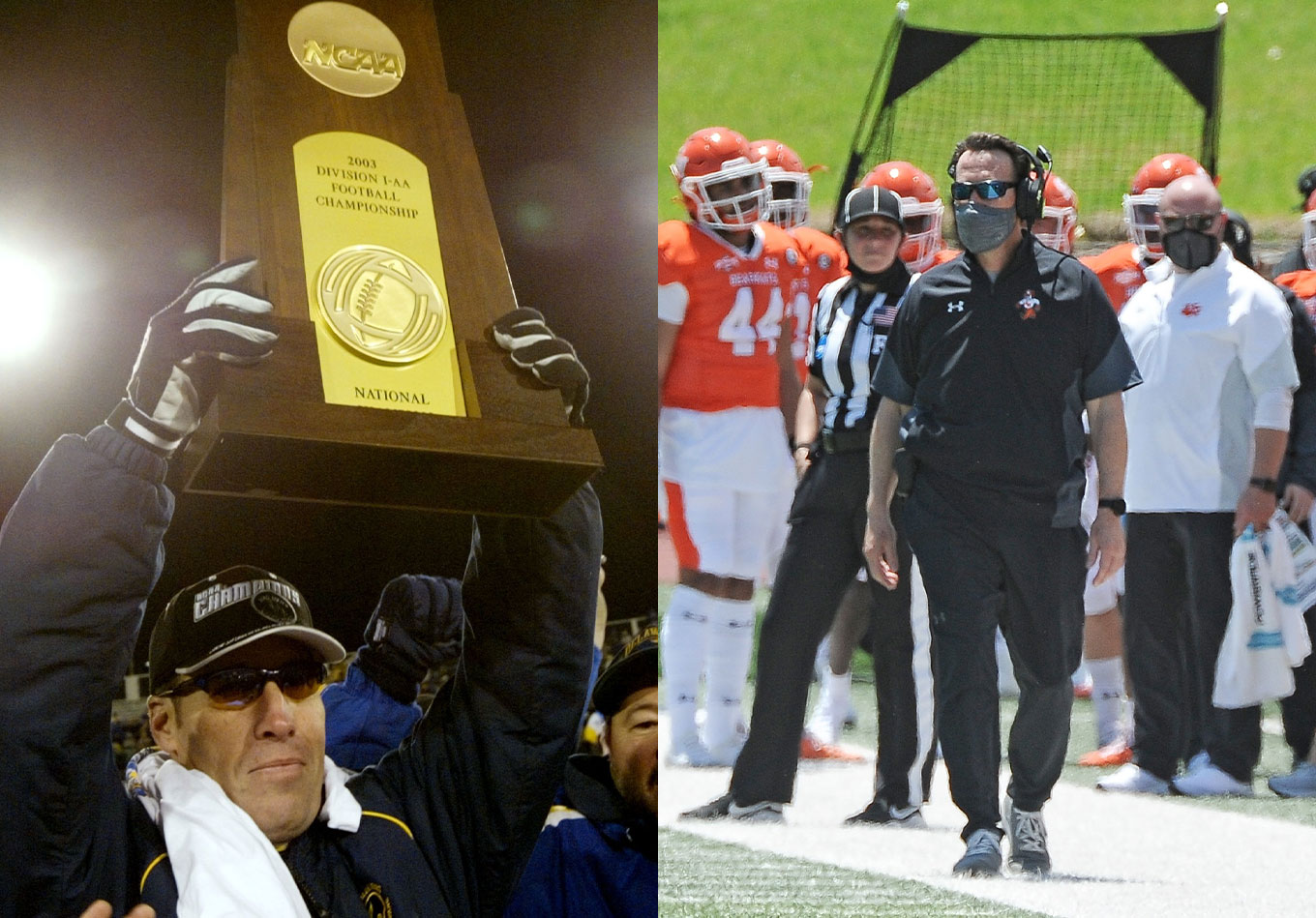 This season, K.C. Keeler has surpassed the likes of Hall-of-Famers Bo Schembechler and Woody Hayes on the list of all-time winningest college football coaches. This week, he’s being mentioned with another Hall-of-Famer, Jim Tressel, with whom he’s tied for the most coaching wins in NCAA Division I FCS postseason history.

“They’re icons. I don’t see myself that way,” said Keeler, Sam Houston’s seventh-year coach. “I see myself as a guy that’s been blessed to work at really good institutions that had commitments to be successful, and I surrounded myself with really good people.”

Keeler could set himself apart from all FCS coaches on Sunday. If Sam Houston (9-0) defeats South Dakota State (8-1) in the national championship game in Frisco, Texas, he would become the first coach to lead two different schools to the FCS title, adding to his 2003 season at Delaware.

“I’ve been honest, that’s the one thing missing off our (Sam Houston) resume. That’s the ultimate goal,” Keeler said. “And I have my ring on right now, from when I coached at Delaware. And I have one as a player at Delaware (1979 on the Division II level). And I tell them (his players) I wear it almost every single day because I know how hard it is to do this. I mean, this is hard. To at the end of the season, to be the last one standing, it’s really, really hard. So when you do it, you cherish it.”

If the Bearkats become the second Southland Conference program to win an FCS championship, they will have earned it in jaw-dropping fashion. They upset three-time defending champion North Dakota State in the quarterfinals and James Madison in the semifinals, two programs that eliminated the Bearkats five times in the playoffs while combining to capture the last nine FCS titles.

The triumvirate of elite opponents now shifts to South Dakota State, a 4½-point favorite and the No. 1 playoff seed from the Missouri Valley Football Conference, which Keeler recognizes as the strongest in the FCS. His Bearkats are the No. 2 seed.

“I thought the Southland was really good this year,” Keeler said. “We had a pretty good run, and now we’ve gotten up against these really, really challenging games, and our players have persevered. I’m hoping the perseverance that we’ve gone through has really kind of galvanized us, knowing that we’re going to go through it on Sunday.”

He’s the only coach to guide three different schools to NCAA championship games, part of 27 overall seasons in which he’s tied for the 37th-most wins at four-year schools at 242-95-1 (.717), including 68-22 at Sam Houston. His teams have combined for 16 postseason appearances and 10 conference championships, and he’s tied with Tressel with 23 FCS postseason wins, the most in history.

A positive players’ coach who wants his teams to manage the moment at hand and not dwell on negatives, Keeler is all but defined by Sam Houston’s most recent game. With his team trailing James Madison 24-3 at halftime last Saturday, he calmly talked during a halftime TV interview about not having a 21-point play yet believing in making a comeback seven points at a time. He then delivered the same thoughts to his team in the locker room.

Sam Houston took the lead for good on the final play of the third quarter and won 38-35.

“Seven points, seven points,” running back Ramon Jefferson looks back. “That just goes to show his character, and we just feed off of that.”

Keeler, the 2016 Eddie Robinson Award recipient as the FCS coach of the year, draws similar comparison between his 2003 Delaware squad and this year’s Bearkats. He felt his Blue Hens squad that finished 6-6 the year before in 2002 was hardened by five losses of four points or less and one more by 10. Sam Houston was 7-5 most recently in 2019, losing four times by four points or less and once by eight points. He sees similar talent in the offensive skills positions, although – shhhh, don’t tell his 2003 UD players – he gives an edge to his Sam Houston receivers unit.

“One thing that Coach Keeler always says, this program is a program that competes for a national championship,” Jefferson said. “Obviously, as a player that’s what you want to accomplish.”