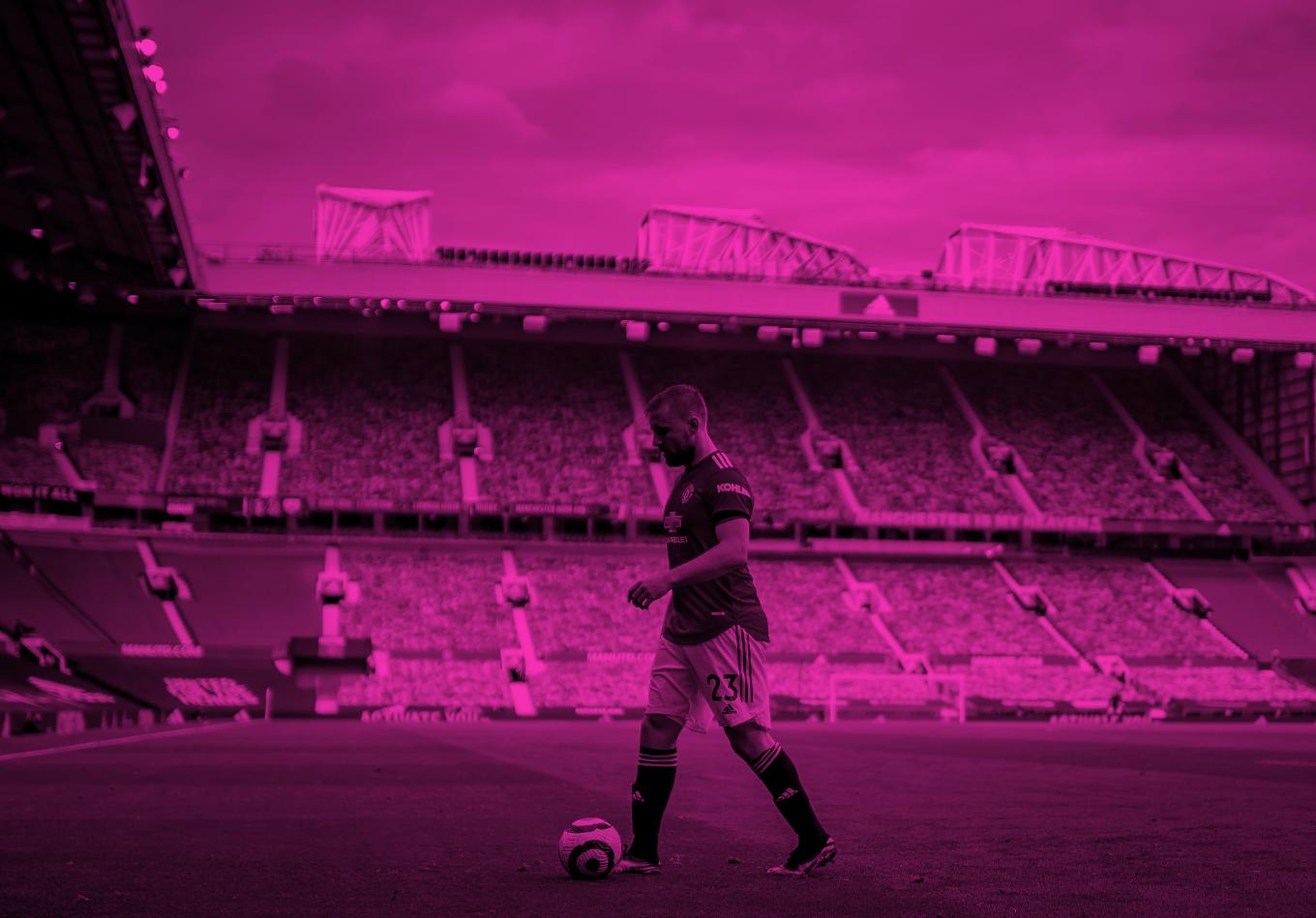 In the space of 11 months, two events in Luke Shaw’s personal and professional life transformed his career, at least in the opinion of him and Ole Gunnar Solskjaer. Firstly, in November 2019, Shaw became a father for the first time. Then, in October 2020, Manchester United spent £15.4m to bring Alex Telles from Porto to Manchester.

The obvious thing to point out is that both of these events could easily have affected Shaw’s career in a negative way. When interviewing then-Bournemouth striker Callum Wilson, he spoke at length about the difficulties of new parenthood for elite sportspeople. With quality of sleep inextricably linked to performance, having a new baby in the house can make things tough. You are loathed to let it impact upon your professional form but also don’t want to be considered a part-time parent and risk damaging your relationship with your partner and child. But Solskjaer believes becoming a dad turned Shaw into a man.

Alex Telles was never promised that he would be first choice at Old Trafford, but he did not arrive with the ambition to play second fiddle. Having lost his place to Brandon Williams for a period in 2019-20, Shaw must have considered Telles a threat. At Porto, Telles had demonstrated the attacking credentials that seemed to complement Aaron Wan Bissaka’s defensive strengths. Again, Shaw believes that the arrival of a readymade replacement has motivated him to perform. Out of potential adversity, a career is reborn.

Somewhere along the line, Shaw’s career had waned. The serious leg break he suffered in September 2015 didn’t just threaten the career of the then-most expensive teenager in world football. Doctors later explained to him that he had come close to losing his leg after the discovery of blood clots that required a second emergency operation.

That injury and subsequent extended period of rehabilitation ultimately put into doubt Shaw’s Manchester United future; his return to the team hardly helped. There were accusations of fitness problems and well-documented weight issues, but under Jose Mourinho the fabric of Shaw’s game was called into question. After a 1-1 draw with Everton in April 2017, Mourinho told reporters that Shaw needed to “grow up, mature and understand the game better”. The most infamous soundbite was that Manchester United’s £30m left back lacked “a footballing brain”. Shaw subsequently rejected a permanent move to Everton in 2018 as Mourinho looked to move him on.

Four years on, Shaw has transformed his career. Change came incrementally and not without further setback or criticism, but this season Shaw has arguably been Manchester United’s most consistent and best player, above even Bruno Fernandes. Therein lies one of the benefits of reaching the top at such a young age: At 25, Shaw has already had two half-careers.

The fitness has improved, of that there is no doubt. In January, Solskjaer was at pains to point out that Shaw is improving his distance covered and high-intensity sprinting statistics almost week on week. The player himself believes that the weight jibes were simply the result of a body shape that is different to the wiry, lean norm of elite footballers, but he looks different to the eye.

That increased stamina and speed provides the foundation for any full-back to attack, confident that they can use recovery sprints to get back into defensive position if the situation demands it. Shaw is certainly offering more than ever in the final third. Between 2015-16 and 2019-20, he never created a chance more often than one every 69 minutes over the course of a Premier League season; this season he’s created a chance every 36 minutes and has recorded 38% of his career Premier League assists in the last eight months. Create four more chances and he will have doubled his total from any other Premier League season.

Our open-play player sequence data records an individual’s involvement in moves that end in a shot. Shaw ranks fifth of all Premier League full-backs behind Trent Alexander-Arnold, Andrew Robertson, Leeds’ quasi-full-back-midfielder Stuart Dallas and Manchester City’s Joao Cancelo. This suggests that Shaw is operating in higher areas of the pitch than in previous seasons, as demonstrated in the graphic below.

In terms of shot-creating actions per 90 minutes, Shaw is behind only Bruno at Manchester United. He is completing more dribbles than at any point in his career and his also now his club’s designated corner taker. Only four players have delivered more long corners (into the box) than Shaw in the Premier League this season. Only two teams have created more shot actions from dead-ball situations than Manchester United (although this takes into account free-kicks and throw-ins as well as corners).

Shaw’s improvement as an attacking outlet is not proof purely of an individual refinement, but of his burgeoning relationship with Marcus Rashford. With Rashford now solely used as a left-sided forward in a 4-2-3-1, it provides Shaw with the perfect opportunity to attack in two distinct ways. When Rashford has possession, he can choose to either drift infield with the ball, allowing Shaw to overlap and cross the ball, or stay wide and let Shaw underlap with his run. That gives an opposition full-back a headache: does he go out to engage Rashford and risk leaving space in behind for Shaw, or sit off Rashford and give him the space to drive towards goal or pick a pass to Bruno?

Shaw is not merely a crossing full-back (he has only 80 open-play crosses compared to 168 and 149 from Alexander-Arnold and Robertson respectively); one of Manchester United’s signature moves is him underlapping and passing the ball back from close to the byline rather than crossing it into the box. That fits Manchester United’s profile when Edinson Cavani is not on the pitch. They lack a physical centre forward and so choose to work the ball to Bruno on the edge of the penalty area instead.

The sharp jump in Shaw’s attacking numbers are proof that he has risen into the role of creator, necessary due to Wan Bissaka’s less expansive style on the right, but most impressive is that it has come without any obvious decline in his defensive solidity. This is Shaw’s best season to date in terms of the number of times he has been dribbled past by an opponent (13 times, only one more than Wan Bissaka).

Shaw is not a tackling full-back (he has made just 40 this season, compared with Wan Bissaka’s 85). Rather than move forward to engage a wide forward or winger, Shaw prefers to tuck inside and manage the space, either to shuttle opponents infield where Scott McTominay and Fred lie waiting or to force a cross from a low-percentage area if the opponent chooses to attack down the flank. This is a deliberate strategy and clearly works; Manchester United have conceded only 18 goals from open play this season – set-piece defending has been the bigger problem.

Shaw’s career is proof of how certain patterns of form can quickly become self-fulfilling. The four years that began with a career-threatening leg break embedded a mental block during which Shaw was playing catch-up, exacerbated by Mourinho’s stinging criticism and his own imperfect fitness. At that point, Shaw conceded that he found it hard to even tread water at Manchester United; the best he could hope for was to be considered functional.

Now, the opposite. Shaw is enjoying his football, has the trust of his manager, teammates and supporters because he earned that trust. He is part of a team that dominates its attacks down the left flank and offers him license to play the type of key passes that inevitably catch the eye. With his fitness and condition now fully restored, he is able to surge forward knowing that he can get back into position or have a defensive-minded midfielder cover for him.

The last step is to become the clear first choice at international level again. Shaw earned six England caps before turning 21 but only three more in six subsequent years as Danny Rose, Ben Chilwell, Ashley Young, Fabian Delph, Ryan Bertrand, Aaron Cresswell and even Ryan Sessegnon jumped ahead of him in the queue.

But Shaw has peaked at the perfect time. Despite all the noise about England’s astounding crop of right-back options, Shaw has been the in-form English full-back this season. Without playing a single minute of England’s Euro 2020 qualification campaign, Shaw might well be Gareth Southgate’s first-choice left back this summer.