Title Hunting: Can the Bucks' Jrue Holiday Succeed in the Playoffs Where Eric Bledsoe Failed? | The Analyst 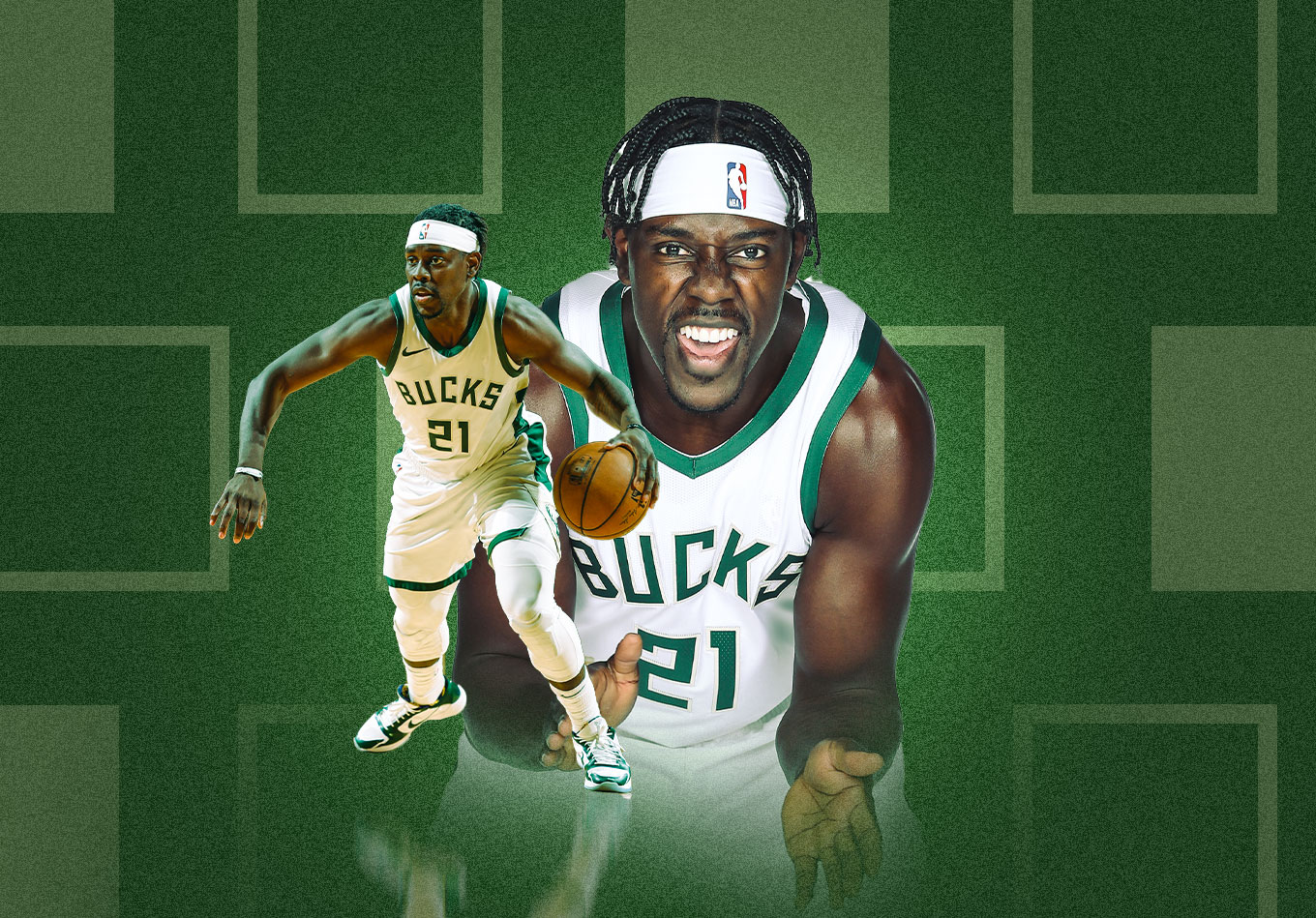 Title Hunting: Can the Bucks’ Jrue Holiday Succeed in the Playoffs Where Eric Bledsoe Failed?

For years, Jrue Holiday was a poster child of underrated vs. overrated squabbles.

Some thought he deserved more plaudits, his praises hushed while he was tucked away in New Orleans, either playing for a lottery team or concealed by Anthony Davis’ shadow of superstardom. Others thought his grandest proponents directed his praises too far, his weaknesses not scrutinized because of an absence of many high-leverage situations.

Now a vital member of the title-eyeing Milwaukee Bucks, surrounded by the most talent of his NBA tenure, Holiday has vindicated his ardent supporters. Averaging 17.7 points, 6.1 assists (2.2 turnovers), 4.5 rebounds and 1.6 steals on 59.2% true shooting (.503/.392/.787 split), he turned in arguably the best regular season of his career.

In conjunction with schematic modifications and offensive growth from Giannis Antetokounmpo, Holiday’s arrival and presence is a headlining basis as to why the Bucks should be much more self-assured about the regular season being more indicative of their playoff quality compared to past years.

Holiday’s Midwestern predecessor was Eric Bledsoe, who enjoyed a pair of notably impactful regular seasons in 2018-19 and 2019-20, helping guide Milwaukee to a pair of No. 1 seeds, but struggled mightily in each playoff defeat. As a small guard who relies on dribble penetration and a teetering jumper, Bledsoe could not convert from deep or live at the rim to the degree he did during regular seasons.

A proficient half-court offense from the Bucks required Bledsoe’s paint pressure and ability to drill open 3s. When he shot 24.0% from deep and posted a 48.9% true shooting across two postseason showings, especially with Antetokounmpo’s offensive shortcomings against Toronto (2019) and Miami (2020), the whole plan crumbled. In essence, their success was faultily tied to Bledsoe’s scoring efficiency and decision-making, both of which cratered at inopportune junctures.

The issues primarily stemmed from Bledsoe’s lack of offensive malleability, slow release as a shooter that caused him to reconsider options – he needs to be a quick decision-maker to thrive. Holiday represents a substantial upgrade in all three facets, while also similarly badgering point-of-attack defenders with significantly more positional versatility.

The biggest discrepancy between these two guards is the self-creation, particularly their divergent intermediate games. At 6-foot-1 and short on Holiday’s blend of ball control and craft as a driver, Bledsoe often only had one speed inside the arc: a finish at the rim with strength and contortion. He only shot a combined 36.4% from midrange in 2018-19 and 2019-20. When the basket was walled off, Bledsoe did not have a counter and his dribble-drive game faltered.

The 6-foot-3 Holiday, meanwhile, shot 46.2% from midrange this season, fires from an array of atypical release points and body angles, has better size and shields defenders from disrupting his handle. He’s much more adept at wiggling into creases of the defense, typically somewhere between the foul line and rim, and lofting in pretty jumpers (see video below).

His frame isn’t the only way he leverages openings. He’ll bust out body or shot fakes and scoot into narrow windows with up-and-unders. The guile and comfort to score from midrange are sizable improvements over Bledsoe and provide the Bucks some balance in their shot profile, making it harder for opponents to eliminate their preferred means of scoring.

Holiday also frequents the Moreyball zones. He shot 61.9% at the rim and 39.2% beyond the arc. He’s excelling as both a pull-up and spot-up shooter from deep as well. Off the catch, he’s converting 37.9% of his triples, shrewd about spacing to gaps along the perimeter for open looks and functioning as ancillary scorer alongside Antetokounmpo and Khris Middleton. Off the dribble, he’s splashing 40.2% of his 3s.

He loves teeing up rhythmic step-back jumpers, particularly when he identifies a mismatch. This is the sort of shot-making prowess Bledsoe cannot replicate and did not produce for Milwaukee. Holiday’s midrange game is merely one example of the ways he diversifies the action offensively. His long-range bombs are another. Among 61 players to hoist at least 150 pull-up 3s this season, Holiday’s 40.2% clip ranked eighth. It’s a delightful weapon for him and his new employer:

Although both Bledsoe and Holiday are capable finishers inside, there is calculation and command prevalent in Holiday’s style that’s absent from Bledsoe’s. Whereas Bledsoe generally fails to operate with any gear-shifters – once he attacks, something, he or the ball, is going toward the rim – Holiday is methodical and tedious.

On rim runs (like those below), he leaves the door ajar for other options, such as a midrange jumper, something Bledsoe rarely does. Holiday may drive, but the possession’s outcome is not predetermined. He’s fearless, controllably plowing into and muscling through rim protectors, scores at the tin with either hand and is shifty enough to slither around defenders when strength isn’t the optimal process.

Just as his eyes grow wide and the thought of a step-back 3 enters his brain when a big is switched onto him, Holiday will swiftly bully smaller defenders down low with his post game. Similar to his driving technique, he is careful and patient in the post to avoid offensive fouls (he only committed six this season).

He’ll swivel, pivot and politely bludgeon to the bucket, duping defenders with up-fakes and spins while carving out the requisite real estate to score. In addition to the midrange arsenal, Holiday’s back-to-the-basket aptitude (examples below) further differentiates him from Bledsoe and is another reason why there should be much less hand-wringing about the Bucks’ offense performing well deep into the playoffs.

The tenets of Holiday’s slashing profile, strength, deliberation and savvy, also enable him to inhabit the lane and collapse defenses as a facilitator. He’s a much more prudent decision-maker (2.8 assist-to-turnover ratio) than Bledsoe (2.4) and touts the size and discipline to aptly capitalize on the help he elicits inside.

He’s hardly forced to play at an unfamiliar tempo, and though he hurls some complex passes, the majority of his reads are derived from the defensive rotations he spurs. His proclivity for paint touches and three-level scoring chops mean defenses constantly have to account for him. As a result, passing outlets are available to Holiday as he lures defenders away from their assignments with the stress he imposes upon them. From there, the path to efficient shots is fairly standard (at least for him).

Holiday does not need to spearhead the offense to maximize his impact, nor do the Bucks ask him to. Beyond his spot-up shooting and relocation wit, he’s a smart cutter, both from the wings and along the baseline. His off-ball equity is a massive advantage over Bledsoe. Milwaukee has reshaped its offense this season, going from a four-out structure around Giannis to three-out and placing one guy in the dunker spot.

Often, Holiday is stationed here as opposed to a big because it mitigates the impact of rim protection on Antetokounmpo’s drives (or whoever else) if a guard is the one trying to send help. He floats along the baseline, peaking through gaps in the defense at the proper time and either calling his own number or serving as a play connector to invent more passing angles.

This is not entirely about what Holiday himself delivers, but about how his advent has helped facilitate tinkering of the offense. Four guys regularly spaced around the perimeter seems ideal in theory, but engenders longer, sometimes more difficult passing routes. Holiday slotting into the dunker spot adds newfound optionality each possession (see below).

While largely a consequential lift offensively, Holiday, with better size and discretion than Bledsoe, presents more defensively, too. Both guards are excellent navigating screens (well, Bledsoe was in Milwaukee, less so in New Orleans so far), but Holiday has the build to fluster a wider array of assignments, whether it’s in pick-and-rolls, isolations or in the post.

As a ball-screen defender, he’s superb at implementing Ice or Push coverage, where the objective is to eliminate the middle and influence the offensive player away from the pick. His size empowers him to neutralize screens, yet he also does a stellar job of not conceding any air space between him and a ball-handler when fighting over screens. This prevents any beneficial separation from being established.

When his man does find an edge, he’ll succinctly peel to the roller and complicate drop-off feeds. Basketball is about crafting advantages. Holiday disallows them. Size, strength and technique prop him up as a preeminent pick-and-roll defender on the perimeter. Some of these clips are downright cruel (particularly the one against Malcolm Brogdon).

Some of the same traits that aid Holiday in ball-screen gambits extend to his isolation exploits. He anticipates player movements to cut off paths and unsettle the opposition. He wields elite body control and isn’t prone to instinctively relying on his hands while defending drives. They’re both contributing reasons he seldom fouls, averaging a career-low 2.4 fouls per 100 possessions this season.

Because Holiday has the functional strength of a wing rather than a 6-foot-3 guard and is a fluid lateral mover, he assumes a gamut of multifaceted assignments, ranging from Luka Doncic to Russell Westbrook to Trae Young. He’s also seemingly perfected absorbing contact and maintaining balance to swipe steals. It’s essentially his patented defensive play: baiting opponents into initiating contact, staying upright and jarring the ball loose for turnovers without fouling. As seen below, he brandishes distinguished dexterity and doesn’t compromise defensive positioning when doing so.

Burning Holiday off the dribble or via the pick-and-roll is rather pressing, yet seeking him out down low isn’t a fruitful endeavor either. He’s an absolute tank on the block, refusing to sacrifice positioning and welcoming contact as another chance to pilfer takeaways. Bigs and burly wings run into trouble.

His ability to rotate across archetypes is one reason Milwaukee has embraced a more switch-friendly defensive scheme this season. The following clips are examples of how aiming to punish him in the post is unlikely to yield favorable dividends. Most guys fail to dislodge him or develop the rhythm they desire for a patterned shot attempt.

Many of Bledsoe’s and Holiday’s skills overlap. In past years, writing a similar piece outlining why Bledsoe is a foundational player of Milwaukee’s success would’ve been applicable – at least during the regular season. But while the regular season tends to be about playing to your strengths, the playoffs are about masking your weaknesses.

Now, Holiday heads into the postseason flanked by the most gifted cast of his career. There are far fewer reasons to believe his impact will drop precipitously while filling the combo guard role for the Bucks, who should feel quite confident in their top-five offense continuing to hum. Whether that’s enough to genuinely compete for a title (they’re at a bit of a talent disadvantage compared to some of the top dogs and their switching scheme defensively could use more refinement) remains a question.

But everything Holiday brings and the manner in which he brings it means this team has a gear it previously lacked. Bledsoe was a good player during his Milwaukee tenure whose holes severely diminished the scope of his positive imprint when it mattered most. Holiday is a very good player without those overt holes.

If the Bucks’ season ends differently this year, Holiday will be a leading reason why.