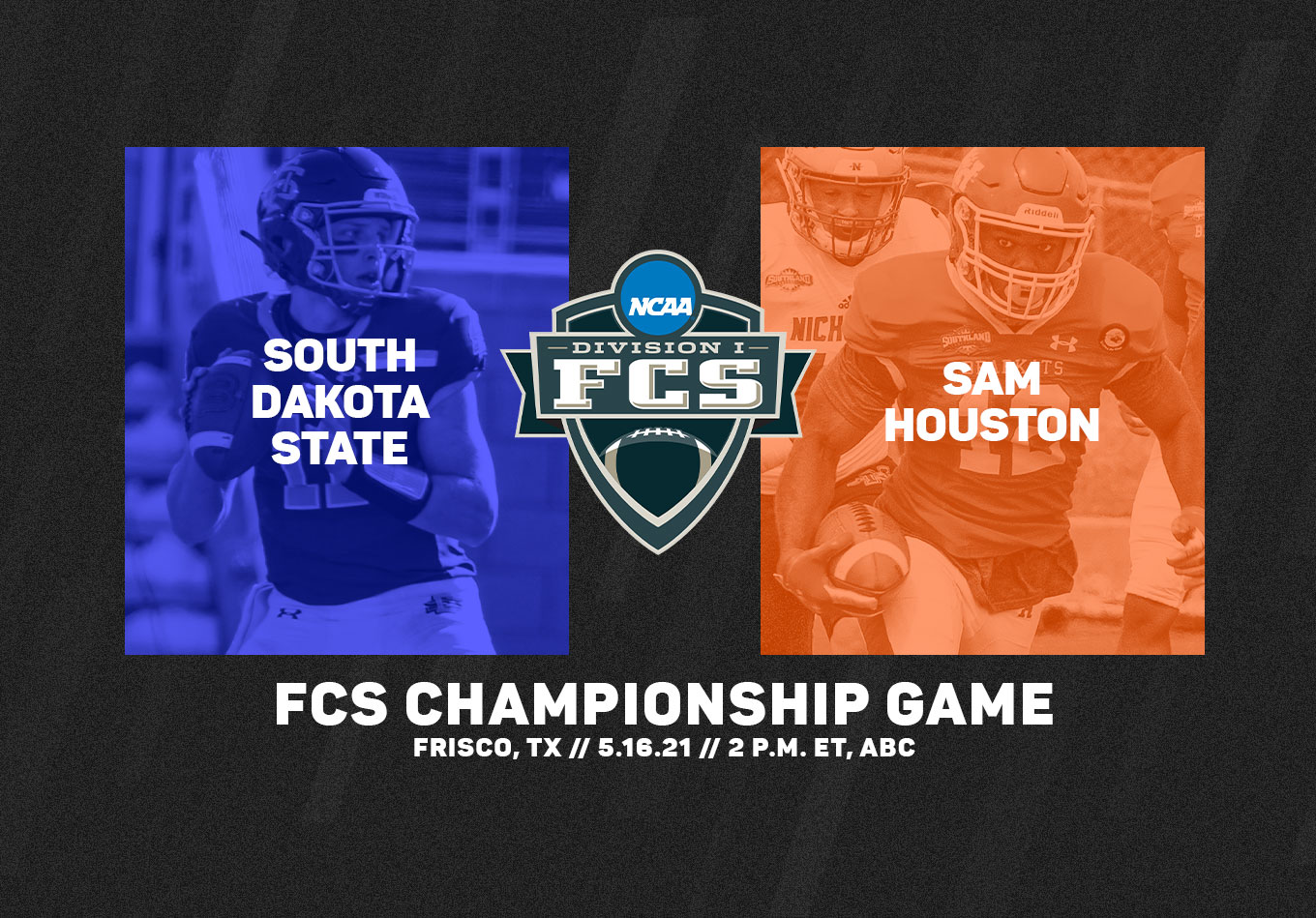 A first-time FCS champion will be crowned on Sunday when South Dakota State and Sam Houston meet in the title game that caps the 2020-21 season.

The Background – South Dakota State is making its ninth straight and 10th overall FCS playoff appearance, reaching the final for the first time with an 11-9 all-time playoff record. Sam Houston is 22-11 over 12 appearances in the FCS playoffs, losing to North Dakota State in the 2011 and ’12 championship games. With seven straight victories, the top-seeded Jackrabbits have matched their 2016 and ’17 squads for the longest winning streak in their Division I era (since 2014). With 10 straight wins since their final game in 2019, the Bearkats have seven streaks of at least six consecutive victories since 2010. Both teams are battle-tested: SDSU, which earned the Missouri Valley Football Conference’s automatic bid after earning a share of the title, are 5-1 against nationally ranked opponents; Southland champ Sam Houston is 6-0 in such games.

South Dakota State – The Jackrabbits, roughly 5 1/2-point favorites, are flat-out physically punishing with their run game and defense. They average six yards a carry (No. 2 in the FCS) and 230.9 rushing yards per game (No. 7), and are the only FCS team with three players over 500 rushing yards – Strong, Gronowski and freshman RB Isaiah Davis, who’s averaged 7.8 yards while rushing for 640 yards and seven TDs. Gronowski, a true freshman, has accounted for three touchdowns (whether pass, run or reception) in each of the squad’s three playoff wins. The offensive line, anchored by RT Garret Greenfield, has allowed 10 sacks, including zero in five different games. The big men’s work gives Gronowski the time to locate twin wide receivers Jaxon and Jadon Janke downfield (11 combined TDs). Perhaps most telling with the defense is it has allowed only a field goal in three of the last five games (twice in the playoffs). Overall, the Jackrabbits are surrendering 14.1 points per game, which is second-best among FCS teams that didn’t opt out of a spring conference schedule. DE Reece Winkelman is coming off a career game (8 tackles, 3.5 TFL, 2.5 sacks) in a semifinal round rout of Delaware. LBs Backhaus (69), Adam Bock (66) and Preston Tetzlaff (64) rank 1-2-3 on the team in tackles, while FS Josh Manchigiah has four of the defense’s 12 interceptions. On special teams, SDSU has blocked four kicks, but allowed opponents to block three. Cole Frahm is 13 of 18 on field goal attempts, with a long of 52; punter Ben Dinkel averages 41.3 yards.

Sam Houston – Keeler led Delaware to the 2003 national championship, and seeks to become the first coach to guide two different programs to FCS titles. Long an offensive juggernaut, the Bearkats have been even better on defense over the last two seasons. It starts with a D-line that has been all but impossible for opponents, featuring DEs Kay and Jevon Leon and DTs Joseph Wallace, Trace Mascorro and Scean Mustin. Opponents are averaging just 2.2 yards per carry (second-lowest among FCS teams that played more than one game), and the Bearkats have lived in opposing backfields, totaling 95 tackles for 373 yards in losses (37 are sacks). CB Zyon McCollum (10 career INTs) has been an anchor in the secondary for a long time and an improved linebackers unit has been an overlooked key defensively. The offense remains explosive, producing 28 of the team’s 34 plays of at least 30 yards (21 pass, seven rush). Ezzard is the gamebreaker, averaging 22.2 yards per touch via a run, reception or return, and he turned around the semifinal against James Madison with a 69-yard TD catch and an 80-yard punt return score in the third quarter. Schmid also starred with three overall TDs (two run, one pass), but he’s found playoff defenses to be tough, averaging 192.7 passing yards per game after it was 330.2 in the regular season. WR Cody Chrest leads the team with 40 receptions and Ife Adey is a downfield threat at 20.6 yards per catch. Ramon Jefferson (656 yards, seven TDs) leads the team in rushing, while fellow RB Noah Smith (27 receptions, 4 TDs) is a pass-catching threat. The kicking is strong with Seth Morgan 11 of 13 on field goals (a long of 44 yards) and Matt McRobert averaging 43.4 yards on 139 career punts.

Prediction – It’s easy to feel these two programs have been the most deserving of winning their first FCS title over the last decade. South Dakota State 28, Sam Houston 20