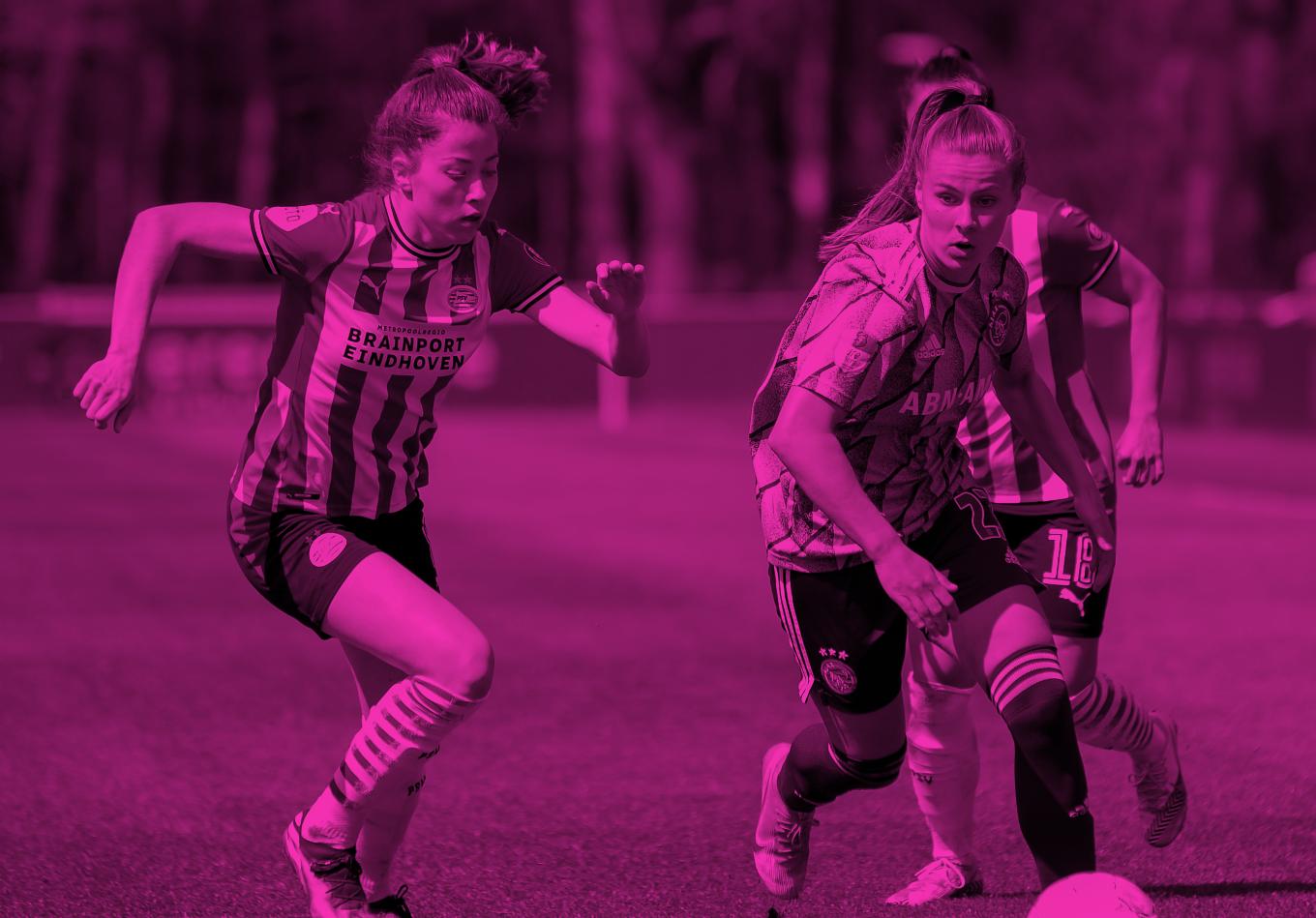 All to Play For: The Vrouwen Eredivisie Race

With the regular league campaign concluded, three teams are favourites to battle it out for the title in the Vrouwen Eredivisie. Can free scoring FC Twente retain the crown? Will Joëlle Smits depart PSV for Wolfsburg as a title-winner? Can Ajax’s sturdy defence carry their title bid over the line? We look at some of the defining factors for the favourites in the Championship play-offs.

FC Twente’s lead at the top of the table is mainly a product of their incredible goal tally. Having scored 13 goals more than any other side, it would suggest that they are the leading attacking side in the competition. However, the underlying numbers reveal that their goal tally might not be a true reflection of the threat they pose going forward.

So far in 2020-21, they have created chances accumulating an expected goals total of 27.5 – a huge difference compared to their true goal tally (46). This positive 18.5 gap between their xG total and goals is bigger than any other side in the division. True, this could be down to the finishing ability of their players being well above what we’d expect of the average player, but there is a suggestion that this is unsustainable as we move into the next stage of the Vrouwen Eredivisie.

Part of this overperformance can be explained by five own goals being scored in favour of Twente, nearly as many as every other team in the competition combined (6). But own goals aren’t the only reason, as the Tukkers possess an enviable attacking trio.

Renate Jansen, Fenna Kalma and Anna Lena Stolze have either scored or assisted 34 of FC Twente’s goals this season. All have been involved in at least 10 league goals in 2020-21, with the only other player in the competition to replicate this being Joëlle Smits of PSV.

Jansen is leading the MVP race this season with 19 goal involvements, but question marks remain on whether she can keep up her astonishing overperformance of xG, as her 10 goals have come from shots totalling just 3.3 xG.

Jansen is the creative star for Twente. She’s created the most goalscoring chances of any player both overall (37) and from open play (29), while she also has the highest expected assists total (3.4).

Much of Jansen’s threat comes from her ability to run with the ball at her feet. No player has been involved in as many goals following a ball carry in 2020-21 (7), with four goals and three assists, while nobody has created more goalscoring chances in this manner (9).

The key to any title challenge by PSV this season is undoubtedly striker Joëlle Smits.

Smits is the top scorer in the Vrouwen Eredivisie in 2020-21 with 14 goals and has already agreed a transfer to German giants Wolfsburg in the summer – the first transfer to involve a fee for PSV in their history.

The 21-year-old has converted an impressive 24% of her non-penalty shots and leads the way in the quality of shooting opportunities, averaging 0.92 xG per 90 from non-penalty shots. To compare this to the leading Dutch star in Women’s football, Vivianne Miedema has scored 18.9% of shots in the English Women’s Super League so far this season, with a non-penalty xG per 90 of 0.84.

With 11% of her total touches being shots and an astonishing 19.4% of touches coming in the opposition box, both league-highs, no player poses a bigger threat to opposition defences. It looks like the Dutch could have another superstar striker to play alongside Miedema.

So far this season, no team won more points in games between the championship contestants than Ajax (12).

The success of Ajax is built on a possession-based system coupled with some intense pressing. No team has as much of the ball as Ajax this season (62.1%) and no team chases possession as aggressively as the Amsterdammers when the opposition have the ball.

Looking at Passes per Defensive Action (PPDA), a metric to determine how aggressive a team is pressing its opponent, Ajax allow their opponents a league-low 6.6 passes on average before making a defensive action.

The dominant style of play led to a league-high of 228 high turnovers – possession won 40 metres from the opposition’s goal – with three of these leading to a goal.

The embodiment of Ajax’ playing style can be found in Victoria Pelova. The Dutch international midfielder ranks fourth for touches in the league this season (1,058), has won possession both overall (119) and in the final third (28) more often than any other player.

The Vrouwen Eredivisie Championship play-offs begin on April 30. With the top three level on points, can Smits fire PSV to their first-ever title before her move to Germany or will Ajax and FC Twente fight it out to collect their third title in the last six years? It’s all to play for.