Chasing Perfection: Juventus Women Are Close to a 100% Season 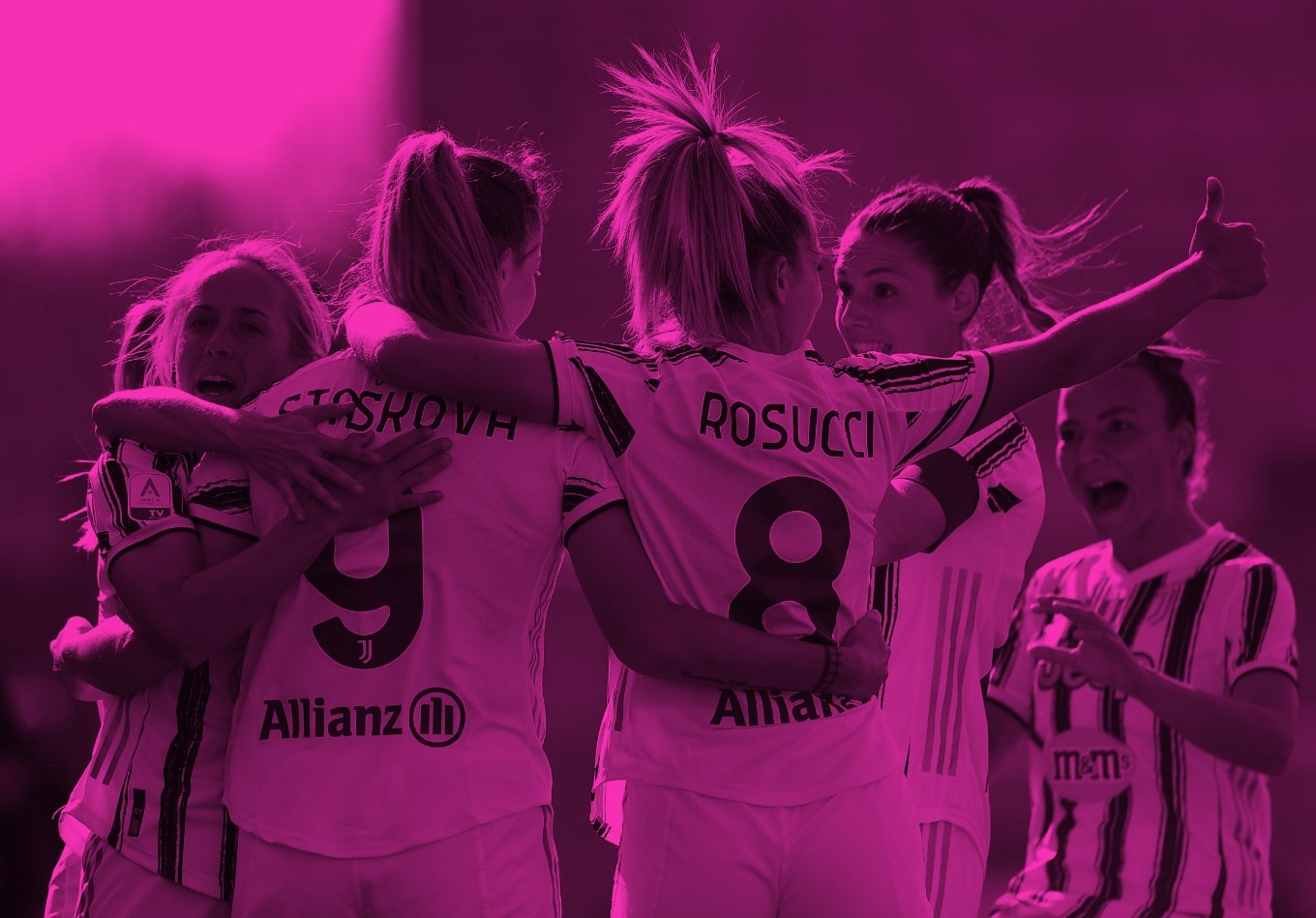 Since creating their women’s team less than four years ago, Juventus have gone on to dominate domestic top-flight Italian football under the leadership of Rita Guarino. Whilst they are 10 points away from securing a fourth Scudetto in four seasons, another unique achievement is also within their grasp: a 100% winning record.

What is the ultimate achievement for a team going into a league season? As supporters of the Arsenal men’s team will attest, finishing a campaign unbeaten can elevate a collective squad into the pantheon of club legends.

But whilst finishing a league season undefeated is undoubtedly a fine achievement, it is more common than you may imagine. Since 2009-10, there have been 18 instances in men’s football where top-flight European teams, from Juventus in Serie A through to Lincoln Red Imps in Gibraltar, have achieved the feat. Rangers too are on the verge of doing the same thing this season in Scotland. But we can go one step further and look at how many teams have achieved what some may consider to be the near impossible: finishing the season with a 100% winning record.

As you would expect, this is much rarer. It hasn’t been done in a men’s top-flight competition in over 75 years, but it has occurred in the women’s game a few times during the past three decades, including twice in England – first by Doncaster Belles in 1991-92 and then more recently by Arsenal in 2006-07, the season when they won all six trophies they entered, including the UEFA Women’s Cup.

One country where this accomplishment hasn’t yet been achieved since the current women’s top-flight was unified into a single competition in the 1970s is Italy. But that may be about to change.

With only five matchdays of the 2020-21 league season remaining, Juventus are within touching distance of achieving perfection. Their current record stands at played 17, won 17, and a plus-48 goal difference that’s 21 greater than their nearest rivals, Milan. They are one of three teams across the leading European women’s leagues who currently boast a 100% domestic league record, together with Barcelona and Bayern Munich.

Rita Guarino’s side are seeking a fourth successive domestic title since being formed in 2017 and whilst elimination from the Champions League to Lyon and defeat in the first leg of their Coppa Italia semi-final to Roma mean that they cannot boast a perfect record in all competitions, they remain on the verge of a remarkable achievement which would guarantee their place amongst the all-time great teams in Italian football.

Let’s take a look at some of the key factors and on-field personnel behind their successful season so far.

Defending From the Front

At the heart of many a great Italian team is a strong, robust defence, and this Juventus team is no different. After coming from behind to defeat Empoli 4-3 on Matchday 2, they have conceded just six goals in the 15 matches since, recording nine clean sheets in the process.

This solidity is reflected in their expected goals conceded for the season. Juve’s output of 0.69 xG conceded per 90 is by far the lowest in Serie A and the attempts on target they are conceding is also the lowest in the competition, at 2.4 per 90.

This highlights the difficulty opposition teams have found in getting into good shooting locations inside the box this season. The league leaders have conceded just 65 shots inside the box, fewer than 50% of the total collective goal attempts by their opponents. No other team in Serie A has conceded a lower proportion of their total shots from inside the box, as opposing teams have been forced into speculative attempts from distance.

One of the reasons for the opposition’s inability to get into good positions in advanced areas has been Juve’s ability to win the ball back in advanced areas of the pitch, a trait shared by their title rivals Milan. The central midfield duo of Martina Rosucci and Sofie Junge Pedersen both rank in the league’s top 10 for interceptions and tackles in the attacking third this season – with Rosucci recording a tackle success rate of 70% and Pedersen 66.7%.

In total, Juve have forced 227 high turnovers this campaign – categorised as turnovers occurring within 40 metres of the opposition goal – a number bettered only by Milan. These turnovers have also resulted in 40 shots and six goals for the league leaders.

A Set Piece and Aerial Threat

More than one in five of Juventus’ attempts have come from headers this season, which is reflective of their tendency to deliver the ball into the box from wide areas.

Cristiana Girelli, operating as the centre forward in Guarino’s preferred 4-3-3 shape, has netted 20 goals so far, including seven penalties, making her Serie A’s leading scorer. Five of her 13 non-penalty goals have come from headers, more than any other player.

Juve are averaging 16.8 crosses per 90 from open play, Serie A’s highest output, from which they have scored seven times. They have also generated 27% of their total xG output from corners and indirect free kicks, scoring 14 goals in the process – nearly double the number of the next best team, Fiorentina.

With her left-footed delivery, Valentina Cernoia has created 17 chances in total from corners and free kicks for Juve this season. Whilst her set-piece assist count of three is surpassed by Fiorentina’s Tatiana Bonetti, the quality of chances she has created, based on her expected assists per 90 (0.15), is the best of any player in the Italian top flight.

Big Game Players Standing up to Be Counted

To win titles, a team needs to have players who consistently deliver in matches against the other leading teams in the competition.

Girelli is one such player. She displayed great composure to score the winning penalty against Empoli deep into injury time earlier in the season. It was one of eight goals she has scored in games against teams in the league’s top six (Empoli, Milan, Sassuolo, Roma and Fiorentina). The 30-year-old forward has also been ably supported in these matches by wingers Lina Hurtig and Barbara Bonansea, who have both also contributed four goals apiece.

Operating predominantly on the right wing, Bonansea’s all-round play has been a key factor in Juve’s success against their rivals. Of her six open-play assists this season, five have come in matches against Milan, Empoli and Fiorentina. And of the players to have appeared in matches involving teams sitting in the top half of the league, she ranks first for assists (five), first for expected assists (1.85) and joint-first for chances created (14).

As illustrated by the graphic below, she has been particularly strong at playing in teammates from deeper central locations, as well as squaring the ball from wide areas when inside the box. Her creativity and supporting goal threat will be crucial to Juve as they approach their run-in.

In their remaining five games, Juve have to play three teams in the bottom half of the league, as well as away matches against fourth-placed Roma and third-placed Sassuolo, who they play this weekend.

Sassuolo are another team in a rich vein of form, coming off the back of five successive league wins in which they have scored 10 goals and conceded only once.

Their squad boasts some of Serie A’s most exciting young talent, including 16-year-old Maltese forward Haley Bugeja, who has scored eight times in the league, including two in her last two appearances. They’ve also been boosted by the return of the deep-lying Czech international midfielder, Kamila Dubcová, who despite missing recent games against Fiorentina and Napoli, has contributed nearly one in four of all Sassuolo’s chances this season. No player in the Italian top flight has created more chances than the 22-year-old’s campaign tally of 44.

Dubcová is also her side’s joint-leading scorer with nine, alongside forward Valeria Pirone. As well as her goals, Pirone has also contributed six assists in 2020-21 and the Juve back line will want to keep both players quiet as they look to preserve their league record.

On paper at least, Sunday’s clash represents Juventus’ toughest remaining league assignment between now and the end of the season. If they can come through it, they will have taken another significant step towards a unique achievement as they look to further cement their place in modern history as the dominant force in Italian top-flight women’s football.