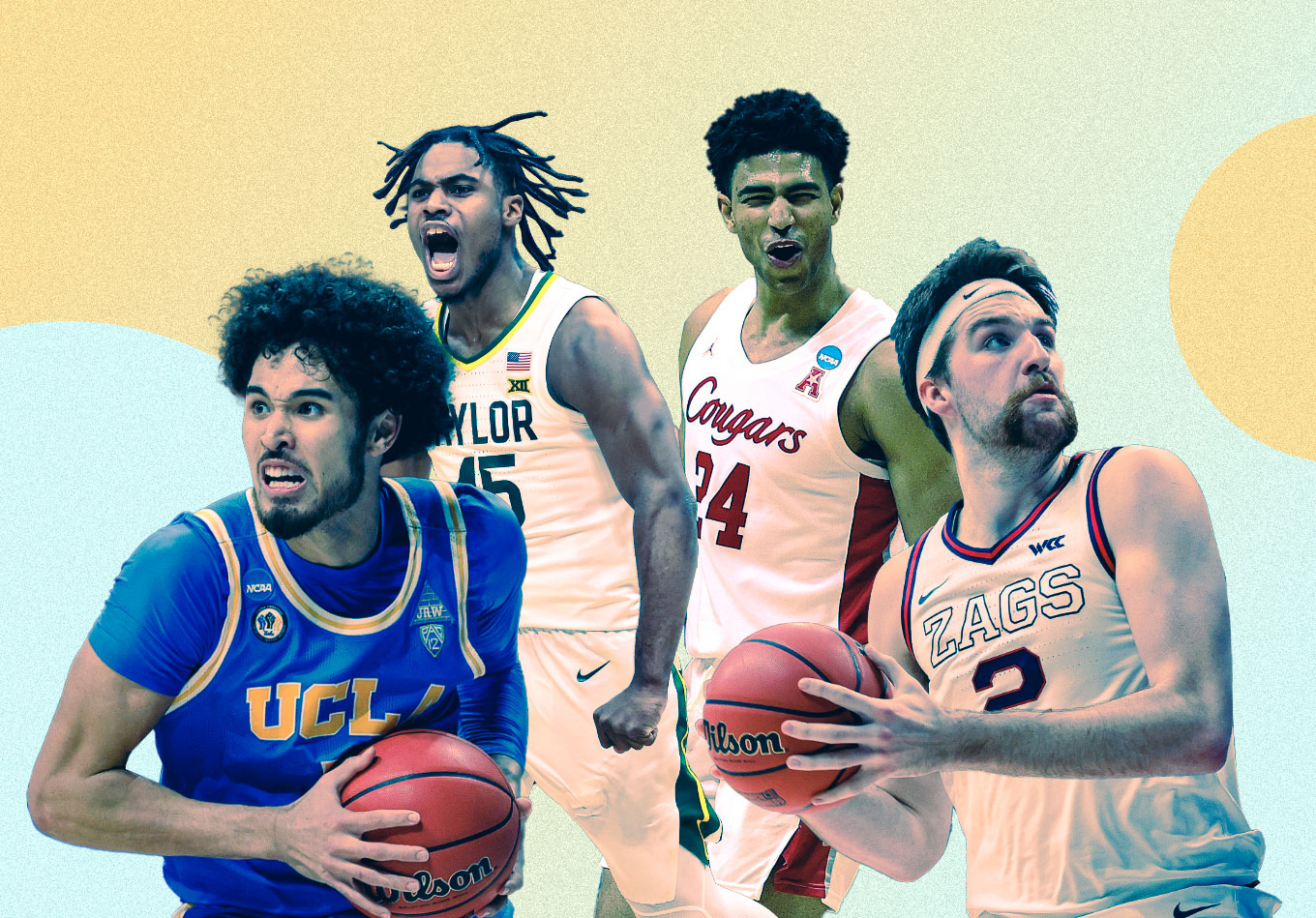 It’s a tale as old as time in the NCAA Tournament: The No. 1 seed that’s the favorite to cut down the nets and one of the true powerhouse programs in college hoops facing the plucky underdog that snuck into the Big Dance and has dreams of slaying Goliath.

David bringing 11 national titles into the ring? That’s a new one.

It’s hard to pinpoint an exact moment when Gonzaga shed its title of perennial Cinderella – we’re pretty sure Adam Morrison was involved – but with a top seed for the third time in the last four iterations of March Madness, there’s no doubt who the sport’s biggest heavyweight is right now.

The pride of Spokane may not be a true blue blood, but after watching the Bulldogs play for the last five months, it’s fair to ask: Do these guys even bleed?

Maybe someday down the road, if Mark Few’s club leaves Indianapolis as the first undefeated team since Indiana in 1975-76, we’ll get the Snyder Cut of Gonzaga’s perfect run.

Thing is, there are no creative differences that need to be addressed in this one. You learn all you need to know in two hours of watching Jalen Suggs slice and dice in the halfcourt, Corey Kispert knock down 3s from the wing with pinpoint accuracy and Drew Timme flex all over everyone.

They’re not making this movie alone. UCLA went from limping into the First Four with four straight losses to the Final Four, and Johnny Juzang has cemented his place on the walls of Westwood with a tourney performance that’s been superhero-worthy. Baylor finally got over the hump in Scott Drew’s 18th season, making it to the sport’s biggest stage for the first time since 1950. Houston’s here for the first time since the Phi Slama Jama days of the early 80s, and Kelvin Sampson is improbably back at the precipice of coaching greatness after a career that seemed dead in the water a decade ago.

Those are nice stories, but make no mistake: Those are secondary plots to the blockbuster that’s invading Lucas Oil Stadium this weekend.

Welcome to the Gonzaga Invitational.

The beauty of a single-elimination tournament and the very essence of what makes March Madness hum is the unpredictability. Draw a bad matchup and it’s over. Go cold from outside at the wrong time and the NCAA will wake you up in the middle of the night and send you home.

We’ve seen it all come crumbling down for some teams that we thought were sure things to finish their pursuit of perfection. Kentucky picked a bad night to get destroyed on the glass and Wisconsin got hot from beyond the arc in knocking off the 38-0 Wildcats in the 2015 Final Four. UNLV, 34-0 heading into the 1991 Final Four, ran into a budding Duke dynasty that wanted revenge for a 30-point title game loss a year earlier.

Those things could happen to Gonzaga on Saturday or Monday night. But it’s hard to believe they will.

The Bulldogs are plus-96 through their four tournament wins, covering sizable spreads each round. They enter the Final Four with the largest combined victory margin since Rick Pitino’s 1995-96 Kentucky squad was plus-113 heading into the national semis. Few’s team has a legit shot at finishing with the most dominant winning margin since the tourney expanded to 64 teams in 1985.

Those Pitino Wildcats were also the last team to be favored by a margin as large as Gonzaga (currently -14 over UCLA) in a Final Four setting. They were 14-point favorites against Syracuse heading into the ’96 championship game (and failed to cover, winning 76-67).

Gonzaga has the best 2-point percentage in college hoops history, shooting an obscene 63.7% (it also has the best eFG%, 61.0, since that stat became available). The Bulldogs just torched USC, the nation’s No. 2 2-point field-goal percentage defense (42.1) by making 57.7% of their looks from inside the arc in the Elite 8.

What kind of 2-point defense might they find in Indy? One other good one and two … less so.

UCLA is the first team in tournament history to win four games in which it’s been outshot. There’s a better chance that Jason Kapono will be granted his 17th year of eligibility before Saturday than that happening again against Gonzaga.

The Bruins have taken care of the ball (just 36 turnovers in five games), but if you’re going to stand a chance against Gonzaga, we believe there are two factors that have to go in your favor: 3-point shooting and forcing turnovers.

UCLA doesn’t fit the bill for either. Mick Cronin’s team is 291st in the nation in 3s attempted, so it lacks the variance to keep up in a game that will likely be much faster than the Bruins’ preferred slow tempo (they’re 338th in adjusted tempo, per KenPom, while the Zags are sixth). And UCLA is 278th in turnovers per game forced (11.8). If you can’t find some extra offensive possessions against Gonzaga, goodnight and good luck.

On the other hand, we have Baylor. Folks have been salivating all season at the possibility of a Bears-Bulldogs title game, and should we get it, there’s reason to believe Baylor can compete.

Drew’s team shoots the 3 (41.1%) better than any team in the country and at a high enough volume (24.2 per game, 67th) that taking a few extra shots beyond the arc won’t be out of their rhythm. All three of Baylor’s star guards, MaCio Teague, Jared Butler and Davion Mitchell, hit at least 39.6%.

On the other end of the floor, the Bears are third in the nation in turnover percentage. Throw in college hoops’ seventh-best offensive rebounding percentage (36.6 – Houston is second at 39.8) and there’s hope for creating the extra chances you’ll need to stay on the floor with Gonzaga.

It felt good to have the tournament back after the pandemic forced the Big Dance to the sidelines in the spring of 2020. With three overtime games on the first day of the first round and five games decided by five points or fewer the next, the thrill and the rush of the chaos only March Madness can bring was back.

Things haven’t been as competitive since. From Day 2 of the second round on, the average margin has been 13.5 points and even some of the close games – we’re talking about you, UCLA-Michigan – haven’t exactly been ones you’ll be telling your grandkids about.

Gonzaga has been bulletproof all season, and even when a team seems like it can match up in certain areas – USC’s interior defense and likely top-2 draft pick Evan Mobley, for instance – the game tends to go sideways quickly.

The Bulldogs’ sure things are too certain. Timme is rarely in foul trouble and has a special touch once he gets to his spots down low. Suggs doesn’t care if he’s the focal point offensively, but he’s in complete control with the ball in his hands – and if he does need to take over, you better believe this future top-5 pick will be eager to show he can. Kispert has become such an effective slasher and two-way force that he can be impactful even if his 3s aren’t falling.

Gonzaga has won 27 consecutive games by double digits since an 87-82 victory over West Virginia on December 2. If that seems nearly impossible, that’s because up until now, it has been. No other team in Division I history has done it.

Three days after what turned out to be the Bulldogs’ closest call, they were scheduled to play Baylor in a 1-2 showdown at Bankers Life Fieldhouse in Indianapolis. The game of the season was called off due to two positive COVID-19 tests within Gonzaga’s traveling party. In a statement, both schools said they’d attempt to reschedule the game at a later date.

It never came to fruition, but fate might make it happen four months later to the day, four blocks away in the same city.

Houston and UCLA will have something to say about that Saturday. But in a season where nothing felt normal except for the two juggernauts at the top, it’s the title game we deserve.

Since bracket seeding began in 1978, we’ve had eight championship games pitting two top seeds. Take a look at the list and try to find a dud. I’ll wait.

OK, so Florida-Ohio State was a bit of a snooze, but still. All single-digit margins! Overtime! Phantom timeouts! Chalmers! MJ!

Gonzaga-Baylor feels like it has the chance to be as special as some of the games on this list. For a team that could be trying to finish off one of the most spectacular seasons in NCAA history, it’s only fitting that we get a chance to find out.