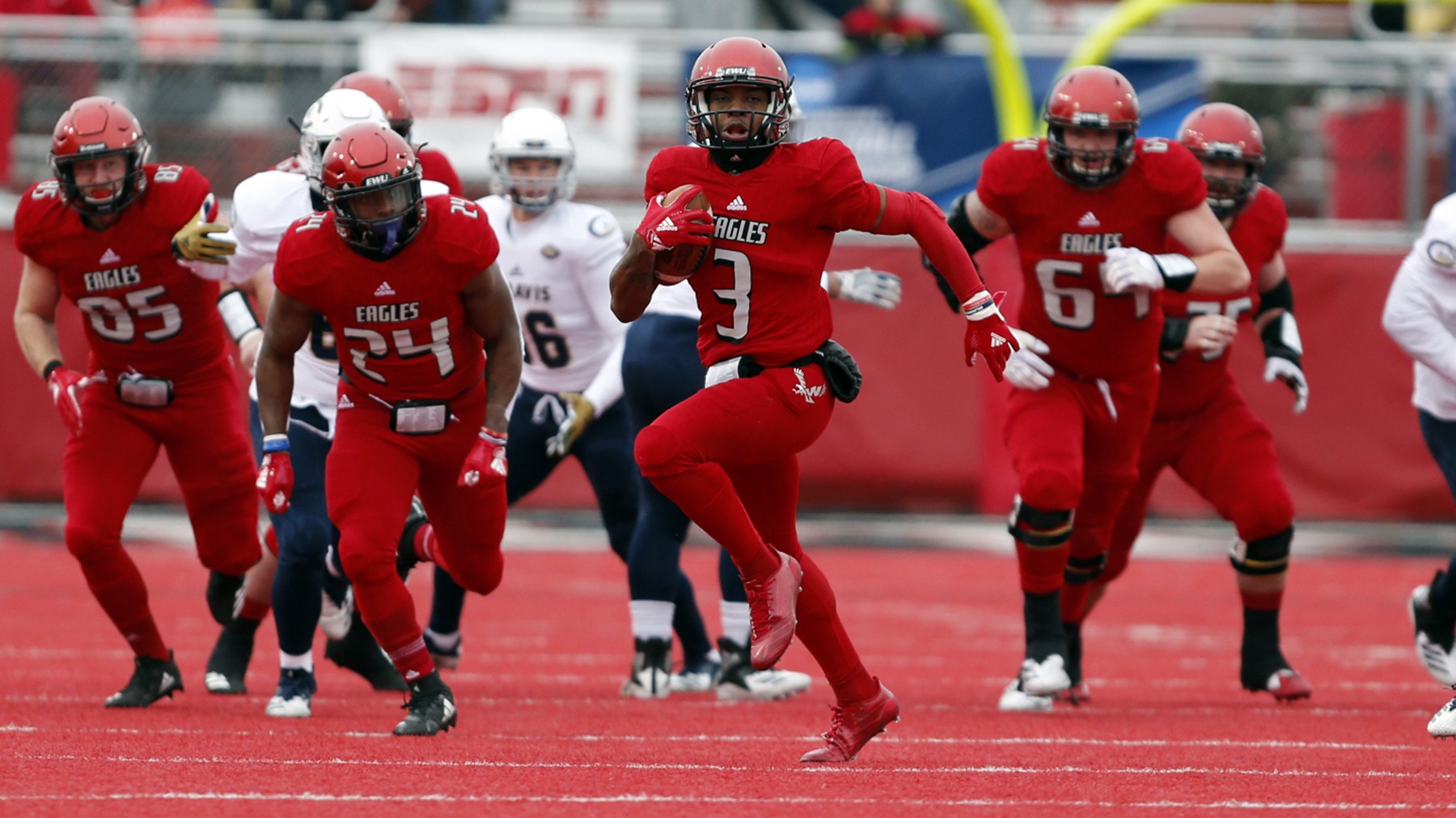 Fifty isn’t necessarily fabulous within the FCS spring college football season after it reached that dubious milestone this week for season-long postponements and cancellations due to COVID-19 issues.

The good news is, conference play has been so terrific that there’s been a seemingly endless number of big games each week even amid lost matchups. April’s arrival moves teams into their stretch-drive of the regular season and closer to conference titles and postseason berths.

First place is at stake in the CAA South Division. James Madison has won six of the last seven meetings to take a 19-18 series lead, averaging 55 points in its last three trips to Richmond and setting series marks for points (63) and margin of victory (53) in the 2018 visit. While the Dukes have a decision to make at starting quarterback between Cole Johnson and Gage Moloney, the game’s most interesting matchup is their CAA-leading rushing attack (259 yards per game, 13 touchdowns) against a stout Richmond rush defense (58 yards allowed per game on just 2.3 yards per carry). Richmond may need a fast start because JMU has allowed just 11 first downs and 142 total yards in the second half of games this season. Spiders QB Joe Mancuso has been efficient, throwing two touchdowns and not turning the ball over in each win. In the four-year Russ Huesman era, the Spiders are 13-5 when committing one or no turnovers, but 5-14 with multiple miscues. They’re 0-4 all-time against No. 1-ranked teams.

Unranked in its FCS history until three weeks ago, VMI has been one of the best stories of the spring season – if not the best – but ETSU is lurking behind in second place in the SoCon standings. With VMI’s all-time passing leader Reece Udinski lost to a season-ending ACL tear, Seth Morgan stepped in to direct a last-minute win at Wofford last Saturday, producing the third-most yards of total offense (449) in program history and throwing three of his four TD passes to Jakob Herres, the national offensive player of the week who’s caught 29 passes in the last two games. All four ETSU games have been decided by seven or fewer points. The Buccaneers will test the VMI offense, ranking second in the conference in scoring defense (18.0 ppg), total defense (281.5) and rushing defense (116.5) and third in passing defense (165.0 ypg). Running back Quay Holmes ranks in the top 10 of the FCS with 29 touchdowns since beginning his career in 2018, and he’s fourth among active players.

Despite equaling the FCS record for consecutive league wins (39), six-time defending champion San Diego trails Davidson in the Pioneer Football League standings. The last time they met in San Diego in 2018, Davidson racked up a Division I single-game record 789 rushing yards yet lost 56-52. Both teams are keeping it close in the spring season as well – all of their games have been separated by seven points or less in the fourth quarter. To say San Diego QB Mason Randall is finding his targets is an understatement. He leads the FCS in completion percentage (74.0, 74 of 100) and has more interceptions (five) than TD passes (four). Allowing just 237.5 yards per game, the Toreros are on a PFL-record pace, but Davidson’s offense should prove challenging. QB Tyler Phelps is making his 34th career start and directs an option that ranks No. 1 in the FCS in rushing yards per game (307.8).

If this feels like an FCS playoff matchup, it basically is given the fewer spots to go around this spring and four Big Sky teams still in the picture. Eastern Washington has won all eight previous meetings, most recently 34-29 on a last-minute touchdown in the 2018 national quarterfinals. The host Eagles are racking up 583.8 yards per game (second in the FCS to UIW) and 43.5 points per outing (fifth). QB Eric Barriere is running the ball less and throwing it more, with three games of 49 or more attempts – all the highest in a career in which he has thrown for 69 touchdowns and rushed for 17 more. UC Davis can play tag-team with running backs Ulonzo Gilliam, who missed the Idaho State game last Saturday, and Lan Larison, who earned the Big Sky offensive player of the week award following that win. There are a couple of powerful legs in the matchup with EWU’s Seth Harrison coming off a 55-yard field goal against Cal Poly and UC Davis’ Daniel Whelan averaging 51.3 yards on 11 punts.

Deion Sanders’ marketability has led to this game landing on ESPN. True to form, it’s a prime-time matchup between two programs meeting for the 66th time (but it’s the only spring matchup between two SWAC programs that’s not a conference game). Southern has won the last seven meetings, although most recently in 2019, Jackson State produced its second-most offensive yards (532) and third-highest point total (34) since 2002. In two career games against JSU, Southern QB Ladarius Skelton has done more damage running the ball (260 yards, four TDs) than passing it (194 yards, two TDs).  The matchup boasts dominating defensive players with Southern defensive end Jordan Lewis (6.5 sacks) and Jackson State linebackers Aubrey Miller Jr. and Keonte Hampton (37 tackles each). The atmosphere at JSU is always lively with Sanders, the Tigers’ first-year coach, but the 50 percent capacity that is being allowed at Mississippi Veterans Memorial Stadium could lead to JSU matching its FCS-high attendance (22,000 against Mississippi Valley State).