Declan Rice: Holding out for a Hero | The Analyst 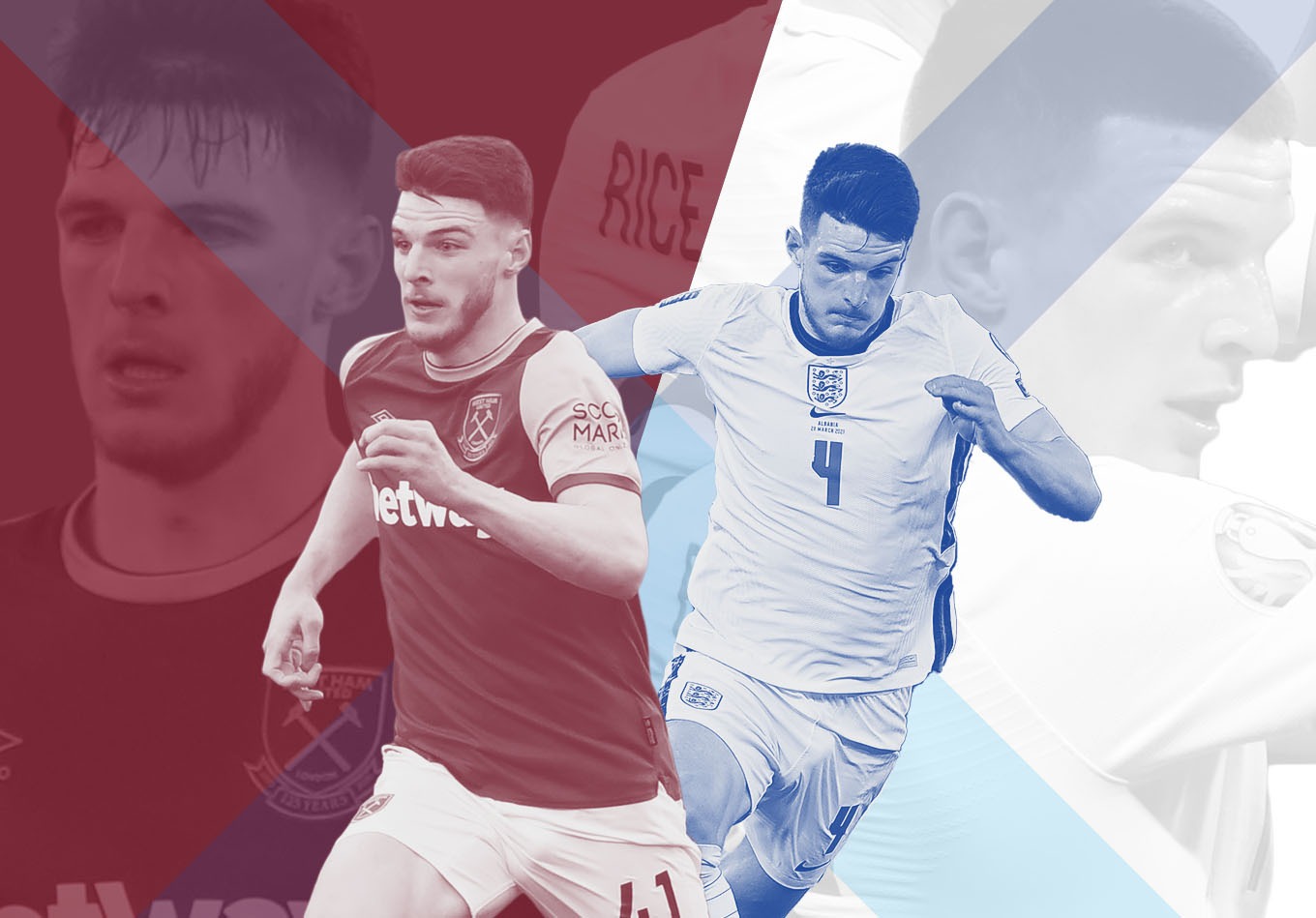 Declan Rice: Holding out for a Hero

Declan Rice has become the cornerstone of a West Ham United side challenging for Champions League football next season, and has become a fixture in England’s team ahead of the European Championship. Have England finally produced the all-action, multifunctional holding midfielder they needed?

England have traditionally had a difficult relationship with holding midfielders. Despite the vast rise in foreign imports over the last two decades, they’ve produced world-class players in almost every position: David Seaman as a goalkeeper, Gary Neville and Ashley Cole as full-backs, John Terry, Rio Ferdinand and Sol Campbell as centre-backs, Steven Gerrard and Frank Lampard as central midfielders, Alan Shearer and Wayne Rooney as forwards. But in defensive midfield, none of the Premier League’s best – a rough top three would be Roy Keane, Patrick Vieira and N’Golo Kante – have been English.

To some extent, that speaks of a historic unease at multifunctionality in the position. While other countries were producing defensive midfielders who saw tackling and progressive passing as mutual inclusives, English football had an archetypal image of the holding midfielder as gnarly, no-nonsense tackler and expected little else. As Nobby Stiles told the Guardian, “My job was to win it, give it to Bobby [Charlton] and let him get on with it.” That legacy persevered.

The best modern exception to that rule was Owen Hargreaves, but he fought against a swell of negative connotation throughout his international career and received only 42 caps. Hargreaves was injured midway through the 2002 World Cup, was left on the bench during Euro 2004 and was then named as England’s best player in 2006. The abiding image of England’s 2010 World Cup campaign was Germany exposing England on the counter attack while a central midfield pairing of Frank Lampard and Gareth Barry struggled to cope and left the defence exposed.

Hargreaves was not of the level of Keane, Vieira or Kante, but his multifunctionality hindered rather than helped his reputation (and it is instructive that he developed outside English football). Michael Carrick was another who suffered through the inability to pigeonhole him into our specific notion of what a holding midfielder should look like.

When David Moyes returned to West Ham in December 2019, he did so with a remit to create a team in his own image. After several years of wanton transfer market spending on expensive attacking imports whose relative failure hung around the club’s neck, Moyes believed that only by pursuing a defined ethos could West Ham move forward.

Central to that plan was to assemble a group of players for whom attacking quality would only be welcomed if it was accompanied by the grit and resilience that Moyes had engineered so successfully at Everton. Sebastien Haller and Felipe Anderson have left; Andriy Yarmolenko and Manuel Lanzini have started four league games between them this season.

In their place, a Moyes-eque group of key players has emerged. Tomas Soucek and Vladimir Coufal are two of the best signings West Ham have made in recent memory. Craig Dawson’s arrival was widely derided but has proved a masterstroke. Jarrod Bowen and Michail Antonio are two of the hardest-working attackers in the division.

But no player is more important than Declan Rice, not least because he is the poster boy of West Ham’s academy following the controversial sale of Grady Diangana last summer. For all the understandable excitement over England’s plethora of attacking options, it is Rice who may be the most important young player in their Euro 2020 squad. Having turned 22 in January, Rice has already made 115 Premier League starts, captains West Ham in Mark Noble’s absence and has only missed one competitive match for England since November 2019. That was the 5-0 against San Marino for which Harry Kane and Harry Maguire were also rested.

The first thing that defines Rice is the consistency of his availability. Since Oct. 1, 2018, no outfield player in the Premier League has played as many minutes and no midfielder comes close. Rice has missed 101 of West Ham’s last 8,820 Premier League minutes.

If West Ham’s new mood is built upon anything in particular, it is the energy of their central midfield pairing. Ranking all Premier League players by their distance covered this season sees Soucek top the list but Rice also ranks fourth, comfortably the highest for any holding midfielder. Whereas Noble lacked the legs to play in a box-to-box role (and Rice hardly does that), the partnership have built up an understanding that Rice spoke at length about recently: When one goes, the other stays.

Ostensibly, Rice is a defensive midfielder. Using the N’Golo Kante Index™ – tackles plus interceptions – sees Rice rank fifth of all midfielders in the Premier League this season on 113 behind Kante (obviously), Ruben Neves, Yves Bissouma and Pierre-Emile Hojbjerg. Rice’s total would probably be higher (he ranked second last season behind Wilfred Ndidi) but for Soucek’s assistance in sharing the load. Between them, Rice and Soucek have made 217 tackles and interceptions ­– no pair of Premier League midfielders get close.

That figures. Like Eric Dier – who Rice replaced as Gareth Southgate’s first-choice holding midfielder – Rice trained as a central defender before stepping forward. But, unlike Dier, we should not missell Rice as a purely defensive player. In an interview with Sky Sports after West Ham’s 2-0 win over Leeds, Rice was asked by Jamie Carragher about his appetite for driving forward with the ball. Rice name-checked Patrick Vieira – no surprise there – but also Yaya Toure, who strikes as a completely different type of midfielder.

He spoke about this on West Ham’s official website.

“I saw the space and I’ve seen Marcus [Rashford] on the inside and I thought, ‘Do you know what, keep going, there’s no point turning back,’ and Marcus had a great shot out of it and was unlucky not to score. It’s definitely something I’ve been trying to add to my game, breaking forward. Definitely.”

If Rice’s determination to improve his progressing running suggests an appetite to become part of a new breed of English holding midfielder, passing range must become a part of his armoury. Rice is hardly mediocre by those standards – he ranks behind only Rodri, Georginio Wijnaldum, Granit Xhaka and Hojbjerg for pass completion of Premier League midfielders this season.

The accusation against Rice is that he is merely a ‘safety net’ passer, namely one that wins the ball and immediately gives it to someone else to do something more progressive. But the data suggests that that is more than a little unfair. Firstly, Rice’s long pass completion rate is only a fraction lower than Kante’s (and 7% lower than Rodri’s). But Rice’s long passes also account for 8.3% of his total passes. That percentage is higher than Kante and the four midfielders (Xhaka, Rodri, Wijnaldum and Hojbjerg) mentioned above.

Our player sequence data records the expected goals for moves that started with a particular player, and Rice ranks fourth in the Premier League by this measure. In itself that doesn’t prove anything (a player might play a simple pass to someone who provides the magic), but combined with Rice’s comparatively high percentage of longer passes it suggests that Rice is either winning/receiving the ball higher up the pitch and/or that he is picking the right passes. On that list, Rice is behind Kante, Rodri and Youri Tielemans.

Rice is not yet the complete holding midfielder. There remains an occasional flaw in his positioning and his decision making. He is not yet an exceptional passer of the ball. If he could improve one natural talent it would be his speed (his fastest sprint this season is almost three km/h slower than Ndidi and Bissouma).

But Rice has certainly developed. It’s only 16 months since Roy Keane was asked for the areas in which Rice (who had by then chosen against representing Keane’s Ireland) could improve and replied with a typically pithy, “Where do you want me to start?” Rice “started” by aiming to improve his usefulness in instigating moves with passes and dribbles that could subvert our typical expectations of a domestic holding midfielder.

For West Ham, Rice’s development has engineered a domestic season that is on course to return their highest top-flight points total since 1986. The summer will bring predictable links with England’s financial elite and Rice may well believe that this is the right summer to push for that move; Manchester United are a very obvious fit.

Before then, Rice has a chance to cement a place at the base of England’s midfield and enjoy (if that’s not a pipe dream for England) his first major international tournament. A year ago, Jordan Henderson’s lingering injury issues would have caused great panic amongst England supporters. Now there’s far less reason to be afraid. They finally have the progressive, multifunctional – if still imperfect – holding midfielder they’ve needed for the last decade.