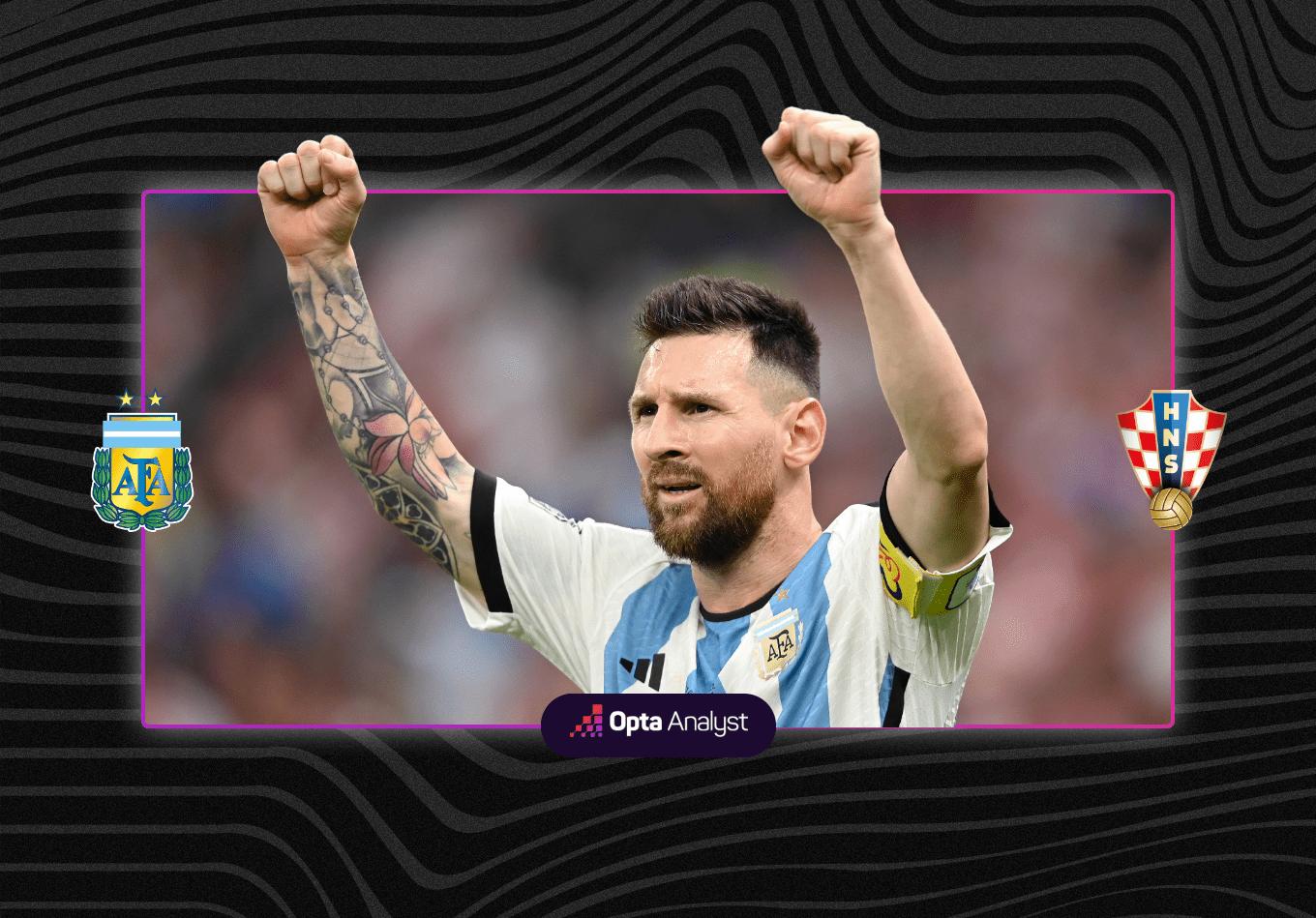 Argentina 3-0 Croatia: Lionel Messi is One Game From Immortality

At points this World Cup has seemed like an elaborate film set built around Lionel Messi’s last great mission: to become a world champion at 35. Even Argentina’s opening-game defeat to Saudi Arabia feeds into it: a little drama in the first scene, a popular character dispensed with in the first act, before the slow recovery in the other group games and the gathering storm in the knockout stages. The quarter-final with the Netherlands was the sort of bloodbath HBO would pay decent money to broadcast across nine episodes, but tonight Messi and Argentina faced the most difficult character in the series, the surprise protagonist of the previous season: Croatia. Seven of tonight’s starters also started in their meeting in the group stage at World Cup 2018: three for Argentina (Messi, Tagliafico and Otamendi) and four for Croatia (Modrić, Perišić, Brozović and Lovren). One player who was just 16 during the 2018 World Cup – Joško Gvardiol – was tasked with stopping Messi. It was a significant plot in what promised to be a classic penultimate episode of the season.

The early stages were as we expected, as cagey as a property programme for budgerigars. There was a grand total of one shot, from Dejan Lovren, in the opening 20 minutes, so the sight of Messi repeatedly manipulating one of his hamstrings instantly contained significantly more drama. Argentina’s first shot came in the 25th minute, an Enzo Fernández fizzer, saved by Dominik Livaković.

One of the stories heading into this game was the form of Livaković at saving penalties, with four from eight in shootouts so far in this World Cup, so maybe he fancied a little warm-up, after being correctly adjudged to have fouled Julián Álvarez, engaged on a youthful tear from an Argentina counter-attack. Penalty save maestro against the inconsistent-from-12-yards Lionel Messi? No bother for football’s main character, who rolled home another goal that, inevitably, triggered about a thousand new records.

Perhaps most nostalgically, Messi became only the sixth player to score in each of the last 16, the quarter-final and the semi-final since the round of 16 was introduced in 1986. He joins Toto Schillaci in 1990, Roberto Baggio and Hristo Stoichkov in 1994, Davor Suker in 1998 and Wesley Sneijder in 2010. Football history experts will note that none of those previous five footballers went on to win the World Cup in that year.

Argentina were 1-0 up but still weren’t playing brilliantly. No matter, another counter-attack five minutes later saw Álvarez through on goal to score one of the most brilliant yet bumbling goals in World Cup history, with Borna Sosa putting in one of the most sliced attempts at clearing the ball the entire sport has ever seen, allowing Álvarez to bundle home. He thus became only the second Argentina player under 22 to score 3+ goals at a World Cup after Gonzalo Higuain in 2010. Pep Guardiola had predicted that the Manchester City forward would play a big role at this tournament and, as usual, it seems he knows what what he is talking about.

The game reached the halfway point with Messi two goals up and blissfully unaware that some people would spend the statutory 15-minute period arguing that Argentina’s penalty should not have been given.

Even Croatia have to roll the dice at 2-0 down, so made two changes at the break, bringing on Mislav Oršić and Nikola Vlašić, followed by Bruno Petković for Marcelo Brozović five minutes into the second half. Croatia in all-out-attack mode? Not quite, but not far off, albeit that the removal of Brozović – the match’s leader in touches to that point – opened up some productive channels for Argentina, such as the first good chance of the half, which fell to Messi, who, after some good interplay, thumped a shot on target from the left hand side of the six-yard box. Hamstring watch: seemed OK but maybe give him a rest ahead of the final?

Okay, perhaps not yet.

Because in the 69th minute Messi rolled back the years, making Joško Gvardiol wish he was still a maskless 16-year-old watching the World Cup on television, dancing into the box in a low-pace/high-impact fashion, and assisting Álvarez for his second and Argentina’s third. It was the sort of assist that justifies the hype and the hagiographies but also makes you wish that Diego Maradona’s career had been shown in 4K.

That Argentina goal all but broke Croatia, and the closing stages were played out in that celebratory-haze a three-goal lead brings you, the partisan Argentina-supporting crowd soaking up their side’s path to a sixth final, Messi’s second. Croatia’s all-time great, Luka Modrić, was substituted off, undoubtedly one of the outstanding players of this generation but reduced to a bit-part role in the presence of sporting deity. Argentina are not a one-man team – no side has conceded fewer shots in their six games before the final (1986 onwards) than this Argentina – and even Messi can’t claim credit for that level of defensive solidity. But it is a one-man story right now, outside of Julián Álvarez’s family WhatsApp group.

In the end, this was Lionel Messi’s night, just as it has been his era and his world for more than 15 years. The one question that remains, though: is this his tournament?