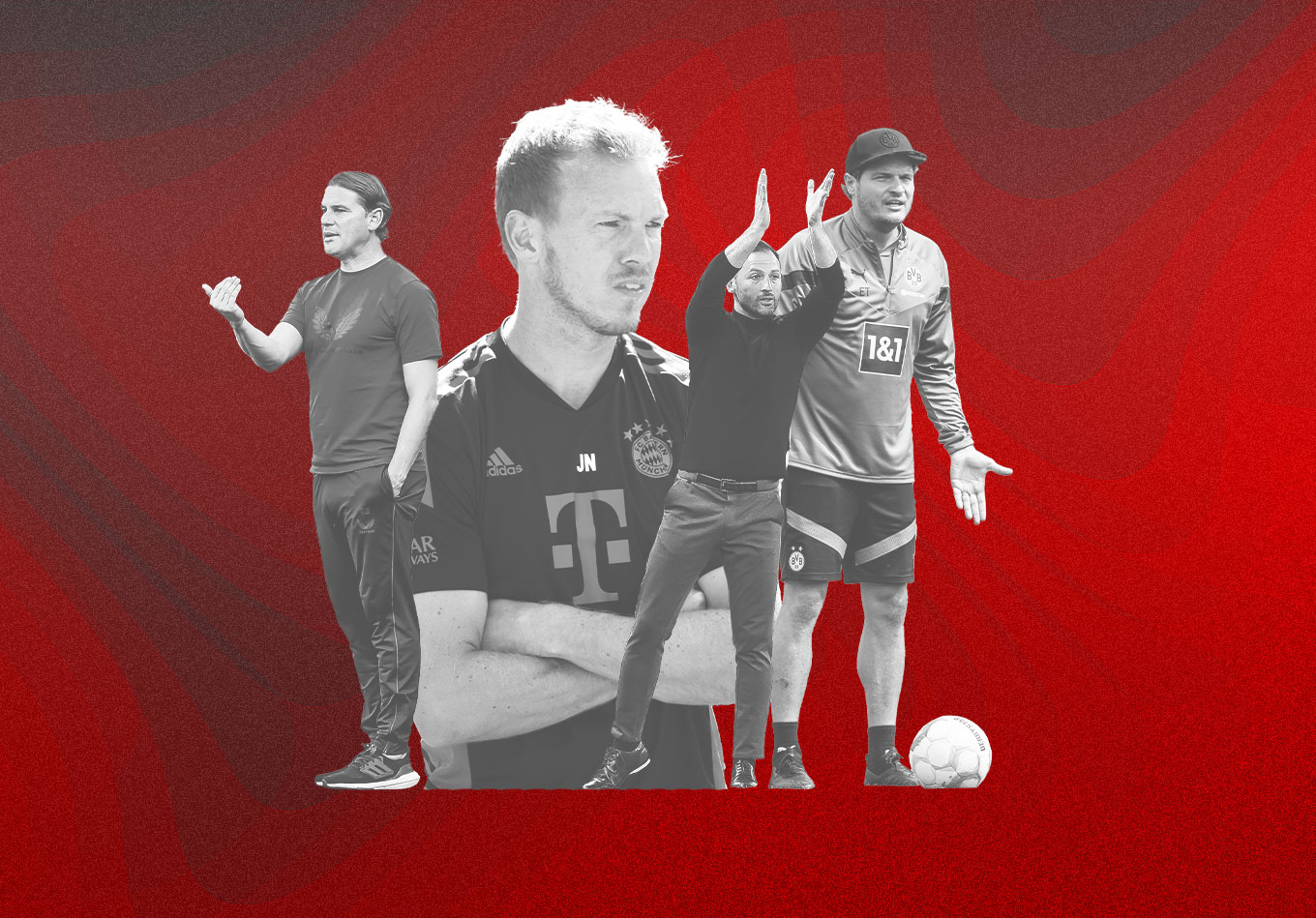 The key difference was Lewandowski, who went from one of the world’s best strikers to, perhaps, the best player on the planet. In the five seasons from 2014-15 until 2018-19 inclusive, he scored at an incredible rate of a Bundesliga goal every 102 minutes, or every 117 without penalties. It’s a world class record. Then, over the last three seasons, he got even better. Across his last three Bundesliga campaigns, the Pole found the back of the net every 74 minutes he was on the pitch, or every 89 minutes if you want to take his penalties out of the equation.

That’s right, over the past three seasons, Lewandowski scored a Bundesliga goal every 74 minutes he was on the pitch. And now Bayern Munich have to find a way to do it all over again without him. Does that open the door and, if it does, is anyone in the position to squeeze through it?

As soon as you talk about Bayern Munich leaving the door open, you have to talk about how well-placed Borussia Dortmund are to take advantage. After years of half-committing to a transitional season, Dortmund have gone all in this summer.

In one way they had no choice: the sale of Erling Haaland means the entire attack will have to be rebuilt. The good news there is that he missed a lot of football in 2021-22, starting just 21 of 34 Bundesliga games, and Dortmund were not that much worse when he was not on the pitch.

There have still obviously been significant efforts to bolster the attack after a new club record for goals in a single Bundesliga campaign was set. Karim Adeyemi, featured in our 50 players to watch this season, enjoyed a breakthrough with RB Salzburg last term, forcing his way into Hansi Flick’s Germany plans with impressive performances in the league and Champions League. How quickly he settles in a better league is the big question, but the 20-year-old offers incredible pace that should suit Dortmund’s game and lead to plenty of chances against high-pressing Bundesliga sides.

Another forward is also likely to arrive given the uncertainty surrounding the health of fellow arrival Sébastien Haller.

But even more important is that Dortmund improve in defence, and there have been huge efforts to make that happen. Marco Rose parted ways with the club and former interim boss Edin Terzić comes in permanently and with a new-look defence.

That shouldn’t come as too much of a surprise after BVB conceded 52 goals in the league in 2021-22. Of the last 24 seasons, they’ve only conceded more once, way back in 2007-08. That, and a couple of reality checks in Europe, inspired the club to bring in two new centre-backs and a new defensive midfielder. Nico Schlotterbeck and Niklas Süle are both incredibly imposing figures, two of the best defenders in the league last season, while also offering more in possession than their new Dortmund team-mates.

Nico Schlotterbeck was also an absolute terror in the air last season, registering the best aerial duel win percentage of any defender in the league.

Those two will have Salih Özcan ahead of them, arriving from Köln after an impressive season playing for a gung-ho team coached by Steffen Baumgart.

Dortmund may not score as many without Haaland, and it will be down to Terzić to tease more end product out of Marco Reus and Donyell Malen as well as finding a way to best use Adeyemi, but fixing the defence should be a much easier task and, if Dortmund manage that, there’s every chance they are well placed to attack Bayern.

It is hard to say the same of Bayer Leverkusen, whose season really rests on whether or not Patrik Schick can replicate his superb form last time out. Gerardo Seoane’s first year at the BayArena was an impressive one and the team should be good again this year after tying Schick and Florian Wirtz to new deals as well as keeping hold of Moussa Diaby.

There are few worries that Leverkusen will win a lot of games. Last season they created 96 big chances — more than BVB — and had 49 fast breaks, the most in the league. An ACL tear for Wirtz back in March will probably see him miss the first half of the campaign and the World Cup, though, and that will seriously hurt the team. The attacking midfielder’s decisiveness and selflessness was crucial last season, as he rarely made the wrong choice in key moments.

Wirtz’s season ended prematurely with a goal or assist every 110 minutes in the Bundesliga and Leverkusen, a fairly conservative side by the Bundesliga’s standards, will struggle to consistently hit top form without him in a system that doesn’t press high but relies on clean technique and precise decision making to create opportunities.

The other side that could be in the hunt is RB Leipzig, who have also kept hold of their superstar from last season. If Christopher Nkunku can have another season like his last, well, never say never.

The issue with Leipzig is that the numbers suggest they weren’t that much better under Domenico Tedesco than under Jesse Marsch, who was fired after less than half a season in charge. The two managers have incredibly different styles and it’s fair to say Tedesco’s is better suited to the squad, with little happening for long periods but Leipzig’s quality making the important moments count. Under Marsch, a more end-to-end approach gave teams with less talent a puncher’s chance.

With Tedesco, the approach is slow, very slow, and careful, very careful.

This risk-averse approach relied on Nkunku to score almost every week but how sustainable that is remains to be seen. In total, 12 teams took more shots than Leipzig after Tedesco took over and there is no chance, even with Nkunku fit and firing, they could sustain a title challenge if that doesn’t change drastically.

And then there is Bayern Munich, who don’t have Lewandowski but do have Sadio Mané. The Senagelese arrives off the back of an extended spell playing up front for Liverpool at the end of last season and that’s certainly a role he could reprise.

Mané is well suited for playing through the middle, willing to lead the press and more than good enough, technically and physically, to hold the ball up. He plays unselfishly too, bringing others into play, and repeatedly showed his strength in the air during his time at Anfield.

There will be plenty of talk about Bayern finding enough goals without Lewandowski but, like Dortmund, they can also address the issue with improvement at the back. From the start of 2011-12 to the end of 2016-17, the club conceded an average of 20 goals per Bundesliga season. In the five seasons since that number has leapt to 34.6 goals conceded per season.

That is a massive jump and Lewandowski’s departure should help them correct it. The Pole, who turns 34 in August, has gradually been doing less defensive work and creating fewer chances for his team-mates in recent seasons.

For Nagelsmann defending begins from the front but he had to compromise on his usual approach last season as he took over from the popular Hansi Flick and a team built to serve a striker who has made a habit of scoring at an unprecedented rate in the Bundesliga.

Replacing him will be a challenge but also an opportunity for Nagelsmann to make this his team. His Bayern conceded as many last season (37) as Hoffenheim and Leipzig did in Nagelsmann’s first full seasons in charge of them. RB Leipzig conceded just 32 in his second season there and, across his two seasons at the club, Leipzig conceded fewer goals (69) and faced fewer shots (618) than both Dortmund and Bayern. Nobody should worry whether or not he can improve the defence, especially after signings have been made that should suit his favoured back three system.

Matthijs de Ligt’s move from Juventus means three of Bayern’s four biggest transfer fees have gone on three centre-backs and they are all in the current squad. De Ligt may well join Dayot Upamecano and Lucas Hernandez at the back as Nagelsmann looks to play all three.

In fellow new signing Noussair Mazraoui and Alphonso Davies, Bayern have two of the best offensive wing-backs in Europe, allowing them to dominate with more bodies centrally in midfield and the final third.

All signs point towards Bayern rebuilding to become a true Nagelsmann team this season. If it takes time, Dortmund will have to hit the ground running to take advantage. If it doesn’t, all signs ominously point towards an 11th title in a row for the champions.